Materials and Methods: In this prospective cohort study, HCV genotype 4-infected patients treated with OMV/PTV/r + RBV (n=55) who were registered in a national database were included. Study patients were treatment-naïve or interferon plus RBV-experienced with or without compensated cirrhosis. Demographic, clinical and virological data were analyzed. Details of clinical and laboratory adverse events (AEs) were recorded.

Conclusion: The OBV/PTV/r + RBV combination was found to have high efficacy and safety profile in the patients with chronic HCV genotype 4 infection.

About 170-200 million people are known to be infected with the hepatitis C virus (HCV) worldwide. Chronic hepatitis C (CHC) infection carries risks of hepatic fibrosis, cirrhosis, portal hypertension, liver failure, and hepatocellular carcinoma (HCC) (1-4). Chronic HCV infection is an important health problem in Turkey (5-10). In Turkey, among HCV infections, genotype 1b was reported to be the most common one (90%), while types 2, 3, and 4 exist, with lower prevalence. However, recently, there has been an increase in HCV genotype 4 infections in Turkey (9-13). Two studies from Kayseri reported an unusually high proportion of genotype 4 infections reaching up to 35% among the patients, who were admitted to the hospitals for treatment of CHC (14, 15). This high proportion was significantly higher than the average prevalence of 1.4% reported for type 4 HCV infections in Turkey (15). It was shown recently that Kayseri genotype 4 isolates were closely related to subtype 4d sequences (13, 16).

There are several different treatment approaches for HCV genotype 4 infection. By the combination therapy of pegylated interferon (PegINF) and ribavirin (RBV), the sustained virological response (SVR) rate was 60% in patients infected with HCV genotype 4 (17). First-generation protease inhibitors in combination with PegINF and RBV achieved low rates of response in the patients infected with HCV genotype 4, and these regimens were characterised by less favourable safety profiles, which affect adherence to the PegINF-based therapy (7, 11, 12). The novel INF-free second-generation direct-acting antivirals (DAAs) therapy consisting of ombitasvir (OBV)/paritaprevir (PTV)/ritonavir (r) ± dasabuvir (DSV) ± RBV improved the efficacy, safety, and tolerability of the treatment of chronic HCV infection. This combination has also proved effective not only in genotype 1 but also in genotype 4. Patients with genotype 4 infection were recommended to be treated with the combination of OBV/PTV/r + RBV, which also resulted in high SVR rates in clinical and real-world trials (18-22). Three of these medications target HCV at different phases of the viral life cycle. Two of them were protease inhibitors: OBV inhibits viral NS5A phosphoprotein, which was involved in virus assembly and PTV inhibited viral NS3-4A serine protease involved in proteolytic processing. Furthermore, ritonavir enhances the pharmacokinetic properties of PTV, increasing their availability through improved drug exposure (23). We aimed to assess the efficacy and safety of OMV/PTV/r + RBV combination in genotype 4 infected patients in real clinical practice.

The patients older than 18 years, with chronic HCV genotype 4 infection, treatment-naïve or previously treated with PegINF/RBV, and chronic hepatitis or compensated cirrhosis were included in the study.

The patients with genotype non-4 HCV infection, decompensated liver cirrhosis with Child-Pugh class B or C, evidence of HCC, a concomitant medication that was contraindicated according to manufacturer’s recommendations, current pregnancy, lactation, and platelets count <25.000/mm3 were excluded.

Data were collected through a National Registry under the auspices of the Study Group for Viral Hepatitis of the Turkish Society of Clinical Microbiology and Infectious Diseases. All of the subjects provided the written informed consent for treatment. The study recorded data from all patients chronically infected with HCV genotypes 4 undergoing treatment with OMV/PTV/r + RBV in 11 Turkish centres between April 1, 2017, and August 31, 2018. We included data from 55 patients in the analysis. The follow-up period was 24 weeks. The Ethics Committee for Clinical Research of Kocatepe University approved the study with the number of 2017-4.

We collected effectiveness and safety data at different time points, both during treatment and after treatment completion.

The patients received two tablets of OBV/PTV/r (Viekirax 12.5 mg /75 mg /50 mg per tablet; Fournier Laboratories Ireland Limited Anngrove, Carrigtwohill, Co.Cork Ireland) once a day. The RBV dose, when administered, was weight-based (<75 kg, 1000 mg/day; >75 kg, 1200 mg/day). The patients were treated with OBV/PTV/r + RBV for 12 weeks. In the case of significant laboratory abnormalities at baseline [anaemia, thrombocytopenia or chronic renal failure (CRF)] treatment was started with a lower dose of RBV, according to product characteristics. The RBV dose was modified or discontinued in the therapy of patients who developed severe adverse events or laboratory abnormalities. If necessary, we modified the medications according to the drug interactions. In renal transplant recipients, the doses of tacrolimus were reduced according to plasma concentrations.

The primary endpoint of effectiveness was the achievement of SVR (HCV RNA undetectable or below detection threshold) at FU12. Secondary endpoints were the assessment of virological responses at 4th week (RVR, rapid virological response), at 8th week, and at EOT. Virological failure was defined as virological relapse (undetectable HCV RNA at the end of treatment, but positive within 12 weeks post-treatment), and non-response (HCV RNA was detectable at the end of treatment). Quantitative HCV RNA measurement was performed using various commercial real-time PCR quantification kits. The detection threshold was 12-25 IU/mL in the study centres.

The analyses were carried out on the per-protocol population, which comprises 55 patients. Histogram, q-q plots and Shapiro-Wilk’s test was assessed to test the data normality. A logarithmic transformation (base 10) was applied to HCV-RNA due to its highly skewed distribution. Levene test was used to test variance homogeneity. Mauchly’s test was used to test the sphericity. To compare the virological response distribution among non-cirrhotic/cirrhotic and type of treatment; either Pearson chi-square analysis or Fisher exact test was applied. Bonferroni corrected z test was used for multiple comparisons. To compare the laboratory parameters among follow-up time points, either a repeated-measures analysis of variance (ANOVA) or Friedman test was performed. Analyzes were conducted using TURCOSA (Turcosa Analytics Ltd Co, Turkey, www.turcosa.com.tr) statistical software. The statistical significance was set as less than 5%.

The demographic and clinical baseline characteristics were shown in Table 1. The mean age of the patients was 55.2 years, and 52.7% were male. The majority of the patients were non-cirrhotic, (81.8%) and 69.1% were treatment-naïve. The HCV RNA level was below 800,000 IU/mL in 16 cases. Liver biopsy was performed in 36 patients (65.5%). The fibrosis score was 1 or 3 in the majority of the patients. Compared to prior treatment responses, 47.1% of the patients did not respond, and 35.3% relapsed. Two patients had HIV, and one had HBV co-infection. The HBV DNA was negative in HBsAg positive patient before HCV treatment. 78% of the patients had an underlying disease. The most common comorbidities were diabetes mellitus (22%), cardiovascular diseases (20%) and CRF (20%). In 29.1% of the patients, concomitant medications were modified because of drug interactions. At the baseline, the mean values of ALT was 32 IU/L, AST 31 IU/L, bilirubin 0.73 mg/dL, albumin 4.14 g/dL, haemoglobin 13.91 mg/dL, platelet count 216 /1000 mm3 and INR was 1.

Out of the 55 analysed patients, 1 patient did not return for viral load follow up (FU) at 12th week, two patients stopped antiviral therapy because of AEs, and one patient died. Virological rates by the per-protocol analysis were calculated. FU12 data were available for 51 patients, among whom 50 (98%) achieved SVR12. HCV RNA was undetectable at treatment week 4 in 77.6%, at treatment week 8 in 100%, and at the end of treatment in 98%. 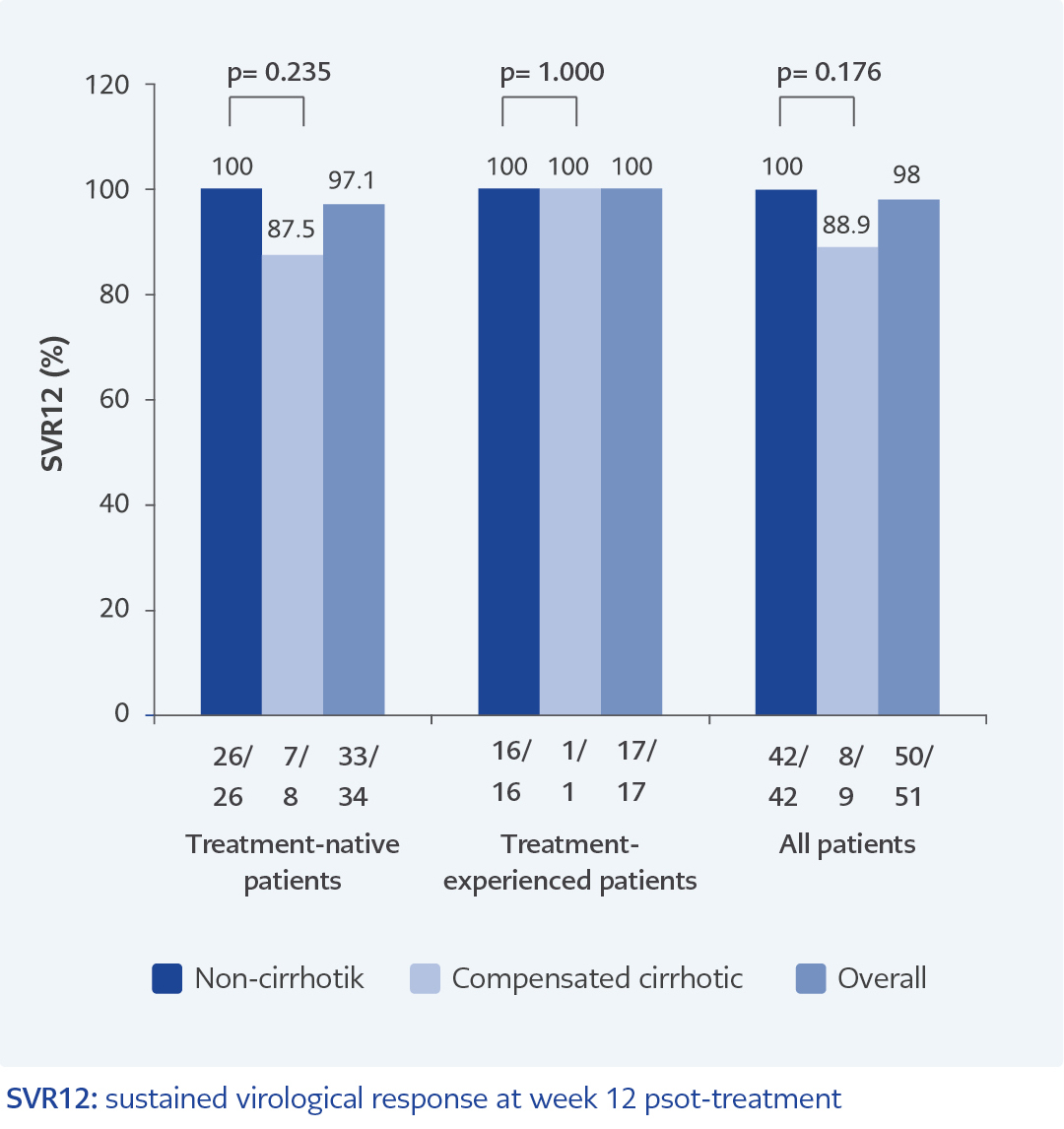 The rates of SVR according to the presence or absence of cirrhosis in treatment-naive or -experienced patients were shown in Figure 1. The SVR12 rates were 100% and 88.9% for those with or without compensated cirrhosis. (p=0.176). The SVR12 ratio in treatment-naïve and non-cirrhotic patients was higher than in compensated cirrhotic patients with no statistical significance (p=0.235). SVR12 rate in treatment-experienced patients was higher than in treatment-naïve patients, but the difference was not statistically significant (p=0.177). SVR12 was achieved in 10 of 11 patients (90.9%) with CRF. One patient died in this group. SVR12 was obtained in two patients (100%) with HIV co-infection and two patients (100%) with kidney transplant patients.

The differences between baseline and different time points during antiviral therapy were presented in Table 2. The mean ALT level significantly decreased from 32 IU/L at baseline to 16 IU/L after the four week of the treatment and to 15 IU/L at the EOT (p<0.001). The AST and haemoglobin values decreased from baseline to FU12 (p<0.001 and p<0.001). The platelet count increased in FU12 compared to baseline level (p=0.081).

Five patients (9.1%) failed to achieve SVR12. One patient did not respond to the therapy, One patient with CRF died at the 6th week of treatment, because of gastric bleeding unrelated to liver disease, two patients discontinued because of AEs and one patient was lost in FU. The patient with virological failure was treatment-naïve and had cirrhosis.

The most common AEs were asthenia (9.1%), fatigue (5.5%), and mild rash (5.5%) (Table 3). AEs were mostly mild and did not require medical intervention. Because of anaemia, RBV dose was reduction in four (7.3%) patients, and RBV was discontinued in one (1.8%) patient. Erythrocyte transfusion was performed in two (3.6%) patients. HBV reactivation was not observed.

Patients with HCV infection are at risk for progression to cirrhosis, transplantation, liver-related and all-cause mortality. The use of DAAs has considerably improved therapeutic outcomes for patients with chronic HCV infections. High SVR12 was achieved in treatment-naïve or -experienced patients with chronic HCV genotype 1/4 infections, including patients without cirrhosis or with cirrhosis who received OBV/PTV/r + RBV (18-20). Real-world evidence can provide insights into the effectiveness and safety of therapeutic regimens in broader patient populations and a more diverse clinical setting (25).

In our cohort, results demonstrate high SVR12 rates with OBV/PTV/r + RBV in all the patients irrespective of cirrhosis status or previous treatment history. In Turkey, HCV patients are managed by experienced clinicians in referral centres because of the national program for HCV treatment, which may result in better treatment adherence and higher response rates. A meta-analysis of 20 unique patient cohorts across 25 studies encompassing 5158 patients reported the overall SVR12 rates of 98.9% (95% confidence interval (CI): 94.2 – 100) in genotype 4 infected patients (25). SVR12 rates were consistently high irrespective of cirrhosis status or prior HCV treatment experience.

OBV/PTV/r ± RBV combination has demonstrated a very good safety profile in clinical trials (18-20). Rates of serious AEs and serious AE-associated discontinuation were 5.7% and 2.5%, respectively, in the study of Crespo J et al. (22). In our study, 69.1% of the patients reported at least one AE and most of the AEs were mild or moderate. The frequency of treatment discontinuation due to AEs was 3.6%.

Drug interaction is another important issue for OBV/PTV/r ± DSV ± RBV therapy. The routine medication was modified at baseline because of potential drug interactions in 16 (13.1%) patients in our cohort. In the study of González-Colominas E et al. (26), at least one potential drug interaction was reported in 62.1% of the patients and concomitant medication was modified before HCV treatment in 27.7% of the patients. Necessary modifications were made in concomitant medications on account of drug interactions, and the high success rate was obtained in patients with underlying disease such as kidney transplantation and HIV co-infection (27, 28).

In Turkey, DAA regimens are not easily accessible because of their high costs and the national legal restrictions for patients who will receive HCV treatment free of charge. The present study has some limitations. First, the number of patients compensated cirrhotic were relatively low when compared with many real-world cohorts. Second, the study was uncontrolled, retrospective, and there was no external monitoring of the collected data. Third, the quantification of HCV viral load and genotyping were conducted at several laboratories. Nevertheless, this study is of great value, as it is the report to reflect effectiveness and safety outcomes in real-life clinical practice in our country. Efficacy of OMV/PTV/r +RBV was very high in our cohort of patients with non-cirrhosis or compensated cirrhosis and with underlying diseases such as chronic renal failure, HIV, and transplantation.

Informed Consent: Written informed consent was obtained from the patients who participated in this study.