Objective:  This study aimed to evaluate bloodstream infections caused by Stenotrophomonas maltophilia in immunocompetent patients with respect to clinical features and risk factors for mortality.

Results: We identified a total of 97 patients with S. maltophilia bloodstream infections. Of these, 17 patients were excluded because of community-acquired infections (n=9), contamination with S. maltophilia (n=3), and insufficient data (n=5), with 80 (57.5% males) patients remaining for analysis. The source of infection was the respiratory tract in 28 (35%) patients. A central venous catheter was used in 60 (75%) patients, which required replacement in 23 patients within five days after detecting S. maltophilia bacteremia. On antimicrobial susceptibility testing, 71 strains were found to be susceptible and 9 (11.3%) resistant to trimethoprim-sulfamethoxazole. Thirty-day mortality was 33.8%. Non-survivors differed significantly from survivors with respect to higher rates of central venous catheters (p=0.020), mechanical ventilation (p=0.006), urinary catheters (p=0.021), septic shock (p=0.001), hypoalbuminemia (p=0.026) and thrombocytopenia (p=0.039). S. maltophilia bacteremia was independently associated with mortality in patients with hypoalbuminemia, and replacement of central venous catheters had a protective role in reducing mortality.

Conclusion: As with other bacterial infections, S. maltophilia bacteremia is associated with a considerably high mortality rate in patients with cardiac conditions. The replacement of the catheter seems to play a beneficial role in 30-day survival.

Stenotrophomonas maltophilia is a Gram-negative, non-fermentative aerobic bacterium that infects patients, especially with severe comorbidities such as hematological malignancies. It is commonly found in the environment and hospital settings. The most common clinical presentations are pneumonia and bloodstream infections (1, 2).

S. maltophilia is known to have intrinsic resistance mechanisms to many antibiotic classes, including carbapenems, aminoglycosides, most third-generation cephalosporins, and other β-lactams, making it difficult to determine the appropriate antibiotic treatment (1, 2). For example, although  trimethoprim-sulfamethoxazole (TMP-SMX) is the first-line treatment, resistance to this drug has been reported at a rate of 2.1-47.1% in different reports (2-8).

S. maltophilia-associated mortality rates vary widely from 16 to 69% in the literature, depending on the coexisting conditions (1, 4-6, 8-13). The majority of studies have been conducted on patients with hematological malignancies or pediatric patients. Therefore, we evaluated bloodstream infections caused by S. maltophilia in immunocompetent patients with respect to clinical features and risk factors for mortality.

The institutional review board of Koşuyolu Research and Training Hospital approved the study on January 12, 2022, with the decision number of 2022/530.

Electronic medical records and infectious diseases charts were searched for patients’ demographic data, comorbidities, history of ICU admission, hospital setting at the time of detection of bacteremia, antibiotic therapies prior to and after the detection of bacteremia, presence of central venous or urinary tract catheters and mechanical ventilation support and development of septic shock. Acute Physiology and Chronic Health Evaluation (APACHE) II scores were calculated in ICU patients during the detection of  S. maltophilia bacteremia (SMB).

Nosocomial SMB was defined as the detection of S. maltophilia in blood samples obtained at least 48 hours after admission due to clinical symptoms. Contamination with S. maltophilia was defined as patients who had no symptoms of systemic infection and had no growth in the control blood cultures performed without initiation of antibacterial therapy active against S. maltophilia. The source of bacteremia was determined according to the Centers for Disease Control and Prevention (CDC) definitions (14). Simultaneous detection of bacteremia because of other pathogens before or after 24 hours of the identification of S. maltophilia was defined as polymicrobial bacteremia. Septic shock was defined by the presence of sepsis complicated by persistent hypotension requiring vasopressor agents to maintain a mean arterial pressure of 65 mm Hg (15).

The statistical analysis was performed using the Statistical Package for Social Sciences (SPSS) 25.0 (IBM Corp., Armonk, NY, USA). Demographic, clinical, and laboratory data of the non-survival and the survival groups were compared. Continuous variables were expressed as means (standard deviation, SD), and categorical variables were expressed as numbers (percentage). The Kolmogorov-Smirnov test was used to analyze the normality of the distribution of parameters. Data that did not show a normal distribution were expressed as a median with the interquartile range (IQR). The nonparametric Mann-Whitney U-test was used to compare numerical data, and the chi-squared test or Fisher’s exact test was used to compare categorical data.

Demographic and Clinical Characteristics of the Patients

We identified a total of 97 patients with SMB. Of these, 17 patients were excluded because of  community-acquired infections (n=9), contamination with S. maltophilia (n=3), and insufficient data (n=5), with 80 (57.5% males) patients remaining for analysis. The mean age was 54.9±16.5 (ranges: 16-87) years, and 23 patients were older than 65 years of age. The most common comorbid diseases were hypertension (55%), followed by diabetes mellitus (42.5%), and congestive heart failure (27.5%). Seventy-one patients had a history of ICU admission either before or after the detection of bacteremia. The median length of hospitalization was 60 (IQR 28-101) days, and the median duration of hospitalization before identification of S. maltophilia was 28.5 (IQR 16.3-51.3) days (Table 1).

At the time of diagnosis of SMB, 54 patients had a fever (≥ 38 °C), nine had hypothermia, 22 had respiratory symptoms, and 22 were in septic shock (Table 1). The majority of patients (n=58) had been receiving antimicrobial therapy before the identification of S. maltophilia (Table 1).

The source of infection was the respiratory tract in 28 (35%) patients. A CVC was used in 60 (75%) patients, which required replacement in 23 patients within five days after detecting SMB (Table 1).

On antimicrobial susceptibility testing, 71 strains were susceptible, and nine were resistant to TMP-SMX (11.3%) (Table 1). 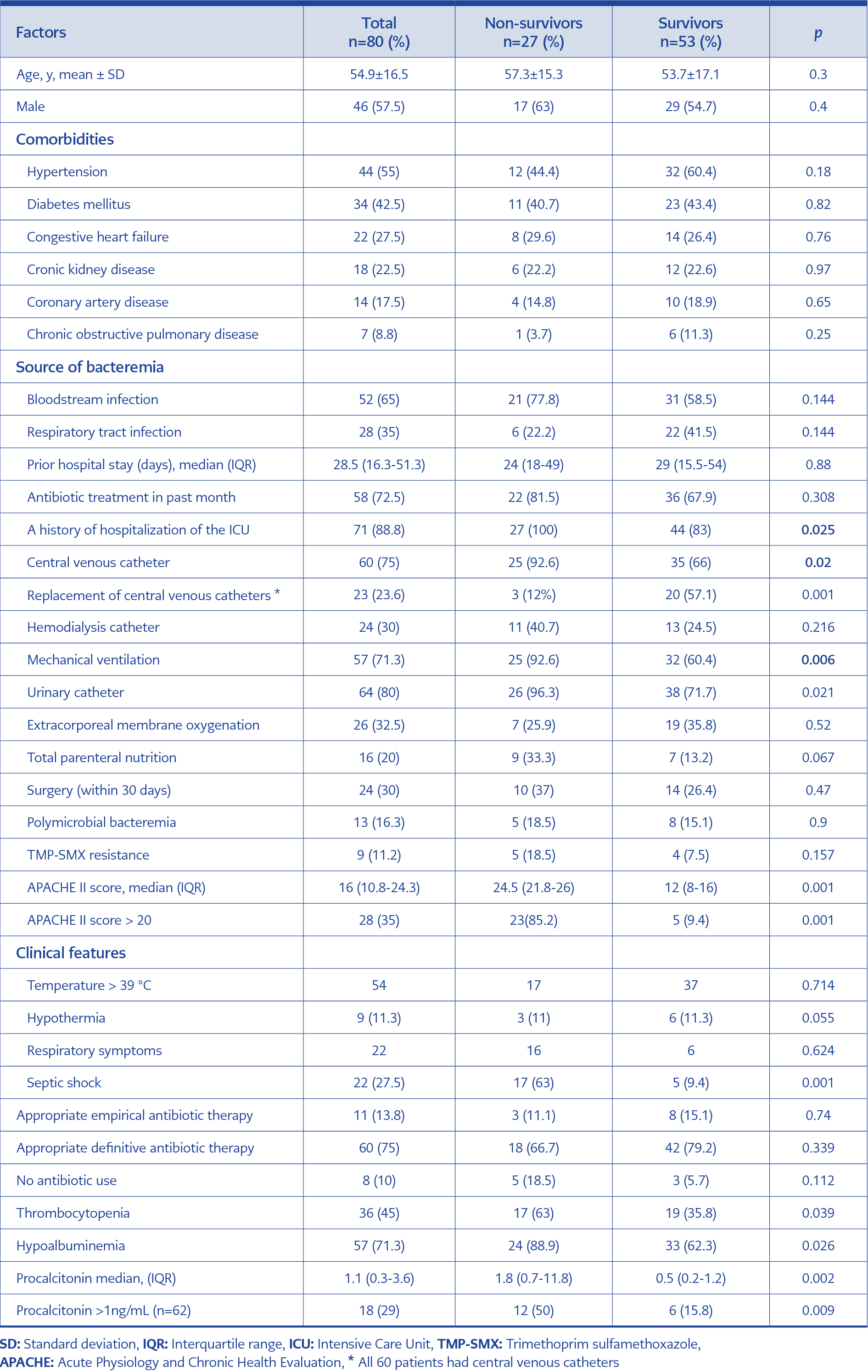 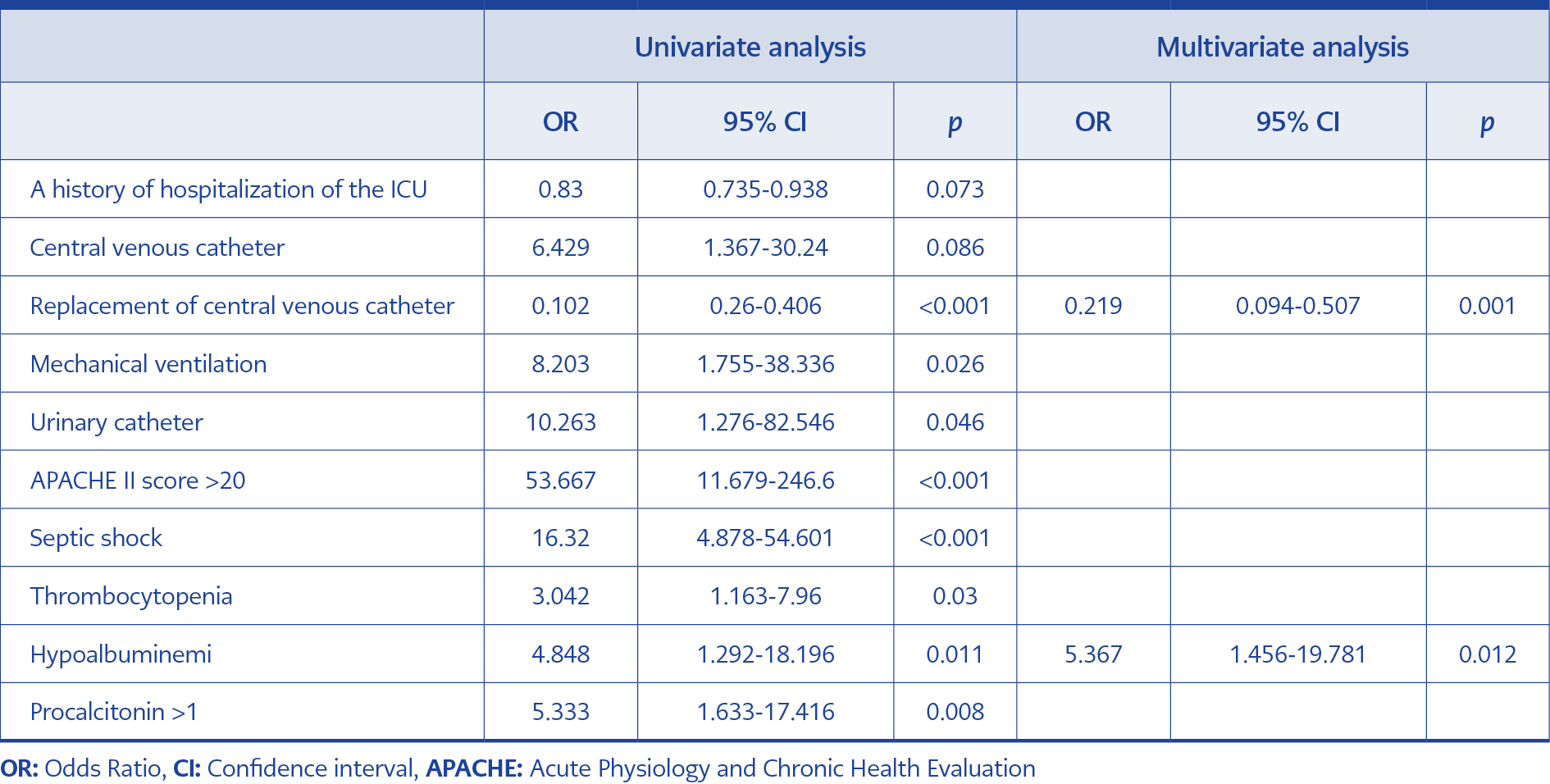 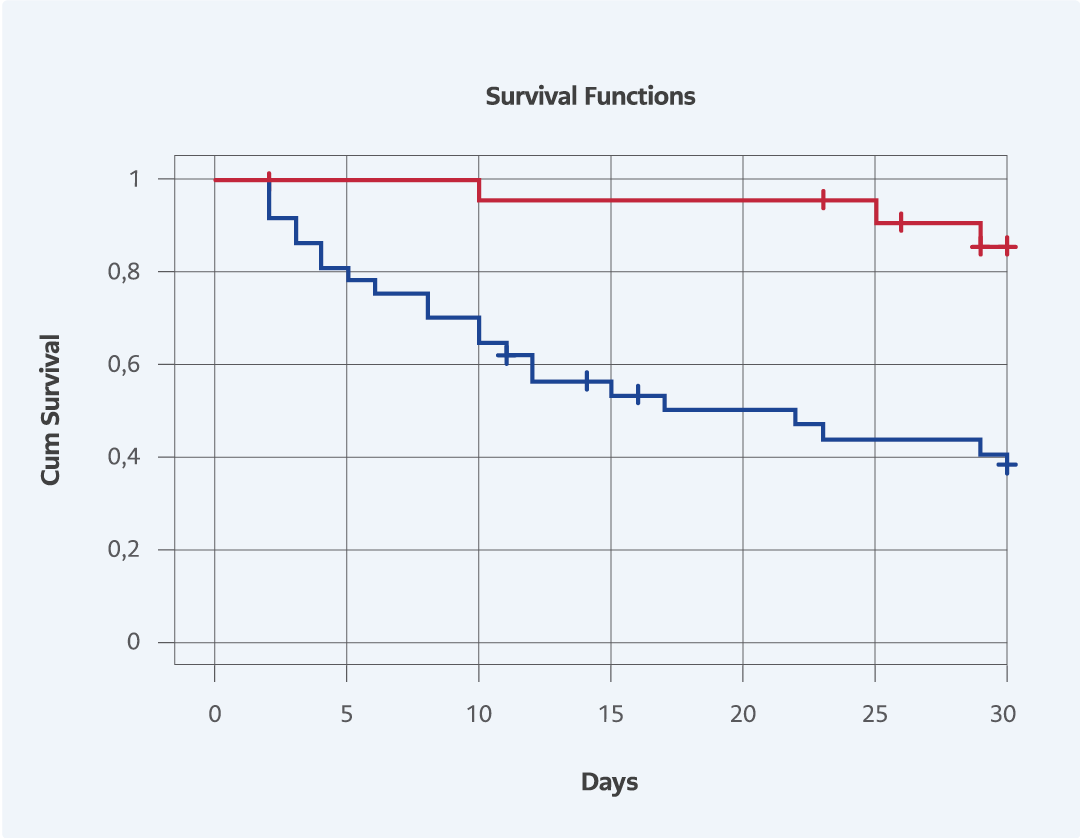 Figure 1. The effect of survival rate among the patients with and without replacement of Central Venous Catheter (p=0.001).

Our results showed that S. maltophilia bacteremia was independently associated with mortality in patients with hypoalbuminemia, and replacement of CVCs had a protective role in reducing mortality. The majority of studies on the risk factors of S. maltophilia-associated mortality were performed in patients with hematological malignancies or the pediatric age group. The present study differs in this respect in that all the participants were hospitalized for cardiac causes, and none had hematological malignancies or were in the pediatric age group.

S. maltophilia-associated mortality rates vary widely from 16 to 69% in the literature, depending on the coexisting conditions (1, 4-6, 8, 10-13). In the present study, 30-day mortality among patients with cardiac conditions was 33.8%.

Understandably, the removal or replacement of CVCs would have a beneficial role in mortality because CVCs represent a suitable environment for biofilm formation (13). In line with previous studies addressing the preventive role of CVC removal (6, 8, 12), the rate of CVC replacement was significantly higher among survivors than among non-survivors (Table 1).

Hypoalbuminemia represents a complicating factor in the setting of SMB infections and adversely affects survival (13). In the current study, the incidence of hypoalbuminemia was significantly higher among non-survivors than among survivors (88.9% vs. 62.3%). It is known that hypoalbuminemia is often observed in patients with sepsis; it may increase the risk of infections and mortality in critically ill patients.  Moreover, albumin is a negative acute phase reactant.  However, the causal relation is not known despite such an association (16).

Appropriately empirical antibiotic use remains challenging in the presence of suspected bacterial infections, particularly for S. maltophilia. Inappropriate empirical antimicrobial treatment was reported to be an independent risk factor for mortality in S. maltophilia infections (5, 10). Conversely, the appropriateness of either empirical (8, 12) or definitive (12) antimicrobial therapy has been reported to be unrelated to mortality. In the current study, the rate of empirical antibiotic therapy with TMP-SMX might be beyond expectations, possibly owing to an increased awareness of S. maltophilia infections at our institution, particularly heightened by the emergence of an S. maltophilia outbreak recently reported by the authors (17). Our findings showed that the survivor and non-survivor groups did not differ significantly with respect to the use of either appropriate empirical or definitive antibiotic therapy (Table 1).

The retrospective study design and relatively small patient size are the main limitations of the present study.

Ethical Approval: The study was approved by the Koşuyolu Research and Training Hospital Review Board on January 12, 2022, with the decision number of 2022/530.