Public Knowledge and Attitudes Regarding Antibiotic Use in Ankara, Turkey

Objective: Turkey is one of the countries with the highest antibiotic consumption per capita and suffers widespread antimicrobial resistance. However, few studies are measuring the knowledge, attitude and behaviour regarding antibiotic use in Turkey. We aimed to describe the awareness, knowledge, beliefs, attitude and behaviour of the society regarding antibiotic use and antimicrobial resistance.

Materials and Methods: The study was carried out at a large shopping mall with 60 000-75 000 visitors daily in the capital city of Turkey, Ankara. We applied a questionnaire to the visitors who accepted to participate for two days. The data were collected on demographics, knowledge, attitude and beliefs concerning antibiotic use and awareness of judicious antibiotic use (JAU) and related factors.

Conclusion: Awareness and knowledge about JAU in Ankara were low. There are misbeliefs and inappropriate attitudes in terms of antibiotic use and antimicrobial resistance. Necessary precautions should be taken immediately to improve this issue.

Turkey is one of the countries with the highest antibiotic consumption per capita and suffers widespread antimicrobial resistance.

24.3% of participants demand antibiotics when they visit a physician. Of these, 83.5% have reported that the physicians complied with their demands.

67.5% of participants were aware of the term of antibiotic resistance while 117 (17.1.%) of these could not link antibiotic use and the development of resistance.

The main source from where the participants heard the term of antibiotic resistance was the internet (n=348, 51.03%).

High level of education and being informed about the possible harms of antibiotic use were found to be related to JAU.

The discovery of antibiotics has been a milestone for the treatment of infectious diseases. However, soon after antimicrobials came into use, it has been recognized that microorganisms become resistant. Antimicrobial resistance decreases the number of treatment options available in infectious diseases. Currently, antimicrobial resistance has become an issue that concerns the human health (1). Data from various countries reporting high levels of resistance to fundamental antibiotic groups is growing (2). It has been estimated that because of resistant bacteria, about 700 000 people die annually in EU countries alone, and the annual cost related to antimicrobial resistance is 1.5 billion Euros. In 2050, it is expected that resistant microorganisms will become the most common cause of death by killing 10 million people annually (3).

Surveillance studies showed that Turkey is one of the countries with the highest antibiotic consumption per capita and suffers widespread antimicrobial resistance (7,8). Few studies are measuring the knowledge, attitude, and behaviour of the public regarding antibiotic use in Turkey (9). This study is conducted in Ankara to determine public awareness related to judicious antibiotic use (JAU) and antimicrobial resistance.

The study was carried out on March 18 and 19, 2017 at a large shopping mall with 60 000-75 000 visitors daily, in the capital city of Turkey, Ankara. Through face-to-face interviews, a questionnaire was applied to 1044 consenting adult (age> 18) participants. The survey consisted of 19 questions: Eight for demographic variables, ten for assessing the knowledge, attitude and behaviour on antibiotic usage, and 1 for awareness of antimicrobial resistance (supplemental material). The participants who correctly answered all 10 questions that measured knowledge, attitude and behaviour were scored high and considered as judicious antibiotic users. The factors affecting JAU were determined on this base.

The data obtained from the questionnaires were recorded on a standard sheet and statistically analyzed by SPSS 11.5. The chi-square test was used for comparisons of categorical variables, and continuous variables were analyzed with the t-test. A logistic regression model was generated with including variables which were found to be significant in univariate analysis. Statistical significance was set as p<0.05.

Permission was obtained from the Ankara University School of Medicine Ethical Committee for the study. All participants were informed, and we obtained their written consents.

Table 1.The characteristics of participants (N=1044)

The demographics and independent variables were summarized in table 1.

Among the participants, 127 (12.7%) people were found to have a JAU score of 10. A monthly income of > 5000 TL, being a health care worker, the higher level of education and cultural status were related to a high JAU score. Other characteristics of participants affecting JAU were given in table 2. 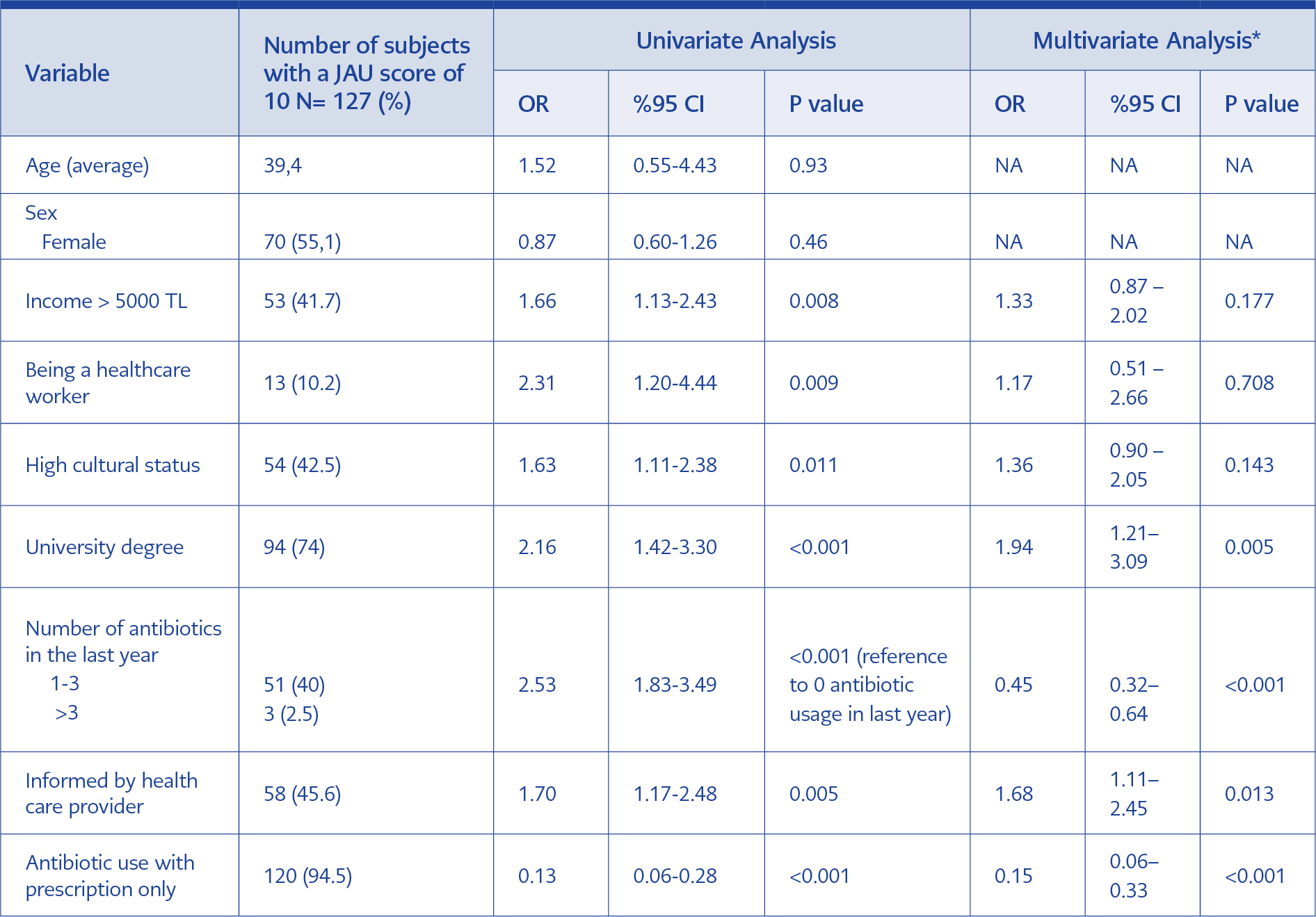 Table 2. Analysis of the characteristics affecting Judicious Antibiotic Use

In the multivariate analysis; being informed by physicians about the possible harms of inappropriate antibiotic usage, having a university degree, using antibiotics with prescription only, and no antibiotic use within the last year were found to be significantly related to JAU (Table 2).

Judicious use of antibiotics is defined as using antibiotics only when needed for infections for an appropriate duration, at an appropriate dose, and at the lowest cost possible considering individual characteristics (10). In Turkey, with the most antibiotic usage per capita amongst OECD countries, it is determined that at least 35 out of every 100 prescriptions included an antibiotic (8). Indeed, 63.7% of our participants have reported using antibiotics within the last year. About 24% of the participants demand antibiotics when they visit a physician. Of these, 83.5% have reported that the physicians complied with their demands. This underlines the pressure on physicians as a contributing factor for inappropriate antibiotic usage. In a similar study conducted in Ankara in 2014, Gül et al. reported that 64% of their participants demanded a prescription for antibiotics when they visited a physician (11). Recently, the Turkish Ministry of Health has launched a big campaign with the slogan ‘’Don’t insist on antibiotics, insist on your health.’’ This slight decrease between 2017 and 2014 on demanding an antibiotic indicates an improvement and reveals the impact of this intervention. Educating people may improve JAU by alleviating this pressure.

JAU was found to be 12.2% while a similar study in Italy reported 21.2% (12). High income, education and cultural level were found to be related to JAU. These data are in parallel with studies from Malesia and Hong Kong (13,14), which point out the importance of education.

While 27.6% of our participants have a history of using antibiotics without prescription, İlhan et al. reported a ratio of 19.1% in their study conducted in 2009 in Ankara (15). The rate of self-medication with antibiotics was reported as high as 64.3% in another study conducted in 2014 in Ankara (11). This ratio was reported as 32.7% in Italy (12) and 7.6% in Malaysia (13). In 2016, the Turkish Ministry of Health banned the sale of antibiotics without a prescription. This precaution is expected to decrease antibiotic usage, and as such, the spread of resistance.
While our study did not find a correlation between gender and JAU (p=0.469), a study from Sweden reported that males used antibiotics more rationally compared to females (16), whereas the opposite was found in a study in Norway (17).

In our study, the primary source from where the participants heard the term antibiotic resistance was the internet (n=348, 51.03%). In the study from Italy, the physicians (80.1%) were the most important source (12). Our study showed that the patients who were informed about the possible harms of antibiotic use (34.9%) had a high JAU. Thus, thorough information provided by the physicians may contribute to improving JAU.

Our study showed that 64.3% of the people keep unused antibiotics, and about 10% offer leftover antibiotics to others. In the study of Derin et al., it was determined that keeping antibiotics for future use was associated with inappropriate antibiotic use (9). In the same study, the rates of prematurely stopping antibiotics were found higher in those patients who used antibiotics for upper respiratory complaints. In our study, it was seen that 203 (19.4%) of participants stopped taking antibiotics when their complaints subsided, and not completed the prescribed regimen. In order to prevent this inappropriate practice which may lead to antibiotic resistance, the number of pills can be limited by the duration of treatment in addition to informing the patients about the adverse effects of using leftover drugs.

Conclusion: The level of JAU is low in Ankara. This result was the consequence of not only the inadequate information provided by the health care professionals but also the low level of education and cultural status of the public. Informing people about the interaction between inappropriate antibiotic use and antibiotic resistance is pivotal in raising awareness as well as the level of JAU. Due to the wide distribution and ease of access, this information may be provided by health care professionals on web-based platforms.

Ethics Committee Approval: The Ethical Committee of Ankara University, Turkey, approved the study with the decision number of 23.12.2016/7484.