Identification and assemblage types of Giardia duodenalis from patients in Thrace, Turkey

Objective: Giardiasis is a common disease, and clinical forms can vary based on the assemblage types of the parasite. Detailed information on the subgenotypes may indicate the transmission routes and enlighten the gaps in the epidemiology of the disease. This study aims to reveal the occurrence of giardiasis in Thrace, Turkey, and assemblage types of Giardia duodenalis.

Materials and Methods: In total, 573 stool samples taken from the individuals applied to Tekirdağ Central State Hospital in 2009, were examined by wet-mount and zinc sulfate floatation methods. Giardia-positive 26 samples and 64 samples taken from the individuals with gastrointestinal complaints were analyzed by nested PCR-RFLP to differentiate the assemblage types. Sequence analysis was employed for confirmation of assemblage types and subgenotypes.

Results: Giardia spp. cysts were detected in 3.66% and 4.54% of the samples with wet-mount and zinc sulphate floatation techniques respectively. A total of 27 samples were found positive by nested PCR-RFLP out of 90 samples. Fifteen samples were determined as assemblage A, 2 and 10 samples as B and B/E mix respectively. Sequence analysis showed that the latter assemblage (B/E mix) as A3-B3 mix.

Conclusion: Fast identification techniques, namely zinc sulphate flotation can be used for screening stool samples in order to determine Giardia cysts with considerably high sensitivity and specificity. Based on this method, the occurrence rate of giardiasis was found as 4.54% in the studied group. DNA sequencing is necessary to distinguish assemblages and confirm the results of PCR-RFLP.

This study provides up-to-date information on the occurrence and prevalence of giardiasis in a previously unstudied region.

Obtained results emphasize that subgenotyping of G. duodenalis can reveal the transmission ways of the infection in the studied region and suggest implications for protective precautions.

Results show that the fast diagnostic techniques such as zinc sulphate flotation can be a choice for detection of the parasite. On the other hand, the most reliable technique for differentiation of the assemblage types and subgenotypes was determined based on DNA sequencing.

The genus Giardia includes six species based on the morphological features of trophozoite and cyst forms. Of these, Giardia varani is found from water monitor Varanus salvator, while Giardia agilis, Giardia ardeae and Giardia psittaci, Giardia microti and Giardia muris, and Giardia duodenalis from amphibians, birds, rodents, and mammals, respectively (1). Giardia duodenalis (syn. Giardia intestinalis, Giardia lamblia) of zoonotic importance infects humans and more than 40 other mammals (2). Molecular studies and antigenic analyses revealed that G. duodenalis comprises at least seven assemblages which are geno/phenotypically distinct, but morphologically similar (3-5). Assemblages A and B which are considered potentially zoonotic are found in both humans and animals (6, 7), such as non-human primates, canids, felines, rabbits, beavers, muskrats, mustelids, rodents, marsupials, wild ruminants and livestock animals (8). However, the other assemblages are considered principally host specific, and of those, assemblage C and D have been described in dogs, cats, coyotes and wolves, E was isolated in hoofed animals such as cattle, sheep, goats, pigs, water buffaloes and mouflons, F is specific for cats, G is found exclusively in mice and rats, and in cats as well, and H was detected in pinnipeds faeces (8, 9).

Cysts of the parasite, which inhabits small intestine and has a monoxenous life cycle, become infectious shortly after they are excreted with the faeces, surviving for months in aqueous environments, and a few oocysts can cause infection when contaminated water and food are taken orally. These aspects matter in epidemiologic characteristics of this zoonotic agent (1). Giardiasis is a common disease throughout the world, and 280 million people develop symptomatic Giardia infection annually, thus being considered a global endemic (1, 5). On the other hand, the prevalence of the parasite considerably differs in distinct populations and geographic regions. It was reported that this parasite annually infects around 200 million people in developing countries, especially in Asia, Africa and Latin America (7). However, incidence rates observed in developed countries ranges from 1-7% (5). For instance, 20-30% of humans are the transmitters in developing countries while annual giardiasis cases are around 1200-1500 in Sweden which is over a certain socioeconomic threshold (10).

This study aims to reveal the occurrence of giardiasis in Thrace, European part of Turkey, and its incidence, along with the establishment of assemblages of the causative agent G. duodenalis by providing descriptive characteristics of subgenotypes.

Single stool samples were collected from 573 of the patients who applied to Tekirdağ Central State Hospital during a one-year-period, 2009, based on gastrointestinal complaints, clinical examinations and macroscopic features of stool. Patients genders, ages, addresses and other information including clinical findings and other diseases, if any, were recorded. Samples were transferred into 15 ml clean plastic tubes, mixed with potassium dichromate solution to a final concentration of 2.5% and were stored at +4°C until examination within a month using native and floatation techniques.

An ethics committee approval was not provided in this study because the regulation on clinical research entered into force on 19 August 2011 (Official Gazette number 28030) in Turkey, and ethics committees within the scope of this regulation began to be formed thereafter. However, informed consents of the patients were taken after explaining to them the details of our study.

Microscopic examination of a wet-mount with saline of fresh stools was performed at x10 and x40 magnification. Zinc sulfate (ZnSO4; 33%) floatation concentration technique (11) was also used to examine the stools. After the completion of the microscopic examination, the samples were stored at -20°C until DNA extraction.

DNA was extracted from a total of 90 stool samples including 26 samples which were positive by microscopic examination, and 64 samples which were suspected as giardiasis according to both stool morphology and clinical suspicion (12-14). QIAamp DNA Stool Mini Kit (Qiagen, Germany) was employed based on the manufacturer’s instructions. Extracted DNAs were stored at -20°C until use.

10 µL of the amplification products were digested with 10U of BsuRI (HaeIII) restriction enzyme (MBI Fermantas, Lithuania) overnight at 37ºC and separated on a 12% polyacrylamide gel, stained with ethidium bromide, visualized with UV transillumination, and the results were evaluated according to Lalle et al. (16).

511 bp samples were sequenced bidirectionally using the same primer sets given in nested PCR step. For this purpose, the PCR products were purified with PEG 4000 as described by Rosenthal et al. (17), subsequently sequenced by using Big Dye-terminator chemistry (Beckmann Coulter, USA) according to the manufacturer’s instructions. For this purpose, the sequencing reaction was performed in a Techne TC-Plusthermocycler at 96ºC for 20 sec, and annealing at 50ºC for 20 sec and extension at 60ºC for 4 min each, for 30 cycles. Analyses of sequencing reactions were performed on an automatic sequencer Beckman Coulter Genome Lab Genetic Analyzer (Beckmann Coulter, USA).DNA sequences and chromatograms obtained were examined by using GenomeLab GeXP Genetic Analysis System Version 10.2 DNA sequencing program (Beckman Coulter, USA). The precise assemblages of the Giardia-positive samples were determined with comparing the sequencing results with the reference sequence published by Cacció et al. (15) by using the web-based bioinformatic programme Clustal Omega (http://www.ebi.ac.uk/Tools/msa/clustalw2/).

Table 1. Characteristics of the patients and the samples regarding positive results.

Macroscopic features of the samples

The gender of the patients was 301 males (52.53%) and 272 females (47.47%), with an average age of 19.03 (ranging from 3 days to 97 years old). Clinically, 427 of the patients demonstrated symptoms of a gastrointestinal disorder. Specifications of the stool samples such as colour, content texture and assemblage types of the Giardia-positive patients with various clinical presentations were given in the Table.

Native stool examination at x40 magnification detected Giardia spp. cysts in 21 samples (3.66%). With zinc sulphate floatation technique, five more samples were found to be positive for Giardia spp. cysts, reaching a total of 26 positive samples (4.54%). Sensitivity and specificity of zinc sulphate floatation technique were 96.30% (26/27) and 100% (63/63), respectively, in consideration of nested PCR. The number of cysts determined at x40 magnification was 1-2, 3-5, and over 5 per microscopic field for 8, 2 and 16 samples, respectively. 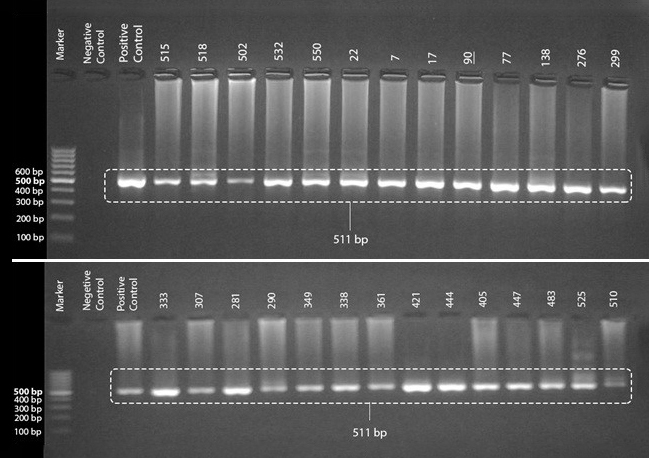 Figure 1. PCR products (511 bp) of nested-PCR positive samples visualized on 2% agarose gel. The numbers above the wells were the assigned protocol numbers for the samples.

Figure 2. HaeIII restriction products of 27 samples visualized by PAGE (12%).The assigned protocol numbers and assemblage types of the samples were given above the wells.

Most of the studies on giardiasis in Turkey are based on microscopic examination of stool samples, reporting a positivity ranging between 0.8-54.8% (18). The present study detected a positivity of 3.66% by native examination and of 4.54% by zinc sulfate floatation concentration technique. These rates are in concordance with the prevalence rates of giardiasis in both Turkey and worldwide. It is known that the prevalence of giardiasis is associated with socioeconomic status, and being lower (0.4-7.5%) in developed countries and higher (8-30%) in developing countries (1). 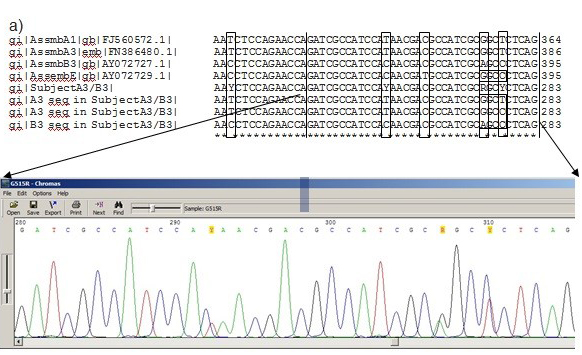 The role of animals in the epidemiology of human giardiasis is still under debate. Host distribution of assemblage B is restricted to humans, and therefore humans are its primary source while assemblage A is found in a wide range of mammals, and its prevalence is higher in them than in humans. As a result of these variations, assemblage A is incriminated as an important zoonotic agent. In our study, among the 27 positive samples, 15 were found as assemblage A, and only one patient among this group was living in the rural area. Although the majority of the cases were from urban areas, the occurrence of assemblage A as dominant causative agent indicates a possible zoonotic transmission. Livestock which was reported as the primary source of assemblage A (32) are not raised in urban areas of Tekirdag; on the other hand, other domestic animals may play a significant role in transmission. Dogs and calves were reported as main animals in terms of zoonotic transmission for subgenotypes A1, A2, A3, A4 and B3 which are found in humans (33). In our study, subgenotypes A3 and B3 were detected in all positive samples suggesting a possible zoonotic transmission. In addition, contaminated city water and/or fruit and vegetables brought to the city markets from the villages should be considered as the way of transmission. Assemblages C, D, E, F and G show strong host specificity, having narrow host ranges, and there is no evidence that they are of importance to human health (7). Assemblage E is especially found in livestock including cattle sheep, goats and pigs, as well as known to occur in wild animals, cats, dogs and some other animals (32).

Some studies revealed that assemblage B is responsible for persistent infections in humans, whereas assemblage A is found in diarrhoea or subclinical cases (13, 14). However, studies in which different results were obtained are also available (19, 22). In our study, gastrointestinal symptoms were common in 33.33% of the assemblage A-positive patients whose stool consistency was hard (40%) and normal (53.33%).

As a conclusion, the presence of G. duodenalis should be considered in patients with gastrointestinal complaints, regardless of the stool consistency. Among the fast detection techniques, zinc sulphate flotation can provide reliable results for the evaluation of stool samples. Although RFLP-PCR may provide information on the assemblage types, accurate results and subtyping can be achieved by DNA sequencing at the most credible level. Assemblage types and subgenotypes may provide information for the transmission possibilities of the infectious agent.

Ethics Committee Approval: The ethics committee approval was not provided in this study because the regulation on clinical research entered into force on 19 August 2011 (Official Gazette number 28030) in Turkey, and ethics committees within the scope of this regulation began to be formed thereafter.

Informed Consent: Written informed consent was obtained after explaining to them the details of our study from the patients who participated in this study.