Objective: Percutaneous transhepatic cholangiography (PTC) is an invasive procedure used in patients with obstructive jaundice in the progress of some malignancies, and its most common complication is infection. We aimed to evaluate the patients who underwent PTC regarding their cultures, prophylaxis, and antibiotics used for treatment.

Materials and Methods: In this cross-sectional study, patients who underwent PTC and were followed up in a medical oncology outpatient clinic between 2010-2017 were evaluated retrospectively. Patients’ data were obtained from the hospital record system (FONET), epicrisis forms, and patient progress files.

Results: A total of 93 patients were included in the study. Prophylaxis was given in 50% of the cases. Complications developed in 68% of the cases after the intervention, and the infectious disease clinic consulted all. Blood cultures were obtained from 89% of the febrile patients; however, bile cultures were obtained only from 29%. The rate of resistant Gram-negative enteric bacteria in growing microorganisms was 52% (n=13). It was determined that 65% of the initiated empirical treatments were appropriate for the growth of microorganisms.

Percutaneous transhepatic cholangiography (PTC) is an invasive procedure used in patients with obstructive jaundice in the progress of some malignancies to reduce bilirubin levels, improve liver functions, prolong survival and enable other treatments. The procedure is critical because of its potential complications. The most common complications are bloodstream and biliary tract infections secondary to bacteremia. Different infection rates have been reported in previous studies, such as 67 of 343 patients (19.5%), 46 (30%) of 152 patients, and 83 (43%) of 193 patients (1, 2, 3).

Multiple mechanisms have been blamed for the development of infection, such as reduction in intestinal T-cells and natural killer cells in patients with obstructive jaundice, reduction in neutrophil count and function in mice with obstructive jaundice, and cellular membrane with various oxidative enzymes secreted from neutrophils (4, 5). In addition to cellular factors (such as the destruction of the bile), a marked decrease in the phagocytic functions of Kupffer cells despite the increase in their number was observed (6, 7). Relevantly, although the bile is sterile, in case of stasis, it provides an important basis for bacteria to live, feed and multiply, and accordingly, cases may be prone to infection (8). Furthermore, high serum bilirubin levels cause damage to the intestinal mucosa and predispose it to bacterial translocation (9). Exogenous planting directly into the biliary tract from a percutaneously placed catheter causes reaching the biliary tract by hematogenous route (10). Because the pressure of the bag that takes the bile out is lower than the intestinal lumen pressure, bacteria can reach the biliary tract more easily, and this paves the way for the development of infection in the bilioenteric anastomosis and previous instrumentation (3, 11).

Kaya et al., reported that Escherichia coli, Pseudomonas, Klebsiella spp., enterococci, and enterobacteria were the most common microorganisms in cholangitis and bacteremia developing after PTC (10). In another study, E. coli (36%), Klebsiella pneumoniae (13.5%), and Enterococcus faecalis (12%) were the most common (1). In the Tokyo Guidelines 2018, E. coli was found to be 23%, Klebsiella 16%, and Enterococcus spp. 20% in healthcare-associated cholangitis and bacteremia (12). In another study that followed patients with malignant obstructive jaundice, the Gram-negative enteric bacteria rate was 40% (3). Other studies stated that the most common causative organisms in cases of biliary sepsis after biliary intervention are E. coli, Clostridium, and enterococci (11, 13).

There is little consensus in the literature about optimal coverage for biliary procedures. However, for prophylaxis before PTC, an invasive procedure applied to the biliary tract, one gram of ceftriaxone, second-generation cephalosporins, or one and a half grams of ampicillin-sulbactam have been recommended intravenously in different studies (3, 14, 15). Another view is that prophylactic antibiotics are administered as a single dose only in cases where diagnostic imaging will be performed. In these cases, 3rd generation cephalosporins are often preferred. In the presence of comorbid disease, appropriate antibiotic therapy is administered after consultation with the clinician (3).

In the current study, patients who were followed up with different diagnoses of malignancy and underwent PTC in the medical oncology clinic of our hospital were evaluated in terms of fever, growths in blood and bile cultures, prophylaxis, and antibiotics used in treatment.

In our study, 93 patients who were followed up in the medical oncology clinic of Ankara Numune Education and Research Hospital between 2010 and 2017 and underwent PTC were evaluated retrospectively. Age, gender, primary diagnosis, and other detailed patient data were obtained from the epicrisis forms in the hospital electronic data system (FONET) and the patient follow-up files of the medical oncology clinic. In patients who underwent PTC, given prophylaxis, detected microorganisms in blood and bile cultures, and given treatments were evaluated. The criteria for diagnosing cholangitis were as follows: body temperature >38 °C, leukocyte count >10,000/mm3, right upper quadrant pain, and no infection in other parts of the body.

The Ethics Committee of Ankara Numune Education and Research Hospital approved our study on September 06, 2018, with the numbers E-18-2192. Our study was conducted in 2018, and since it is retrospective, it has been reported that the ethics committee does not require informed consent. 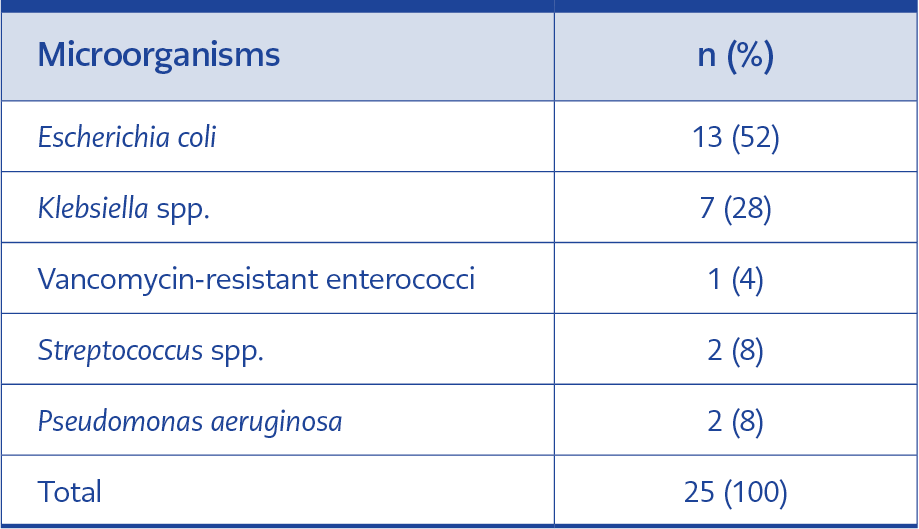 After the intervention, complications such as cholangitis, bleeding, hemobilia, fever, and pancreatitis developed in 68% (n=63) of the cases, and all of them were consulted to the infectious diseases department. Antibiotherapy (53% [n=33] piperacillin-tazobactam, 24% [n=15] carbapenem, 23% [n=15] cephalosporin) was initiated in all consulted cases. The mean duration of antibiotic use was 9.74±4.54 days. Blood cultures were obtained in 89% (n=47) of patients with fever; however, the rate of bile culture was only 29% (n=15).

The growth was detected in 40% (n=19) of the blood cultures and 17% (n=3) of the bile cultures. We detected that 53.8% (7/13) of E. coli isolates and 85.7% (6/7) of Klebsiella spp. isolates were multidrug-resistant (extended-spectrum beta-lactamase-producing [ESBL+]). In addition, vancomycin-resistant enterococci were %4 (n=1), and Pseudomonas was 8% (n=4) (Table 1).  We determined that 65% (n=15) of the empirical treatments initiated were appropriate for the detected microorganisms.

One of the complications of the PTC procedure performed in oncology patients is infection (16). Infection prolongs the hospital stay and decreases the patient’s life quality (17). Oncology patients are frequently hospitalized, and they use antibiotics for various reasons. Microorganisms found in the flora of patients, colonized in the body, and being a source of infection generally have multidrug resistance (18). In our study, which detected 87% of the complications were fever, blood cultures were taken from 89% of the patients with fever. The growth was detected in 40% of the blood cultures, and 52% of the detected microorganisms were resistant.

We gave prophylaxis to 50% of the cases. Before the intervention, cephalosporin was used in 74% of the cases and piperacillin-tazobactam in 26%. Complications such as cholangitis, bleeding, hemobilia, fever, and pancreatitis developed in 68% of all cases after the intervention, and they were consulted with the department of infectious diseases. There are no randomized controlled studies and no consensus on prophylaxis. Therefore, either 1 g ceftriaxone or 1.5 g ampicillin-sulbactam was recommended based on surgical prophylaxis recommendations, and if there was biliary stasis, it was recommended to continue antibiotics until the obstruction ended (19). Our study found no significant differences regarding the growth rates and the resistance of the microorganisms. Therefore, we think giving antibiotics as treatment rather than prophylaxis is more appropriate.

In our study, the bile culture rate was only 29%, and a growth rate of 17% was found in these cultures. Xu et al., reported that in 193 patients with malignant biliary obstruction, biliary infection developed in 83 (43%) patients after percutaneous biliary drainage (3). In the study of Suk et al., the rate of cholecystitis was 9.7% (23). In another study, including 694 patients, growth in bile culture was 42.9% (24). Kaya et al., found the growth rate in bile culture as 50.5% (10). A study conducted in 2017 reported that biliary infection developed at a rate of 19.5% after PTC (1). Although the rate of growth in bile culture in our study was similar to the one conducted in 2017, the lower rate compared to other studies was attributed to our low rate of taking bile cultures.

Our study has some limitations. The most important one is that the patients could not be followed one by one after PTC because of the study’s retrospective nature. In addition, the parameters were obtained from the patient files, and the data reliability was lower compared to a prospective study.

Ethical Approval: The Ethics Committee of Ankara Numune Training and Research Hospital approved the study on September 06, 2018 with the decision number E-18-2192.

Scientific Presentation: The study was presented as a poster presentation at XXI. Turkish Clinical Microbiology and Infectious Diseases Congress on May 26-30, 2021.