Pattern of Antibiotic Prescriptions in Dentistry in Turkey: Population Based Data from the Prescription Information System

Materials and Methods: Data on systemic antibiotics prescribed by dentists to the Turkish Medicines and Medical Devices Agency’s Prescription Information System were retrospectively collected between January 1, 2013, and August 31, 2015.

Population-based data showed us that 80% of all prescriptions written by dentists included antibiotics.

Limited numbers of antibiotics are used to treat dental infections. Penicillin (penicillin V, ampicillin, amoxicillin and amoxicillin/clavulanic acid), first-generation cephalosporins, clindamycin, and metronidazole are principally used in dentistry (7,8). However, it is known that many antibiotics, which are intended to be limited, are inappropriately used in dentistry (9).

We conducted this observational study between January 1, 2013, and August 31, 2015. Population-based data were collected from prescriptions containing systemic antibiotics, which are recorded by the dentists to the Turkish Medicines and Medical Devices Agency’s Prescription Information System (PIS) of the Ministry of Health of Turkey, and retrospectively analysed. The PIS is a database in which all electronic medicine prescriptions are logged. This database allows various analyses and evaluations of prescriptions written by medical doctors and dentists in primary care and hospital settings. In this study, we included only prescriptions written by dentists. Turkey has a population of 77.7 million people in 2014, and the number of dentists per 100,000 people in Turkey is 28 (11).

Antibiotics were categorized according to the World Health Organization (WHO) Anatomical Therapeutic Chemical (ATC) classification. The distributions of antibiotics (number and percentage) were analysed at three different ATC levels (ATC-3, -4 and -5). Patient age and sex and specialties were analysed in detail. Systemic antibiotics prescribed were compared according to the patient’s age (children: 0–17 years, adult: 18–64 years and elderly: ≥65 years). Dentists were categorized into three groups according to their specialties: surgeons, non-surgeons and unspecified (NS, not specified in the database or general dental practitioners). The administration routes of antibiotics were grouped as enteral or parenteral formulations. Our study is limited to population-based antibiotic utilization rates.

We entered the data into a software program (Microsoft Excel and SPSS 11.5), and used frequency tables to demonstrate the qualitative data. Statistical significance was set as p<0.01. 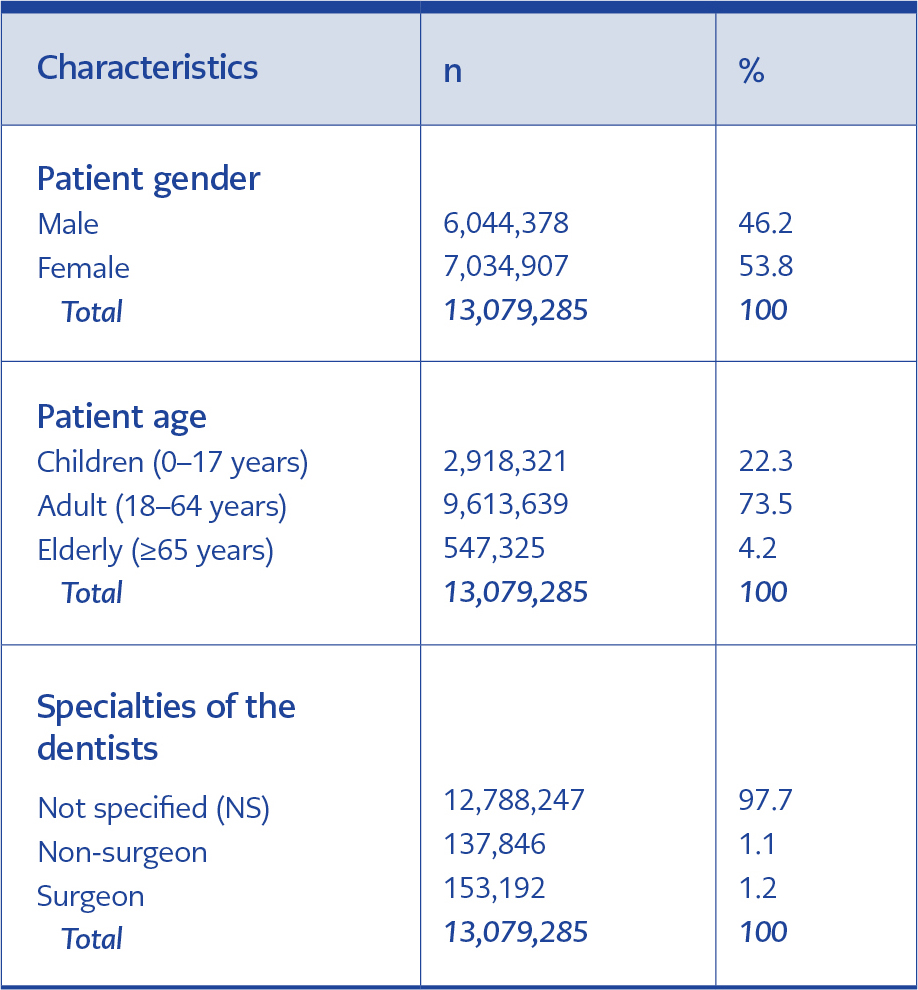 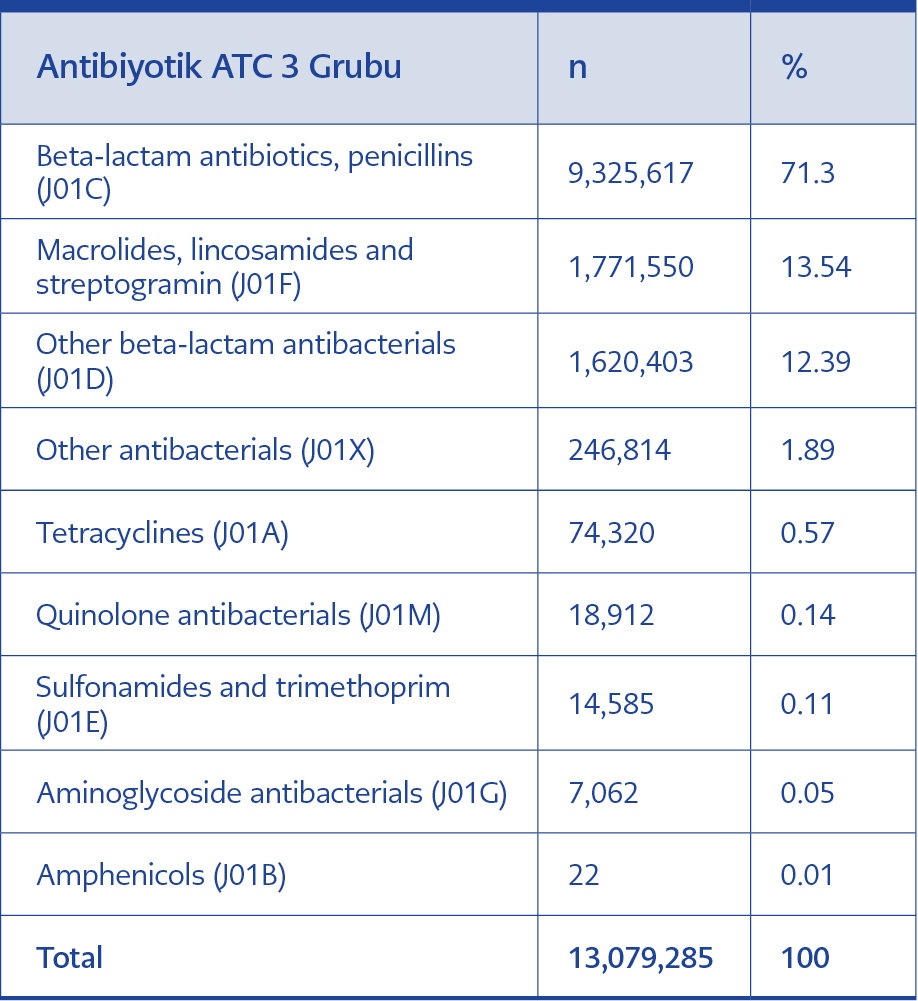 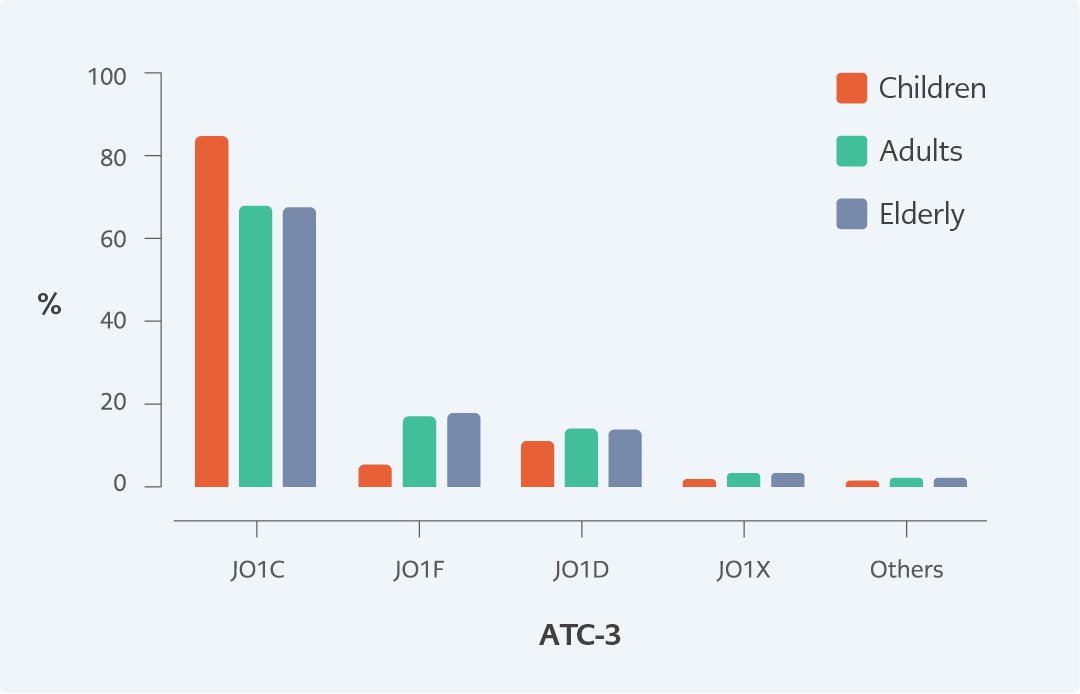 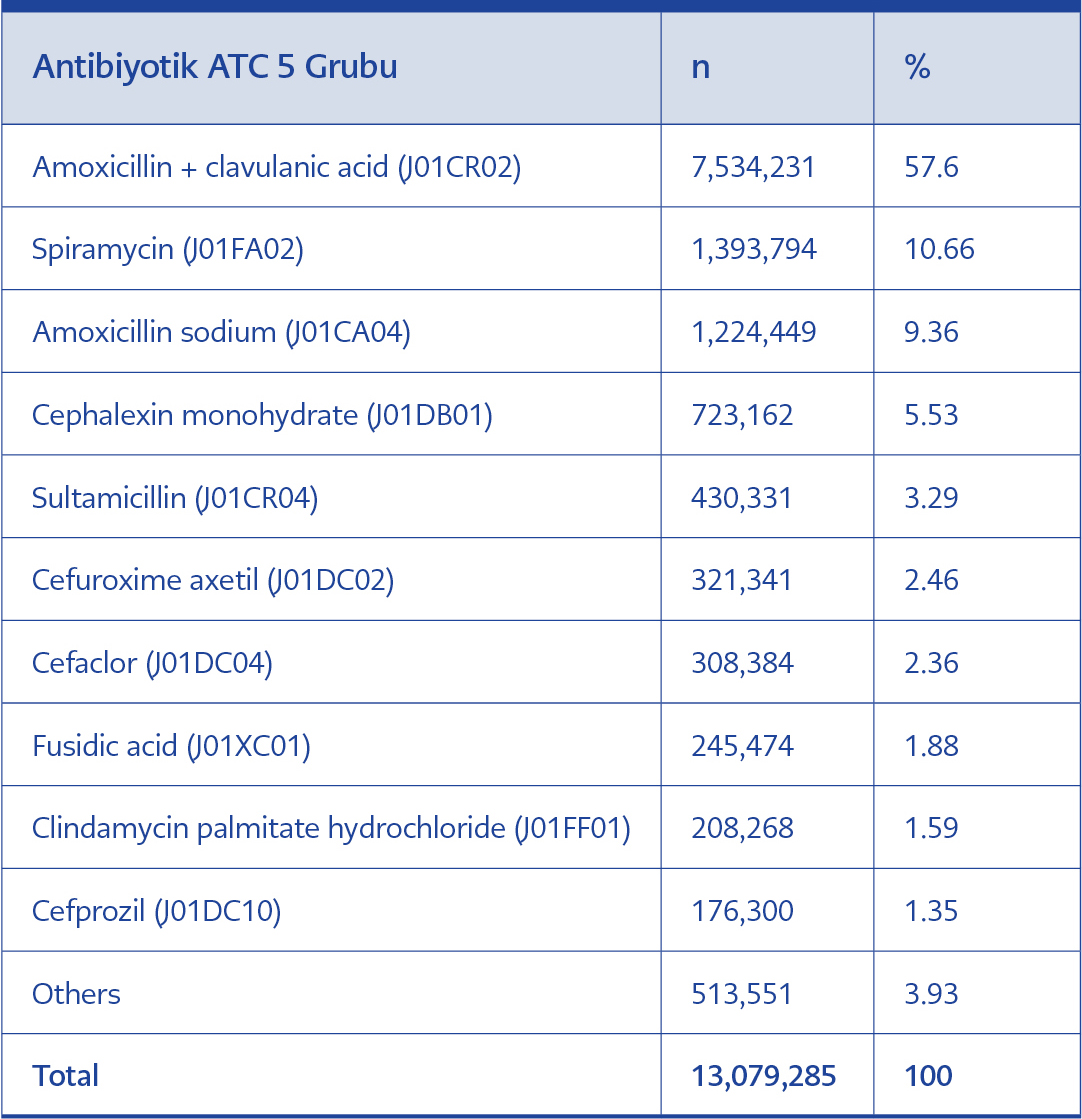 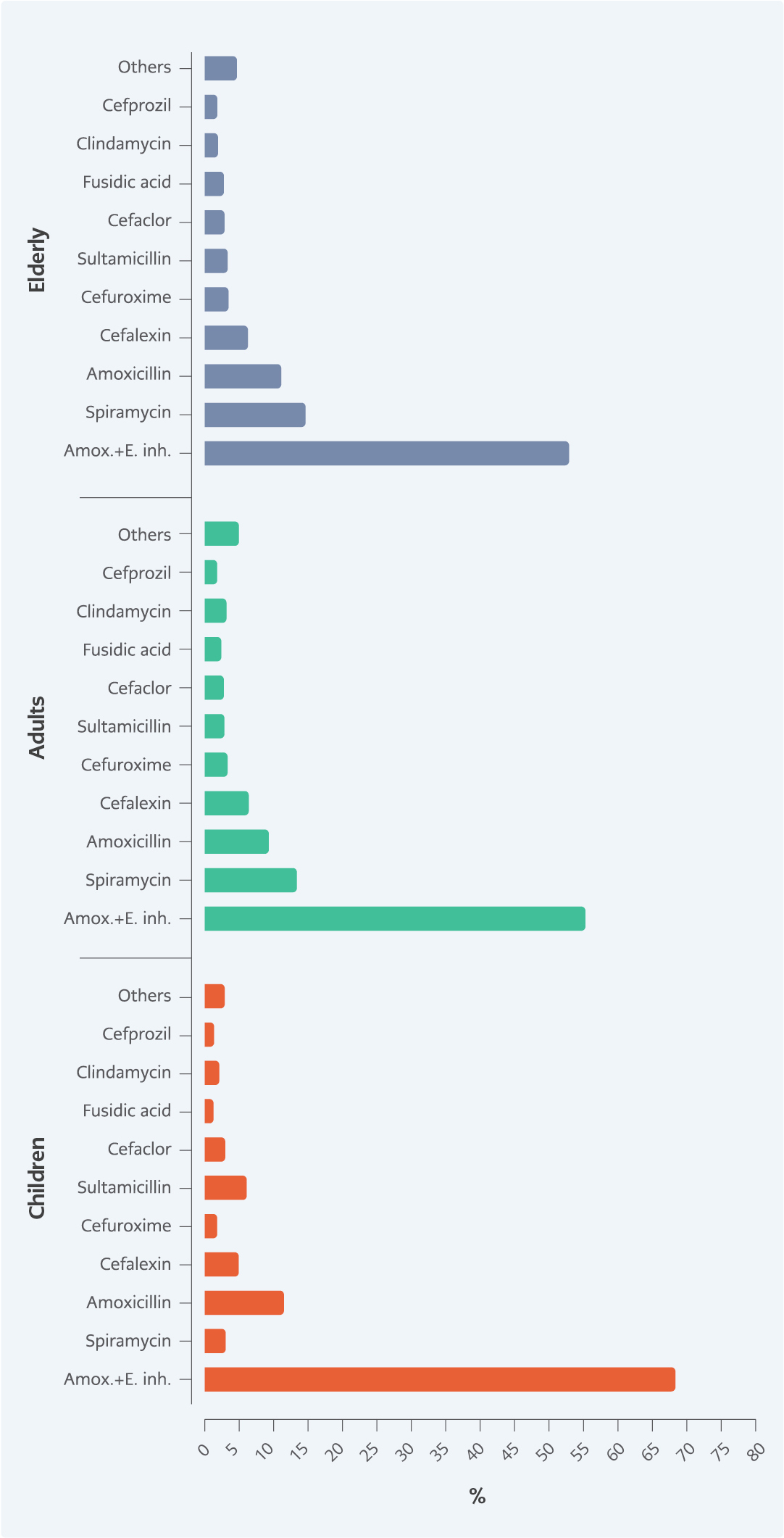 Figure 2. Distribution of antibiotics at the ATC-5 level according to patient age (Amox.+E. Inh: Amoxicillin and enzyme inhibitor). 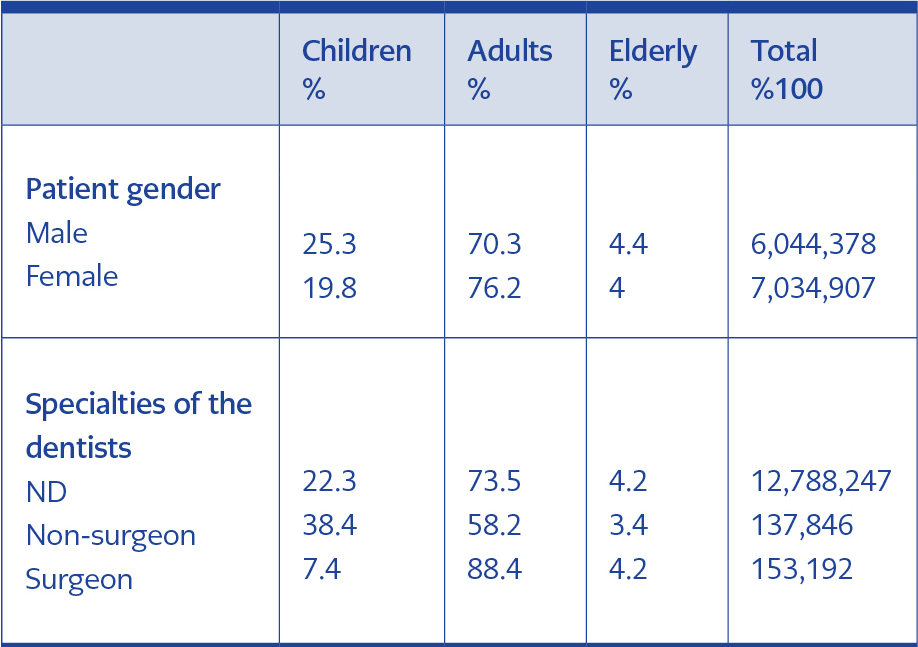 Table 4. Distribution of antibiotics according to patient gender and expertise of dentists grouped by patient age

According to the ATC-4 classification analysis, “J01CR, penicillin combinations (including beta-lactamase inhibitors)” were the most commonly prescribed agents (60.9%), followed by “J01FA, macrolides” (11.5%) and “J01CA, extended-spectrum penicillins” (9.8%) (Figure 1).

ATC-3 classification analysis according to patients’ age group showed that “J01C, beta-lactam antibacterials, penicillins” were the most commonly prescribed agents in each three age groups (84.7% in children, 67.5% in adults and 67.2% in elderly, respectively). These were followed by “J01F, macrolides, lincosamides and streptogramins” (16.2%, 16.8%) and “J01D, other beta-lactam antibacterials” (13.1%, 12.8%) in both adults and elderly groups. In the children group, “J01D, other beta-lactam antibacterials” (10.1%) were the second most commonly prescribed agents, followed by “J01F, macrolides, lincosamides and streptogramins” (4.3%) (Figure 1).

Antibiotic use is considered rational when “patients receive the appropriate medicines, in doses that meet their own individual requirements, for an adequate period of time, and at the lowest cost both to them and the community” (12). To our knowledge, this study is the first to describe the antibiotic prescribing rates in dentistry in Turkey. The antibiotic-containing prescription rate was 82.4% across Turkey. This rate in dentistry was higher than the rate previously reported from India (78.8%) and similar to the rate from Nigeria (82.1%) (13,14). The antibiotic prescription rate among the family physicians in Turkey was 34.9% in 2011 and decreased to 31.1% in 2015, according to data from the PIS (15). Dentists prescribed 11.3% of all common antibiotics (16).

The dentists prescribe a limited variety of drugs such as antibiotics, analgesics, antiseptics and other local pharmaceutical products for oral and dental care (3,16), and 80% of all the prescriptions by the dentists included antibiotics. This extremely high prescribing rate reflects the IUA by the dentists.

NDPP is one of the indicators for rational antibiotic use approved by the WHO (17). In this study, NDPP and NAPP were 2.18 and 1.01 in systemic antibiotic-containing prescriptions. In a previous study from Turkey, these values were 3.2 and 1.1, respectively, in different provinces in Turkey in 2009 (18). Another study using the Social Security Institution database, NDPP was 2.6 in Turkey (19). This value was 2.4 among Indian dentists (15).

Taken together, one can consider that dentists prescribed fewer drugs than other physicians. Studies about dentists’ NDPP are limited. However, physicians’ NAPP was similar (1.1 and 1.05) to dentists’ NAPP in this study (18,20). NDPP was higher in the surgeon group (2.52) than in the non-surgeon (2.06) and NS (2.18) groups. One potential explanation is that prescriptions by surgeons may also include analgesics, antiseptic and anti-inflammatory drugs. Interestingly, NDPP was higher in adults (2.25) than in children (1.96) and the elderly (2.22). However, the reason for this difference is unclear.

The majority of antibiotics were prescribed as enteral formulations (97.6%). The rate of parenteral antibiotic consumption in Turkey was previously reported as 2%. Dentists in Turkey, similar to other physicians, prefer enteral administration (2).

ATC-3 reflects the therapeutic/pharmacological subgroup of drugs. “J01C, beta-lactam antibacterials, penicillins” were the most commonly prescribed agents (71.3%) in ATC-3 analysis for all patient groups by age (Figure 1). In ATC-4 and -5 subgroup analyses, “J01CR, penicillin combinations, including beta-lactamase inhibitors” (60.9%) and “J01CR02, amoxicillin and enzyme inhibitor” (57.6%) were commonly preferred (Figure1,2). The rates were similar to those reported by a study carried out in Croatia; 72.5% of antibiotics were penicillins prescribed by dentists in Zagreb and, 57.6% of them were amoxicillin and enzyme inhibitors (22). Similarly, dentists in Belgium preferred amoxicillin (33.6%) and amoxicillin/clavulanic acid (22.1%) (9). Previous reports about antibiotic prescribing behaviour of dentists indicated that the most preferred antibiotics were amoxicillin/clavulanic acid in Turkey (23,24). Our findings are similar to those reported by a study that analysed antibiotic-containing prescriptions in primary health care facilities in Turkey; “beta-lactam antibacterials, penicillins” were commonly prescribed and amoxicillin/clavulanic acid was the most preferred drug within this group (17). These findings demonstrate that broad-spectrum antibiotics are preferred in dentistry as in other health fields. The widespread use of broad-spectrum antibiotics is an important global issue, as it can lead to antibiotic resistance and other IUA problems.

Therefore, narrow-spectrum antibiotics and a limited number of antibiotics should be prescribed for dental infections (3,25,26).

Broad-spectrum penicillin enzyme inhibitors were the most commonly preferred agents in all age groups at ATC-3, -4 and -5 levels. Penicillins were most frequently prescribed to children, suggesting that dentists do not prefer to prescribe non-penicillin antibiotics to them. This situation may reflect the fact that tetracyclines and quinolones are contraindicated for use in young children.

Surprisingly, Turkish dentists commonly prescribed spiramycin. Spiramycin was the second most commonly prescribed agent (10.7%) according to ATC-5 subgroup analysis, and the second most frequently prescribed antibiotic in adults and the elderly (13% and 14%, respectively) and the fifth most commonly prescribed antibiotic in children (2.5%). Additionally, in a survey from Istanbul, spiramycin was one of the preferred agents of the dentists (23). However, strong evidence was not available for the extensive use of spiramycin in dental infections. In Turkey and some other countries, spiramycin was used in dental infections, although there was a difference between generics and brand-name counterparts in indications. The reason for the common use of spiramycin among dentists in Turkey should be investigated. Similar studies should address the use of fusidic acid, which was not suggested in the current diagnosis and treatment guidelines for dental infections (27). However, it was the eighth-most commonly prescribed antibiotic in adults and the elderly (2.2%). This indicates that some of the dentists do not follow the current diagnostic and treatment guidelines in Turkey and use antibiotics irrationally.

Metronidazole was one of the preferred antibiotics in the management of dental infections owing to its high activity against anaerobic bacteria, which are commonly found in the oral cavity (7,8). Nevertheless, dentists did not prefer to use metronidazole according to this study. Clindamycin is another antibiotic commonly used to treat dental infections (3,7). However, clindamycin was not commonly prescribed in this study (1.6%). In a survey of dentists working in different states in Turkey, clindamycin was frequently prescribed after amoxicillin/clavulanic acid and amoxicillin (26.8%) (25). Investigations carried out in Canada, Belgium, Germany and Norway reported that dentists prescribed clindamycin more frequently than Turkish dentists in this study (1,9,28,29).

Although dentists utilize positive prescribing approaches, it is generally understood that IUA remains a significant challenge. Our findings indicate the training needs of dentists in prescribing antibiotics and rational drug use. In recent years, educational and feedback initiatives related to rational drug use have been implemented for physicians in Turkey. Turkish Ministry of Health established two main antimicrobial stewardship programmes (ASPs) that target the inappropriate usage of antibiotics at hospitals and community. We anticipate that our findings will motivate the development of similar activities for dentists (30).

There are some limitations associated with this study. Socioeconomic status, education level and comorbid diseases of patients were not included. Additionally, the relationships between health institutions (e.g., patient load and culture antibiogram testing) and professional experiences of dentists (except for specialties) and antibiotic prescription were not evaluated. Each of these factors should be addressed in future investigations.

Special Approval: The Turkish Ministry of Health, Turkish Medicines and Medical Devices Agency gave special approval for the use of the data obtained from the PIS.