Scrub typhus is a mite-borne infectious disease caused by Orientia tsutsugamushi, a gram-negative intracellular bacterium. It is a severe public health problem that affects mainly Asia-Pacific areas. Scrub typhus threatens one billion people and causes illness worldwide each year. Approximately one-third of the cases may suffer from multiple organ dysfunction syndrome (MODS) during the disease course. Thrombocytopenia is another critical clinical manifestation of scrub typhus, and thrombocytopenia is one of the causes of MODS. Scrub typhus is rare and hard to diagnose and treat. Given the close similarity in the clinical presentation of several tropical illnesses, a meticulous history and detailed physical examination need to be emphasized. In this study, we reported a case of scrub typhus with thrombocytopenia and MODS, which is only the third case worldwide.

Scrub typhus is a mite-borne infectious disease caused by Orientia tsutsugamushi, a gram-negative intracellular bacterium (1). It is a severe public health problem that affects mainly Asia-Pacific areas. Scrub typhus threatens one billion people and causes illness worldwide each year (2). Scrub typhus is prevalent in many parts of India, but specific data are not available (3). It accounts for 25.3% of acute undifferentiated febrile illness in the country with a community seroprevalence of 34.2% (4). Although the median mortality rate of untreated patients is 6% and that of treated patients is 1.4%, the mortality rate of scrub typhus remains high and can reach up to 70% without proper treatment (5, 6). The clinical manifestations of scrub typhus include acute febrile illness, malaise, high fever, headache, cough, disseminated intravascular coagulation (DIC), pulmonary edema, and hepatic dysfunction. However, the most typical clinical manifestation of scrub typhus is a scab at the site of the mite’s bite. Approximately one-third of the cases may suffer from multiple organ dysfunction syndrome (MODS) during the disease course. Thrombocytopenia is another critical clinical manifestation of scrub typhus, and thrombocytopenia is also one of the causes of MODS (7). 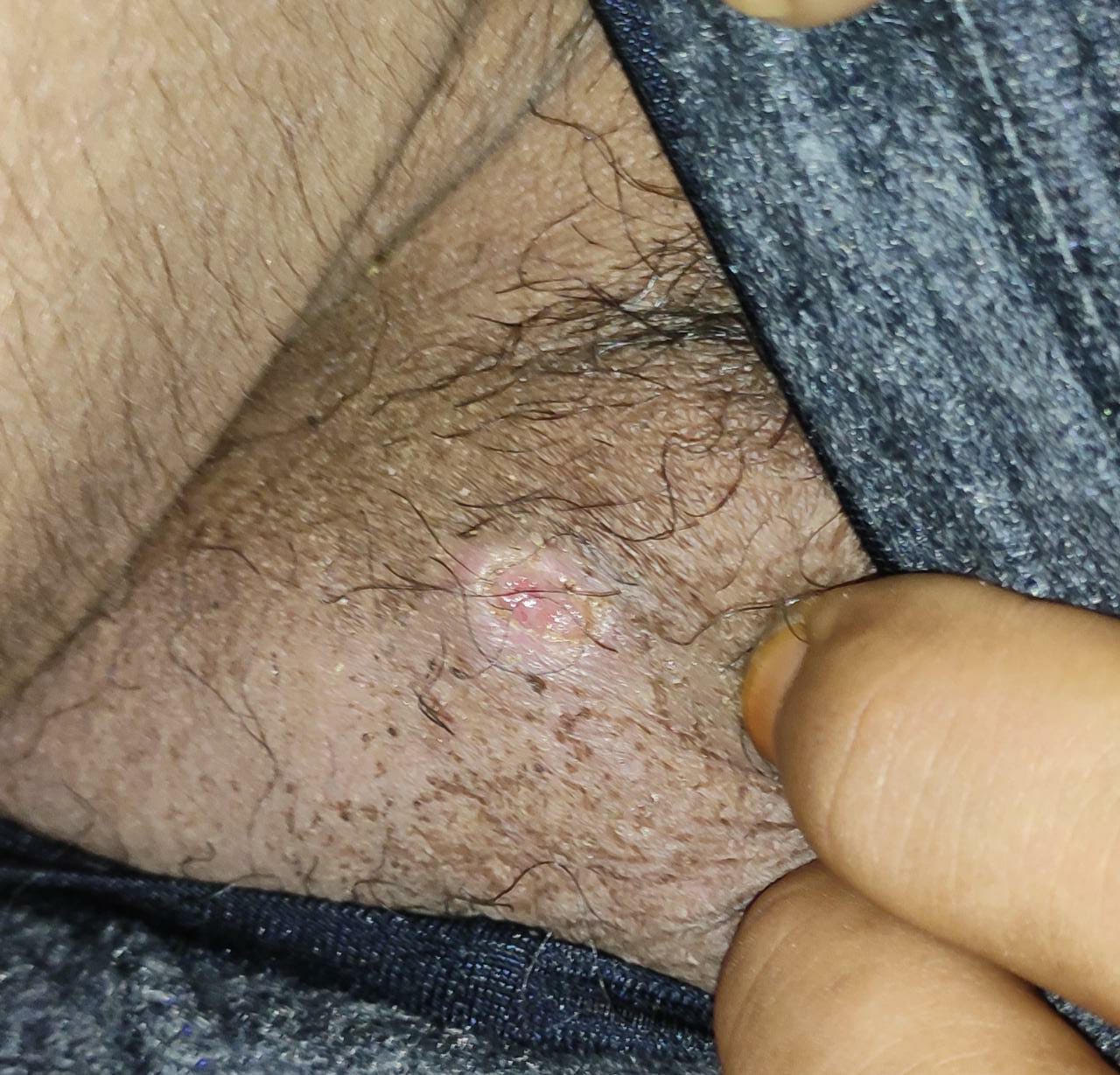 Figure 1. The eschar on the scrotum.

A 17-year-old man, a sanitation worker, was admitted to our hospital with complaints of fever for seven days and diarrhoea with pain abdomen for three days. Two days before admission, he had developed shortness of breath. He denied giving any medical history, except for gastric ulcers treated with unknown treatment protocols. At the time of admission, he was fully conscious. He had a fever (38°C) and was icteric with tachycardia (pulse 110/minute) and low blood pressure (85/50 mmHg). A physical examination revealed the presence of eschar on the scrotum, which was approximately 2 cm×1 cm in size (Figure 1). After careful questioning and a review of his medical history, we noticed that he had received insect bites on his scrotum while in the forest. Laboratory examinations upon admission revealed that hemoglobin was 13.2 g/L, his platelet count was 27 x 109/L, and his white blood cell count was 16,100 cells/L (polymorphs 86%, lymphocytes 10%, eosinophils 0.2% and monocytes 0.2%). His renal function was also abnormal; serum creatinine 1.5 mg/dl (0.6 – 1.2 mg/dl) and urea 67 mg/dl (14 – 40 mg/dl). In addition, his liver enzymes were elevated; serum alanine aminotransferase was 72 (9–66 U/L), lactate dehydrogenase 1592 (313–618 U/L), total protein 5.9 (6-8 gm/ml), albumin 2.0 (3.7 – 5.3 gm/ml), serum total bilirubin 5.3 (up to 1 mg/dl), and serum conjugated bilirubin 1.1 (up to 0.5 mg/dl). C-reactive protein (CRP) was reactive (7.2 mg/L (up to 6 mg/L). Other laboratory tests did not initially show any obvious abnormalities. Based on his clinical history as well as the laboratory and imaging examinations, the following preliminary diagnoses were made: 1) tsutsugamushi disease (scrub typhus), 2) septic shock, 3) hantavirus pulmonary syndrome, 4) thrombocytopenia of unknown origin. Ceftriaxone-sulbactam (1.5 g every 12 hours) to treat the infection, and doxycycline (100 mg twice a day) to treat scrub typhus were used. He received intravenous fluids for symptomatic treatment and Trisoliv syrup  (Medley Pharmaceuticals, Mumbai, India) for liver protection. He also received multivitamin supplements and acid inhibition. At that time, the Widal test, Weil-Felix test, rapid malaria test and blood culture were all negative. A human immunodeficiency virus (HIV) test, syphilis antibodies, and markers for viral hepatitis B and C were also negative. Keeping in mind the possibility of leptospirosis and hantavirus pulmonary syndrome, rapid diagnostic test for leptospirosis and hantavirus IgM ELISA was sought, but these could not be done in our set-up. Since yellow fever does not occur in India, a laboratory test was not sought. However, scrub typhus IgM ELISA was positive. So, on the fourth day after admission, antibiotic treatment was changed to azithromycin 500 mg in 100 ml Normal Saline once daily for three days. After the second day of the change, his vital signs were stable, and the inflammatory indicators gradually decreased. His platelet count increased to 130 x 109/L, and his liver and kidney functions and infection indexes returned to normal. Four days later on, he recovered and was discharged. He did not experience any of the initial symptoms again, and all the indicators remained normal during the next three months.

Scrub typhus is one of the confirmed etiologies of acute febrile illness in tropical regions (9 -11). About a third of patients admitted with scrub typhus have evidence of multi-organ dysfunction (12). Our patient had renal failure, hepatitis, and thrombocytopenia. In this case, our patient’s illness was caused by bug bites, which is a typical cause of tsutsugamushi disease. Because our patient did not pay enough attention to his condition, his condition worsened and finally developed into MODS with immune platelet decline. Fortunately, he received timely and accurate treatment; the prognosis of our patient was good. MODS occurs because of treatment delay. However, because of the urgent condition of the patients, doctors rely on clinical experience and serological gold standard test, i.e., scrub typhus IgM ELISA) to adopt a therapeutic diagnosis, which provides a new way to diagnose complex tsutsugamushi disease. The diagnosis of scrub typhus is a major challenge for clinicians, and as more organs are affected, the rate of misdiagnosis increases. In our case, the laboratory indicators were atypical. The diagnosis of this disease was mainly based on the clinical manifestations (eschar, fever, and MODS), scrub typhus IgM ELISA and diagnostic treatment (azithromycin treatment was effective). Scrub typhus may cause thrombocytopenia and MODS. Previous studies have demonstrated that thrombotic microangiopathic syndrome is the mechanism of thrombocytopenia-associated MODS (13, 14). A series of pathological changes such as thrombotic thrombocytopenic purpura (TTP), secondary thrombotic microangiopathy (TMA), and DIC may occur (13). The early use of antibiotics is very important to avoid life-threatening scrub typhus (15), and a range of efficacious antibiotics are usually available for clinicians.

Given the close similarity in the clinical presentation of several tropical illnesses, a meticulous history and a detailed physical examination need to be emphasized. In this study, we reported a case of scrub typhus with thrombocytopenia and MODS. When people suffer from scrub typhus, we should be alerted in terms of MODS and immune thrombocytopenia.

Informed Consent: Written informed consent was obtained from the patient to publish this case report and accompanying image.

Acknowledgment: We would like to acknowledge laboratory technicians of the Microbiology Department, Civil Hospital, Lunglei, Mizoram, who performed Scrub typhus IgM ELISA. Without their role, this study could not be concluded.