Background: Although there have been significant improvements in treatment strategies, hepatitis C infection is still among the most critical public health problems worldwide. Upon entry of hepatitis C virus (HCV) into host liver cells, many antagonist immune responses are induced, including the production of regulatory T cells (Tregs). The main function of Tregs is coordinating an appropriate immune response, including suppression of this response once it is no longer needed. Tregs protect cells from immunopathologic damage of HCV-specific T cells but, on the other hand, cause viral persistence, cirrhosis and hepatocellular carcinoma (HCC). In this study, we aimed to determine whether the evaluation of Tregs in hepatitis C patients was a useful method for indicating disease chronicity.

Conclusion: Tregs are thought to play an important role in the immunology of HCV infection, thereby providing a promising method for the prediction of disease prognosis and for potentially developing new therapeutic strategies by targeting the Treg.

Hepatitis C virus (HCV), defined as a non-A non-B hepatitis agent in 1989, is a hepatotropic, noncytopathic, positive-stranded ribonucleic acid (RNA) virus from the family Flaviviridae. HCV infection is an acute or chronic necroinflammatory liver disease proven by viremia (HCV RNA positivity) accompanying biochemical markers +/- pathological findings. Serologically, anti-HCV antibodies may be negative in the 45-68 day window period of acute infection, while remaining positive in the blood throughout life, indicating previous HCV infection. It is known that the host immune defense, which is responsible for both healing and tissue damage of HCV, is the main determinant of the severity of necroinflammatory activity (1). The total global seroprevalence of infected people (anti-HCV positivity) was estimated to be 2.8%, corresponding to more than 185 million past or present HCV infections, with the prevalence of viremia in the Turkish population being 0.6% (0.3-1.0) (2, 3). Spontaneous resolution with HCV-specific CD4 and CD8 T cell response can be observed, whereas failure to respond results in 70% of patients displaying chronic hepatitis C (CHC) infections, and in 20-30% of CHC patients cirrhosis, hepatocellular carcinoma (HCC) and end-stage liver failure related transplantations and deaths occur (4). Sustained virological response (SVR) against HCV infection can be achieved with pan-genotypic and genotype-specific direct-acting antivirals (DAAs).

Despite these treatment regimens, the response to treatment often varies across a wide range, depending on the immunological identities of individuals (5, 6). Therefore, identifying immunological markers associated with differences in clinical outcomes is important for improving the response to treatment. Studies show that HCV can escape from the immune response by stimulating the dendritic cells conversion to tolerogenic T cells, suppressing interleukin-12 production and increasing IL-10 production by its viral core, E1 and NS3 proteins (6). Due to the functions of the liver, a high immunotolerant structure also contributes to hepatitis C persistence. The role of regulatory T cells (Tregs)  in the development of chronic hepatitis C by inappropriate immunosuppression causes another harmful immunomodulation, and anti-HCV drugs aim to lower circulating and liver-infiltrating Tregs as part of their therapeutic mechanism (6-8). The main function of Tregs is to develop an appropriate immune response towards infection and to suppress the immune response when it is not required anymore. Tregs, which play a critical role in preventing tissue damage, control the immune response to allo-antigens, pathogens and tumor cells by suppressing activation, proliferation and differentiation of effector CD4, CD8 T cells, B cells, natural killer cells and dendritic cells. Previous studies showed increased levels of Tregs in many other diseases caused by infectious agents such as Epstein-Barr Virus, Mycobacterium tuberculosis, Plasmodium falciparum and helminth, as well as HCV (6).

Similarly, in the studies carried out in patients with hepatitis C, Treg levels were higher in chronic hepatitis C (CHC) patients than healthy controls and HCV infections, resulting in viral clearance, and asymptomatic CHC patients than those with active liver disease (9). CD25 (interleukin 2 receptor alpha chain) and CD4 on the Treg membrane are the first markers to purify and isolate these cells. Then, forkhead box P3 (FoxP3) transcription factor, a marker of activation in chronic infection, was identified. However, since CD25 and FoxP3 can also be expressed by effector T cells, CD4+CD25highFoxP3+ expression is insufficient in Treg expression. The long-term downregulation of another recently identified surface marker, CD127 (IL-7 receptor), and the expression of CD152 (cytotoxic T lymphocyte-associated protein, CTLA-4) are promising, in particular, to distinguish patients with CHC infection (9, 10).

In the literature, there are not many studies evaluating the expression of CD4, CD25, FoxP3, CD127 and CD152 markers together using flow cytometry for assessing Treg percentages in CHC patients (11, 12). Here, we focused determining whether evaluating the distribution of peripheral blood CD4+CD25highFoxP3+CD152+CD127low Treg in non-cirrhotic CHC patients could be a helpful marker in the prediction of the prognosis and follow-up of the disease.

The ethics committees of the hospital reviewed and approved this study, which is in accordance with the non-pharmaceutical clinical researches guidelines of the institutions and with the Helsinki Declaration of 1975, as revised in 1983. Written informed consent was obtained from all patients.

We included the patients:

We excluded the patients:

Peripheral blood samples were taken from the participants in a 2-ml tube with K2 EDTA, and the samples were analyzed using flow cytometry immediately after blood collection.

SIBM SPSS Statistics for Windows, Version 22.0 (Armonk, NY: IBM Corp.) was used for the statistical analysis. The compliance of the continuous variables to the normal distribution was analyzed using the Shapiro-Wilk test, and the homogeneity of group variances was evaluated with Levene’s test. The significance of the difference between the two groups, for the parameters with normal distributions and homogeneity of group variance, was evaluated by Student’s t-test, and the results were expressed as mean and standard deviation (x ± ss). Mann-Whitney U test was used to compare nonparametric data, and the results were expressed as median and quarter values (median, Q1-Q3). Spearman’s correlation analysis was used to investigate the relationships between variables. The results were evaluated with 95% confidence intervals, and the statistical significance was set at p < 0.05. 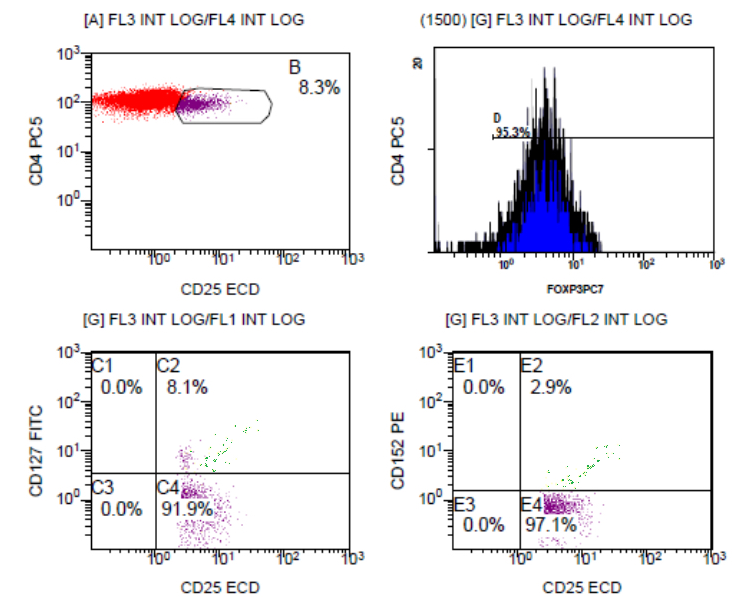 Figure 1. The timeline of the case, summary of the disease, symptoms, treatments, and complications.

In the evaluation of non-cirrhotic chronic hepatitis C patients included in the study, 26.6% (n: 8) stated that they did not know which way they took HCV and were diagnosed in the examinations performed at admission to the hospital for other reasons. The most common routes of transmission were surgical intervention (12, 40%), blood transfusion/diseases requiring transfusions (4, 13.3%) and PWID (3, 10%), respectively. Most of the patients had asymptomatic hepatitis C infection (19, 63.3%), the most common complaints in the acute period were non-specific (6, 20%), such as fatigue, weakness and muscle pain. The other findings were jaundice, nausea, darkening urine color and itching. None of the extrahepatic findings, such as cardiovascular, neuromuscular, autoimmune, endocrinological, nephrological involvement of hepatitis C, were reported.

Considering HCV genotypes which are still valuable in determining the treatment strategy of the patients; The most frequent genotype of HCV was 1B (27, 90%) in accordance with the research carried out in our country, genotypes 2A, 3A and 4 were also found (3). 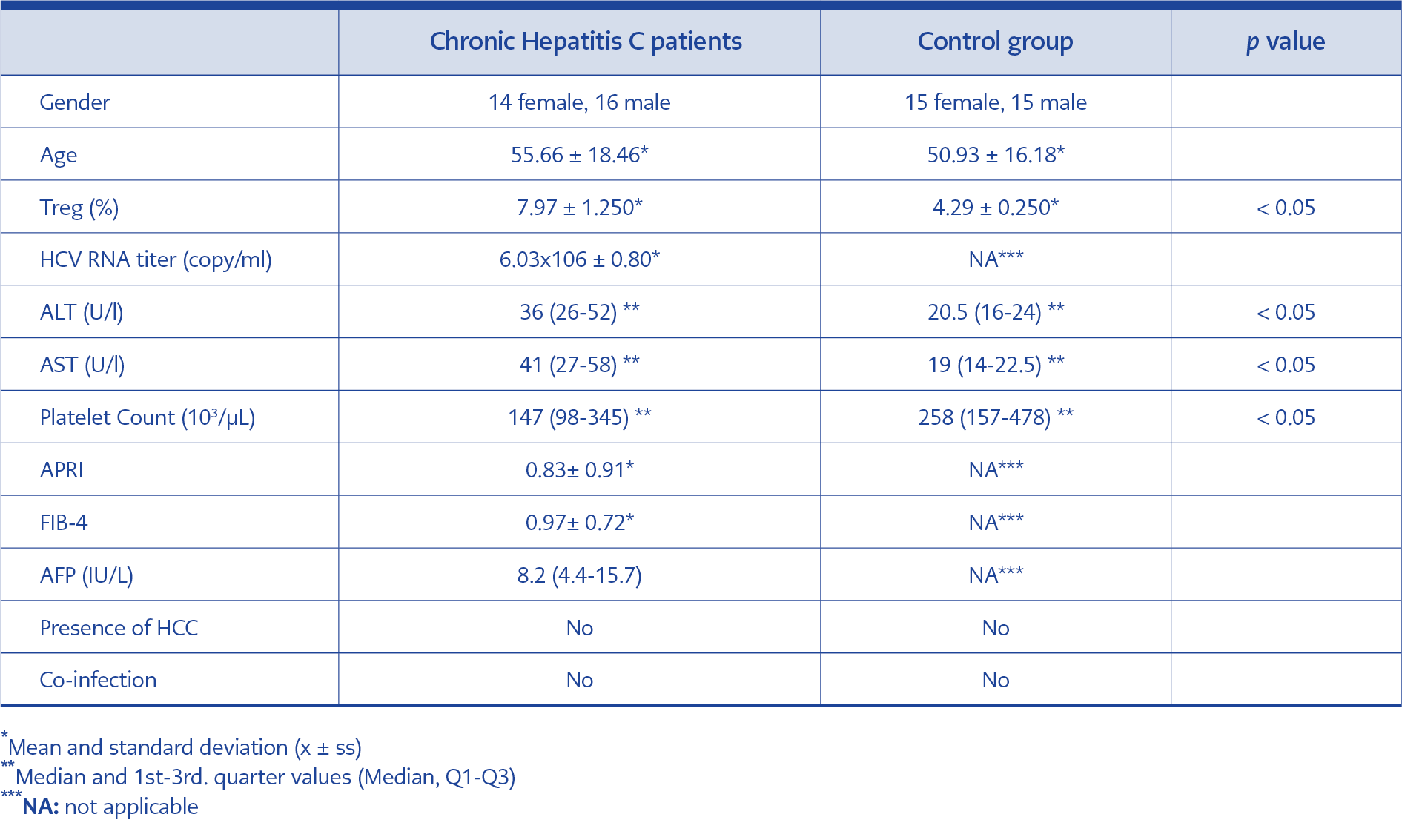 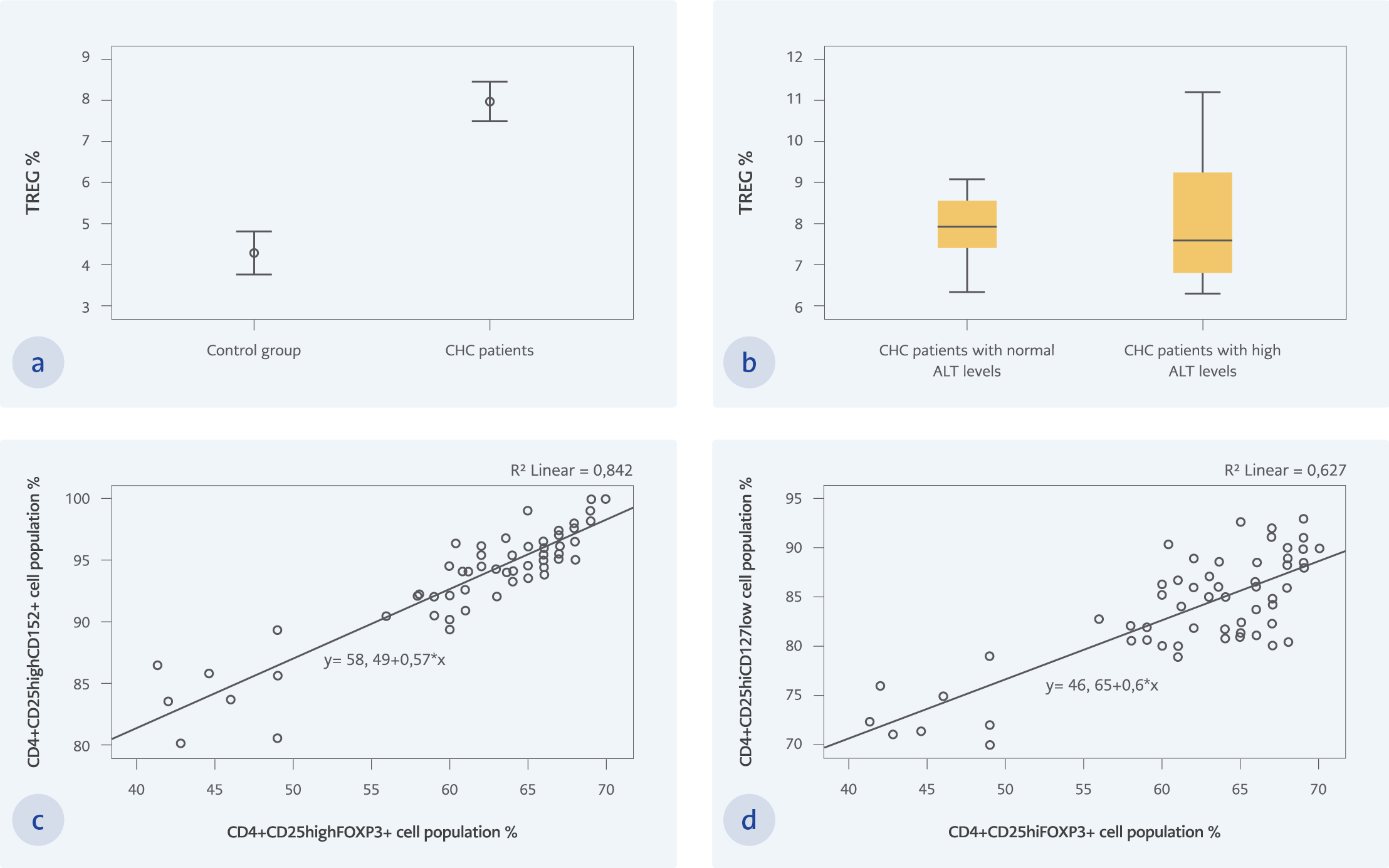 Treg percentages of all volunteers included in the study were evaluated; The Treg percentages of the subjects with non-cirrhotic chronic hepatitis C infection (7.97 ± 1.25) were significantly higher than those of the healthy control group (4.29 ± 1.37) (p < 0.05) (Figure 2a).

There was a strong correlation (r=0.711, p < 0.05) between serum AFP levels and Treg percentage in CHC patients.

HCV infection is a major cause of chronic liver disease and a public health problem with approximately 71 million chronically infected individuals worldwide (4). Accordingly, the World Health Organization (WHO) goal of eliminating HCV by 2030 is based on three main actions: strengthening and increasing outreach screening, increasing access to treatment, and improving prevention (14). Clinical care for patients with HCV related liver disease has advanced thanks to an enhanced understanding of the pathophysiology of the disease and developments in diagnostic techniques coupled with improvements in therapy prevention (5). However, despite the INF-free treatment regimens, the course of hepatitis C infection is determined as a result of a complex scheme involving the interaction of natural and acquired immune responses. In our study, we detected peripheral blood Treg percentages in patients with non-cirrhotic CHC by flow cytometry, which has become a more widely used method in microbiology to determine infectious agents and the immunological response to them. Then, we compared results with the other markers often used in the diagnosis and follow-up of the disease (6, 15, 16).

Because acute HCV infections are usually subclinical, anicteric and often become chronic, there is very limited data on acute hepatitis C infection in the literature (4, 17). Therefore, we thought that the reason chronic hepatitis C patients included in the study were unaware of the transmission route was related to the natural course of the disease.

In our study, we evaluated Treg percentages in non-cirrhotic chronic stage hepatitis C patients. Consistent with the previous studies, the percentage of CD4+CD25highFoxP3+CD152+CD127low Tregs was significantly higher than those of the healthy controls (6, 16, 18).

It was thought that the reason there was no statistically significant relationship between the percentages of Treg and ALT/AST levels might be the fact that the mean ALT/AST levels of the patients included in the study were relatively low (9, 22). Although the percentages of Treg in normal ALT levels were higher than those of the patients with high ALT levels, no statistically significant difference was observed in percentages of Treg between CHC patients with high ALT levels and normal ALT levels (23). Likewise, there was no correlation between APRI and FIB-4 scores and Treg percentages, probably because the AST and platelet values used in this scoring did not deviate much from the normal values due to the relatively mild clinics of the CHC patients included in the study (24).

Although none of the CHC patients included in the study had HCC, there was a strong correlation between the percentage of Treg and the serum AFP level, which is used as a marker in the follow-up of HCC development. These data are in line with the results of the studies, which showed that increased Treg levels were correlated with serum AFP levels. In the same studies, it was also suggested that Treg percentage change could be used as a marker to predict HCC progression (25-27).

It was thought that the higher expression of CD4+CD25highCD127low and CD4+CD25highCD152+ used to show Treg distribution compared to CD4+CD25highFoxP3+ may be related to difficulty in the intracellular staining procedure of FoxP3 (17, 28).

The functions of Tregs may be a double-edged sword in viral hepatitis infections. Although Tregs suppress T cell responses directed against the hepatitis viruses, they also play a protective role by downregulating immune-mediated mechanisms of liver damage. However, the factors that influence which of these mechanisms will prevail are not clearly understood. An enhanced understanding of the genetic and immunological factors leading to the resolution or persistence of hepatitis C infections may contribute to the prediction of prognosis and development of new therapeutic strategies targeting the Treg.

Informed Consent: Written consents were obtained from the patients.

Financial Disclosure: This study was carried out with the contribution of the İzmir Katip Çelebi University Scientific Research and Project Fund.

Scientific presentation: This study was presented as an oral presentation at the 4th National Clinical Microbiology Congress held between 8-12 November 2017 in Turkey.