Background: Hydroxychloroquine (HQN) and azithromycin (AZ) were used in the treatment of coronavirus disease 2019 (Covid-19), which might lead to cardiac side effects.

Aim: We aimed to describe the safety of HQN and HQN+AZ in terms of cardiac events.

Materials and methods: The QTc intervals were calculated by examining the ecg records of the first day and fifth day of hospitalization the patients who received HQN with or without concominant AZ for treatment of Covid 19.

Conclusion: Close ECG monitoring is necessary, and  the frequency of ECG monitorization should be individualized in patients receiving azithromycin with hydroxychloroquine.

Numerous publications are published on the safety of hydroxychloroquine and azithromycin therapy used in the treatment of COVID-19. In this study, the cardiac side effect rates of these two drugs were found to be compatible with the literature and routine clinical practise.

The first case of COVID-19 was reported on 10 March 2020 in Turkey (1). Various treatment options have been used in all countries because of the lack of proven treatment (2). Among these options, hydroxychloroquine (HQN) and azithromycin (AZ) combination is expected to treat the disease (3). These two drugs have been used among the patients with moderate levelslevel of disease in many countries since the first day of the diagnosis of symptomatic disease.

HQN is used to treat autoimmune diseases and malaria; AZ is used in the treatment of various infections (4,5). When used in their indications, the common side effect is QTc prolongation in electrocardiography (ECG) (6,7). Development of torsades de pointes, which is a form of polymorphic ventricular tachycardia, is the most undesirable situation in QTc prolongation.

Continuous variables were presented by mean and standard deviation, whereas categorical variables by percentages. The paired t-test was used in comparison ofto compare paired mean values;valuses, otherwise, the Mann-Whitney U test was used. Categorical variables were compared with a chi-square and Fisher exact test. Statistical analysis was performed using IBM SPSS Statistics 22. Statistical significance was set as p < 0.05. 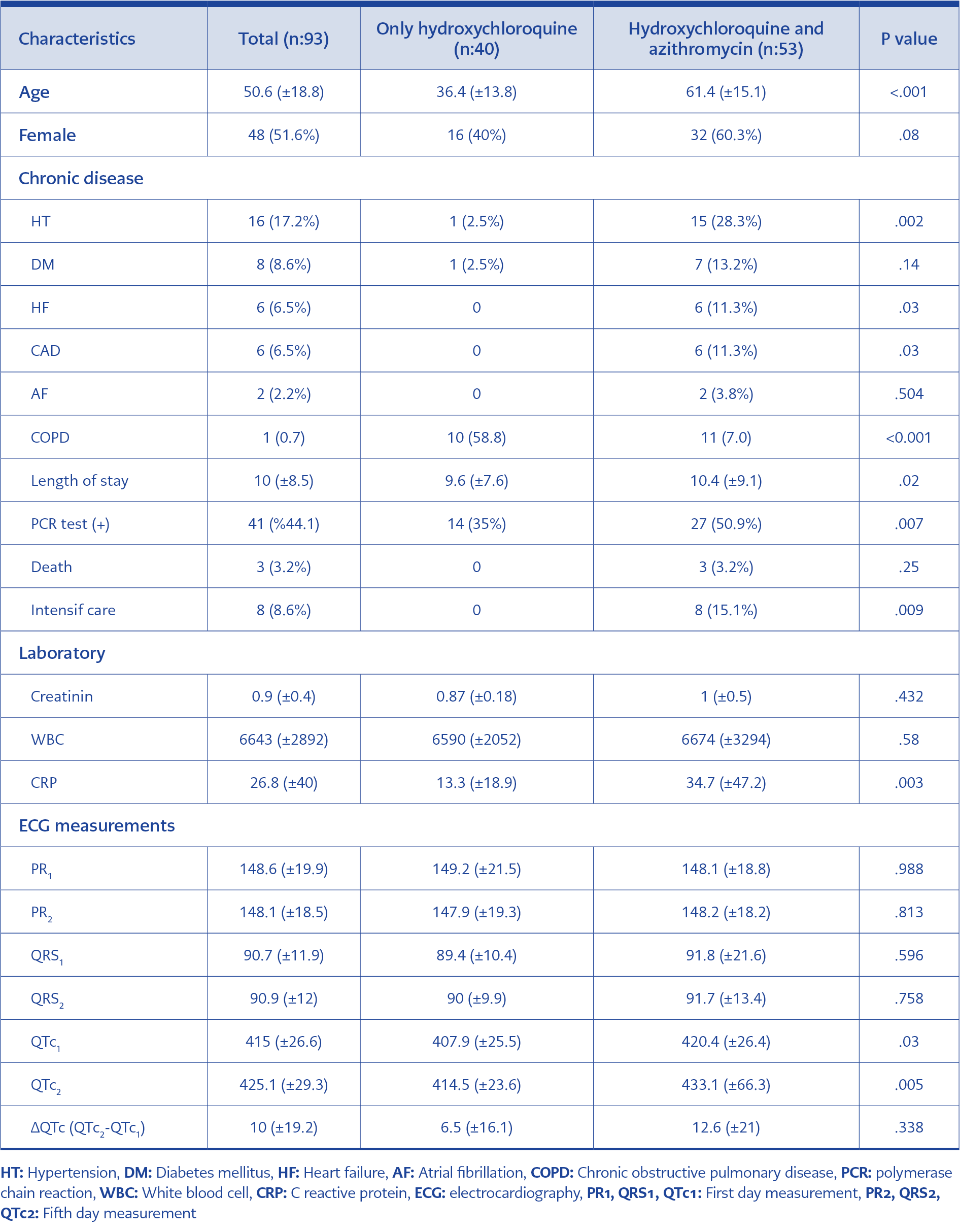 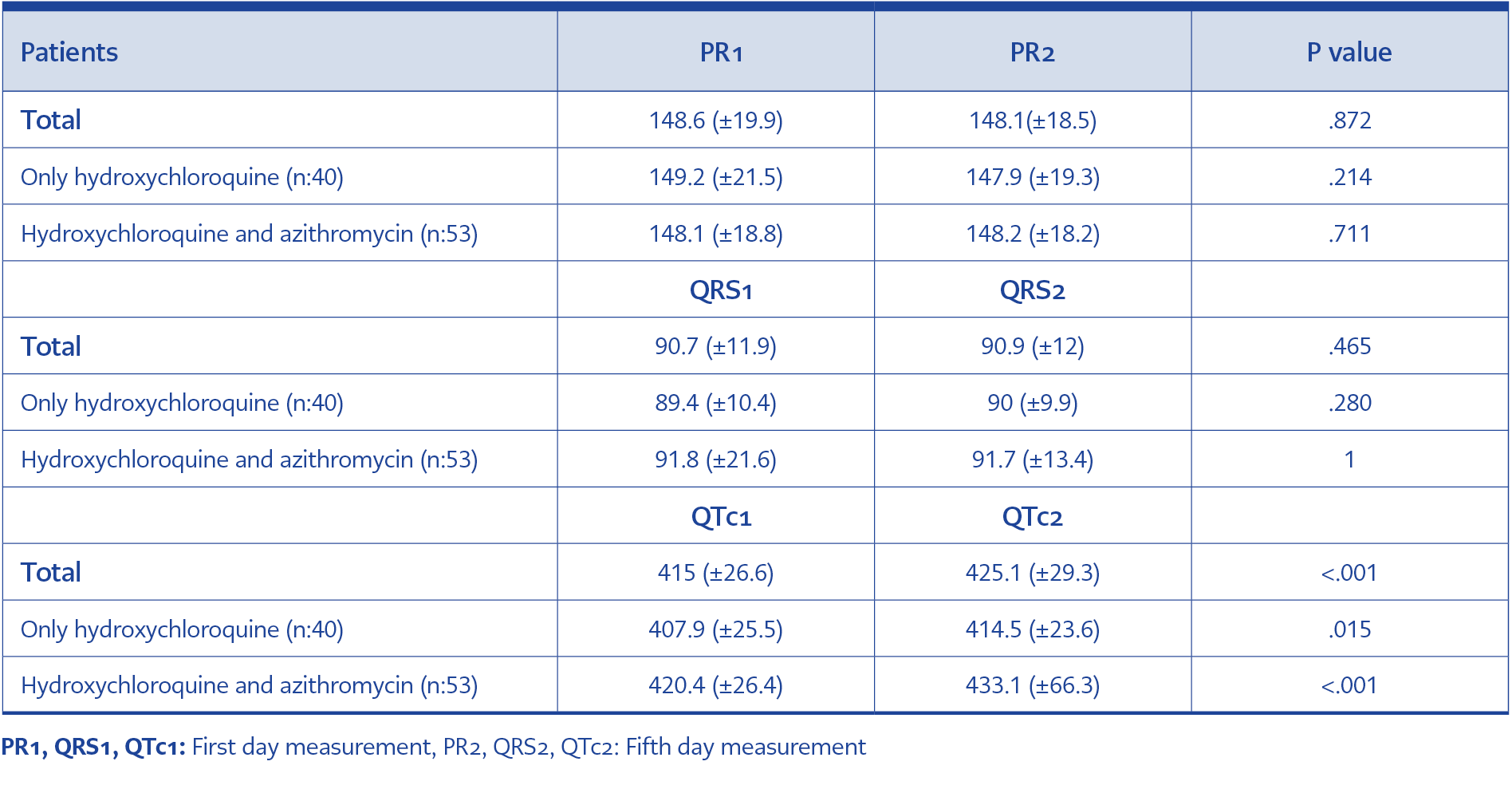 The finding of ECG werewas detailed in Table 2. The QTc interval exceeded 470 msec in four patients, and in two patients, the QTc was prolonged > 40 msec. Moderate prolongation was detected in six patients (6.45%). QTc interval exceeded 500 msec in three patients and all of them were female in the combination therapy group. In two of these three patients, the QTc prolonged > 60 msec. The QRSother patient’s QRS duration was calculated as 144 msec on the first ECG and 142 msec on the second ECG. Therefore, JTc interval was evaluated on this patient. The first JTc interval was 346 ms, and the second JTc distance was 364 ms. This patient was not evaluated as critical QTc prolongation. Critical QTc prolongation was detected in two patients (2.15). Also, in the combination therapy group, this ratio was 3.7. One of the patients was admitted with acute atrial fibrillation and a beta-blocker was started, and then a sinus rhythm was provided by cardioversion.

In total, three patients died (3.22%). The cause of death was reported as acute respiratory distress syndrome and no cardiac complications, including QTc prolongation, were detected in these patients.

Since there was no specific drug for treatment, a variety of drugs were used in COVID-19 infection. Turkish Ministry of Health suggested HQN or HQN+AZ. Despite the frequent use of HQN for autoimmune diseases, reported cardiac side effects were limited in the literatüreiterature (10). However, it is known that it has effects on the conduction system by blocking potassium ion channels in the heart. Although side effects such as PR interval prolongation, QRS duration widening and atrioventricular block are also observed, QTc prolongation seems to be a more serious side effect recently (11). While this side effect was known to be rare by using for more than one year or acutely with eroverdose, recently the rate of side effects was reported up to 21% in using short-term and therapeutic dose (9, 11,12). In our study, no detection of QTc prolongation with HQN dose, was400 mg daily (total 2 gr), seems to be more compatible with literature and clinical practice.

AZ is a macrolide group antibiotic that is still used in respiratory and urinary tract infections (5). It is known that the drug affects multi-ion channels and causes heart conduction problems, especially QTc prolongation. Therefore, it is avoided to be used in elder ages, especially >60 years of age, because of the increased ratio of this side effect (13).  Two drugs were previously used for three days in malaria treatment, and QTc prolongation was detected with no critical side effects.

Almost all the hospitalized patients in Turkey received treatment for at least five days, and this period was extended to 10 days as a result of clinical evaluations. At the end of the fifth day, we found critical QT prolongation in two (3.7%) patients receiving HQN and AZ combined therapy. One of the patients was on antiarrhythmic therapy, and the other one was 82 years old.

In conclusion, close ECG monitoring is necessary, and  the frequency of ECG monitorization should be individualized in patients receiving azithromycin with hydroxychloroquine.