“One Health” and Promoting the Concept in the Journal

One Health is an innovative global approach aiming  to tighten the collaboration and communication in all aspects of  human, animal and environmental health. The areas of One Health approach include food safety, the control of zoonoses and combatting antibiotic resistance (1). The term “one health” was first introduced to the scientific community at an Expert Consultation in Canada in 2009, but the concept has been well known since 1800s (2). Dr. Rudolf Virchow (1821-1902) coined the term “zoonosis” to indicate an infectious disease that is passed between humans and animals (3).

One Health concept supports the multidisciplinary approaches to zoonotic diseases. The direct link between human and animal health supports the fact that the majority of the human diseases are animal originated. Scientists estimate that more than six out of every ten known infectious diseases in people are spread from animals. In addition, three out of every four of new or emerging infectious diseases in people are spread from animals (4,5).  It’s estimated that, every year about a billion people become ill because of zoonoses and millions of them die (4).

The main goal of One Health approach is to better understand the complex mechanisms affecting the humans, animals and the environment because there is an urgent need to control the spreading of infectious diseases and possibly to prevent the future threats. Rapidly spreading zoonotic diseases and growing antimicrobial resistance are important challenges and deserve attention at the local, national and global levels. Many of the microbes infect both animals and humans, as they share the eco-systems. Also in a world that people can easily pass the borders; so can  the microbes. Efforts by just one sector or by one country can not prevent or eliminate the problem. 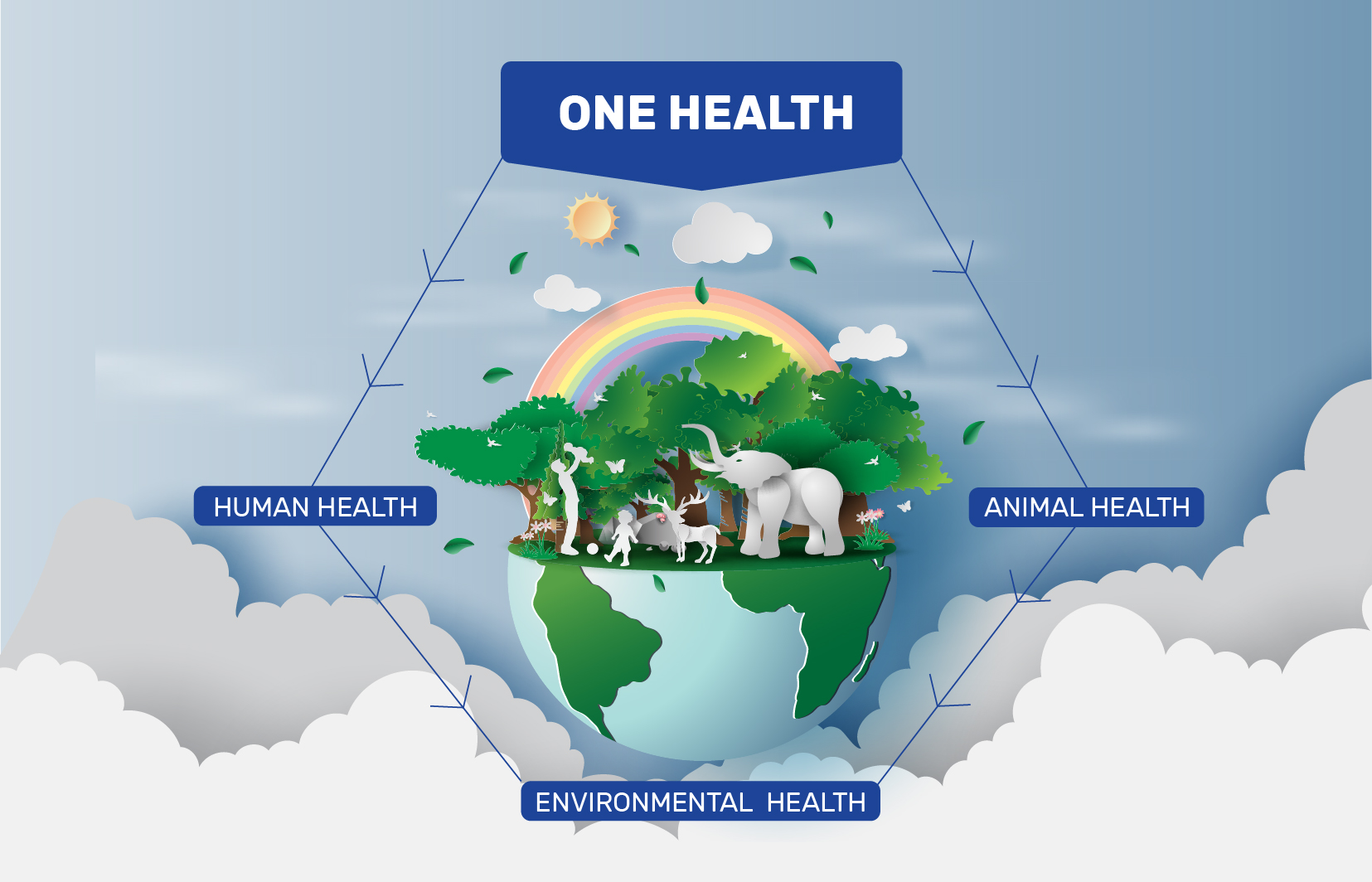 For One Health approach, World Health Organisation (WHO) works closely with the Food and Agriculture Organization of the United Nations (FAO) and the World Organisation for Animal Health (OIE). The aim of these organisations alltogether, in the context of one health, is to promote multi-sectoral responses to food safety hazards, risks from zoonoses and other public health threats such as antimicrobial resistance and provide guidance on reducing these risks. Many professionals with a range of expertise who are active in sectors, such as public health, animal health, plant health and the environment, also join these efforts. Particularly for the prompt recognition and implementing the precautions, clinicians have an important role because taking the emerging and re-emerging zoonoses into consideration in the differential diagnosis is the first vital step in the diagnosis, management and control of a public threat (6).

The global burden of zoonoses is very high as assumed but the economic burden is disproportionately high in limited-resource countries because many people live on husbandary and agriculture. Also the healthcare systems and technological supply for diagnosis and prevention of emerging and re-emerging zoonoses are not adequate (7). The One Health approach requires all the countries working together to tackle public health threats.

Rabies and influenza are the two demonstrative examples in this context of multidisciplinary collaboration to adress the health threat at a human-animal-ecosystem level (8).  For instance, rabies in humans is effectively prevented only by targeting the animal source of the virus (for example, by vaccinating dogs). Rabies control aims to achieve WHO’s “Zero by 30” global strategic plan: to end human deaths from dog-mediated rabies by 2030 and this goal mandates working the veterinarians, doctors and governments all together (9). Influenza viruses circulating in animals is crucial to the selection of viruses for human vaccines for potential influenza pandemics (8).

In addition to zoonotic diseases, which seem to be the main area of One Health, antimicrobial resistance is also one of the main areas of interest from One Health view because antmicrobial resistance threatens public health seriously and requires action across all sectors and goverments. WHO reports that antimicrobial resistance is putting the gains of the Millennium Development Goals at risk and endangers achievement of the Sustainable Development Goals (10). The antimicrobial pipeline offers some choices but is devoid of completely new drugs. In addition to this inefficient supply, new resistance mechanisms are emerging and spreading globally. Misuse and overuse of antimicrobials is accelarating this spread which is associated not only with human use but also with usage in animal husbandary. Of the all the antimicrobials used; 72.5% are used in animals and 27.5% used in humans (11). Some uses in animals, such as for the treatment of bacterial infections, are appropriate. However, among the antimicrobials used in animals approximately 70% are used for non-therapeutic purposes (12).

For the public awareness, a global “One Health Day” was planned as “November 3” in 2016 and supported by many institutions and associations. The One Health Day provides an opportunity for the experts and the community to join and talk about One Health issues (13, 14).

The success of One Health concept certainly requires breaking down the interdisciplinary barriers between human medicine, veterinary medicine and environmental sciences.

The role of Infectious Diseases and Clinical Microbiology (IDCM)

Here in the Journal, the editors actively promote One Health concept, on one hand encouraging all partners from all sectors to share their experiences and on the other expediting  the peer review process  of the papers on this topic. Thus, we aim that IDCM is to become a commmon platform for scientists not only from human medicine, but also veterinarians and environemental scientists are welcome to submit their reasearch.