Nasopharyngeal Carriage and Serotype Distribution of Streptococcus pneumoniae in Elderly: A Cross-sectional Study in Turkey

Objective: The incidence and mortality of invasive pneumococcal disease are much higher in people over 65 years compared to the general population. The incidence of the disease and the distribution of serotypes changed with the spread of childhood conjugate pneumococcal vaccines and the use of vaccines in the adult age group. Nasopharyngeal carriage is an important stage in the disease pathogenesis. In this study, we aimed to determine the pneumococcal carriage prevalence and serotype distribution in adults aged ≥ 65 years living in a nursing home.

Materials and Methods: The nasopharyngeal swabs were taken from ≥ 65 years old people living in Narlıdere Nursing Home. The specimens were cultured and pneumococci were isolated according to colony appearance, optochin sensitivity and solubility in bile salts. Pneumococcal serotypes were identified using the capsule swelling reaction.

Invasive pneumococcal disease (IPD) caused by Streptococcus pneumoniae is an important cause of morbidity and mortality among young children and adults 65 years and older. S. pneumoniae is one of the most important causes of serious diseases, such as pneumonia, meningitis, and bacteremia (1). According to 2018 surveillance data from US Centers for Disease Control and Prevention (CDC), the incidence of IPD in the general population was 9.6/100,000, while the mortality rate was 1.06/100,000. The incidence rate of IPD (24/100,000) and the mortality rate were also much higher in people over 65 years than the general population (2). The IPD surveillance systems in Turkey and Middle East Region are largely inadequate, resulting in a lack of knowledge of the true incidence of IPD. Overall, studies generally observed a high burden of IPD among adults in this region (3).

Nasopharyngeal (NP) pneumococcal carriage is often asymptomatic, but also it is the first and most important stage in the disease’s pathogenesis. NP carriage varies between 20% and 50% in children and 2%-30% in healthy adults (6, 7). As the childhood pneumococcal vaccination effort has expanded, vaccine serotype pneumococcal carriage and disease have decreased in children and unvaccinated adults. The serotype distribution has also changed. In particular, the carriage prevalence of non-pneumococcal conjugate vaccine 13 (PCV13) serotypes has increased (8, 9). The epidemiology of pneumococcal disease and carriage should be followed to monitor the effectiveness of current pneumococcal vaccination programs. The World Health Organization (WHO) Pneumococcal Carriage Working Group recommends conducting NP carriage studies regularly (10).

In this study, we aimed to determine the prevalence of overall pneumococcal nasopharyngeal carriage and risk factors for carriage; the prevalence of PCV13 serotype carriage; and serotype distribution among adults ≥ 65 years of age who live in a nursing home in İzmir, Turkey.

The research was planned as a cross-sectional study. The study was conducted at the Narlıdere Nursing Home Elderly Care and Rehabilitation Center, İzmir/Turkey. İzmir is the third most populous city of Turkey and located in western Turkey. Of the population, 9.6% is ≥ 65 years old in Turkey, 17.1% in İzmir (12). The nursing home is located in Narlıdere, western part of İzmir, and most of the residents are people with a high level of education, good socioeconomic status, low comorbid diseases, and high physical activity.

Inclusion criteria were current residence in the nursing home, age ≥ 65 years, and willingness to participate. We visited the facility on weekdays between March 9 and March 31, 2017. The residents were called from their rooms and informed about the study, and those who agreed to participate in the study were invited to the medical unit of the nursing home for sampling. Informed written consent was obtained from all participants. We interviewed all participants to obtain their sociodemographic and medical history data. This information was recorded using a standard questionnaire.

One NP sample was obtained using a swab with a flexible aluminum shaft for each adult. The samples were transported to the laboratory using Stuart transport medium and processed within 8 hours. The samples were inoculated on BD Columbia agar with 5% sheep blood and incubated for 18–24 h at 35–37ºC with 5% CO2 (in a candle jar). On a blood agar plate (BAP), colonies that were small, grey, and moist (sometimes mucoidal) with a zone of alpha-hemolysis (the colonies become flattened, and the central portion becomes depressed as the culture plate ages) were considered to be S. pneumoniae and were examined for further identification. The catalase test was applied to colonies showing pneumococcal morphology. Catalase-negative colonies were examined using Gram staining. Colonies with Gram-positive diplococci were inoculated on a BAP and incubated under the same conditions for purification. The optochin susceptibility test was used for S. pneumoniae identification with bile solubility as a confirmatory test. The S. pneumoniae ATCC 49619 strain was used as a positive control.

Capsule serotypes were determined by co-agglutination and capsule swelling (Quellung) reactions, which are accepted by the WHO as the reference methods (10). We used pneumotest plus (Serum Statens Institute, Denmark) containing capsule antisera against the serotypes included in PPSV23, which are known as the most common cause of IPD (13).

1. Bacterial suspension preparation: We used a sterile loop to prepare a light to moderate cell suspension (approximately equal to a 0.5 McFarland density standard) from overnight growth on BAP (18–24 h at 35–37°C in a candle jar) in 300 µl of phosphate-buffered saline (PBS).

2. Antisera preparation: A homogeneous suspension was prepared by mixing 100 μl of sterile PBS and 100 μl of antiserum. The mixture was stored at +4ºC and used for one week.

4. The test mixture and the negative control were covered with a coverslip, and the capsule-swelling reaction was evaluated with an x100 objective (x100 magnification) after 5 min.

Ethical approval was obtained from the Noninvasive Research Ethics Committee of Dokuz Eylül University as Decision No. 2016/31–31. Permissions were obtained from the Narlıdere Nursing Home Elderly Care and Rehabilitation Center Directorate and the Republic of Turkey Ministry of Family, Labor, and Social Services.

The statistical analysis was performed using the Statistical Package for the Social Sciences (SPSS) 22.0 (IBM Corp., Armonk, NY, USA). Descriptive statistics (the median and interquartile range or percentages, as appropriate) were used to summarize each sociodemographic and clinical variable included in the questionnaire. A Mann-Whitney U test was used to compare the continuous variables. The carriage was evaluated in terms of categorical variables using a chi-square test or a 2-sided Fisher’s exact test when appropriate. A multivariate logistic model was applied to investigate demographic characteristics (age and sex) and clinical features (presence of comorbidities and other factors) associated with pneumococcal carriage. Statistical significance was set at p<0.05.

Characteristics of the Study Population 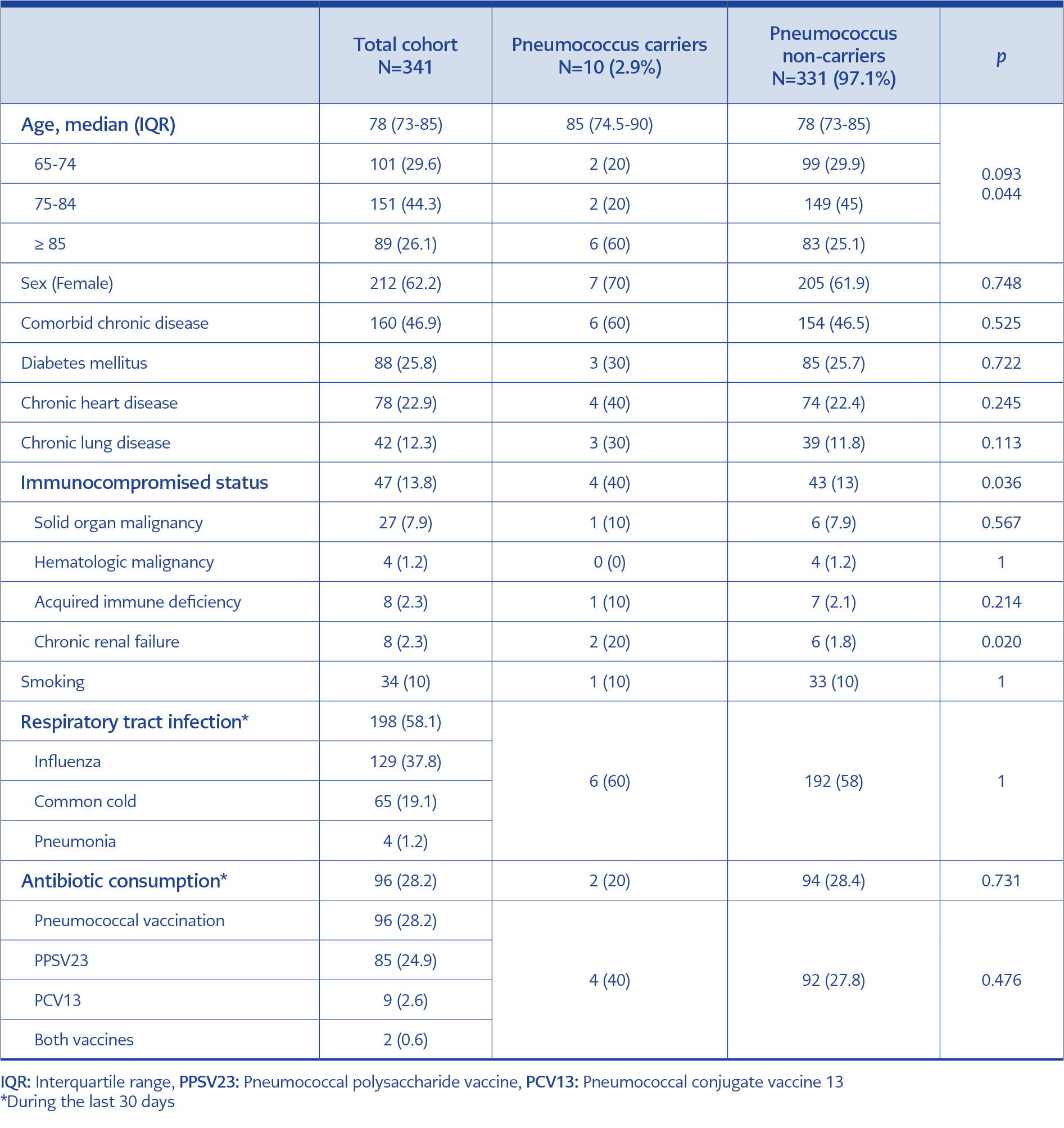 As PCV13 vaccination in adults increases in Turkey, it is expected to cause shifts in the distribution of serotypes that cause colonization and disease. According to our study results, PCV13 covers 20% of the serotypes isolated. In similar studies from Europe, the coverage of PCV13 varied between 9.1% and 51.4% (16, 19, 20, 22, 23). In a recent study from Japan, 18.2% of the participants carried a pneumococcal serotype included in PCV13 (24). These studies have been conducted in various countries, at different time periods, with different age groups, and using different methods. Therefore, serotypes that cause NP colonization and the percentage of vaccine coverage varied between studies. Geographical characteristics, socioeconomic and genetic factors, and vaccination policies of countries affect pneumococcal carriage. Each country must establish a national and regional surveillance system to monitor pneumococcal serotypes.

The study was conducted in İzmir Narlıdere Elderly Care and Rehabilitation Center. People living in this center are generally a group of people with a high level of education, good socioeconomic status, low comorbid diseases, and high physical activity. For this reason, the results of our study may not reflect the public. In their population-based study, Almeida et al. showed that pneumococcal carriage percentages were different among the participants living in rural vs urban living areas and retirement home vs family home residents (16). The participants enrolled in the study could induce selection bias because this population tends to have better physical activity and be less care dependent. However, there was no difference in demographic characteristics between the study participants and the other residents.

Although this study was conducted at a single center in a limited geographic setting, a high number of subjects were included. Results showed that pneumococcal colonization in older people is uncommon and that most of the isolated serotypes are not PCV13 serotypes. The monitoring of pneumococcal carriage and serotypes can offer useful information about the circulation of this pathogen among older people as well as the potential protective effect of pneumococcal vaccines.

Ethical Approval: Dokuz Eylül University Noninvasive Research Ethics Committee approved the study with the decision number of 2016/31–31. Permissions were obtained from the Narlıdere Nursing Home Elderly Care and Rehabilitation Center Directorate and the Republic of Turkey Ministry of Family, Labor, and Social Services.

Informed Consent: Informed written consent was obtained from all participants.

Acknowledgments: We thank Assoc. Dr. Nil Tekin for her help and support at the Narlidere Nursing Home Elderly Care and Rehabilitation Center. We thank Prof. Dr. Vildan Avkan-Oğuz and Prof. Dr. Nur Yapar for their laboratory and material support.