Objective: Contact precautions (CP) for the prevention of multidrug-resistant organisms (MDROs) in endemic countries is a critical element of infection control (IC) practices. In this study, we assessed the effectiveness of empiric CP on admission to the hospital in an MDRO endemic region.

Methods: The study was carried out in a 300-bed private hospital from January 2016 to September 2018. The CP indications on the day of hospital admission were decided based on determining risk factors such as long term care patients (Group 1), patients with catheters and/or interventions (Group 2), transferred from another hospital (Group 3), patients with known colonisation with MDRO (Group 4), patients with other risk factors (Group 5).

Conclusion: Risk assessment-based isolation precautions from the day of hospitalisation in an MDRO endemic country were found to be important among high-risk patients such as patients with catheters and/or interventions, long-term care patients and patients transferred from another medical centre. Implementation of risk-based CP than the culture-based IC strategies might be an effective approach in an MDRO endemic region while pending culture results.

The limited options for treating MDR pathogens increase the impact of infection control practices in acute care hospitals. Contact precautions (CP) is the main element for preventing MDR pathogens in endemic countries; in addition to hand hygiene and environmental cleaning, the CDC recommends it in the presence of certain multidrug-resistant organisms (MDRO) (4,5). However, indication and the appropriate time for implementation of CP is critical. Culture-based CP is the general approach in hospital settings, and CP was administered after isolation of MDRO in the cultures. In this study, we aimed to evaluate the effectiveness of empiric CP on admission based on the risk factors for MDRO carriage in a hospital in a highly endemic country.

This study was carried out in a 300-bed private hospital. We collected the data from January 2016 to September 2018. Our hospital is a unique one with a very low rate of HAI with a dedicated infection control team (6). The infection control committee consists of more than thirty members and gathering each month to manage infection control measures.

In our hospital, we administer CP to patients with defined risk factors on admission. The nurses decided the CP indications on the day of hospital admission based on the indications described in the hospital isolation precaution document. Then the infection control nurses are called, and if the patients belong to at least one of the group defined below, implementation of CP starts on the first day of hospitalisation.

Group 3 consists of the patients transferred from another hospital

Group 5 consists of patients with other risk factors such as patients with neutropenia, sepsis, hemodialysis, history of surgery within the last three months, defined viral respiratory infection

The patients who belonged any of the risk groups defined above and hospitalised for at least one day were included in this study. The relevant cultures based on the patient’s clinical status were taken within the 48 hours of hospitalisation; however, routine surveillance cultures were not taken.

The healthcare-associated infections were defined according to the CDC guidelines used at the time of the study.

Pathogens requiring CP were specified based on “2007 CDC guideline for Isolation precautions”, which was updated in July 2019 (4). The infection or colonisation with MDR Gram-negative bacteria, MRSA, other methicillin-resistant Staphylococci, VRE, VISA, ESBL positive bacteria are described as the main pathogens CP should be implemented.

The CP aim to prevent the transmission of epidemiologically important pathogens such as MDR Gram-negative bacteria, VRE, MRSA, C. difficile. A gown and gloves should be worn for all interventions that require interaction with the patient or patient’s potentially contaminated environment.

The Student’s t-test was used for continuous variables, and the Chi-square test was used for the categorical variables. In multivariate analysis, for the predictors of detection of CP requiring pathogen, age, male gender, known colonisation with resistant bacteria, history of surgery within the last three months and cancer were included in the model. The logistic regression with backward selection was performed. STATA (USA, version 14) was used, and the statistical significance was defined as <0.05.

The Institutional Review Board of Koç University approved the study. 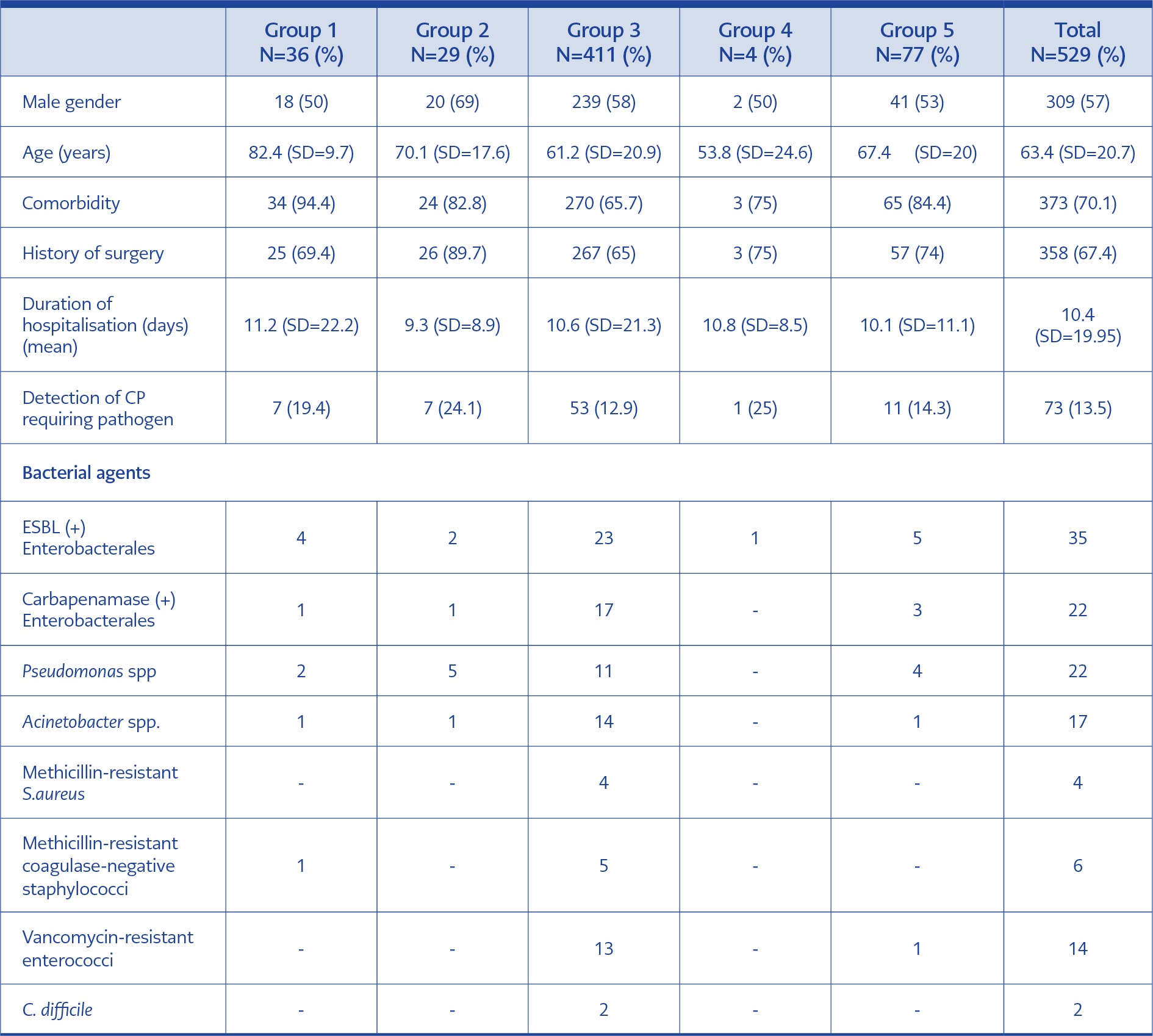 Antimicrobial resistance is increasing all over the world, with high mortality and morbidity (7,9). Strict adherence to infection control measures is critical for the prevention of MDR pathogen in high endemic countries. In this study, we evaluated the significance of empiric CP on admission to the hospital among patients with defined risk factors. We found that among 13.5% of 529 patients whose CP was administered, at least one MDR pathogen that required strict IC measures was isolated. The patients whom catheters and/or interventions (urinary catheter, central catheter, tracheostomy, gastrostomy) implemented before hospitalisation had the highest rate of MDR bacteria. Long term care patients also had a high rate of MDR pathogen that required implementation of CP. Being older than 60 years old was a risk factor for detecting CP requiring pathogen on admission.

The invasive interventions, including catheter insertion, urinary catheter implementation, tracheostomy before hospitalisation, were also accepted as high-risk factors for the acquisition of MDROs. Empiric CP was implemented to these patients on admission, and based on the initial cultures, this group had the highest risk for MDROs that require CP. Long-term care facilities are one of the high-risk centres for acquiring MDROs because of hosting a relatively older population with comorbidities, the patients with exposure to invasive procedures and the patients with recurrent hospitalisation (10,11). In our study, group 1 represents the long-term care patients and pathogens that required CP was grown in one-fifth of these patients. Transferring a patient from another hospital is defined as another risk factor for transmission of MDROs in a high endemic country. We implemented empiric CP to these group, and MDROs were grown among 13% of patients in initial cultures. These three groups should be handled meticulously while being admitted to the hospital because of including high patient rate with MDROs. Implementing empiric CP to these patients seems critical for the transmission of MDROs to other patients while pending initial culture results.

Our study has three years of data with high sample size. Each patient was followed up very closely by the same dedicated infection control team members. Besides these strengths, our study has some limitations. Group 4 that includes patients with known colonisation with MDR pathogen has a very low number of patients; however, this group was expected to include more patients. Information technology tasks might be more efficient not to miss these group.

In conclusion, isolation precautions from the first day of hospitalisation in an MDRO endemic country are important among high-risk patients such as patients with catheters and/or interventions, long term care patients and patients transferred from another medical centre. Patients older than 60 years old have a higher risk for MDRO carriage. Implementation of risk-based CP than the culture-based IC strategies might be an effective approach in an MDRO endemic region while pending culture results.