Objective: We aimed to detect the risk factors for invasive candida infections by evaluating the fungal strains cultivated from samples taken in a medical intensive care unit (ICU).

The incidence of non-albicans strains among candida growths has been increasing over the years.

Candida score was predictive of candidemia.

Fungal infections account for about 20% of all microbiological infections in critically ill patients (1). Candida species are the most common fungi in intensive care units (ICU) and mostly C. albicans (1-3). However, the rate of non-albicans Candida species such as C. tropicalis, C. krusei, C. parapsilosis, C. glabrata which are more resistant to antifungal therapy, has been increasing rapidly in recent studies (1, 2, 4, 5).

The rise of fungal infections in critically ill patients can be related to the presence of advanced age, prolonged length of ICU stay, glucocorticoid or immunosuppressive drug use, diabetes mellitus (DM), multiple invasive procedures, renal replacement therapy (RRT), and the wide use of invasive devices (central venous catheter [CVC]). In addition, many ICU patients are treated with prolonged antibiotic therapies for real or presumed bacterial infections, favouring the onset of fungal infections (2, 4-6).

Candida species are found in the normal flora of the mucous membranes of the skin, gastrointestinal tract (GIS), genitourinary system (GUS) and respiratory system in humans. Colonization is most common in the oesophagus and can become an invasive disease in 3-25% (1). In order to distinguish between colonization and infection, tissue biopsy is required under ideal conditions. However, since the procedure is invasive, it is suggested that the Candida score may also be used to estimate the presence of infection (2,4-6). This study aimed to evaluate the fungal strains cultivated from samples taken in a medical ICU and detect risk factors for invasive Candida infections.

Patients admitted to the third level ICU of a university hospital between January 1, 2016, and December 1, 2018, were included in the study if at least one of their cultures was positive for fungal infection during ICU stay.

Routine surveillance culture screening is not performed in our ICU. Microbiological sampling is performed only in the presence of clinical or laboratory signs of infection. These signs include fever, clinical deterioration, elevated acute phase reactants, hemodynamic instability, presence of purulent secretions, redness/pus around any catheter entry area, and development of symptoms suggesting sepsis.

In the case of a positive culture, the patient is evaluated by his doctor, an intensivist and the consulting infectious disease specialist to plan treatment in a consensus.

The research data was evaluated through the Statistical Package for Social Sciences (SPSS) 22.0 (IBM Corp., Armonk, NY, USA). Descriptive statistics were presented as mean ± standard deviation, median (interquartile range [IQR]), frequency distribution and percentage. IQR are calculated by subtracting the 25th percentile from the 75th percentile. Pearson’s chi-square test and Fisher’s exact test were used to evaluating categorical variables. Visual (histogram and probability plots) and analytical methods (Kolmogorov-Smirnov test and Shapiro-Wilk test) were used to examine if the variables were distributed normally. Mann-Whitney U Test was used among the two independent groups for the variables that were not normally distributed, and the Kruskal Wallis test was used among the four independent groups. When a significant difference was detected, the Mann-Whitney U test with Bonferroni correction was used in the post-hoc binary comparisons for the source of the difference. If variables conformed to the normal distribution, we used Student’s T-test between two independent groups and one-way ANOVA between four independent groups for statistical significance. When there was a significant difference, Tukey’s HSD test was used in post-hoc binary comparisons.

During the study period, a total of 384 fungal growths were reported for 179 patients. Samples were collected from urine, endotracheal aspirate, peripheral blood and blood drawn from a catheter, catheter tip, sputum, wound, abscess and cerebrospinal fluid. The median age was 72 years (IQR:20), and 46.4% were women. The mean APACHE II score was 24.7 ± 7.8, and the median SOFA score was 6 (IQR: 5). The median length of ICU stay was 18 (IQR: 24) days. 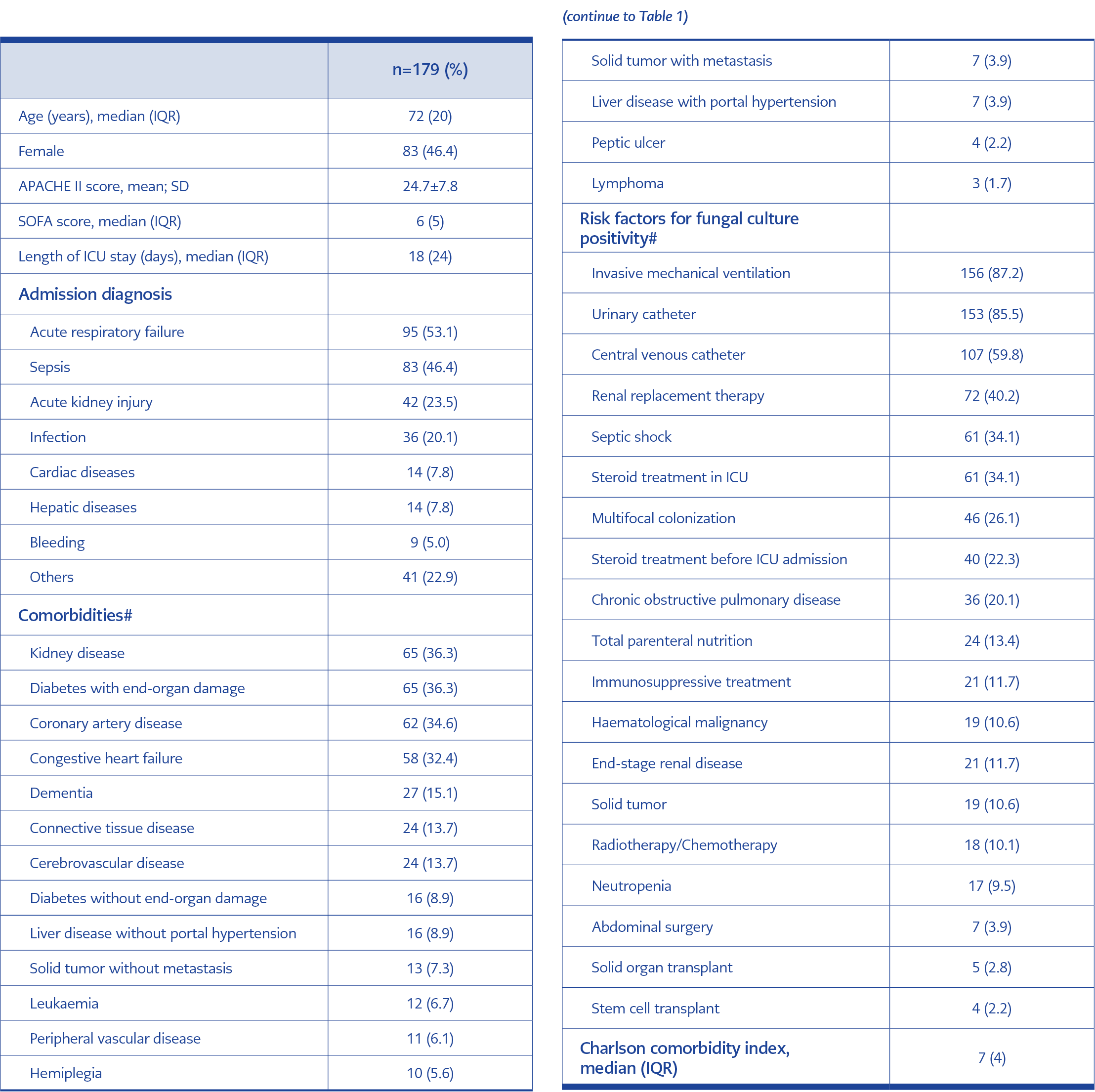 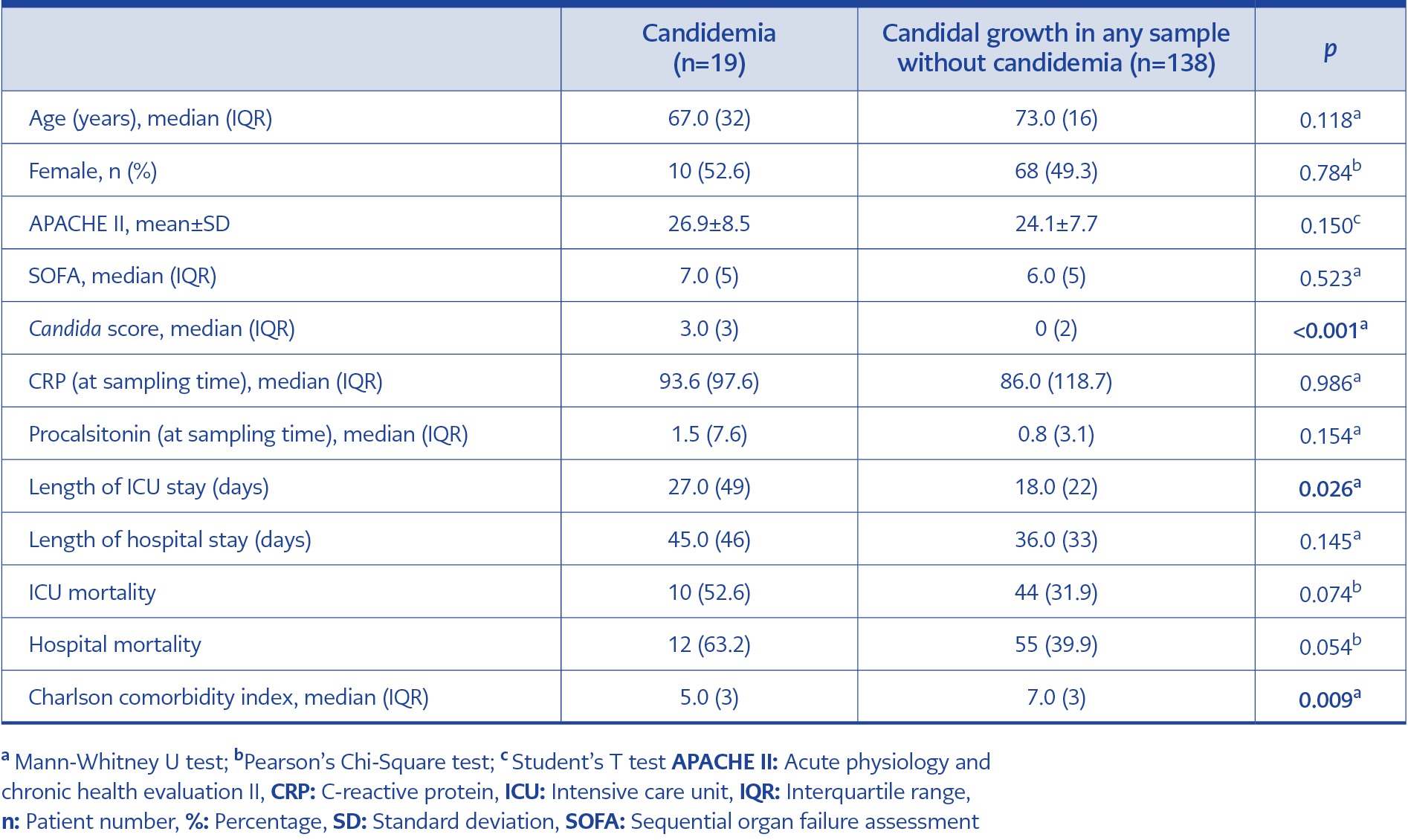 Table 4. Distribution of some descriptive and clinical features among patients with and without candidemia.

Table 5. Distribution of some descriptive and clinical features of patients with candidemia, candida urinary tract infection, candidal colonization and patients without any fungal growth.

In 384 samples examined, C. albicans (184-47.9%) were the most common strain revealed. It was followed by other Candida species (46.8%) and Aspergillus species and, in several cases, Trichosporon, Saccharomyces, Fusarium and Rhizopus (5.3%). The frequency of Candida spp., which were the most common agents, by years is presented in Table 2.

Amphotericin B resistance was detected in 7% of Candida species. Candidemia was detected in 19 (10.6%) of 179 patients. In these 19 patients, the most common causative agent was C. parapsilosis (57.9%). Echinocandin resistance could not be evaluated during the study period because the antimicrobial agent was not available in our hospital.

When patients with and without candidemia were compared Candida score, CCI and length of ICU stay were determined as possible risk factors for the development of candidemia (Table 4). We performed multivariate logistic regression analysis to evaluate the independent effects of probable predictors determined as a result of univariate analysis in predicting the development of candidemia. As a result of this analysis, we found that length of ICU stay did not increase the risk of candidemia, and patients with higher candidemia scores and lower CCI were more likely to develop candidemia (Candidemia score:  OR:1.93,  95% CI:1.27-2.94,  p:0.002; CCI: OR:0.77, 95% CI:0.62-0.95, p:0.016).

When patients, who were admitted to ICU during the same period, with (either colonization or infection) and without fungal growth were compared, a significant difference was found between the groups in terms of age, APACHE II score, length of ICU and hospital stay, ICU and hospital mortality (p <0.05) (Table 5).

Fungal infections have increased rapidly in the last few decades (7). Infections related to Candida species are seen more frequently in ICUs. These infections are associated with 47% mortality (8). Many risk factors have been identified for the development of candida infections, such as broad-spectrum antibiotic treatment, hemodialysis, pancreatitis, TPN and treatment with steroids or other immunosuppressive agents (9). Despite new antifungal agents and advanced care, candidemia is associated with increased medical cost, mortality and long-term hospitalization (10). A change in the pattern of infecting strains from C. albicans to non-albicans Candida species, such as C. glabrata, C. tropicalis, C. parapsilosis and C. krusei, is noted (11).

In the EPCAN observational study evaluating 956 positive fungal cultures, the most common strain was Candida spp. (94.1%) (12). In a thesis study evaluating candidemia in non-neutropenic ICU patients in our university, C. albicans was observed at a rate of 50.7% (13). In our study, C. albicans was the most common strain, followed by C. tropicalis and C. parapsilosis. The increasing frequency of C. glabrata over the years was also remarkable.

Patients with a high probability of invasive candidiasis, that is, patients with more comorbidities and who are clinically septic, are empirically administered antifungal treatment while waiting for culture results. For some patients, fungal growth was reported only from tracheal aspirate or urine samples, and antifungal treatment was discontinued in those patients who were not considered to have a fungal infection. Positivity of the tracheal aspirate sample was not considered a diagnostic feature alone for fungal infection for any of the patients. These patients were considered to have fungal colonization.

In a recent multi-center study conducted in our countries ICU’s, candidemia developed in 11.9% of colonized patients (14). In our study, the rate of development of candidemia after colonization was determined as 12%. Therefore, colonized patients in the ICU should be carefully monitored, considering the risks of possible invasive candidiasis in the future.
Recent epidemiological studies show an increase in candidemia because of C. parapsilosis (15,16).

In our study, C. parapsilosis was observed as the most common agent in candidemia. A positive culture was detected in the first 72 hours in 5 of these patients. The incidence of increasing C. parapsilosis infections belongs to the organism’s ability to grow in parenteral nutrition solutions and its tendency to form biofilms that lead to colonization of intravascular devices and prosthetic materials (17,18). In our study, except for one patient, all of the patients who developed candidemia by C. parapsilosis had a CVC, which is considered a risk factor for positive C. parapsilosis culture.

Seventy-two percent of patients who developed candidemia due to C. parapsilosis were in a septic shock when samples were obtained. It was thought that septic shock may have developed early during the infection since it was related to an intravascular device.

The European Society of Clinical Microbiology and Infectious Diseases (ESCMID) and the Infectious Diseases Society of American (IDSA) 2016 guidelines no longer recommend the use of fluconazole in first-line therapy for invasive candidiasis and recommends the use of echinocandins as primary care empirical therapy (4,21). In the present study, we observed that caspofungin was preferentially administered in septic patients with candidemia in accordance with the literature and current guidelines. However, the validity of this recommendation should be reviewed regarding local resistance patterns because strains’ resistance against fluconazole was lower than the literature indicated.

It is stated that de-escalation is a safe choice in ICU, whereas improper treatment at the time of diagnosis prolongs ICU stay and increases mortality (22). Yet, in our study only one patient’s systemic antifungal therapy was de-escalated to fluconazole.

Despite increasing rates of fungal infections in ICUs, diagnosis is still difficult due to the lack of specific symptoms, late positivity in cultures and the common occurrence of contemporaneous bacterial infections. Delayed treatment is directly related to increased mortality. Therefore, it is important to know the risk factors to identify high-risk patients and administer early antifungal treatment. The use of the Candida score for this purpose is relevant in critically ill medical patients. In the face of increasing rates of non-albicans Candida infections, knowing the local susceptibility patterns when planning preemptive treatment of candida infections is crucial.

Informed Consent: This is a retrospective study for which no formal consent is required.

Scientific Presentation: The present study was presented during 16th National Congress of the Turkish Society of Medical and Surgical Intensive Care as an oral presentation in Turkey on November 1-5, 2019. It has also been published in the congress abstract book: Yogun Bakım Derg 2019;10(S1):66.