Materials and Methods:
This study was designed as a cross-sectional survey. The sample size was calculated to be 364 based on 95% confidence interval and 5% margin of error. The data were collected through a questionnaire consisting of 17 questions, which was distributed through social media. The final study group included in the research consisted of 384 GOs.

Results:The mean age of the GOs that participated in the study was 39.7 years (SD = 10.2). 43.5% of the GOs reported that they recommended the influenza vaccine to pregnant women who had consulted with them, while 62.8% reported that at least 50% of the pregnant women they had recommended the vaccine rejected it. According to multivariate logistic regression analysis, three factors increased the rate of GOs’ not to recommend influenza vaccination: the GOs’ age, not receiving influenza vaccination themselves, and not knowing the social insurance reimbursement for the vaccine.

Conclusion: Vaccination of pregnant women is necessary because of the increased mortality risk of influenza during pregnancy. Even though GOs are not in charge of vaccinating their patients during their routine pregnancy follow-up, they can contribute to vaccination rates by recommending the vaccine. Physicians’ application of scientific knowledge and transferring it to their patients can contribute to increased adult immunization rates.

Influenza is a systemic infectious disease. Many groups, including patients with concomitant chronic heart and lung diseases, immunosuppressed individuals, people over 50 years old, and all health staff are considered at-risk groups for influenza (1). Pregnant women are particularly considered to be at a higher risk. Influenza infection during pregnancy is associated with increased morbidity and mortality and fetal growth retardation. Administering influenza vaccines during pregnancy protects the pregnant woman, the fetus, and the newborn (until the sixth month). The influenza vaccine in its inactive form can be administered safely throughout the pregnancy period, and it protects against three to four influenza viruses depending on the content of the vaccine. The World Health Organization, the Centers for Disease Control and Prevention and the health authorities of several countries recommend vaccination for all women who plan to get pregnant or who are pregnant during the influenza seasons. However, influenza vaccination rates are low all over the world among both in pregnant women and all other risk groups (1–3).

In Turkey, adult immunization services are recommended within the framework of the Extended Immunization Program (4). The influenza vaccination rates among health staff, people with chronic lung disease, and the diabetic population in Turkey are low, while pregnant women’s influenza vaccination rate is unknown. The influenza vaccination rates can, however, be estimated through the number of vaccines done in a season at the primary health-care centers. Pregnant women see gynecologists and obstetricians (GOs) at regular intervals, which provides an opportunity to recommend and administer vaccines during pregnancy. Recognizing how this opportunity is used in practice and identifying the reasons why physicians do not recommend the vaccine could help to design strategies to increase immunization rates (5–6). To the best of our knowledge, no study has investigated this topic in Turkey. In this study, we inquired into the rates of Turkish GOs’ recommendation of influenza vaccines to pregnant women and the factors that discourage the GOs from recommending the vaccine.

This study was a cross-sectional survey. The study group consisted of GOs, including both residents and specialists who were working in Turkey at the time the study was conducted. Based on the records of the Ministry of Health, the total number of active GO residents and consultants in Turkey as of December 2018 was 7,021. When the rate of influenza vaccine recommendation to pregnant women among the GOs (i.e., the dependent variable) was set at 50%, a confidence interval of 95%, and a margin of error of 5%, a minimum sample size of 364 was calculated using the Epi Info program. Thus, a total of 384 GOs were included in the study group. The stratified sampling method was used to choose a representative sample of the GOs by geographical area. To distribute the sample group by population and geographic region, survey responses that disrupted the stratification were excluded from the dataset by taking into account the date and time of the survey. 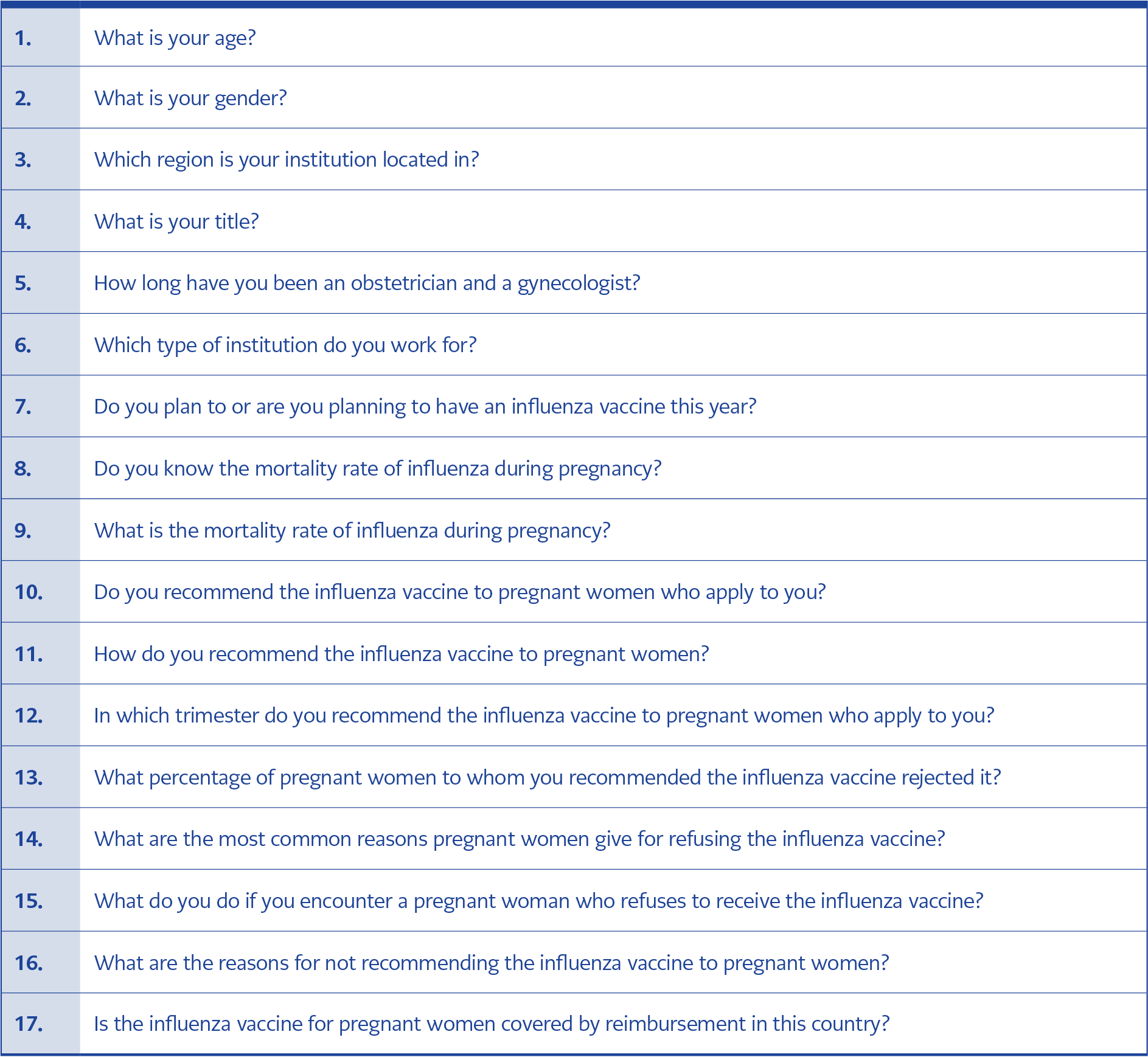 As it was not possible to reach all the GOs in Turkey, the sample population was not selected from the list. Instead, the data collection phase was carried out through a closed social media group with a membership of 4,300 GOs. The data were collected between March 2019 and May 2019 via an online questionnaire, which comprised 17 questions. The questionnaire was created using Google Forms. The questions were arranged according to the question content and the answer type; both multiple-choice questions and open-ended questions were asked (see Table 1). GOs who had teaching duties and scientific afiliations were considered as academicians.

The data were analyzed using IBM SPSS Statistics 21.0. The descriptive findings and percentage distributions were given with the mean, standard deviation (SD), and minimum and maximum values. Chi-square test and backward stepwise multivariate logistic regression analysis were used to analyze the relationship between not recommending the influenza vaccine and the independent variables. Statistical significance was set as p<0.05. 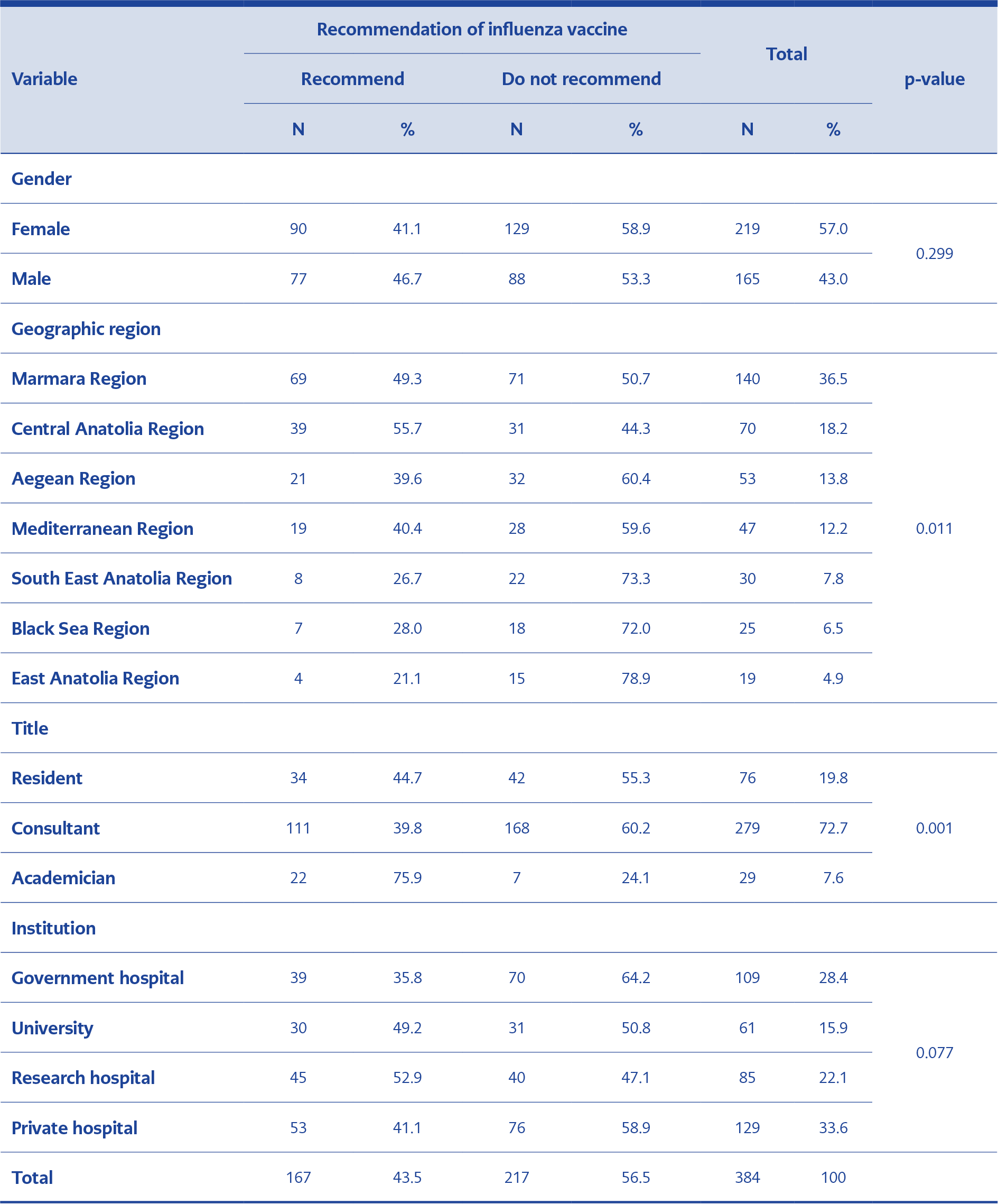 Table 1. Status of the respondents regarding the recommendation of influenza vaccine according to gender, geographical region, title, and institution

About 80.7% of the GOs in the study group reported that they had not received or did not intend to receive the influenza vaccine in 2019. Only about 41.7% of them stated that they knew the mortality rate of influenza during pregnancy (Table 2). The mean mortality rate of influenza during pregnancy according to the GOs was 14.6% (SD = 15.1; minimum = 0.1%; maximum = 90%). 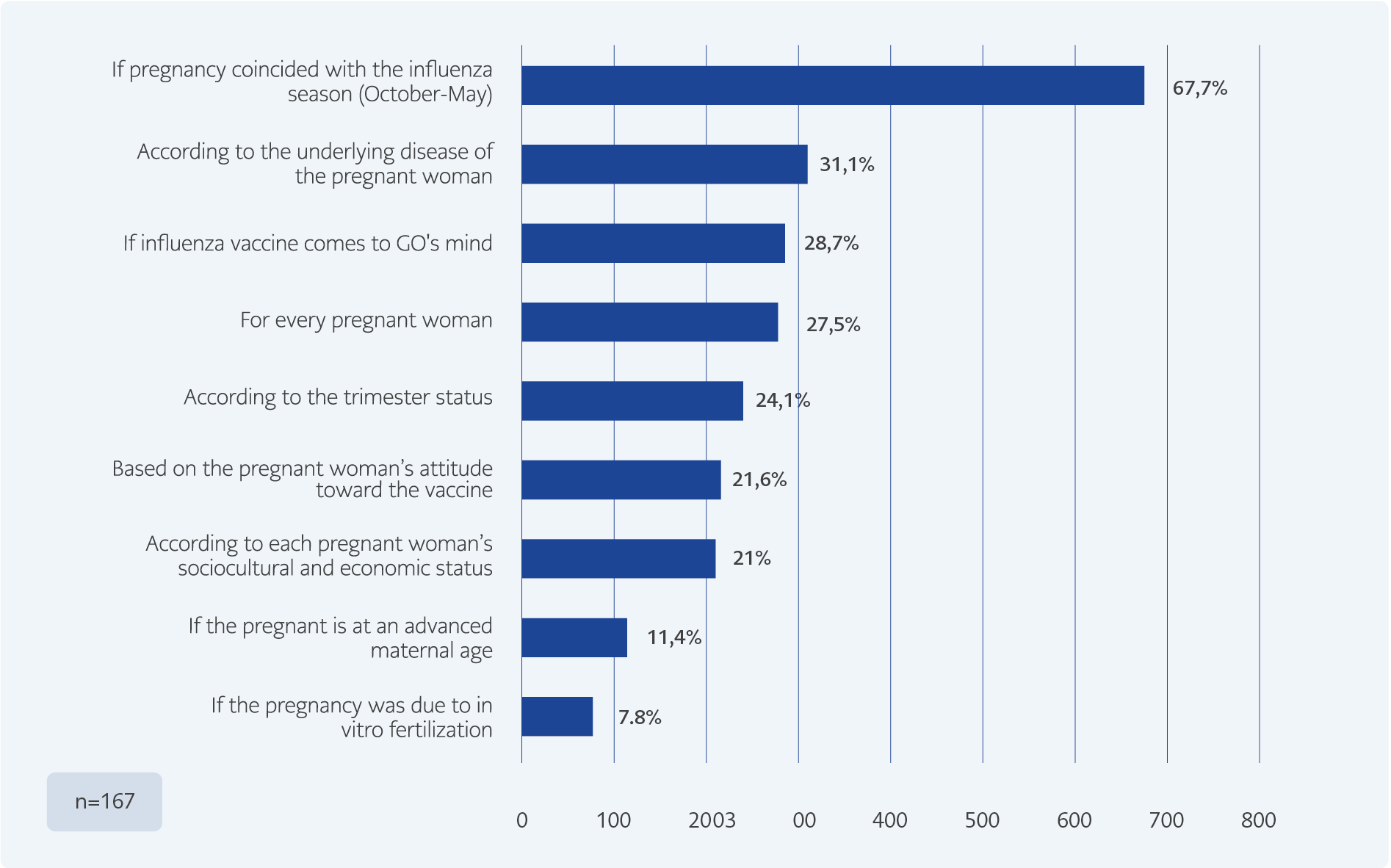 Figure 1. The situations when the gynecologists and obstetricians recommend the influenza vaccine 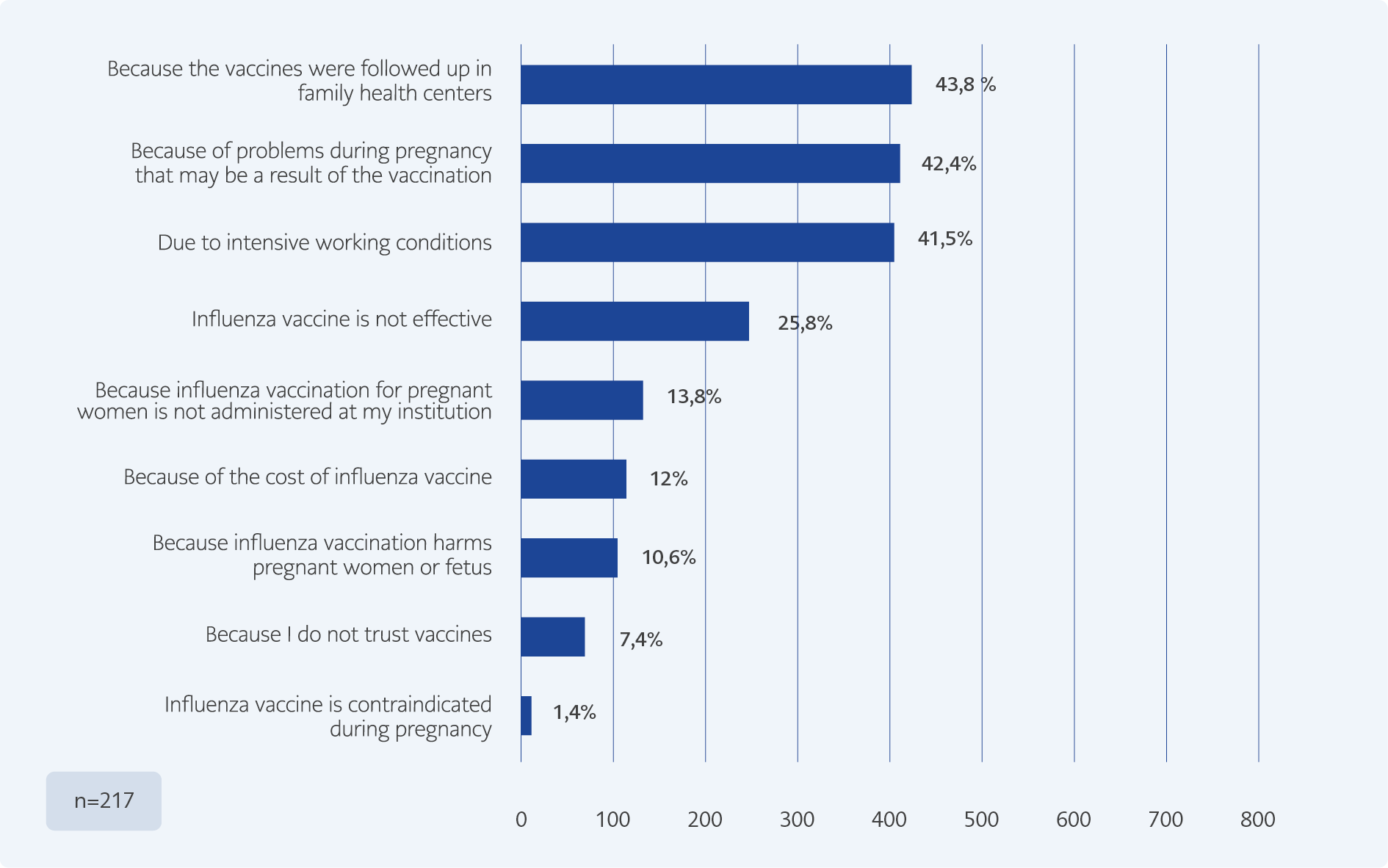 Figure 2. The reasons for not recommending influenza vaccination for pregnant women

Approximately 56.5% of the GOs stated that they do not recommend the influenza vaccine to pregnant women who consult with them. 43.8% of the GOs stated that since the vaccines are usually administered and followed up at the family health centers they do not think about vaccines (Figure 2). Among the GOs, only about 31.8% were aware that social insurance reimbursement covers the influenza vaccine for pregnant women in Turkey. 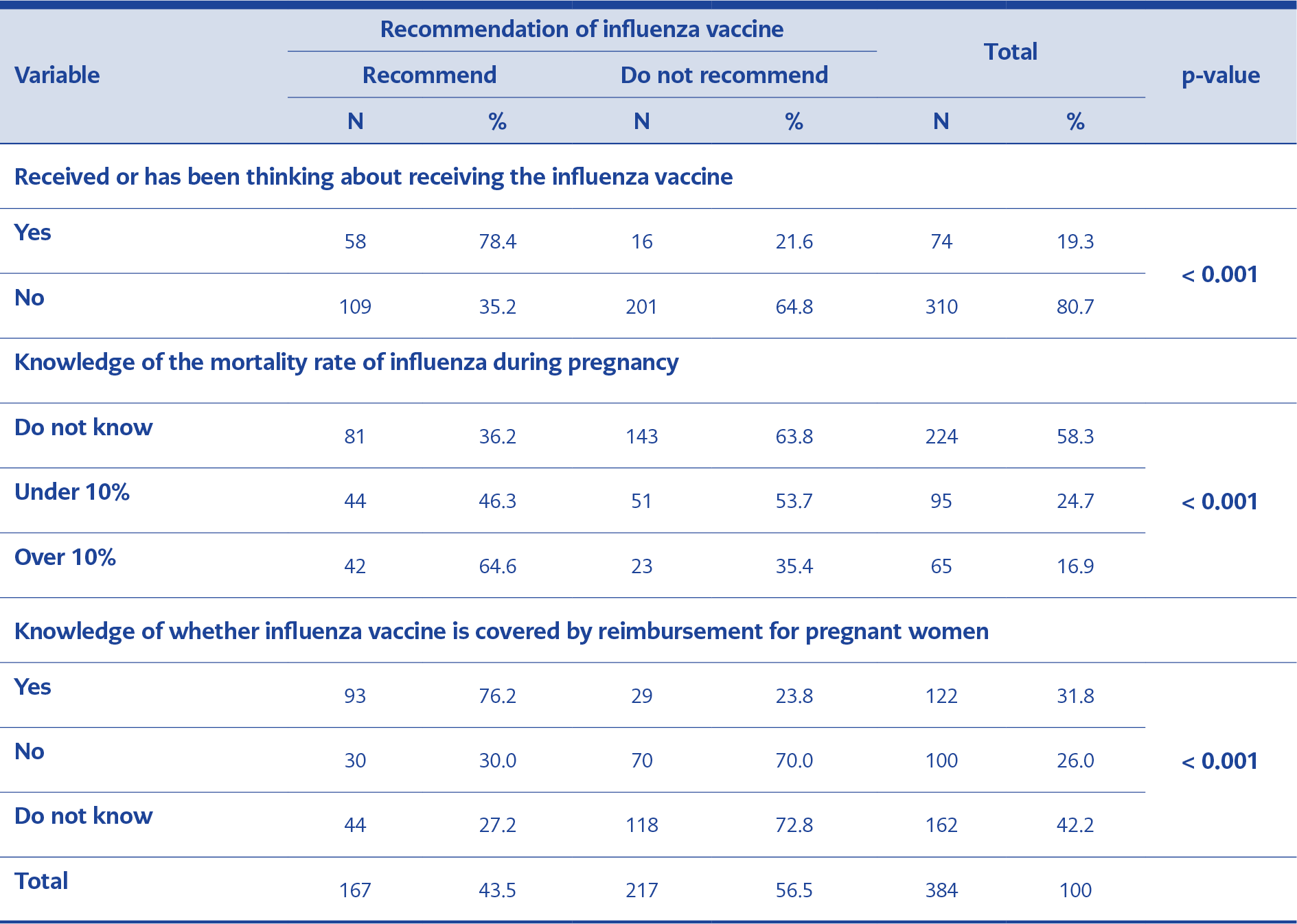 Awareness of the importance of adult immunization has increased in recent years and has shaped health policies and approaches. However, the role of preventive medicine physicians in recommending the vaccines has been hampered by intensive working conditions and the shifting demands of therapeutic practice, which has led to a lack of adult immunization services.

Although previous research has suggested that influenza vaccines are recommended to high-risk populations at a higher rate, the vaccination rates are still quite low (5–7). In all the studies evaluated, the rate of influenza vaccination in all at-risk groups was below 50% (8–10). The prevalence of influenza vaccine recommendation rates among the GOs was found to be 43.5% in this study, which makes the well-being of the fetus a serious concern because of the increased risk of mortality. Factors that made the GOs less likely to recommend the vaccine include their assessment of the risk of influenza during pregnancy and the comorbid diseases of the pregnant woman. The percentage of the GOs who recommended the vaccine in all cases as recommended by the Centers for Disease Control and Prevention was only 27.5%.

In our study, factors such as increased physician age, not knowing that the vaccine is covered by reimbursement, and not knowing the mortality rate of the disease were found to be associated with lower vaccine recommendation rates. These findings reveal that vaccination recommendation rates are lower when the level of knowledge and awareness about the disease is low. In almost all studies examining the problems of adult immunization, intensive working conditions of physicians and lack of easy access to vaccines have been identified as important obstacles to higher vaccination rates (12,13). In this study, we confirmed that some physicians did not recommend vaccination due to the intense nature of their work and because they did not know that the vaccine was covered for reimbursement, which contributed to the low vaccination rates.

The subject of immunization should be an important part of both medical education and speciality training. It is a dynamic subject that requires innovation, especially for the vaccination of special patient groups. The introduction of new vaccines and vaccination schemes requires that all physicians closely monitor this field and renew their knowledge at the postgraduate level (14). Influenza vaccination is very important during pregnancy, as it contributes to a healthy pregnancy process, healthy infant follow-up, and overall public health. Only by educating physicians will it be possible to achieve high adult influenza immunization rates.

Ethical Approval: Ethical approval for this study was obtained from the Ankara University Non-Clinical Research Ethics Committee on Humans. The ethics committee approval number was 21/03/2019-137.