The Knowledge, Attitudes and Beliefs of the Healthcare Workers about Influenza Infection and Vaccination at a Public Hospital in Turkey

Materials and Methods: At a 1,100-bed hospital in which 2766 HCWs were employed, a face-to-face survey was conducted by four researchers. The information about demographic features, the awareness level of the potential risk of influenza infection on HCWs, influenza vaccination history and future thoughts about vaccination were obtained.

Results: In total, 1318 (47.6%) HCWs participated in the study. 72.1% (n=950) of respondents were female, and the mean age was 36.5. A hundred (7.6%) HCWs had laboratory proved influenza infection history. Among the participants 14.9% (n=256) did not consider themselves at high risk in terms of influenza infection, 32.2% (n=425) of respondents claimed that they did not have enough knowledge concerning protective precautions against influenza infection, and 55.5% (n=731) of HCWs have never received influenza vaccine. Only 27 (2%) HCWs got vaccinated against influenza, annually. Leading reasons for non-vaccination were disbelief in personal need (40.1%) and disbelief in beneficial value (36.5%) of influenza vaccine. The 81.9% (n=1079) of HCWs decided not to receive influenza vaccine during the 2018-2019 influenza season.

Conclusion: In conclusion, the vaccination rate of HCWs was too low, and the risk of influenza infection was being underestimated. There were misconceptions related to the influenza vaccine. Urgent action is needed to be taken to improve this situation.

Seasonal influenza is an important cause of mortality, particularly in immunocompromised and elderly patients, children, pregnant and postpartum women. Iuliano et al. estimated that each year 291,243 to 645,832 deaths are attributed to seasonal influenza (1). Turkey is located in the northern hemisphere; therefore, the majority of the influenza cases occur between October and April.

Regarding knowledge, attitude and practice (KAP) of HCWs, WHO and CDC recommend taking droplet precautions in case of a patient who has probable or proven influenza infection and vaccination of HCWs against influenza as the core element of preventive and control measures (2,3). Vaccination of HCWs against influenza is necessary not only to protect HCWs and decrease sickness absenteeism but also to prevent nosocomial transmission from even asymptomatic personnel to their patients (4,5). Beyond these main purposes, HCWs are role models to influence public opinion and to direct their patients for vaccination.

Turkish Ministry of Health has been providing freely available influenza vaccine for HCWs since 2004 and promoting onsite vaccination. Generally, vaccines are available in October, and volunteer HCWs are being vaccinated by infection control committees and/or occupational health departments. Nevertheless, vaccination coverage among HCWs remained lower than 20% in Turkey and exceeded only 40% even during pandemic influenza in 2009 (6,7).

A few published studies are investigating the dynamics of Turkish HCWs’ unwillingness to receive influenza vaccine. In these studies, concerns about side effects and disbelief in beneficial value were the most common addressed reasons for non-vaccination (8-10). At our institution, only 8 (0.03%) of 2600 HCWs were vaccinated against influenza during the 2017-2018 season. Therefore, this KAP survey was designed to reveal the underlying causes of low vaccination rate and to plan the future action to take at an organizational level to motive HCWs to be vaccinated against influenza.

In our institution, there were 1100 patient beds and 2766 HCWs as of 1st September 2018. A face-to-face survey was conducted by four researchers between 1st September 2018 and 1st October 2018. The participants were asked for: i) demographic data including age, sex, occupation and duration of work at healthcare sector; ii) influenza infection history, perceived risk of influenza infection, evaluating the adequacy and the source of their knowledge towards taking protective precautions against influenza infection; iii) influenza vaccination history, the reasons of non-vaccination and future thoughts about influenza vaccination. The history of laboratory-confirmed influenza refers to the past flu of which the cause was determined to be an influenza virus with rapid tests and/or molecular techniques. Whenever possible, participants were allowed to select more than one choices.

The sample size was calculated to be 191 HCWs at minimum, via chi-square goodness of fit test (α=0.05, 95% CI ). The questionnaire was performed among as many participants as the researchers were able to reach to prevent possible selection bias and balance the number of vaccine defender/opponent HCWs. The HCWs were grouped in four categories, A (physicians), B (nurses, pharmacists, psychologists, biologists, dieticians and physiotherapists), C (technicians, security, laundry workers, cafeteria workers and other ancillary staff), D (administrators, officers and secretaries).

Data was gathered and analyzed via the Statistical Package for Social Sciences version 24 (IBM SPSS) software. For intergroup comparison of categorical data Pearson chi-square, Fisher’s exact test and chi-square for trend analyses were chosen. Mann Whitney U and Kruskal Wallis H tests were used to compare variables between different groups. P<0.05 value was considered statistically significant and indicated by an asterisk (*). 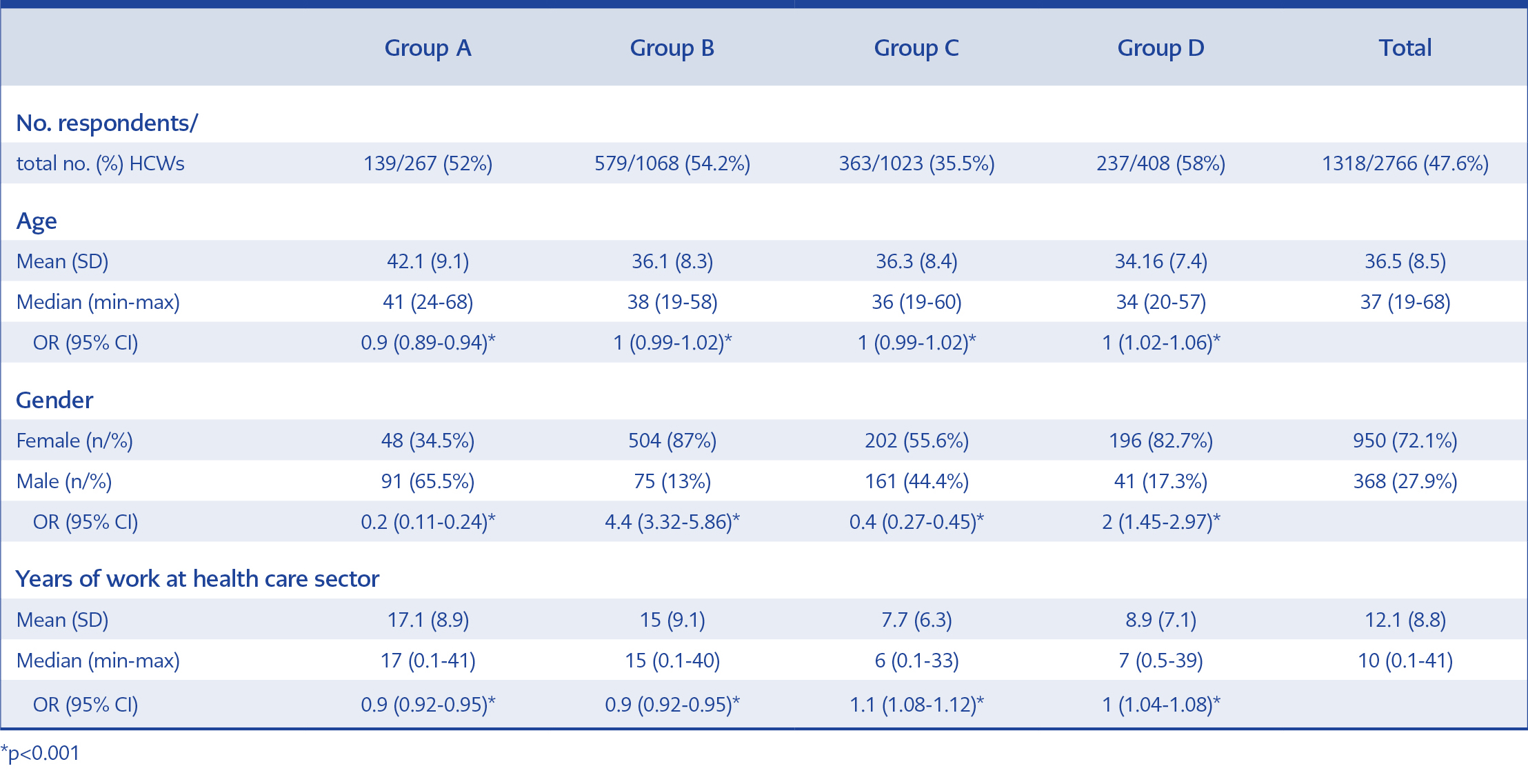 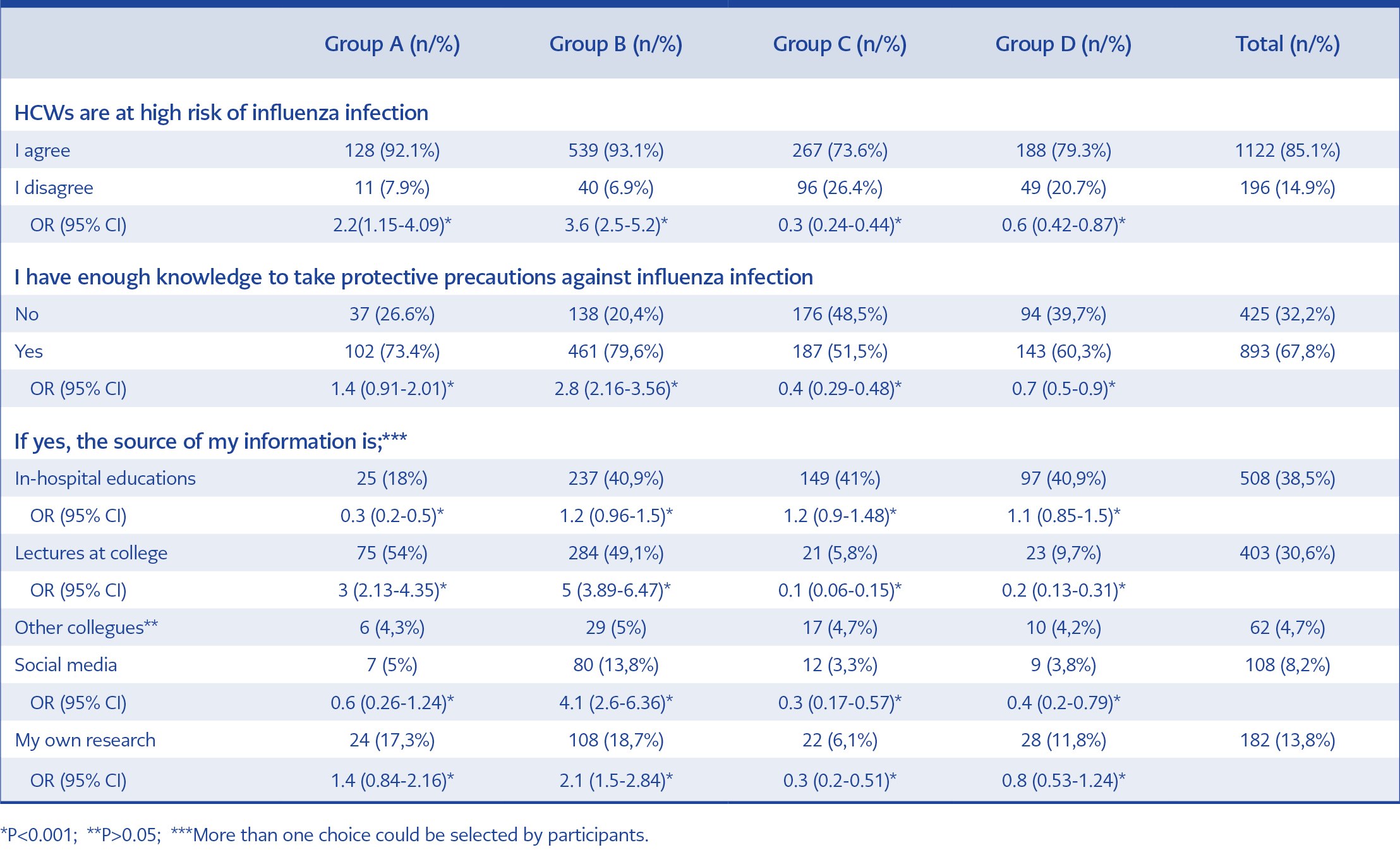 Table 2. Perceived risk and the origin of information to take protective precautions against influenza infection. 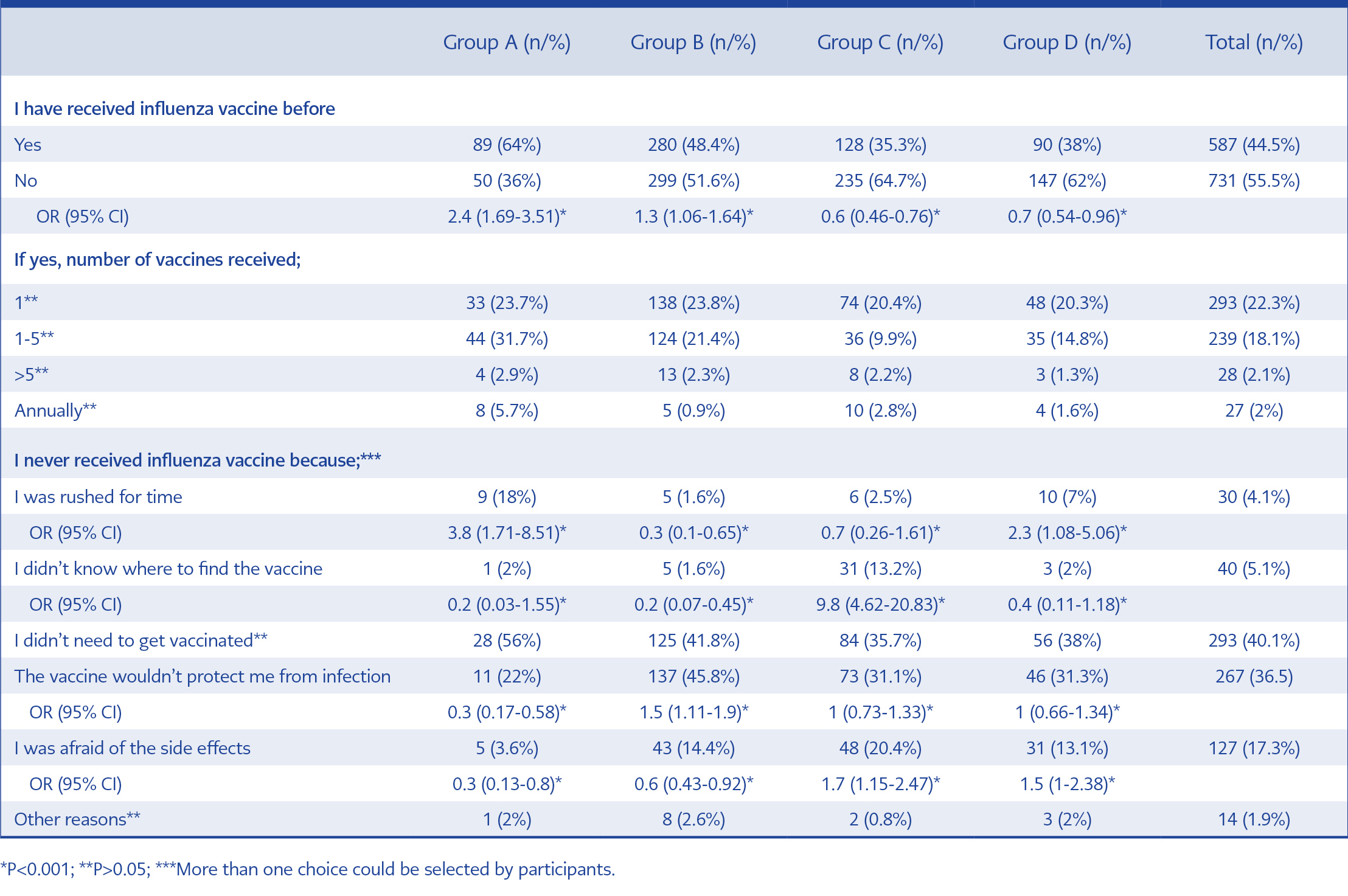 Seasonal influenza is a global health problem. HCWs are assumed to be the main reservoir to transmit influenza virus at healthcare settings (11). In addition to preventing HCWs from influenza infection, vaccinating HCWs against influenza was shown to decrease patients’ all-cause mortality and influenza-like infection (ILI) rates (12,13). Turkish Ministry of Health promotes HCWs’ influenza vaccination by providing freely available inactivated influenza vaccine and each facility decides and conducts its own campaign. In a recent review, the lowest and the highest vaccination rates of HCWs against influenza were 3.7% in Vietnam and 85.7% in Japan, respectively (14). In Turkey, this rate was reported between 11.3% to 18.4% (7,9). The infection control committee and the occupational health department declared that only 8 (0.3%) of 2600 HCWs at our hospital got vaccinated against influenza during the 2017-2018 influenza season. When analysed in-depth, it was concluded that two major reasons constituted this devastating problem: absence of a national adult and HCW immunization program and anti-vaccine campaigns on social media. By the end of January 2019, only 137 (5%) of 2766 HCWs at our facility received influenza vaccine. While previous studies reported the ratio of annually vaccinated HCWs between 66% to 81%, only 2% of participants in the present study have received influenza vaccine annually (11,15). Besides, despite about 12 years of work experience in the healthcare sector, 55.5% of respondents have never received a single shot of influenza vaccine. The rate of never vaccination among HCWs were reported from 51.3% to 69.8% in various studies in Turkey, whereas this rate was reported from 4.4 to 16.7% in other countries (6,15-18). In a study from Greece, the rate of never vaccinated HCWs was reported as 60% (19). To increase HCWs’ vaccination rates, campaigns which combine education, freely available vaccination, vaccination extended over a period of time, introductory activities and rewards were suggested to be effective (20-22). In addition, many reports advised mandatory vaccination of the HCWs against influenza (23,24). To our knowledge, no campaigns have been implemented at our facility to date. It is clear that urgent action is needed to be taken.

Our survey revealed that the sources of information regarding protective precautions were college lectures and hospital educations. The effect of personal research, social media and communication with peers were negligible.

Although the order varies in different reports, in concordance with our findings, the leading three reasons for not being vaccinated were disbelief in personal need, doubts related to efficacy and side effects (10,25,26). 234 (17.8%) of our participants declared their concerns but could not give evidence for the side effects. The best-known side effects of influenza vaccine are local reactions on injection site, headache, fever, nausea and muscle aches. Contrary to popular belief, the influenza vaccine does not cause flu and immunosuppression. Also, allergic reactions and Guillain-Barré Syndrome are infrequent (27). It was reported that, in the case of influenza vaccination, the respiratory tract is replaced by other pathogens, and the number of ILIs per year does not decrease (28). This could be the main reason for HCWs at our facility to question the effectiveness of the influenza vaccine. To fill the gap of misconceptions related to the effects of influenza infection over HCWs and efficacy and safety of the influenza vaccine, adapting the accurate information to educational interventions should be useful.

Surprisingly, HCWs who had influenza infection history were not intended to receive an influenza vaccine in the future. Christini et al. also found that ILI did not increase the intention to be vaccinated against influenza (11).

By conducting the survey face-to-face and efforts to reach every personnel, 47.6% of HCWs at our facility participated in our study. This high participation rate, which reduced the probability of selection bias, was the major strength of our study. The awareness of the HCWs who were vaccinated could be higher to participate in the survey. We did not ask for any documentation about vaccination; we relied on the recall of the HCWs.

In conclusion, the vaccination rate of HCWs at our facility was too low, the risk of influenza infection was being underestimated and there were misconceptions related to the influenza vaccine. The results revealed that, apart from the previous studies, there is a huge diversity between developing and developed countries in terms of HCWs’ knowledge and attitude towards influenza vaccination and taking protective precautions against influenza infection. Since in-house educational interventions were found to be the main correctible factor in our study, to increase vaccination rates, improving the quality and the number of hospital educations and conducting dedicated and coordinated campaigns should be of top priority.

Ethics Committee Approval: The Ethical Committee of Balıkesir University, Turkey, approved the study with the decision number of 2018/179.

Informed Consent: Personal willing to respond to the survey was accepted as informed consent.

Acknowledgements: We are thankful to the respondents and the hospital administrators for their involvement and support for the organization of the study.

Note: This study had been presented as a poster presentation in 29th European Congress of Clinical Microbiology and Infectious Diseases (ECCMID) in Amsterdam, Netherlands, 13-16 April 2019.