Introduction: Human Papilloma Virus (HPV) vaccine provides a primary prevention opportunity to decrease the morbidity and mortality of cervical cancer. Turkey has not yet included it in the national immunization program, but it is commercially available. We aimed to explore the predictors of HPV vaccine uptake among female students in a university in Turkey.

Methods: This is a cross-sectional survey conducted with 1,115 female students via a questionnaire assessing the sociodemographic characteristics, vaccination uptake, knowledge and attitudes towards HPV and related conditions.

Cervical cancer is the fourth leading cause of all cancers among women globally, and 90% of all deaths occur in low- and middle-income countries. Sexual intercourse is the main route of transmission for HPV infection. The course of HPV infection differs according to the HPV type, immune status of the women, coinfections with other sexually transmitted infections (STIs), number of parity and smoking habit. There is a risk of developing a chronic infection, which then might lead to cervical cancer (1).

The vaccination for HPV virus is the primary prevention measure for HPV related cervical cancers. They provide further benefits for HPV infected women by reducing the risk of relapse after clinical treatment of the disease (2). There are bivalent, quadrivalent, and nine-valent HPV vaccines, all including HPV types 16 and 18 that cause most cervical cancers (3). National level coverage of vaccines globally is under 80%, although they are all proved to be highly protective against cervical cancers (4).

The HPV vaccine is not included in the national vaccination program in Turkey yet; however, the HPV vaccines are commercially available in bivalent and quadrivalent forms. This study aimed to investigate the awareness of and attitude towards HPV vaccination and describe the reasons for not getting vaccinated among a study population of female university students.

This is a cross-sectional study conducted in 2015 among female students in a private university in Istanbul, Turkey. Initially, female interviewers (also co-authors GY, BEU, PY, BG, ŞEO, BE) administered the survey face-to-face for two months. After two months, we stopped the interviews and sent an email with an online survey link developed in Qualtrics™ to all female students in the university that was open for participation for an additional one month. Data collection was completed in three months. In order to prevent duplications, we had inserted a reminder of whether the participant had completed the questionnaire via a face-to-face interview before. When the participant gave a positive response, the online questionnaire automatically skipped the survey and finished the session.

The survey consisted of 25 questions on socio-demographics, sexual activity, safe sex practices, history of STIs and vaccine awareness and attitude. Vaccine awareness was assessed via 10 true or false questions, and attitude was assessed based on the participant’s vaccination status. Positive attitude was accepted if the participant initiated or completed the HPV vaccination based on self-report. Data collection started after obtaining ethical approval for the study from the Institutional Review Board of the same university. We obtained informed consent from each participant signing the form either by the initials of their name and surname or by using a pseudonym. To ensure the confidentiality and security of sensitive data, no personal identification information were collected in the questionnaire.

Statistical analysis was performed by using SPSS (V26.0). Continuous variables were summarized with their mean and standard deviation and categorical variables with percentages. We performed a Chi-Square test for univariate analysis, and we designed a logistic regression model with the variables showing significant association for multi-variate analysis. The variables that were significant in univariate analysis were included to the multi-variate model. Hosmer & Lemeshow test was used to assess the goodness-of-fit of the model. Statistical significance was accepted as p<0.05. 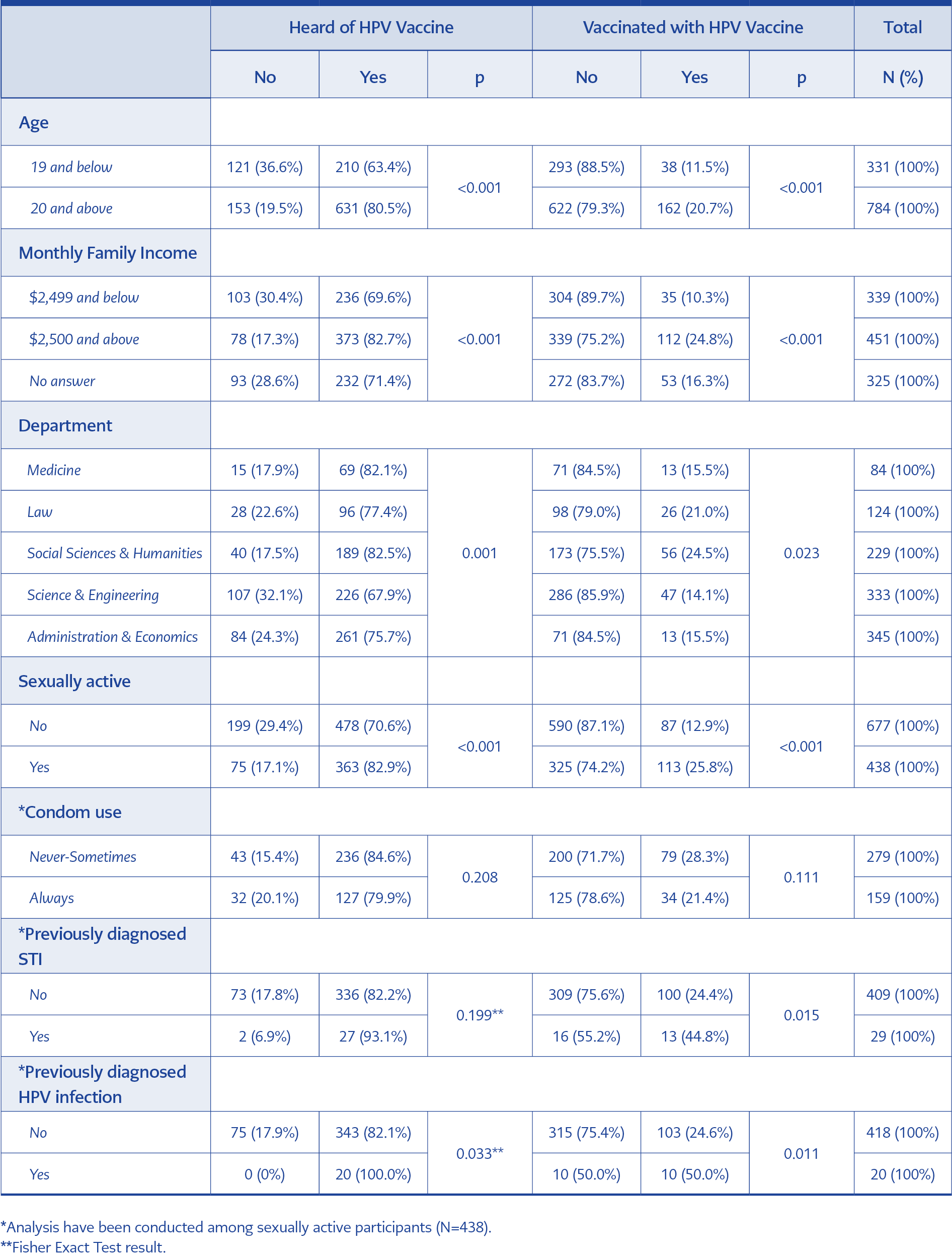 Table 1. HPV vaccine awareness and vaccination status (receiving at least one dose of HPV vaccine) according to sociodemographic characteristics and reproductive health status.

In total, 75.2% (n=838) reported hearing HPV vaccine and 17.9% (n=200) received at least one dose of HPV vaccine. Table 1 summarizes the HPV awareness and vaccination status according to the participants’ sociodemographic characteristics and reproductive health status. 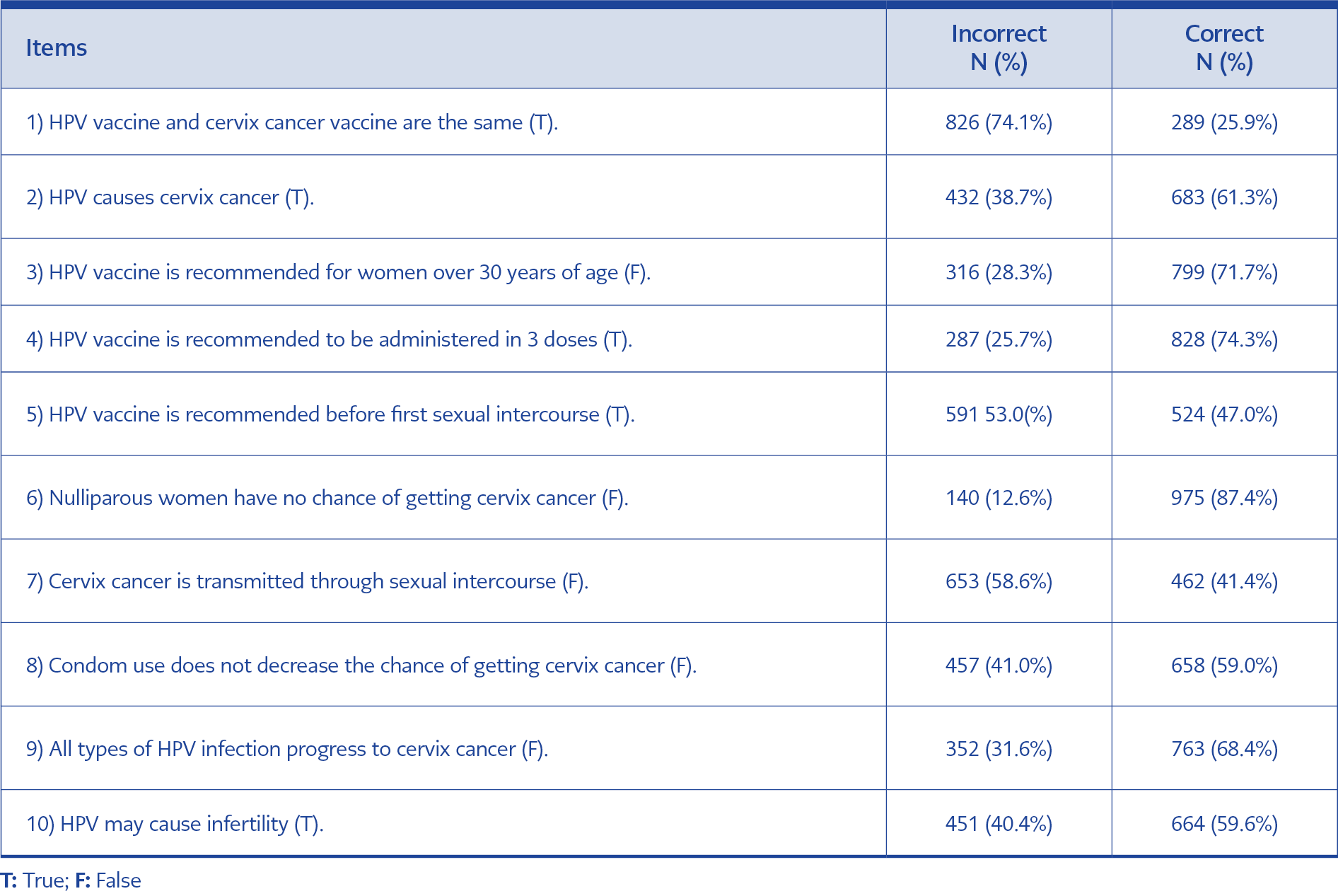 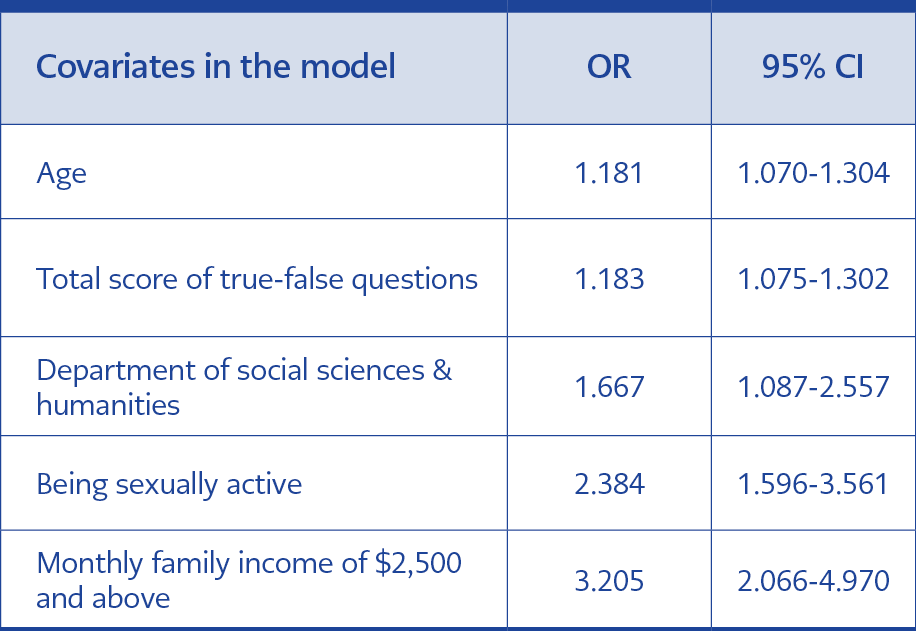 Table 3. Logistic regression model for getting vaccinated with HPV vaccine 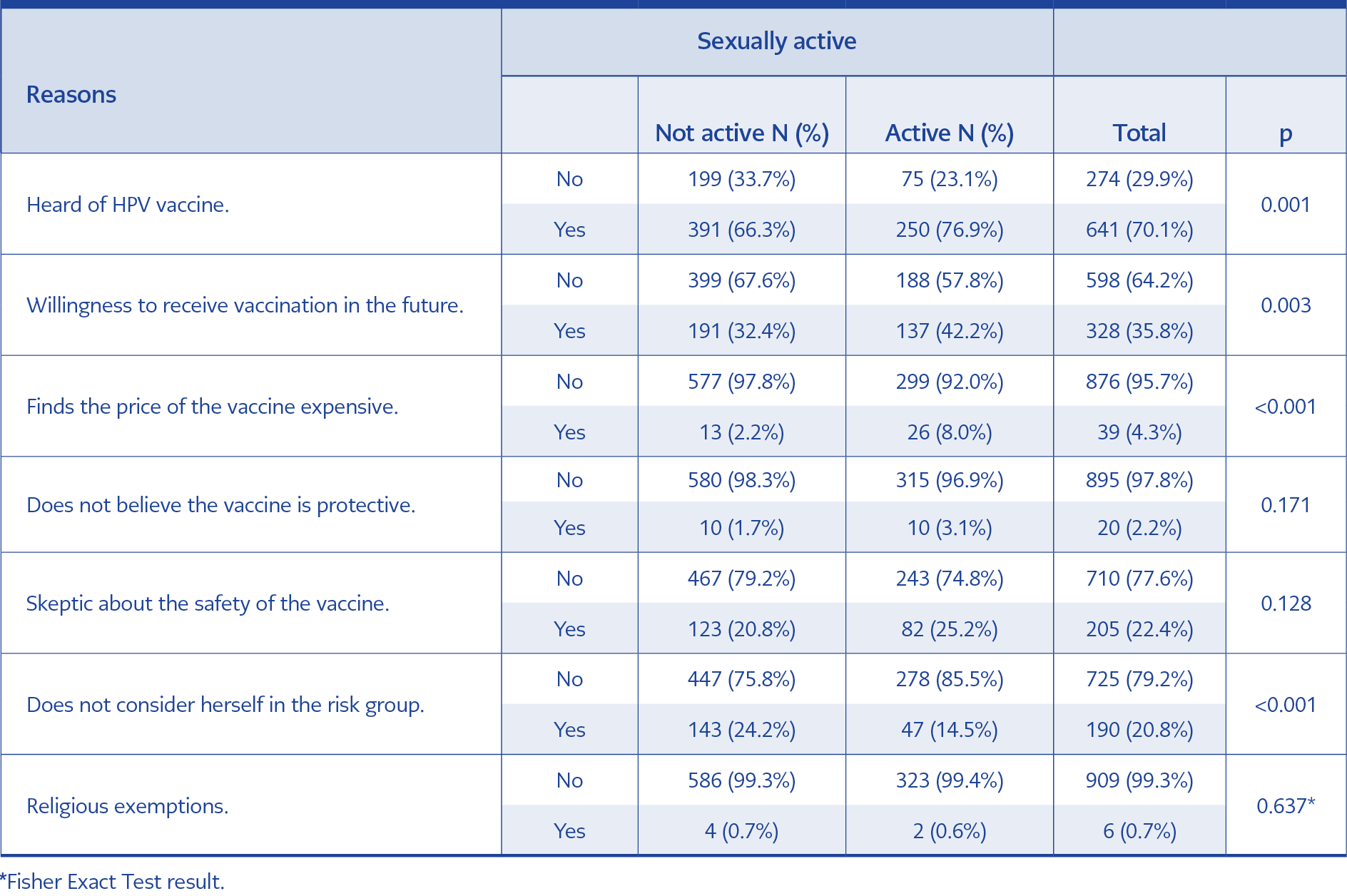 Table 4. Reasons for not getting vaccinated with HPV vaccine (N=915 after the participants who received vaccination has been excluded)

The association between vaccination status (receiving at least one dose of HPV vaccine) and the covariates that have a significant association in univariate analysis (age, knowledge test score, department, sexual activity, and monthly family income) was further analyzed in a logistic regression model (Table 3). The Hosmer & Lemeshow test indicated a good fit for our model (p=0.221)

The HPV vaccine has been approved to be administered to prevent cervix cancer in women in 2006 in the United States of America (USA) and it was available in Turkey soon after its introduction in the global market. Until the introduction of HPV vaccines globally, the most common prevention strategy for cervical cancers was screening programs for early diagnosis and early treatment. Since 2004 the Turkish Ministry of Health (MoH) has been implementing a PAP Smear screening program for women over 30 years of age, however, the coverage rate of the program was below 2%. In 2014 the MoH switched to an HPV DNA screening program that has increased the coverage 5-6 times more compared to the cytology-based program and the results of the HPV DNA screening showed that the most common serotypes were 16, 51, 31, 52 and 18 (5). Nevertheless, Turkish MoH has not introduced HPV vaccination into routine vaccination program as a preventive intervention. One reason is that the incidence rate of cervix cancer remains low at 5.7 per 100,000 (6) compared to 11.2 per 100,000 in the European Region (7).

Increasing age was significantly associated with an increased likelihood of vaccination uptake in our study. In a systematic review by Kessels et al. (2012), the age of initiation to HPV vaccine was more common in early ages and the level of initiation declined after 17 years of age (15). Similarly, Altobelli et al. (2018) has reported that in high-income countries, especially where HPV vaccination is included in the national immunization programs, HPV vaccination uptake is higher among females before 18 years of age (16). In South Africa, a low- and middle-income country, willingness to get vaccinated was higher among younger age groups as well (17). A US-based representative study among 18-24-year-old youth by Rahman et al. (2015) indicated that vaccination uptake was higher among younger women (18). However, in another study from the US with a representative sample of college students aged 18-26 years, Thompson et al. (2016) reported that there had been an increase in vaccination uptake with age (10). Also, a recent multicenter study from China reported an increasing trend of vaccination uptake by age among female college students, with a sharp increase after 23 years of age (19).
Studies focusing on universities from geographically diverse locations such as the USA (20), Lebanon (21) and China (22) consistently showed significantly higher knowledge scores among vaccinated students. The systematic review by Kessels et al. (2012) reported that a high level of knowledge was associated with higher uptake of the HPV vaccine (15). We found that increasing knowledge of HPV vaccine and HPV associated diseases have a significant association with vaccination uptake (OR: 1.18, 95% CI 1.075-1.308) and sexual activity (OR: 2.38, 95% CI 1.596-3.561). There have been similar findings from cross-sectional studies showing a significant association between vaccination uptake and sexual activity (9, 11, 13, 23) as well as no association (24). According to a study by Villanueva et al. (2019), among nursing school students, there was a significant association between sexual activity and increased odds for the level of knowledge, but no significant association with a positive attitude towards HPV vaccination (25). In our study, the total score in the knowledge test was significantly higher in both the sexually active group and the age group 20 and above; therefore, we propose that increasing age along with high scores in knowledge test might have created a higher risk perception that would increase their likelihood to receive the HPV vaccination.

Agostie and Goldie (2007) argue that the most critical barrier to access to the HPV vaccine is the cost (26). We found that income is the strongest predictor of HPV vaccination uptake with an OR of 3.20 (95% CI 2.066-4,970). Conroy et al. (2009) indicated that the low-income level was associated with lack of insurance, which then became a barrier to vaccination (27). Similarly, Dempsey et al. (2010) and Williams et al. (2013) found that level of vaccination uptake was associated with insurance coverage providing free access to HPV vaccines (8, 28). As mentioned earlier HPV vaccines are not included in the national immunization program, but HPV vaccines are available only in bivalent and quadrivalent forms in pharmacies for a price of approximately $90 per dose. Unless the vaccine becomes more affordable or is included in the immunization program, the price of the vaccine seems to cause an inequitable access.

Williams et al. (2013) reported that not needing the vaccine (first) and safety concerns (second) as the leading reasons for not receiving the vaccine (8). In our study, the first reason reported was willingness to vaccinate in the future followed by safety concerns and not considering herself in the risk group. Widjaja et al. reported price as the number one reason for rejecting the vaccination, followed by safety concerns (29). Kang and Moneyham showed that Korean students also had safety concerns and had a low level of perception for need (30). Another study by Bednarczyk et al. (2011) reported that besides safety concerns and the cost, the lack of doctor recommendation and low perception of the need due to not having sex were also critical (9). In Turkey, it can be said that it is common to recommend HPV vaccines among gynecologists (31). In our study, among the group who had not received the HPV vaccination, 35.8% reported their willingness to get the vaccination in the future. This ratio was significantly higher among the unvaccinated sexually active students. Again, the same group had a significantly higher awareness of the vaccine than unvaccinated students without reporting sexual activity. Although income was the strongest predictor of being vaccinated in the whole group, the price of the vaccine was found to be expensive by only 3.4% among the unvaccinated with a significantly higher ratio among the sexually active group. In addition, in the whole unvaccinated sample, the ratio of sexually active women was significantly higher.

This study is subject to several limitations. Firstly, this is a single-center study that was conducted in a non-profit private foundation university, which may not represent the university student population of the country in terms of vaccination rate. However, the vaccination rate was already low, and we expect much lower in the other universities and in the community. Secondly, we did not select the subject with a randomized method, but we tried to reach out to the students as much as possible and as a result we achieved a high response rate. Despite its limitations, our study has a high response rate with more than 1,100 participants, allowing us to draw stable estimates from the data. Also, to our knowledge, it is the first study to analyze vaccination uptake and related factors to show the disparities in access to HPV vaccine among female university students in Turkey.

Being sexually active and a high-income level emerged as the leading factors for the increased uptake of HPV vaccination in our study. Increased age and knowledge, together with beginning of sexual activity, seem to increase the perceived risk among female university students. Considering the low coverage level of HPV screening program in Turkey, HPV vaccination provides an opportunity to prevent HPV-related diseases, including cervical cancer. However, in a context where the vaccine is not included in the national immunization program, the vaccine’s cost may pose a strong barrier to ensuring equitable access to HPV vaccines. Policies and interventions to raise awareness might increase the demand for HPV vaccines. Besides, reducing the cost of the vaccines via different cost reduction mechanisms would increase the access.

Ethical Approval: Koc University Institutional Review Board approved the study with the approval number of 2014.135.IRB2.037.

Acknowledgements: The authors would like to thank Prof. Sibel Sakarya for critically reading and providing suggestions that helped clarify the manuscript.