Objective: In the determination and monitoring of neurocognitive disorders in human immunodeficiency virus (HIV)-positive individuals, there is a need for significantly more practical methods which provide results in a shorter time than the tests that require challenging and specialized expertise. This study aimed to evaluate cognitive functions and the factors affecting them in naïve HIV-positive patients using by Montreal Cognitive Assessment (MoCA) test before and after the initiation of combination antiretroviral therapy.

Materials and Methods: HIV-positive, treatment-naïve patients monitored between January-June 2017 were included in the study. The MoCA test was performed at the beginning and the sixth month of the treatment.

Conclusion: MoCA test is one of the most practical tests that can be applied in a short time period, and it was found useful in evaluating the changes in the cognitive functions of HIV-positive patients during antiretroviral treatment.

The presence of cognitive disorders in the human immunodeficiency virus (HIV) infected individuals has been known for a long time. A complete neuropsychological evaluation method is a gold standard for diagnosing HIV-related cognitive impairment (HAND). However, such tests require specially trained personnel and specialized centers, and testing takes a long time (1). Montreal Cognitive Assessment (MoCA) is a test originally developed to screen for cognitive impairment in the geriatric population at risk of early dementia. MoCA tests a wide range of cognitive domains, including memory, attention, and frontal executive functions, which are often affected in HIV-infected patients. Accordingly, it is sensitive to detecting mild cognitive impairments. Also, it can be applied both for baseline and follow-up assessments (2, 3).

The use of antiretroviral therapy (ART) has resulted in a significant decrease in HAND incidences (4, 5). A combination of antiretrovirals, which have better penetration through the blood-brain barrier, might be more effective in the treatment of HIV patients (6).

The study was conducted prospectively between January – June  2017 in Şişli Hamidiye Etfal Training and Research Hospital. Fifty-two HIV-positive patients were included in the study. Inclusion criteria were being between the ages of 20-35, being diagnosed with HIV recently, and planning to start treatment. Exclusion criteria were having neurological or psychiatric comorbid disease, systemic infection, metabolic disorder, anemia, hypo-hyperthyroidism, positive syphilis serology, history of substance or alcohol abuse, head trauma, or central nervous system infection. Beck Depression Inventory (BDI) was used to exclude patients with depression. Patients with more than nine points were excluded because of possible depressive states. The study was reviewed and approved by the Ethics Committee of Şişli Hamidiye Etfal Training and Research Hospital in Istanbul, Turkey.

The patients with eligible criteria were evaluated just before the initiation of the treatment. Montreal Cognitive Assessment Scale (MoCA) was used to evaluate cognitive functions. The same physician performed it, and cognitive impairment was evaluated by using the suggested cut-off score of ≤ 21 for our country (7). The patient’s age, gender, education level, smoking habit, alcohol and substance use, cluster differentiation 4 (CD4) + T lymphocyte count, HIV RNA level, and toxoplasma serology were recorded, and they were classified according to these parameters. In order to determine the effect of education on the MoCA test, patients were divided into two groups, higher education graduates and non-higher education graduates. Also, they were divided into groups by levels of CD4 + T lymphocyte (over 500 cells/uL or below) and HIV RNA (over 104 copies/ml and below) to show their effects on MoCA scores. Finally, MoCA scores of Toxoplasma IgG (+) and IgG (-) groups were compared to assess the effects of previous toxoplasma infection on cognitive functions.

Average, standard deviation, median, lowest, highest, frequency, and ratio values ​​were used in the data’s descriptive statistics. The distribution of variables was measured by the Kolmogorov-Smirnov test. Mann-Whitney U test was used in the analysis of independent quantitative data. Wilcoxon test was used to analyze dependent quantitative data. Spearman’s correlation analysis was used in the correlation analysis. P-values were corrected for multiplicity.

A total of 52 patients were included in the study. Two female patients were excluded from the study because of the possibility of affecting the sample distribution. Patients with elevated BDI, positivity in syphilis serology, and diagnosed with bipolar disorder were also excluded. The study continued with a total of 40 patients.

The patients whose treatment was started and who had treatment compliance were re-evaluated at the sixth month of the treatment. Depressive symptoms were evaluated again with the BDI, and MoCA test was performed. Follow-up CD4 + T lymphocyte and HIV RNA levels were recorded. MoCA test results of the patients were compared with their pre-treatment values. In addition, MoCA scores of viral suppressed and non-suppressed groups were compared, and the changes in MoCA scores in these two groups were examined.

The mean baseline MoCA score of the patients was 22.6±3.9. It was below the normal value in 11 (27.5%) patients, and the most affected cognitive functions were delayed recall and attention, respectively.

Ten patients included in the study had a toxoplasma infection history. When the groups with negative and positive toxoplasma serology were compared, no significant difference was found regarding cognitive functions. 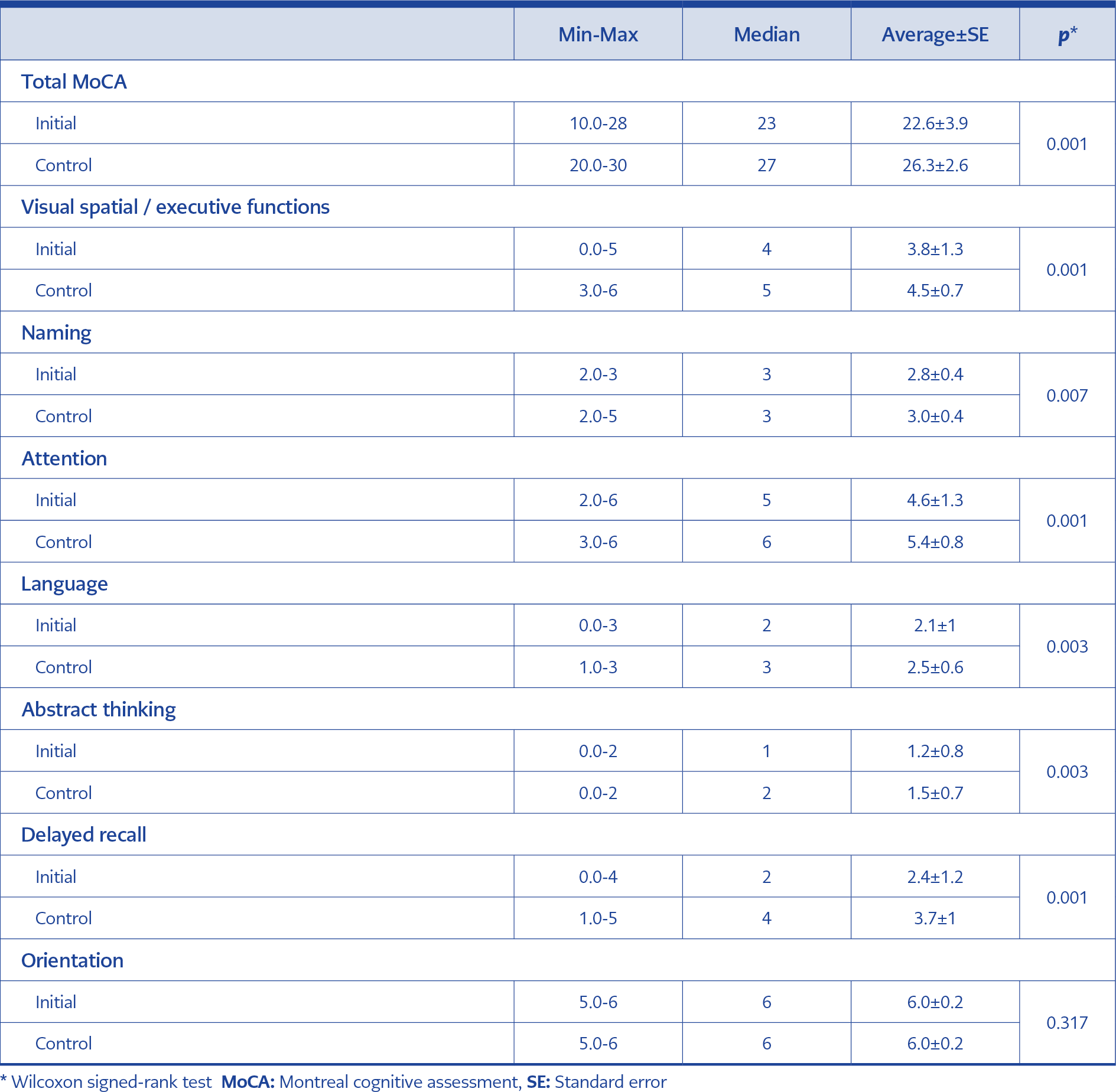 Table 3. The change in the MoCA scores of the patients in six months interval.

Follow-up MoCA score increased significantly compared to the baseline MoCA score (p<0.05).  MoCA score was found below the normal value in 3 (7.5%) patients in the sixth month of the treatment. When the changes in MoCA subgroups were examined, it was observed that there was an improvement in all cognitive functions except the orientation function (Table 3, Figure 1).

When the two groups that CD4 + T lymphocyte counts below and above 500 cells/uL were compared, no significant difference was found between the follow-up MoCA scores.

HIV, which is known to have effects on many systems of the body, especially the immune system, also affects the central nervous system from the early stages of the disease. Cognitive impairment caused by the virus may vary clinically from asymptomatic to severe cases such as dementia.

Many studies have supported the positive effect of ART on cognitive functions. It has been reported that ART usage is particularly effective in the improvement of attention functions, verbal rationality, and visual and executive functions (8-12).

Differences in educational experiences may result in lower performance on neuropsychological tests. For example, a study found cognitive impairment at 17% in HIV-positive patients with high school and higher education levels and 38% in others who received education below high school (13). Education level also affects MoCA scores (14). In our study, MoCA scores were assessed according to the education level, and the scores were significantly higher in the university graduates group. 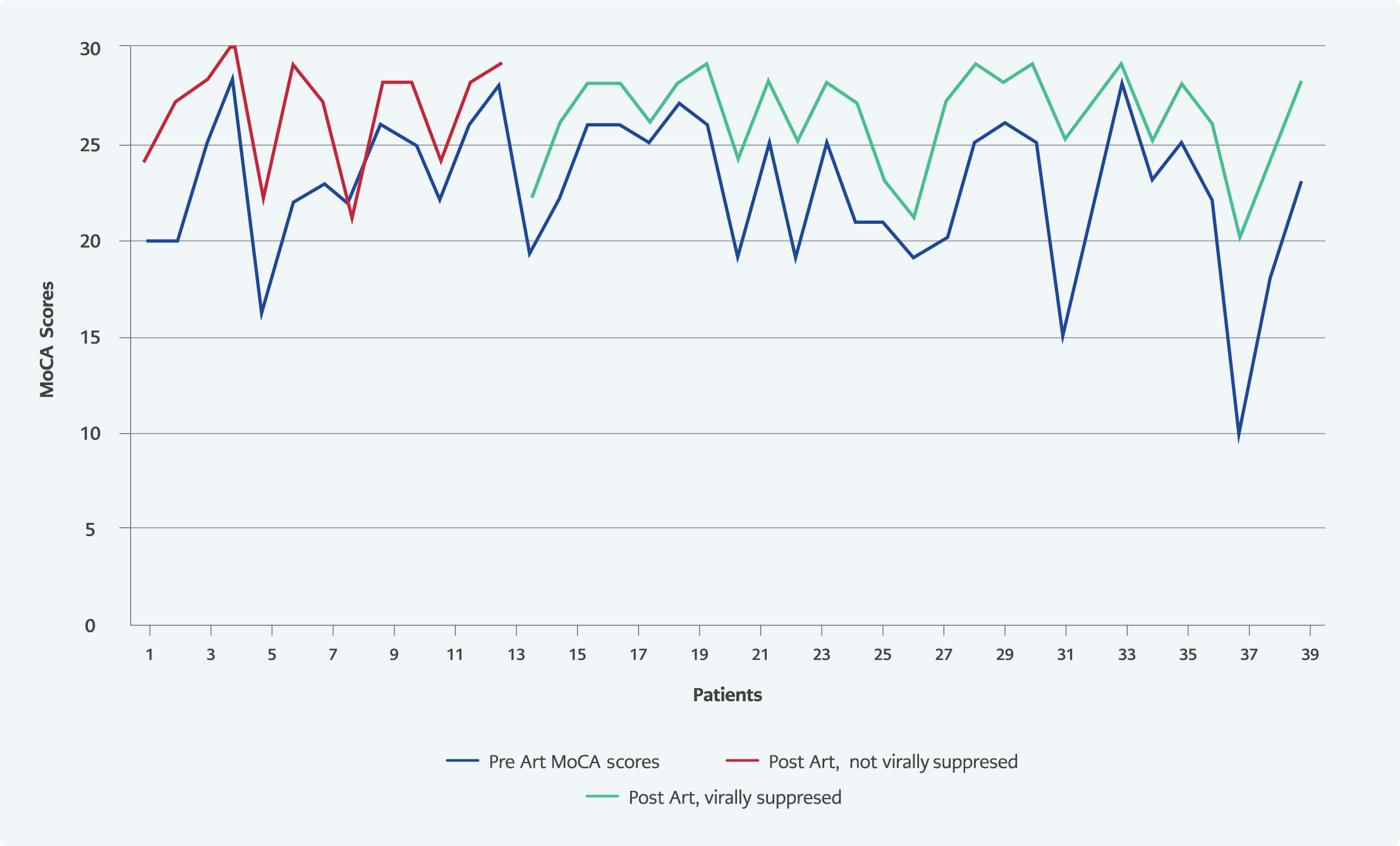 Although virological suppression has been shown to be important, the degree of cognitive impairment may affect drug adherence (23). If patients do not take their ART, they cannot achieve virologic suppression resulting in having HAND; because of this, they can forget to take their ART. This results in a vicious circle. Therefore, starting treatment earlier and ensuring drug adherence are very important.

Studies conducted with the MoCA test in HIV-positive patients have reported that this test was promising for the early detection of cognitive functions and in long-term clinical follow-up (24). In a study in which the MoCA test was used to diagnose HAND in HIV-positive patients over 60 years old, the test’s sensitivity and specificity were 72% and 67%, respectively (25). The sensitivity and specificity of the test may vary depending on the cut-off value determined for the test. Overton et al. reported a prevalence of HAND of 64% by using MoCA in 119 HIV-infected individuals. MoCA had a sensitivity of 59% and a specificity of 81% by using a cut-off point as <26, and the sensitivity increased to 83% if the cut-off point was taken as <27 (26). Optimal cut-offs for the MoCA test vary by race, education, and ethnicity. In a study conducted in Malaysia, demographically corrected MoCA scores were used to determine the prevalence of HAND, and demographically corrected rates were in agreement with international HAND prevalence rates in treated and virally suppressed HIV-positive populations (27). In our study, we used the Turkish version of the MoCA test, which was validated for Turkey, and determined the cut-off value of the test as 21, which is commended value for our country (7, 28, 29).

Our study has some limitations. The first one is the small number of patients, and the second is the effect of educational status on the MoCA test.

Scientific Presentation: The study was presented as an oral presentation at International Forum on Infectious Diseases 2019 (IFID 2019) on March 21-24, 2019.

Acknowledgments: We would like to express our great appreciation to Dr. Faruk Karakeçili for his valuable and constructive suggestions for this research work. We are also grateful to Dr. Umut Devrim Binay, Dr. Orçun Barkay, and Aydın Dikici for their helpful advice and guidance.