Effectiveness of Surgical Prophylaxis Where the Antibiotic Resistance is High

Objective: We aimed to investigate the risk factors for surgical site infections (SSI) and the effectiveness of prophylactic antibiotic use.

Methods: The demographic characteristics, comorbidities, and microbiological examinations of patients diagnosed with SSI who had a cholecystectomy, vaginal hysterectomy, knee prosthesis, hip prosthesis, and gastric surgery between January the 1st, 2014 and December the 31st, 2019 were retrospectively analysed. The diagnosis of healthcare-associated infections and SSI was based on the Centers for Disease Control and Prevention criteria.

Conclusion: We detected multidrug resistance in microorganisms isolated from knee and hip replacement infections. Antibiotic resistance is a big problem, and antibiotic prophylaxis is insufficient to prevent SSI. Doctors should follow up with the patient who underwent surgery closely and take microbiological samples to select appropriate antibiotics when SSI develops.

Surgical site infections (SSI) are defined as infections that occur up to 30 days or one year after surgery in patients with implants, affecting the incision or deep tissue at the surgery site (1). They account for 20% of all healthcare-associated infections (HAI) in hospitalized patients. Patients with SSI are hospitalised additionally 7-11 days postoperatively. They have a two to 11 times higher risk of death compared with patients without SSI (2). Antimicrobial prophylaxis has a primary role in the prevention of SSI (3).

Despite improvements in infection control and prevention, surgical site infections are still a problem associated with mortality and morbidity and seriously burden health resources (4). It was shown that one-year mortality for patients with SSI was 35.4–50%, which was substantially higher than those without infection (24.1–30%) (5, 6). Patient-related and procedure-related factors influence the risk of SSI. Although the causative pathogen usually originates from the patient’s endogenous flora, it may also depend on the surgery type.

Patients who underwent cholecystectomy, vaginal hysterectomy, knee prosthesis, hip prosthesis, and gastric surgery were diagnosed with SSI between January the 1st 2014, and December the 31st 2019 were enrolled in the study. The diagnosis of SSI was based on Centers for Disease Control and Prevention criteria (1). The demographic characteristics and microbiological investigations of patients were analysed retrospectively. The operations, which were followed for SSI surveillance by the infection control team, were examined. We obtained the data from the medical records of our hospital. 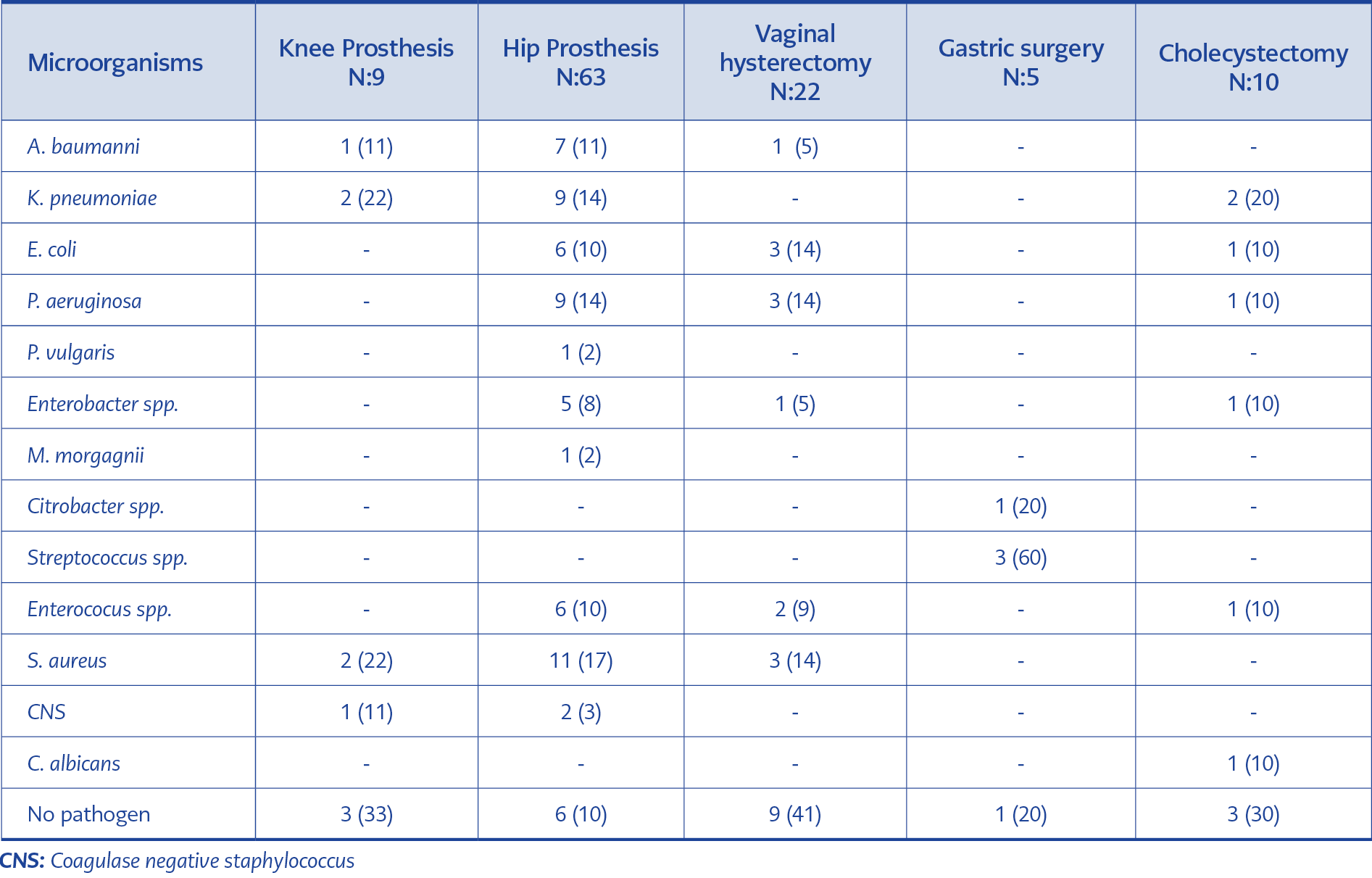 Risk factors for SSI can be due to patient-related and procedure-related characteristics. In our study, most of the patients with SSI were female (70%). The type of operation varied the distribution of age and gender. DM and malignancy are known to be major risk factors for SSI (7-9). Similarly, we found that DM was an underlying risk factor for SSI in all five surgery types. DM was more common in patients with infections of knee prosthesis (67%), and it was followed by the hip prosthesis, cholecystectomy (20%), gastric surgery (20%), and vaginal hysterectomy (14%). Malignancy was an underlying disease in patients who developed SSI after hip replacement, vaginal hysterectomy, and cholecystectomy.

In many SSIs, the responsible pathogens originate from the patient’s endogenous flora. The causative pathogens depend on the type of surgery; Staphylococcus aureus, coagulase-negative staphylococci, Enterococcus spp. and Escherichia coli are the most commonly isolated organisms from SSI (3). Kaya et al. reported that the most common microorganism isolated from SSI was S.aureus (20%) and E.coli (17.8%), K.pneumonia (8.9%), P. aeruginosa (8.9%) respectively (10).

There is a large difference between countries in Europe for the methicillin-resistant S.aureus (MRSA) rates. The mean rate of MRSA detected in HAI was 16.4% in European countries (11).

According to the annual reports of the National Antimicrobial Resistance Surveillance System between 2014 and 2019, the methicillin resistance among S.aureus isolates was 51.85%, 35%, 23.6%, and 40.82%, respectively (12). In the studies from our country, the rate of methicillin resistance in S.aureus isolated from SSI was 25% (7); we found 30% for knee and 38% for hip prosthesis infections. Also, we detected a substantial percentage of Gram-negative bacteria in knee (30%) and hip (60%) prosthesis infections.

In our study, the rate of the Gram-negative bacteria responsible for the infections of the cholecystectomy was 50%, 36% for vaginal hysterectomy, 60% for hip prosthesis, 30% for knee prosthesis, and 10% for gastric surgery. According to recommendations of the recent guidelines, cefazolin or ceftriaxone, or ampicillin-sulbactam was used for prophylaxis of SSI (3). However, carbapenem resistance among Gram-negative bacteria was detected in 60% of the knee and 39% of the hip prosthesis infections.

The role of antimicrobial prophylaxis in reducing the risk of SSI is essential. It is estimated that up to 60% of SSIs are preventable using evidence-based guidelines (13). The problem of antimicrobial resistance is increasing in our country and worldwide (14, 15). The MDR bacteria were found to be responsible for the SSI (16). In our study, microorganisms isolated from knee and hip prosthesis infections are resistant to broad-spectrum antibiotics. Antibiotic prophylaxis was insufficient in preventing surgical site infections in some patients. The rate of inappropriate antibiotic use was 40% for surgical prophylaxis.  The patients received antibiotics longer than advised, contributing to antibiotic resistance.