Necrotizing Fasciitis: Evaluation of 85 Cases and Usage of LRINEC Score

Objective: The present study aims to define the characteristics of the necrotizing fasciitis (NF) cases followed at our hospital and to compare our results with the literature.

Materials and Methods: In this study, NF cases followed and treated at our hospital from January 2005 to April 2019 were evaluated retrospectively.

Results: A total of 85 cases of NF were included in the study. Of the cases, 33 (39%) were female and the median age was 59.8±13.1 years (range: 26-92 years). Diabetes mellitus (DM) (56%) was the most prevalent comorbid condition. Extremities were the most frequently involved field found in 41 (48%) of the cases followed by Fournier’s gangrene found in 34 (40%) of the cases. All of the cases had undergone surgical intervention (debridement and/or amputation) and received broad-spectrum antibiotic therapy. Laboratory risk indicator for necrotizing fasciitis (LRINEC) score was calculated for 60 cases, and it was 6 or higher in 78% of them. Nineteen (22%) of 85 cases had died.

Conclusion: Necrotizing fasciitis affects generally older male patients with DM. In NF cases to avoid the higher risk of mortality, the removal of necrotic tissue via surgical procedure together with antimicrobial therapy is required urgently; therefore, it is very important to differentiate NF from soft tissue infections as soon as possible.  As the LRINEC score predicted NF among nearly 80% of our patients, this score could be used as an early diagnostic tool of NF.

Necrotizing fasciitis (NF), one of the necrotizing soft tissue infections, is an infection that primarily involves subcutaneous adipose tissue, which consists of superficial fascia, vascular and neural structures, and involves in deep fascia and progresses with mortality (1). It may be difficult to differentiate NF from other non-NF complicated soft tissue infections at the early clinical phase.  Early diagnosis needs a high index of suspicion and prompt surgical debridement combined with a broad spectrum of antibiotics is the only way to reduce mortality and morbidity. Surgical intervention should be performed as early as possible; all necrotic tissues should be debrided, and repeated debridement should be performed if necessary.

This study aimed to retrospectively scrutinize clinical characteristics, laboratory findings, complications and treatment outcomes of the cases followed at our hospital for NF and to compare the data with the literature.

In the present study, all of the patients that had been followed and treated for NF between January 2005 and April 2019 at our hospital were retrospectively evaluated.

Diagnosis of NF was made by physical examination findings suggesting NF (fever, swelling, erythema, severe pain, dark skin, necrosis and presence of hemorrhagic bullae) and macroscopic findings consistent with NF (greyish-colored and necrotic fascia, muscular fascia that is easily decomposed with finger pressure and presence of a malodorous discharge) at the time of surgery and histopathological examination of a tissue sample obtained at the time of surgery. 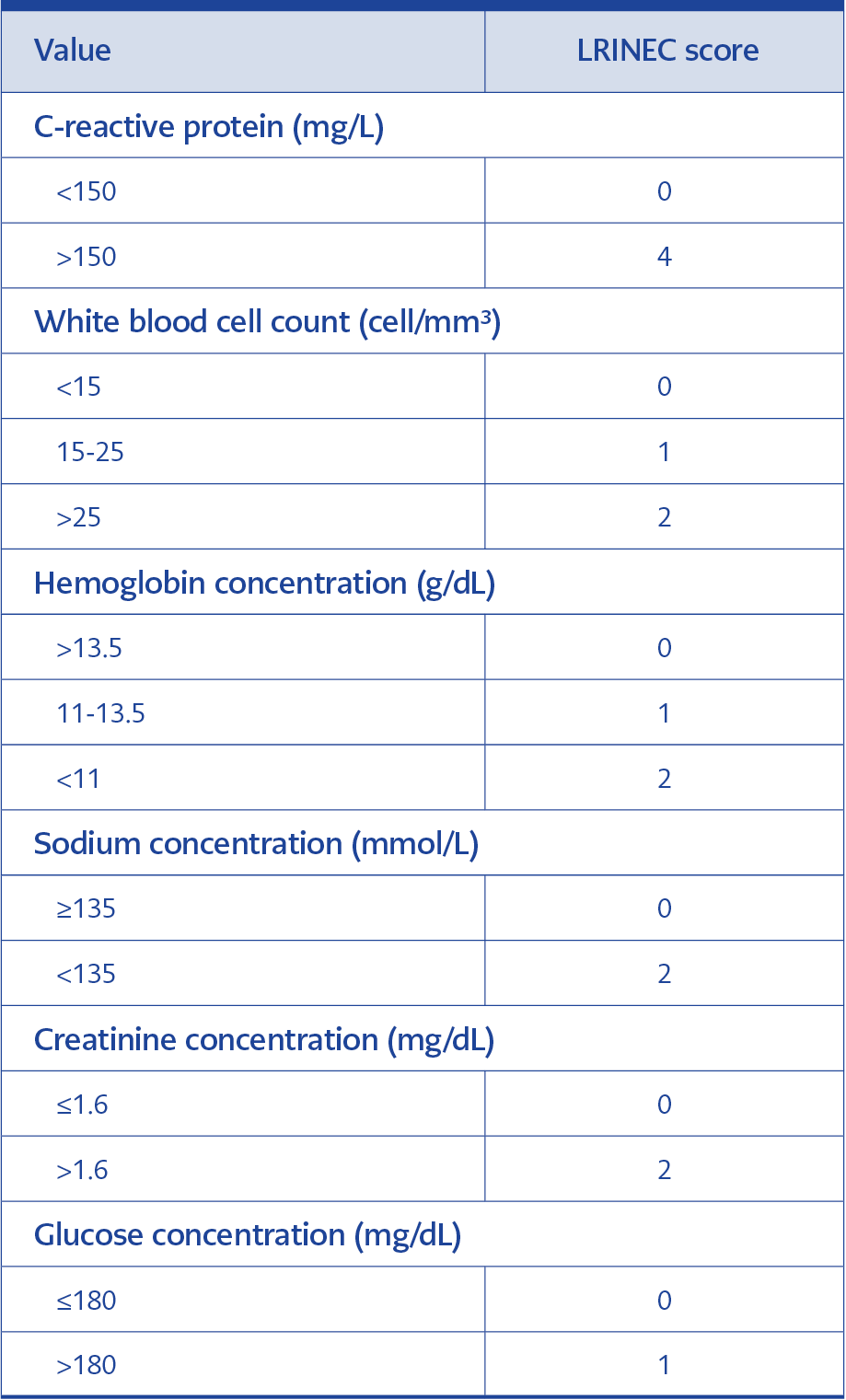 Table 2. Staging of necrotizing fasciitis according to LRINEC score.

The cases were classified according to the LRINEC score (Table 1), which is a laboratory risk indicator score for necrotizing fasciitis, and probability for NF was assessed according to Table 2.

Başkent University Ethical Committee for Research Studies approved the study with the decision number of 26319-2020.09.15.

Portal of entry of microorganism could not be defined in 76% of the cases, which were accepted as idiopathic NF.

Microbiological cultures of tissues obtained during surgery were available for 68 (80%) cases and growth was detected in 51 (75%) of them.

Multiple and single microorganisms were isolated in 20 (39%) and 31 (62%) of the cases, respectively, which were classified as Type I NF and Type II NF.

Escherichia coli (33%), enterococci (27%) and staphylococci (23%) were the most frequently isolated bacteria. More than half of the staphylococci were coagulase-negative.

Necrotizing fasciitis is an infection known since Hippocrates and is characterized by rapidly progressive necrosis of the skin and soft tissue (2). Although the disease is seen at all ages and in both genders, it is more prevalent at the age of 50-60 years and in males (3) as consistent with our results.

Necrotizing fasciitis generally presents itself with pain, swelling and redness. Consistent with the literature (4), swelling, redness, fever and pain were the most common presenting symptoms also in our cases. Diabetes mellitus is the most frequent comorbid condition with NF and was reported from 15.2% to 71% of the NF cases in the previous studies (5). In the present study as well, the most common comorbidity was diabetes mellitus with a prevalence rate of 56%, which is similar to the literature.

An inciting event can not be detected in 45% of NF cases and these are called primary or idiopathic NF (6). If NF appears after a known etiology, then it is called secondary NF and usually occurs due to skin trauma (laceration, insect bite, improper injection, burn, or surgical incision), penetrating trauma, perirectal abscess, incarcerated hernia, and skin ulcer (7). Of our cases, 76% had idiopathic NF.

Necrotizing fasciitis usually involves the extremities (particularly lower extremities) and genital system (6). Necrotizing fasciitis that involves the genital system (perinea) is called Fournier’s gangrene and is typically begins from the scrotal region in males and the labial region in females and rapidly spreads over perinea, gluteal and abdominal regions (9). In their studies, Liu et al. (9) and Turhan et al. (10) most frequently reported extremity involvement, whereas Vayvada et al. (6) most frequently reported perineal and inguinal region involvement. In our study, we observed that extremity involvement was the most frequent followed by Fournier’s gangrene.

It is difficult to distinguish NF from other soft tissue infections in the early phase of the disease. Therefore, Wong et al. developed a laboratory risk indicator score for NF. Although the LRINEC scoring system is not specific, it is a quite sensitive method (11). The LRINEC score is a scoring system that measures the changes in these biochemical parameters and indicates the presence of NF based on the severity of sepsis (11). The highest score in this scoring system is 13. As is demonstrated in Table 2, cases are classified according to the LRINEC score as low-risk, moderate-risk and high-risk for NF. Positive predictive value and negative predictive value of LRINEC score of 6 or higher are 92% and 96% respectively (11). Based on the LRINEC score, 13 cases (22%) were in the low-risk, 12 cases (20%) were in the moderate-risk and 35 cases (58%) were in the high-risk class.  In the present study, 47 (79%) of the cases with available LRINEC scores had a LRINEC score > 6 (moderate and high-risk class). Su et al. reported that mortality is significantly higher in the patients with LRINEC scores of 6 or higher (12). Corbin et al. demonstrated that the risk of complication as well is higher in the patients with a LRINEC score of 6 or higher (5). When the deceased cases were evaluated according to the LRINEC score; it was determined that the LRINEC score could have not been calculated in two cases, whereas it was <5 (low risk) in two cases and > 8 (high-risk) in 5 cases.  The LRINEC score might help predict mortality in NF.  Cases with a LRINEC score of 6 and higher should be precisely evaluated in terms of hospitalization, surgical procedure, and close monitoring (11). LRINEC scoring is extremely beneficial in supporting diagnosis and estimating mortality and complications and we, therefore, think that this simple scoring system needs to be used in differentiating NF from other soft tissue infections in the patients admitted to the emergency room.

Early diagnosis, removal of necrotized tissue up to the intact tissue and performing repeated debridement, when necessary, broad-spectrum antibiotic therapy, adequate oxygenation of infected tissue together with adequate nutrition, and fluid and electrolyte support form the basis of the treatment in NF (13). Considering all potential microorganisms, broad-spectrum antibiotic therapy, which is also effective against anaerobic microorganisms, should be started as soon as possible in the treatment of NF after obtaining a sample for culture. For the empirical treatment of polymicrobial necrotizing fasciitis, antimicrobial therapy should be started including MRSA and aerobic and anaerobic bacteria (9). Piperacillin-tazobactam or carbapenem or the combination of ceftriaxone and metronidazole or the combinations of one of the fluoroquinolones and metronidazole with one of the glycopeptides, daptomycin and linezolid options should be used (9). Clindamycin in combination with penicillin is recommended in the treatment of monobacterial NF caused by Group A Streptococcus. Antibiotherapy may be rearranged based on the results of the culture. It was determined that the cases in our study had received broad-spectrum antibiotic therapy in the first 24 hours and the most used antibiotic therapy was the combination of carbapenems and glycopeptides (69%).

The most important part of treatment includes early and extensive surgical exploration and debridement of all necrotized tissues up to the well-vascularized tissue (14). Early surgical debridement within the first 24 hours after hospitalization favorably influences mortality (15). A single debridement is inadequate in case of progressed, resistant and extensive infection; necrosis rapidly progresses and causes serious systemic toxicity, and therefore repeated debridement may be necessary. Although there are publications that recommend 24-48-hour intervals for repeated debridement, there is no definite consensus (6). In the present study, the mean number of debridement after hospitalization was 2.7 (range: 1-12). Amputation is lifesaving when sepsis and shock are in question in NF that involves extremities. In diabetic patients, it is a problem to perform extremity protective surgery in necrotizing infections of the lower extremity, given morbidities such as peripheral artery disease, immunosuppression and neuropathy. In these patients, high-level amputation or flap applications covering the large soft tissue defect with tendons and bone can be reduced with the use of the dermal regeneration matrix recommended by Narayanan and his friends (16). In our study 15 (18%) cases had undergone amputation and none of them died.

Nineteen (22%) of the cases included in the study died. Six of them had Fournier’s gangrene, two cases developed NF in the abdominal region, and one case had NF in the extremity. It was observed that the general status of six cases with Fournier’s gangrene was poor at admission and they were lost during the follow-up period because of sepsis, whereas one case died of acute cerebrovascular event and two cases died of nosocomial infection. Whilst the mortality rate was 22% in the present study, this rate was reported to be 14.3-43.3% in the studies from Turkey and 12.1-45.6% in the studies from abroad (3-6, 9, 10, 15, 17). We think that this low rate as compared to the literature results from early diagnosis because of suspecting NF in the cases and starting treatment (surgery and antibiotic) early, as well as keeping the infection under control by serial debridement procedures.

Since early diagnosis and treatment are lifesaving in this infectious disease with high mortality, we think that clinicians should know well about disease characteristics, should suspect NF, particularly in the elder patients with underlying disease such as diabetes mellitus and chronic renal insufficiency, and should make the differential diagnosis of the disease from other soft tissue infections using also LRINEC score.

Informed Consent: This is a retrospective study for which no formal consent is required.

Financial Disclosure: This study was approved by Başkent University Institutional Review Board (Project no: KA20/350) and supported by Baskent University Research Fund.