Background: We aimed to determine diagnostic sensitivity and specificity of clinical and laboratory findings in patients with Crimean-Congo hemorrhagic fever (CCHF).

Methods: We retrospectively reviewed the characteristics of patients who were suspected of CCHF. The patients were stratified into two groups as positive and negative based on results of CCHF specific IgM and viral RNA by real-time polymerase chain reaction (RT-PCR).

Conclusion: If patients have myalgia and transaminase elevation with a history of husbandry at endemic regions, CCHF should be considered.

The Crimean-Congo hemorrhagic fever (CCHF) is caused by a RNA virus (Nairovirus) Bunyaviridae family. It is generally transmitted by tick bite (Hyalomma marginatum), particularly in spring and summer, and the blood of viremic animals (1). The CCHF has the most widespread geographic distribution among tick-borne infections and it is endemic approximately in 30 countries in Africa, Asia, Southeastern Europe and the Middle East. In Turkey, CCHF was first described in 2002, and the crude fatality rate was calculated as 5% (2-4). Originally, it was seen in the northern provinces of Central Anatolia and the eastern provinces of the Karadeniz region. However, recent reports show that it has become increasingly common with cases from different regions (1, 5, 6).

The mean incubation period is 2-7 days and may prolong up to 12 days. In symptomatic cases, non-specific symptoms such as fever, myalgia and headache are seen during the pre-hemorrhagic phase while epistaxis, hematemesis and melena are the most common symptoms during the hemorrhagic phase. Thrombocytopenia is almost universal and transient leucopenia may also be detected. In addition, elevated transaminase levels can also be observed due to hepatic injury (2, 7, 8). Detection of specific IgM and IgG antibodies using immunofluorescence assay (IFA) and viral RNA using real-time polymerase chain reaction (RT-PCR) are used in the diagnosis (9). In previous studies, the rate of tick bite history ranged from 60% to 73% in cases with CCHF (2, 4, 10). Thus,  CCHF is suspected in cases presented with non-specific findings regardless of tick bite history in endemic regions. This results in the overuse of specific diagnostic tools and delays in the diagnosis of cases with CCHF. There is a limited number of studies on diagnostic sensitivity and specificity of clinical findings and routine laboratory tests before using specific diagnostic tools.

We aimed to estimate diagnostic sensitivity and specificity of clinical and laboratory findings in patients with suspected CCHF.

The study was approved by the Ethics Committee on Non-Interventional Clinical Trials of Karabük University. The study included patients (aged>18 years) who admitted to the infectious disease department with an initial diagnosis of CCHF. Data regarding age, gender, history of husbandry or agriculture, tick bite history, presenting complaints (fever, myalgia, headache, hemorrhage, nausea and vomiting) and laboratory findings at presentation including leukocyte and platelet count, hemoglobin, transaminases, LDH, creatinine and INR were retrospectively extracted from hospital database and patients’ files for all cases. The patients with platelet count<150,000/mm3 were considered as thrombocytopenia. Patients were assigned into groups according to platelet count: <20,000, 20,000-49,000, 50,000-99,000 and 100,000-149,000/mm3. The patients with aspartate aminotransferase>≥50 IU/L and/or alanine aminotransferase≥40IU/L were considered to have transaminase elevation. Lactate dehydrogenase (LDH) elevation was defined as LDH>250 U/L. Creatinine value <1.4 mg/dl was considered as normal while creatinine level≥1.5 mg/dL was defined as high. The international normalized ratio (INR) was also recorded. INR values were classified into two groups: <1.2 and ≥1.2. The patients with specific IgM antibodies as detected by IFA or positive RT-PCR results were defined as CCHF-positive, while those with negative IgM antibodies and RT-PCR were defined as CCHF-negative. Demographic characteristics and laboratory findings were compared between CCHF-positive and CCHF-negative groups. 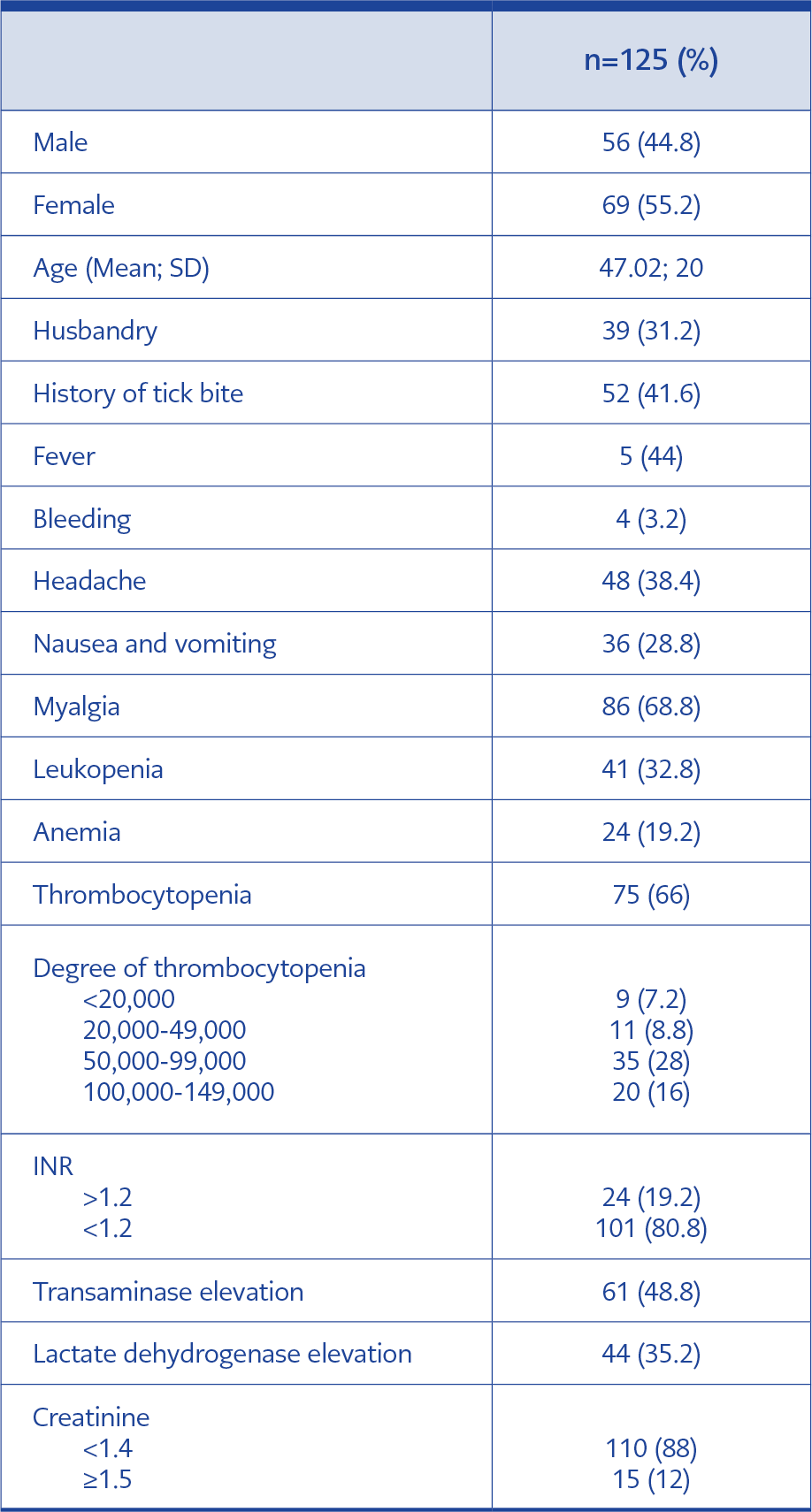 Table 1. Clinical and Laboratory characteristics of all the patients who were suspected of Crimean-Congo Hemorrhagic Fever. 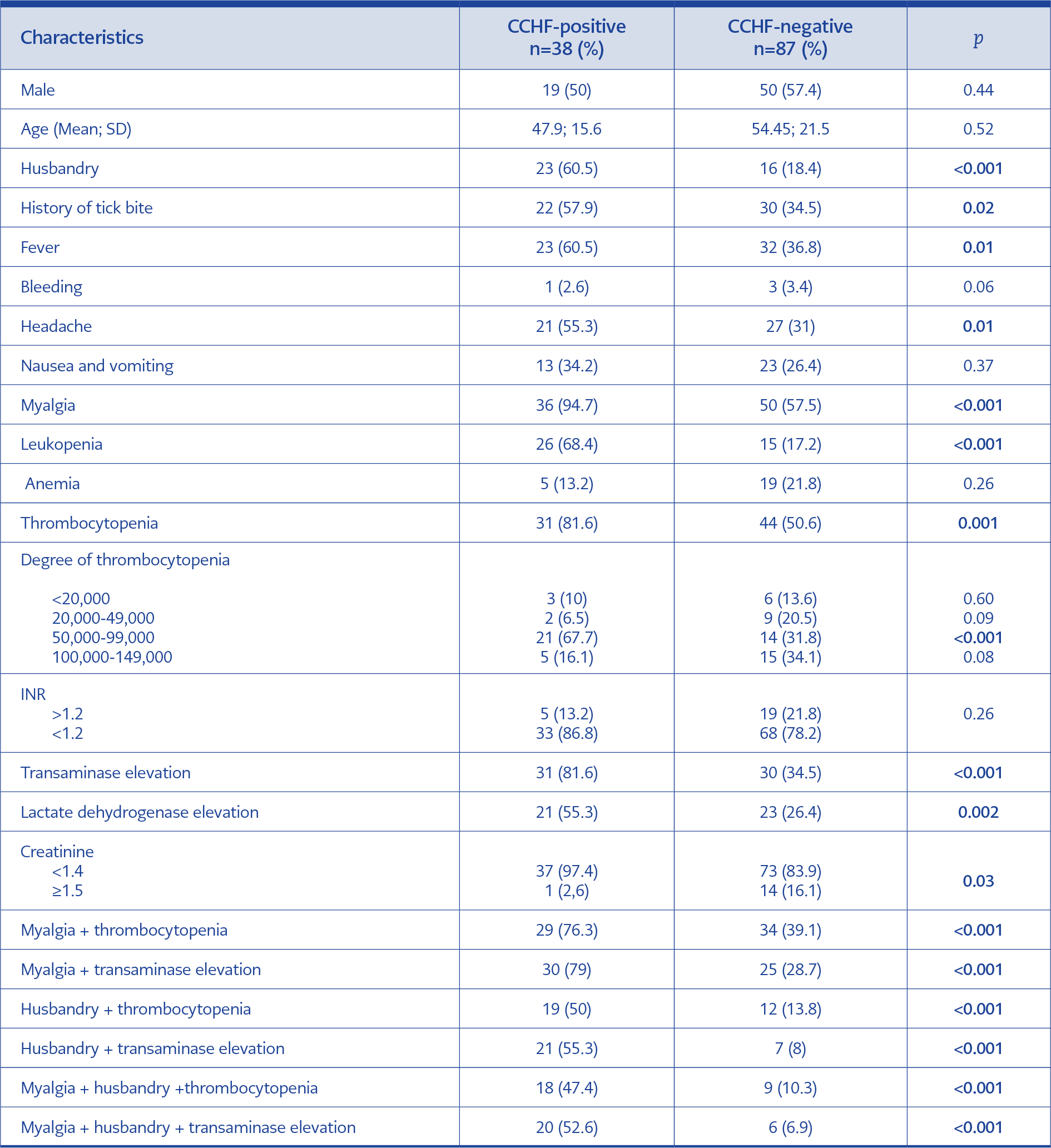 Table 2. Clinical and laboratory characteristics of CCHF-positive and CCHF-negative cases. 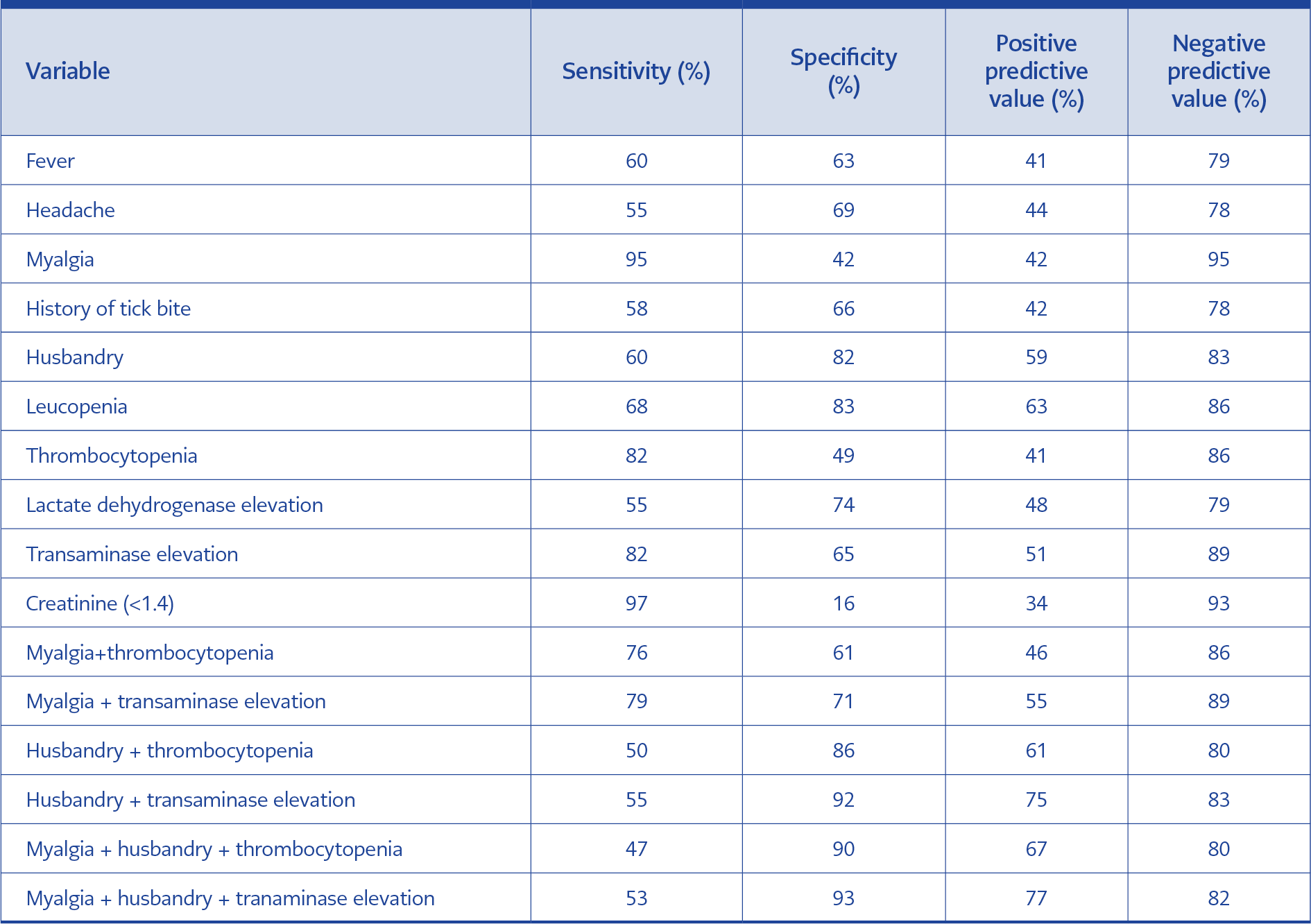 Of 125 patients included, 55.2% were female and 44.8% were male. The mean age was 47±20 years. The most common presenting complaint was myalgia (68.8%), while the most common laboratory finding was thrombocytopenia (60%). The history of a tick bite was detected in 41.6% of cases, and the occupation of 31.2% was husbandry. Table 1 presents demographic, clinical and laboratory characteristics of cases. CCHF was diagnosed in 30% (n=38) of cases, and specific CCHF tests were found to be negative in 70% (n=87). In the CCHF-positive group, a specific IgM antibody was detected in three cases (7.9%) using the ELISA method, and in the rest of the group,  viral RNA was shown using RT-PCR. 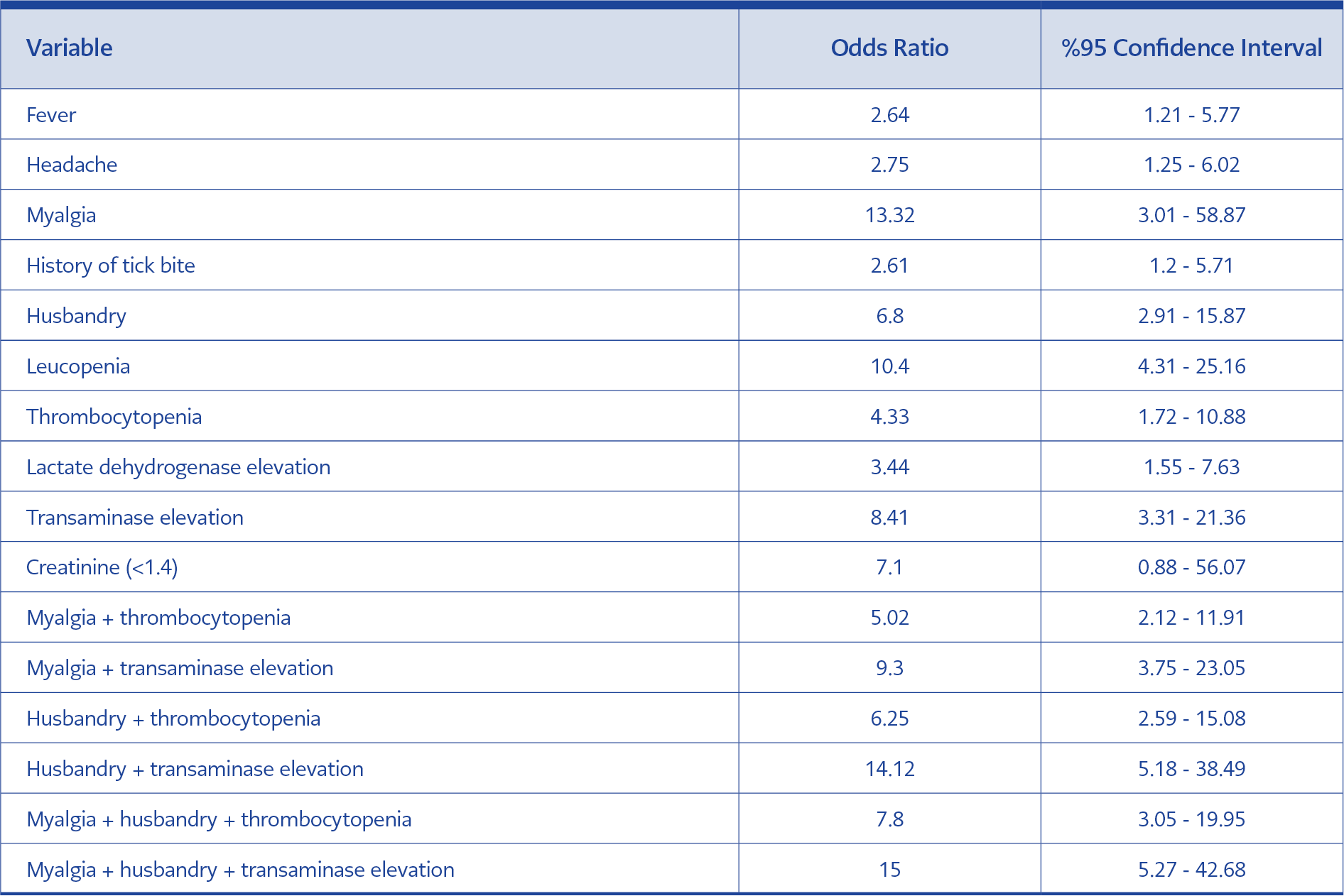 Table 4. Comparison of clinical and laboratory findings of the patients by Odds ratio of being CCHF positive versus CCHF negative ones.

Clinical and laboratory characteristics were compared between CHF positive and negative patients (Table 2). Diagnostic sensitivity, specificity, positive predictive and negative predictive values were calculated for variables found to be significantly different between groups (Table 3). The highest sensitivity and negative predictive value were detected for myalgia (95% and 95%, respectively). Normal creatinine value found to be insignificant (OR: 7.10; 95% CI: 0.88-56.07; p>0.05). When the association of multiple findings were assessed, the highest sensitivity (79%) was found for myalgia plus transaminase elevation (OR: 9.3; 95% CI: 3.75-23.05; p<0.05). The highest specificity (93%) was found for myalgia plus history of husbandry plus transaminase elevation (OR: 15; 95% CI: 5.27-42.68; p<0.05) (Table 4). 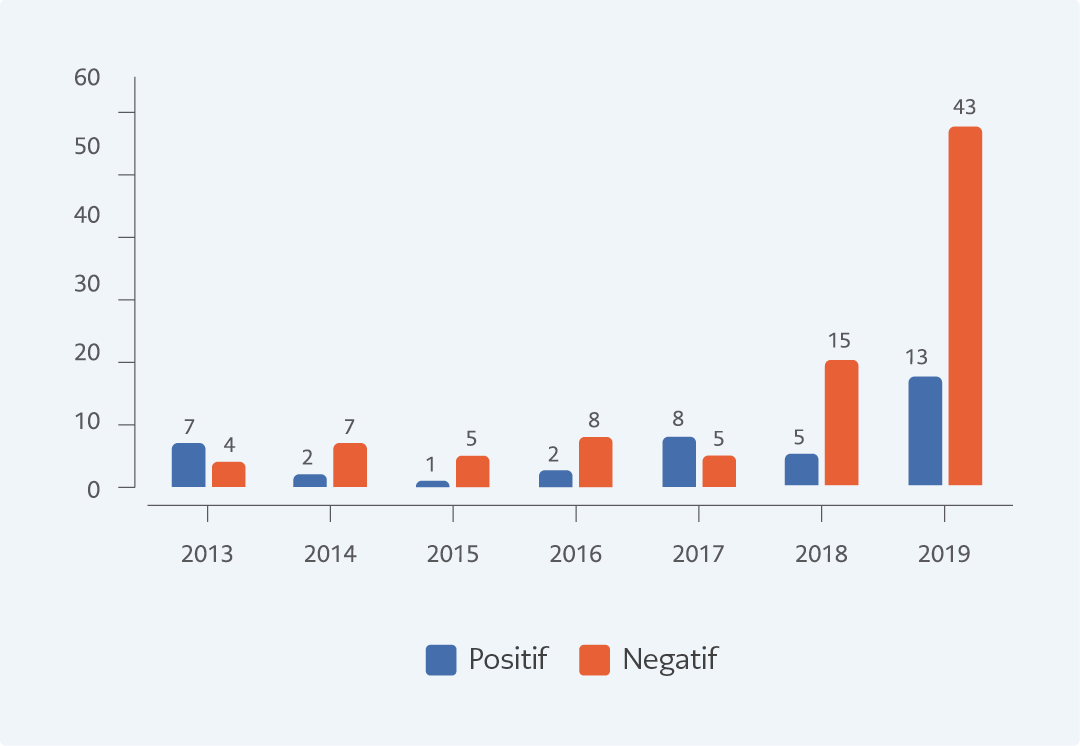 Figure 1. Distribution of Crimean-Congo Hemorrhagic test positivity among the suspected cases by the year.

When the distribution of cases was assessed according to years, seven (64%) of 11 patients in 2013, two (22%) of nine in 2014, one (17%) of six in 2015, two (20%) of ten in 2016, eight (62%) of 13 in 2017, five (25%) of 20 in 2018, and 13 (23%) of 56 in 2019 were CCHF positive (Figure 1). Two patients with positive results died because of massive bleeding and intravascular coagulopathy during follow-up; however, 36 patients achieved complete recovery. One patient with epistaxis at presentation was also discharged after resolution of epistaxis. Among cases in the negative group, HIV-related thrombocytopenia was detected in one patient while myelodysplastic syndrome in one and immune thrombocytopenic purpura in two patients. Non-specific viral infection was diagnosed in 83 cases in the negative group.

CCHF virus is mostly transmitted mainly by a tick bite, direct contact to blood and secretions of viremic animals and as occupational contamination in healthcare providers. It was shown that, albeit rare, it can be transmitted sexually or with maternal transmission (11-13). It is more commonly seen in male patients working in agriculture or husbandry (4). In our study, male: female ratio was comparable between the groups, while history of husbandry was found to be more common (60.5%) in the positive group (p<0.001). The rate of tick bite history varies from 60% to 73% in the literature (2, 4, 10). We found as 57.9% in the positive group, indicating a lower rate compared to the literature. However, it was significantly higher when compared to the negative group (34.5%; p=0.02).

In previous studies, fever, myalgia, headache, nausea and vomiting have been identified as the most prominent clinical symptoms (7, 8, 14, 15). In our study, fever, headache and myalgia rates were significantly higher in the positive group; however,  nausea and vomiting rates were comparable between groups. Of the cases included, one presented at hemorrhagic phase with epistaxis while two patients progressed into hemorrhagic phase during follow-up. No significant difference was detected in the finding of hemorrhage between positive and negative groups.

Leukopenia, thrombocytopenia and elevated transaminase, creatinine phosphokinase (CPK) and LDH are common laboratory findings in CCHF. In addition, prolonged prothrombin time (PT) and activated partial thromboplastin time (aPTT) elevated CCHF and increased INR values are generally detected during the hemorrhagic phase (7). In a study by Gozdas et al., rates of leucopenia, thrombocytopenia, transaminase elevation and LDH elevation were higher in the positive group than in the negative group (93.5%, 93.5%, 67.7% and 87.1%, respectively)  (16). Similarly, they were found to be higher in the positive group in our study but the rates were lower (68.4%, 81.6%, 81.6% and 55.3%, respectively). In our study, no significant difference was detected in INR elevation among groups. This may be because the majority of our patients presented at the pre-hemorrhagic phase. In previous studies, creatinine elevation has not been considered as an important feature in CCHF cases (2, 7, 17, 18). However, in some studies, elevated creatinine level was reported as laboratory findings of CCHF (19). Normal creatinine value was more common among positive cases in our study, but the difference did not reach statistical significance.  Even if there is no tick bite history in endemic regions, the diagnosis of CCHF is not ruled out since individuals working in agriculture or husbandry may not recognize tick bite or contact with viremic animals (17, 20, 21). In such cases, the diagnosis should be made based on clinical symptoms and laboratory parameters. Kayadibi et al. developed a diagnostic index based on clinical and laboratory findings (22). In our study, the highest sensitivity (79%) was detected for the association of myalgia and transaminase elevation while the highest specificity was detected for association of myalgia, history of husbandry and transaminase elevation. In addition, the negative predictive value was found to be higher for these clinical features alone and in combination. CCHF remains to be an important public health issue in Turkey (1). Our data indicated a variable annual number of cases in our region.

This study has some limitations: retrospective design, relatively smaller sample size, and the lack of bilirubin, albumin, fibrinogen, CPK, PT and aPTT values. Nevertheless, it may be pioneering for more comprehensive and larger series.

Our results show that working in agriculture-husbandry, myalgia and transaminase elevation are particularly important in the endemic region. Therefore, it is recommended that specific diagnostic methods such as RT-PCR should be used in cases presenting such features.