SARS-CoV-2 Infection may be Prevented with Cytochrome Inhibitors: Cobicistat and Ritonavir

Objective: Highly contagious character of severe acute respiratory syndrome coronavirus 2 (SARS-CoV-2) and the lack of specific drugs have led many scientists worldwide to re-evaluate the molecules currently in use for other diseases/viruses. Thus, high-throughput screening with docking studies has the rationale to identify potential therapeutics from existing drug molecules. Conflicting results of the studies, including SARS-CoV-2 and human immunodeficiency virus (HIV) coinfected population, suggested a possible preventive effect of antiretroviral regimens they have been receiving.

Materials and Methods: Interactions between the widely used antiretroviral molecules, in particular; abacavir, cobicistat, dolutegravir, elvitegravir, emtricitabine, lamivudine, raltegravir, and tenofovir, and the main proteins on SARS-CoV-2 that may be targeted for SARS-CoV-2 infection were analyzed using molecular docking studies.

Results: Analysis of the compounds strikingly revealed that not the antiretroviral drugs but cobicistat and ritonavir, the inhibitors of cytochrome P450, had strong interactions with the main protease active site and RNA polymerase on SARS-CoV-2, as well as the active site of angiotensin-converting–enzyme 2, the protein that enables the entry of the virus into human cells.

Conclusion: Our results suggest cobicistat and ritonavir may be used to prevent SARS-CoV-2 infection.

Worldwide, 37.7 million people are infected with the human immunodeficiency virus (HIV) (4). Since early in the COVID-19 pandemic, there has been a growing interest in exploring the impact of COVID-19 among people living with HIV (PLWH). Although initial studies assessing the severity of COVID-19 among PLWH do not suggest poorer outcomes, recent findings showed a higher risk of morbidity and mortality, particularly in those with lower CD4 cell counts, unsuppressed HIV viremia and comorbidities mentioned above (5, 6). Still, it is debated whether PLWH have an increased risk of severe COVID-19, as the data come from cohort studies performed with unmatched populations. Despite the existing debate, World Health Organization (WHO) Global Clinical Platform for COVID-19 announced HIV infection as an independent risk factor for severe COVID-19 (7). The susceptibility of PLWH to SARS-CoV-2 infection has also been debated. The incidence of COVID-19 among PLWH ranges between 0.3-5.7% (5, 8). Current data revealed that SARS-CoV-2 infection rates among PLWH are not higher than their HIV-negative counterparts (8, 9). It was speculated that PLWH have a lower risk of SARS-CoV-2 infection rates in terms of preventive effects of antiretroviral therapy (ART) against COVID-19 (8). In two cohort studies from Spain and South Africa, tenofovir disoproxil fumarate use was linked with lower SARS-CoV-2 infection rates (8,10). In a letter by Joob et al., where the authors shared their observation in Thailand within a high prevalence area of HIV infection, authors reported that HIV-infected patients on antiretroviral treatment (lopinavir/ritonavir) have not been infected with SARS-CoV-2 and concluded that antiretroviral treatment might be a protective factor for PLWH (11).

On the other hand, Ayerdi et al., reported higher SARS-CoV-2 seroprevalence in tenofovir disoproxil fumarate/emtricitabine users compared to the control group (12). Similarly, the Prevenir ANRS study group couldn’t find any evidence of a preventive effect of tenofovir disoproxil fumarate/emtricitabine against SARS-CoV-2 infection (13). Also, results of the studies investigating the therapeutic role of lopinavir/ritonavir and darunavir/cobicistat in SARS-CoV-2 infection were not in favor of using these antiretroviral drug combinations (14-17). Unfortunately, there is a lack of population-based studies assessing the COVID-19 susceptibility of PLWH who receive different antiretroviral molecules. Consequently, whether various antiretroviral drugs have preventive effect against SARS-CoV-2 infection or PLWH under ART have a milder course of COVID-19 still remains unanswered.

Controversial results of the studies mentioned above led us to analyze the widely used antiretroviral molecules, in particular; abacavir, cobicistat, dolutegravir, elvitegravir, emtricitabine, lamivudine, raltegravir, and tenofovir, for possible interactions with SARS-CoV-2 as well as angiotensin-converting enzyme 2 (ACE2), the protein that participates in the entry of SARS-CoV-2 into human cells. 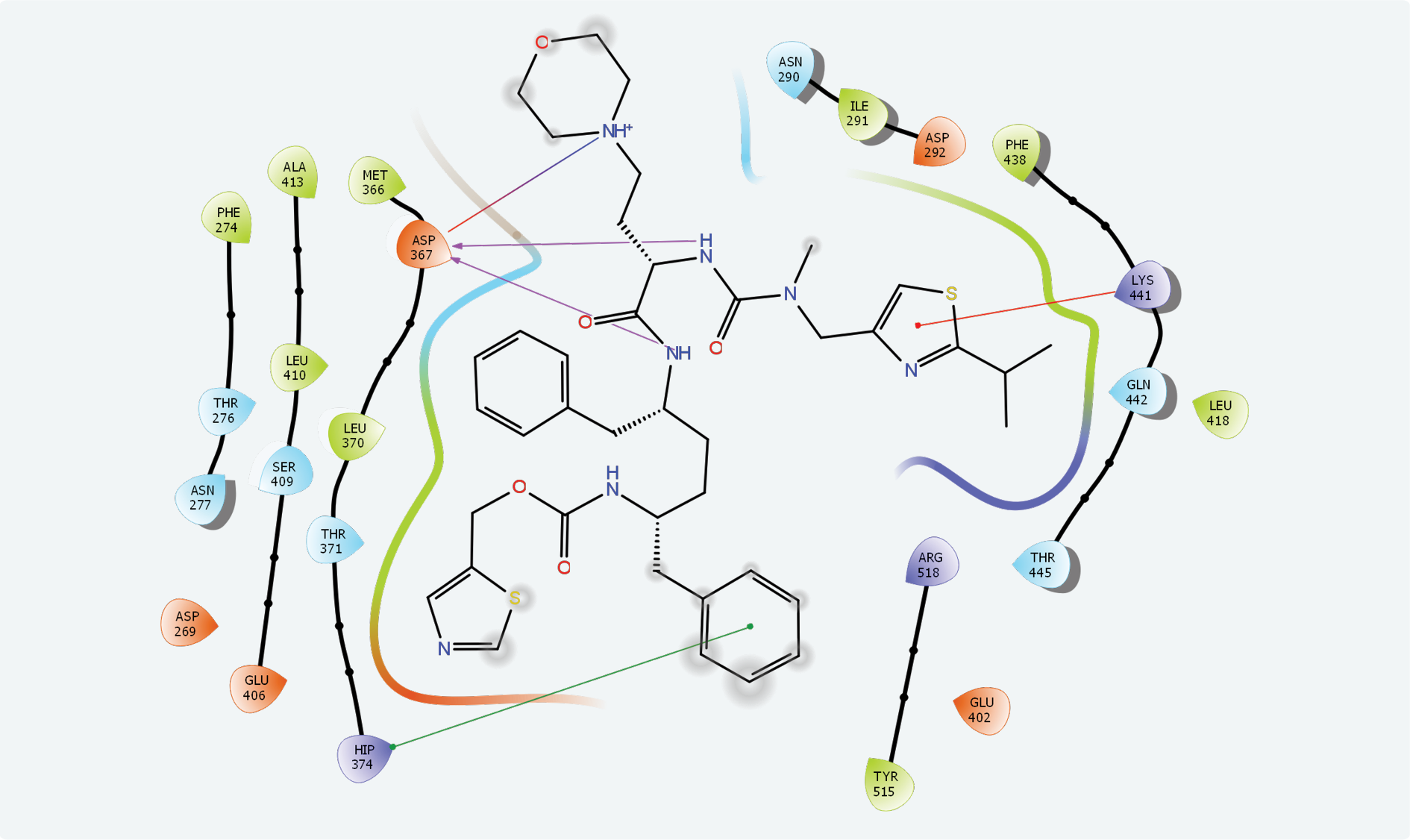 Two possible active sites have been identified on “A” chain of ACE2 by the “Binding Site Detection” module. XP docking for site 2 (x: 99.52, y: 10.48, z: 162.85) revealed the strongest interaction with cobicistat with a Glide score of -6.988 and Glide emodel score of -98.644. Ritonavir showed the second highest interaction with -6.210 and -98.377 Glide and Glide emodel scores, respectively. Compared to these scores, interactions of other molecules with active site 2 were quite low. Cobicistat and ACE2 active site had strong chemical interactions with hydrogen bonds, π–π stacking and hydrophobic interactions (Figure 1). 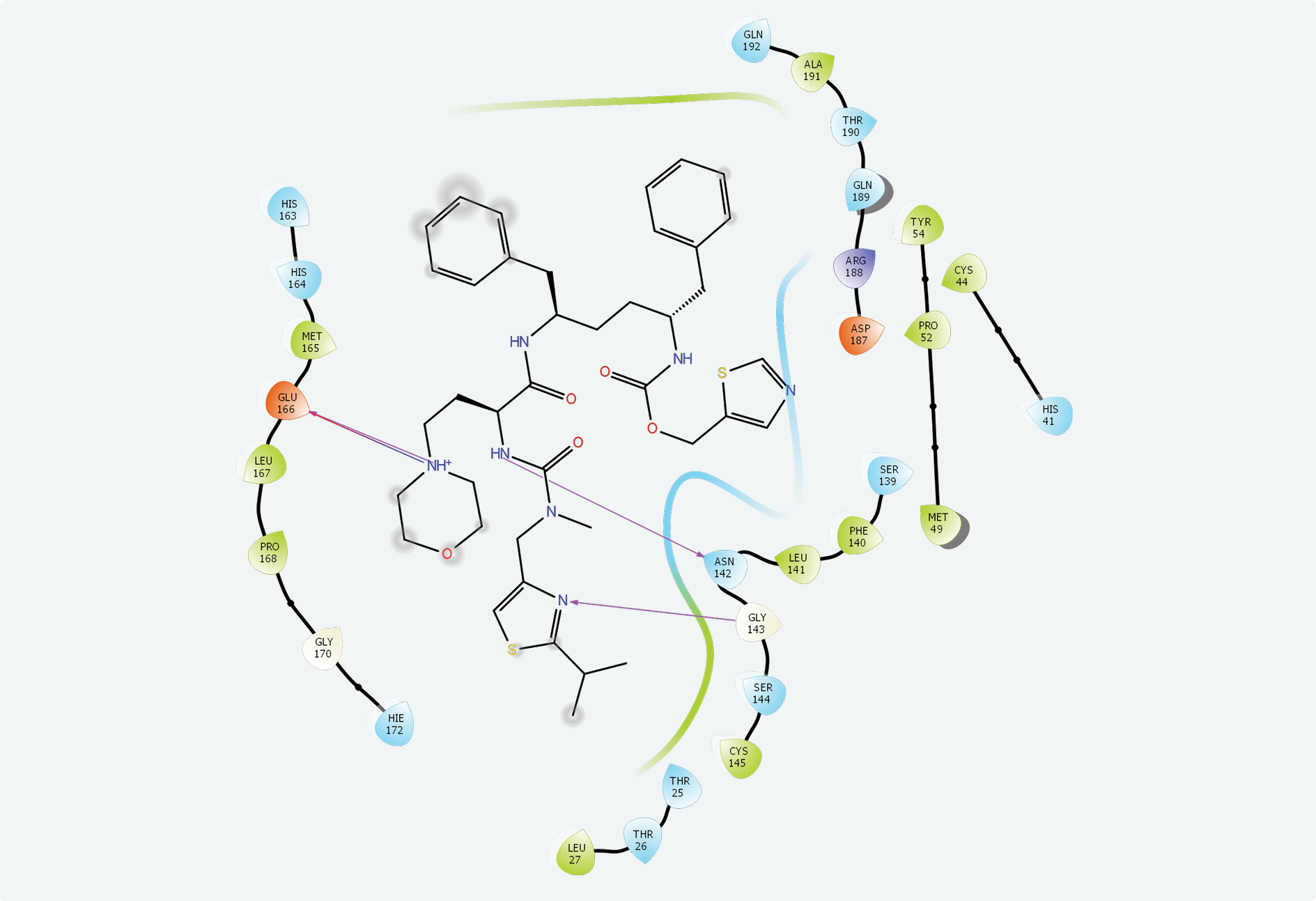 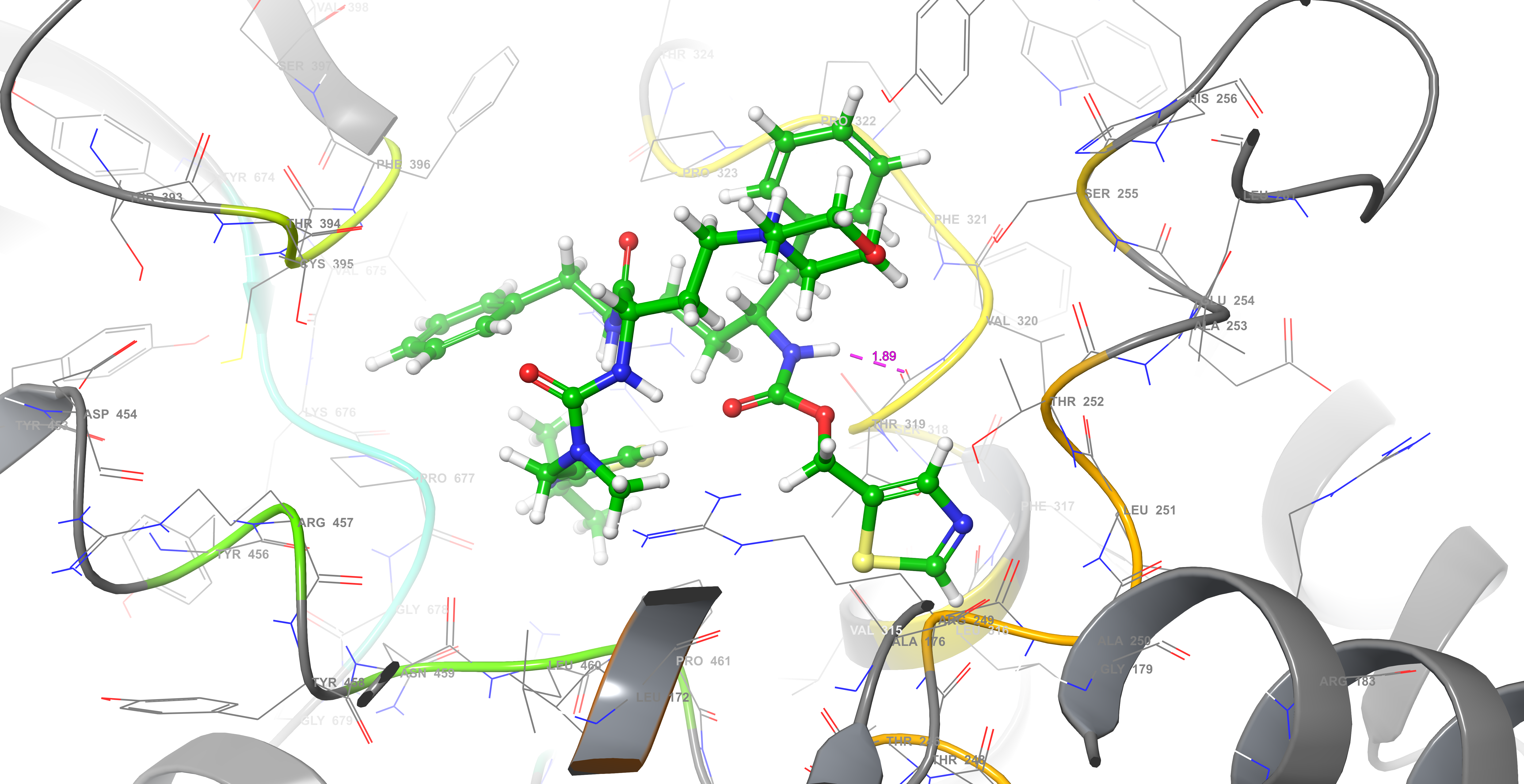 By using remdesivir, a known inhibitor of RNA polymerase (PDB code 6M71), binding site 2 was confirmed to be the active region of this enzyme. Yet, docking analyses were performed for all five binding sites on RNA polymerase. Again, SP docking showed that cobicistat has the strongest interaction with binding site 2 (XP docking score: -6.012, Glide score: – 7.639, Glide emodel score: -91.419, MM-GBSA value: -108.03). Although with higher energies, ritonavir (Glide score: -5.973, Glide emodel score: -76.862, MM-GBSA value: -78.13) also interacted with this site as while no interaction was found with other compounds. Chemical interactions between cobicistat and RNA polymerase binding site 2 were through one hydrogen bond and hydrophobic interactions (Figure 3).

In the docking procedure performed in this study, remdesivir, an RNA polymerase inhibitor, showed the highest interaction in RNA polymerase binding site 2, and other compounds other than cobicistat and ritonavir did not interact. In addition, obtaining the correct pose by re-docking the ligand to the main protease active site showed the reliability of our docking studies.

Finding new drugs via traditional methods is a time-consuming and expensive process. Therefore, molecular docking appears to be a useful way to find candidates from an existing library (23). To the best of our knowledge, the antiviral activity of cobicistat and ritonavir against SARS-CoV-2 has not been explored in the literature. Instead, both molecules act as pharmacokinetic enhancers by increasing the systemic exposure of co-administered antiviral agents. The present study indicated that compared to other molecules analyzed, cobicistat had the strongest interaction with SARS-CoV-2 RNA polymerase and main protease, which may suggest a rather unexpected inhibitory/antiviral effect. Ritonavir, a chemically similar antiviral agent, also interacted with these proteins with higher energy. In line with our findings, in several molecular screening studies, cobicistat and ritonavir have been proposed to be SARS-CoV-2 main protease inhibitors (24-26).

Although observational studies have indicated a potential benefit of lopinavir/ritonavir in the treatment of COVID-19 patients, RECOVERY, SOLIDARITY, and CORIST trials failed to demonstrate the clinical benefit of lopinavir/ritonavir treatment beyond standard care (14-16). Similarly, the darunavir/cobicistat combination was not found to be useful in the treatment of SARS-CoV-2 infected patients. Indeed, the authors mentioned that darunavir/cobicistat therapy was associated with an increased risk of death in two observational cohort studies, probably due to drug-drug interactions (16, 17). However, there is still a lack of randomized controlled trials assessing the effect of darunavir/cobicistat treatment among COVID-19 patients.

Pharmacologically, ACE2 is accepted as the receptor for SARS-CoV-2. Therefore, a compound that blocks ACE2 is expected to prevent SARS-CoV-2 entry into human cells. Our unexpected finding that cobicistat and ritonavir interact with ACE2 with low energy indicates that these molecules may be preventing the entry of SARS-CoV-2 by occupying its receptor. Prashantha et al., showed that both drugs have good affinity toward spike protein (27). Pfizer’s Paxlovid study, a co-packaged combination of nirmatrelvir and ritonavir, has been found to be 89% effective in patients at risk of serious COVID-19 (28). Although the scientific reports are awaited, one of the other main goals of the Paxlovid study is to assess the preventive effect of this combination on the household contacts of SARS-CoV-2 infected patients. According to our study results, ritonavir may contribute to the preventive effect of nirmatrelvir. In literature search, we could not find any clinical studies investigating cobicistat’s preventive effect against SARS-CoV-2 infection.

Our results suggest that both cobicistat and ritonavir may have preventive and therapeutic potential in SARS-CoV-2 infection. However, albeit indirect, the easiest way to determine whether this effect exists or not appears to be a long-term study in PLWH under antiretroviral regimens including these molecules.

Scientific Presentation: The present study was presented during KLİMİK COVID-19 Symposium as an oral presentation in Turkey on September 10-12, 2021.