The Effectiveness of Bundle Applications in the Prevention of Central Line-associated Bloodstream Infections: Nine Years of Observation

Objective: This study aimed to assess the effectiveness of chlorhexidine-impregnated dressing in a bundle of interventions to reduce the rate of central line-associated bloodstream infections (CLABSIs).

Materials and Methods: We performed a bundle of interventions to reduce the CLABSIs from 2012. As one bundle component, we started using the chlorhexidine impregnated catheter dressing. We used a document describing applying central venous catheters for the practicing physicians and nurses, and we organized several educational meetings. An interrupted time-series analysis was performed.

Conclusion: By using bundle form including chlorhexidine impregnated dressing, the rate of CLABSIs decreased significantly. This effect has been observed consistently for nine years, and the clinical pathway use has become the standard care protocol.

Central line-associated bloodstream infections (CLABSIs) are the most common cause of mortality among healthcare-associated infections (HAIs). In the United States of America (USA), one-third of the fatalities among HAIs are caused by CLABSI; as many as 28,000 patients die from CLABSI annually in healthcare facilities (1, 2). Furthermore, the CLABSI rate was reported as 5.3 per 1000 catheter days in the United States (U.S.), whereas it was between 0.1 and 10.8 per 1000 catheter days in Turkey (3). Notably, the patients in intensive care units (ICUs) have an increased risk for CLABSI because 48% of ICU patients have indwelling central venous catheters, accounting for 15 million main line days per year in ICUs of the U.S. (4).

The prevention of CLABSIs could reduce the adverse outcomes, such as the excessive risk of mortality, long-term hospitalization, and medical costs. The CLABSIs were reported among the most costly HAIs at 45,814 USD; moreover, the annual fee of CLABSIs is more than 1 billion USD. In addition, the CLABSI might increase the duration of hospitalization by more than 12 days (5-8).

The Centers for Disease Control and Prevention (CDC) published a guideline for preventing intravascular catheter-related infections in May 2011. That guideline highlighted the significance of hand hygiene and aseptic techniques, maximal sterile barrier precautions during central catheter indwelling procedure, the use of bundles, avoiding the femoral vein, the education of healthcare workers (HCW) to implement central venous catheter (9). We implemented a bundle based on that guideline from the year 2012. The beneficial effects of using chlorhexidine gluconate (CHG) impregnated dressing were reported for reducing the CLABSI rate (10); however, there are controversial reports from real-life experiences (11). Therefore, this study aimed to describe the effect of our interventions, including chlorhexidine on skin preparation and dressing, to permanently decrease the rate of CLABSI.

The study was conducted in a tertiary care hospital in Istanbul with a 300-bed capacity between January 1, 2011, and December 31, 2019. The study population consists of all inpatients, including the ICU and hematology-oncology departments. All the cases with HAIs were classified based on CDC guidelines that were updated at that time and were evaluated by the same infection control team members.

A CLABSI was defined as a laboratory-confirmed bloodstream infection that develops more than 48 hours after a central line placement at the time of the event and is not secondary to another infection site (12-14).

The rate of CLABSI:

We performed interventions to decrease the CLABSI rates based on the CDC guidelines (9, 12, 13). A central venous catheter (CVC) bundle was prepared and applied for all cases in whom CVC was inserted. The bundle includes insertion site, time and type of the catheter, the HCW who implemented the catheter, hand hygiene compliance during the procedure, compliance to the asepsis and anti-sepsis rules, the use of ultrasonography, the implementation and follow up of the dressing material. The dressing material was altered from classical gauze bandage to Tegaderm™ CHG1659 (3M™, Minnesota, U.S.) impregnated dressing (9). If required, the dressing of the catheter insertion site was changed by the HCW. However, if there was no visible problem, the dressing remained until seven days. Additionally, the insertion site for the CVC was suggested to be subclavian or jugular veins in the bundle. We arranged periodic educational meetings about the new bundle steps for healthcare workers. The same CHG product was used throughout the bundle.

Koç University Ethical Committee for Research Studies approved the study with the decision number of 2019.144.IRB1.018.

Interrupted time series analysis for nine years was performed with the unit of time as one year. For test statistics, the R programming language (R Foundation for Statistical Computing) was used. Statistical significance for the slope of the line was set as p<0.05. 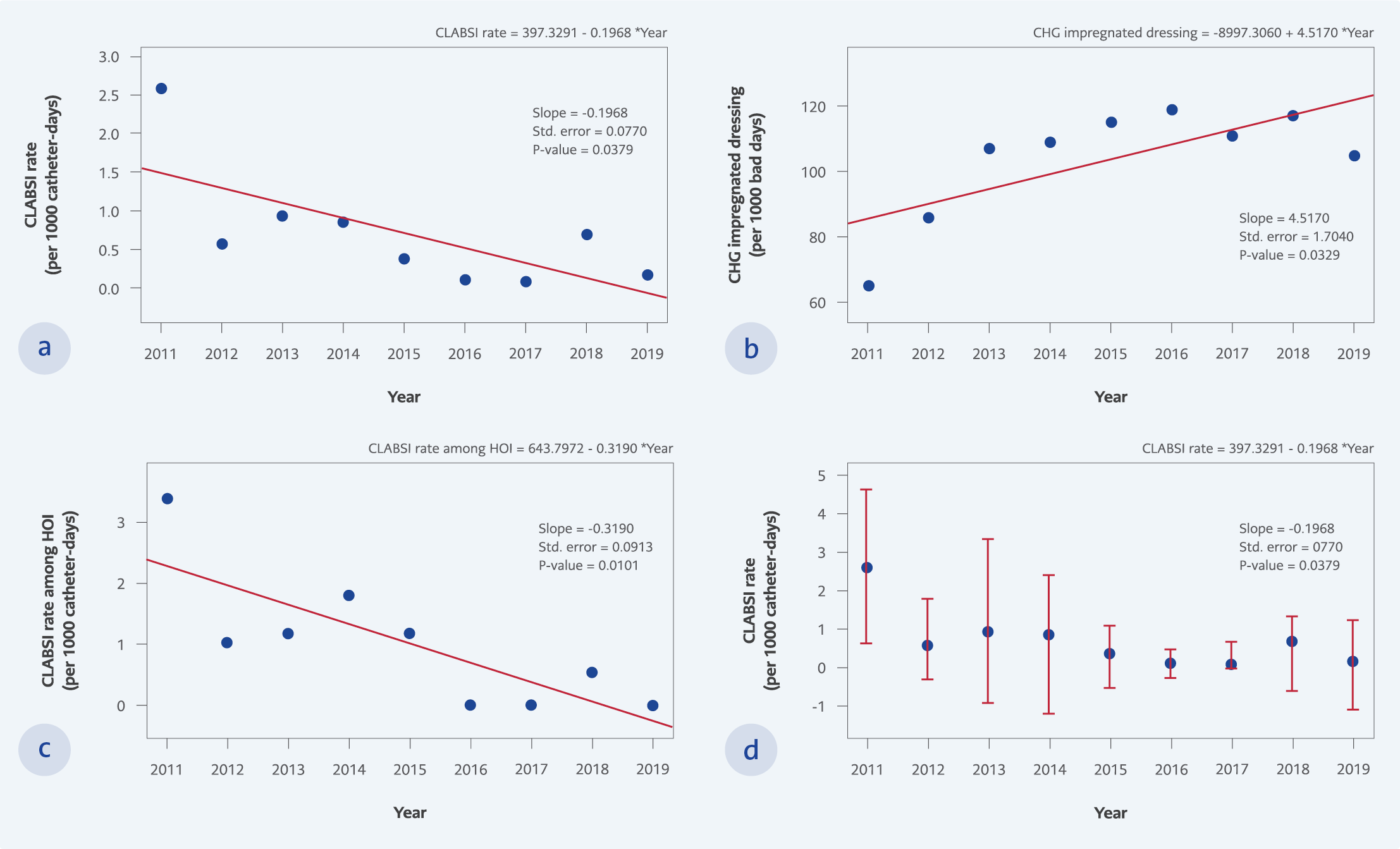 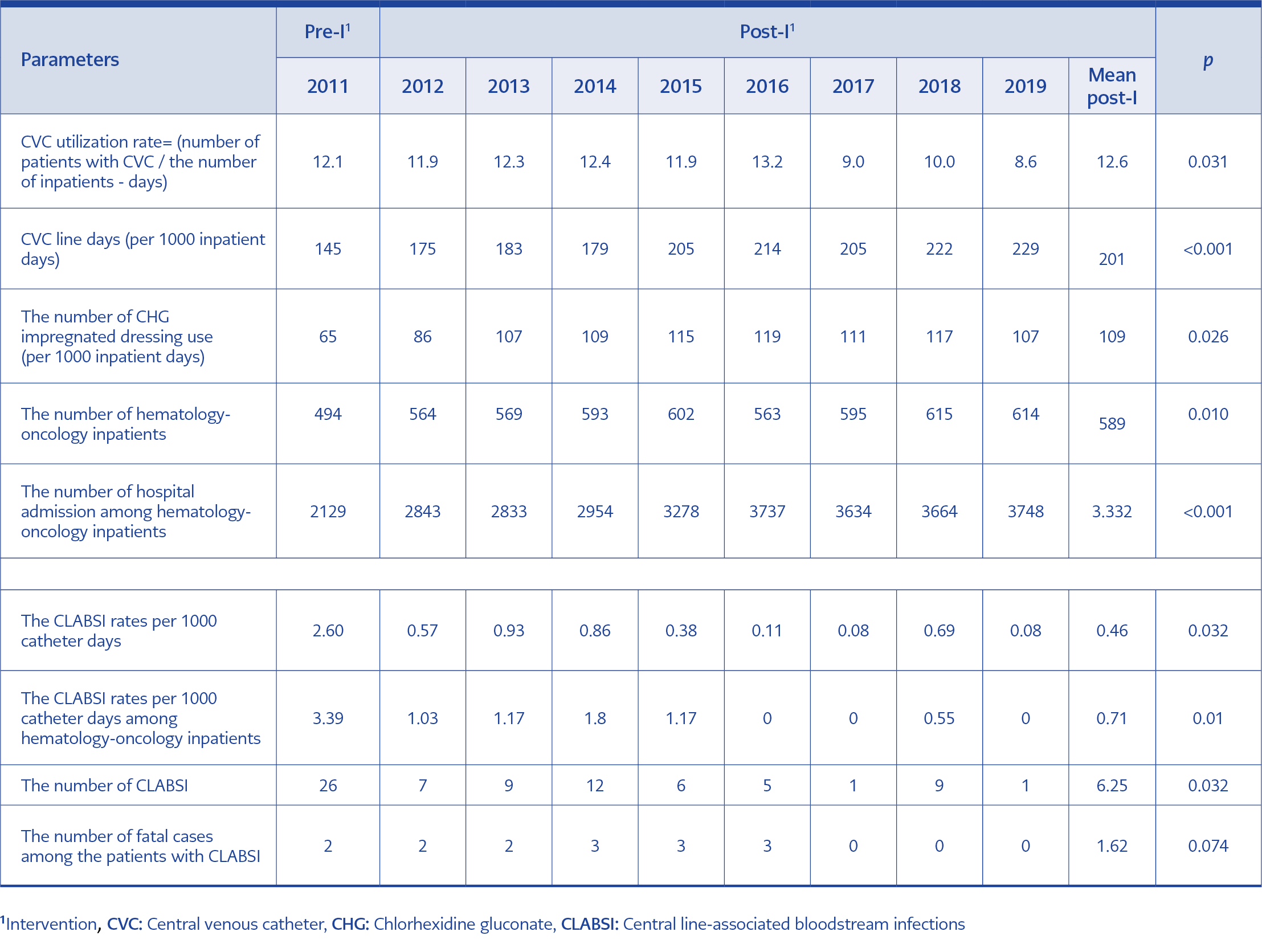 Table 1. Characteristics of the inpatients and the catheter use. 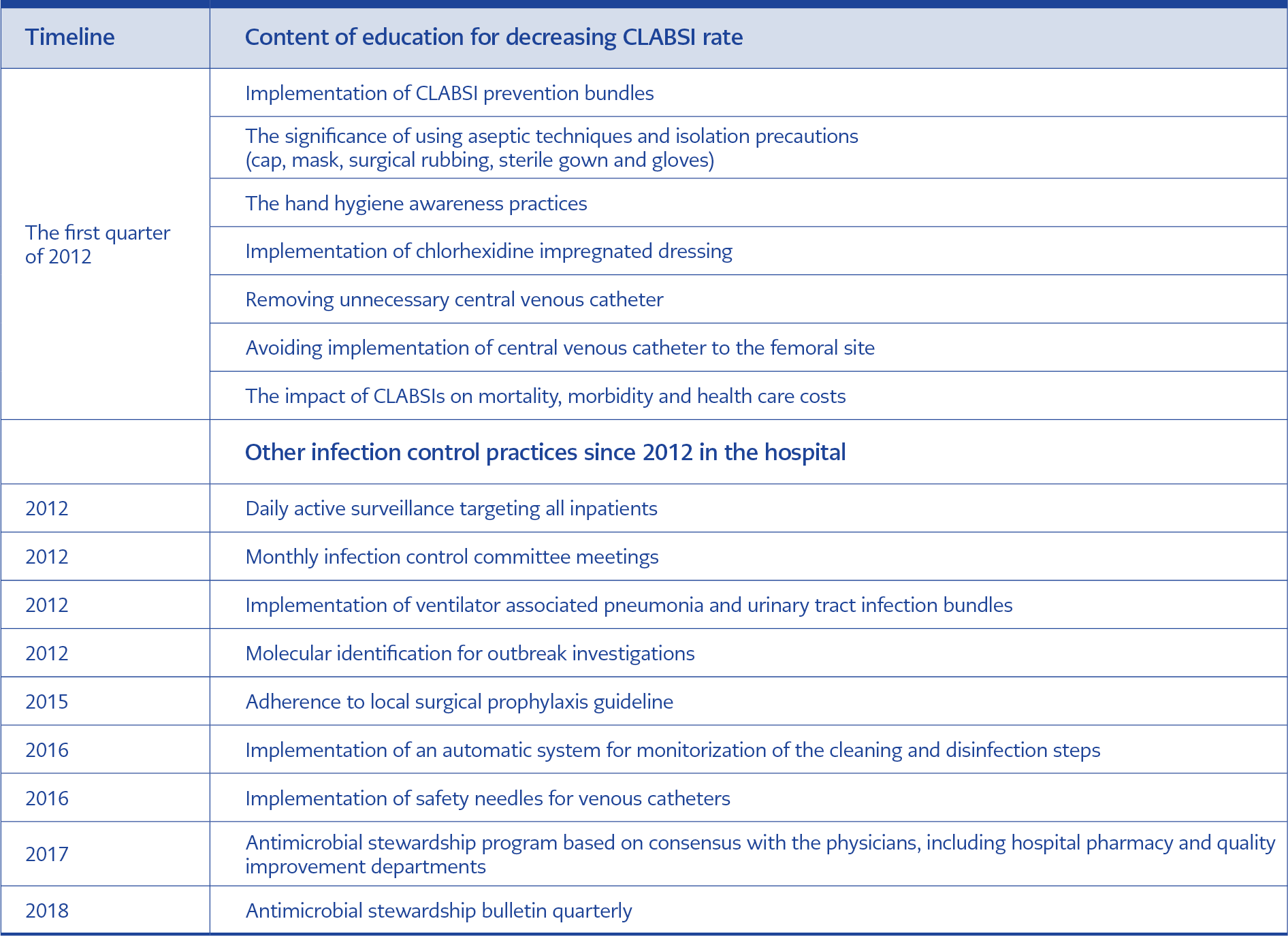 The CLABSI is one of the most critical HAIs with high morbidity, mortality, and healthcare costs.  This study demonstrated the decline in CLABSI rate by using CHG impregnated dressing and implementing a bundle of infection control practices. Despite our hospital’s lower baseline CLABSI rate than other hospitals in Turkey, a lower level of the CLABSI rate was sustained over nine years (Figure 1). The rate of CLABSI per 1000 catheter-days was 2.6 in the pre-intervention period and decreased to 0.46 in the post-intervention period (p=0.032).

In our study, the leading causative agent for CLABSI was Staphylococcus sp. However, 55% of the agents were Gram-negative microorganisms (Table 2). The most common pathogens in CLABSI are Gram-negative bacteria (15) in our region. The increase in the CLABSI caused by multidrug-resistant (MDR) Gram-negative microorganisms led to increased mortality. In a recent study from Turkey, two folds increase in mortality was reported among the patients with CLABSI (15). Therefore, the infection control precautions have a high impact on the prevention of transmission of MDR pathogens. In our study period, the case fatality rate was 0.01 (15/149,023 per 100 cases, Table 1).

The patients from ICU were commonly included in published studies (16-18); however, in our study, besides the ICU, we had the inpatients from hematology-oncology units and pediatrics. The total number of patients and admission to hematology-oncology units increased (p=0.010 and p≤0.001). Accordingly, the rate of CVC use (p=0.031) and CHG impregnated dressing days increased (p=0.026). However, the incidence of CLABSI decreased throughout the study period.

Including a very high number of inpatients and having nine years of study were the most vital points of our study compared to the previous similar reports (17-19). The rate of fulfilling the bundle form was 100%, which shows higher rates of accommodation if compared with the other studies (19). The higher cost of the catheter which might decrease its wide use is one of the main problems for resource-limited countries. The cost-effectiveness studies for the use of CHG in resource-limited countries might be beneficial.

In our hospital, the CLABSI rate was low at the beginning of the study which might be explained by several reasons including general infection control rules, high level of hand hygiene compliance, single-patient rooms, periodic hospital-wide educational activities. Despite the low CLABSI rates at the beginning of the study, the CLABSI continued to decrease during the study period.

Our study has nine years of data with high sample size. Each infection case was followed up very closely by the same dedicated infection control committee members. Besides these strengths, our study has some limitations. The study was conducted in a single facility. Moreover, the lack of standardized CLABSI definition imposed a challenge when comparing CLABSI surveillance data. We used timely CDC guidelines updated at that time. The improvement over time, which could be called maturity bias, could affect the outcome positively.

At the end of nine years of observation, chlorhexidine impregnated dressing as one of the components of a bundle was very useful in preventing CLABSI.

Acknowledgement: We are thankful to all healthcare workers for their effort to participate in the study. Additionally, we are grateful to hospital management for their support.