Adaptation of Acinetobacter baumannii to Colistin Exposure: Laboratory Mimicking of a Clinical Case

Colistin resistance is an emerging threat. Here, we presented the development of colistin resistance in A. baumannii after colistin use on a disease course of a patient. To mimic the effects of colistin in laboratory conditions, three colistin susceptible A.baumannii isolated from the patient were exposed daily to colistin for up to 40 days. The colistin MICs and pmrABC expressions of each generation were studied. After 25 days of colistin treatment, colistin-resistant A. baumannii was isolated from the intra-abdominal fluid of the patient. During the in vitro study, the expressions of pmrCAB reached the highest level at the generation that corresponds to the duration of colistin therapy on the isolation day of the isolate.

The increase of colistin resistance in Acinetobacter baumannii is a great concern in various regions of the world such as Asia, Europe, and North and South America (1). Exposure to colistin is considered the most significant factor for emerging of colistin resistance (2); however, details of the in vivo response of A. baumannii to colistin exposure, such as the number of days for the development of resistance was not described. The molecular studies about colistin resistance indicated two main mechanisms: modifications in lipid A structure and complete loss of LPS (3). In this study, we analyzed the adaptation of A. baumannii to colistin use on a disease course of a patient. The cellular effects of colistin use were mimicked in laboratory conditions to understand the relationship between the clinical features and molecular resistance mechanisms.

A 45-year-old woman had a stab wound caused by a sharp object penetration of the abdominal and thoracic walls. Two days after abdominal and thoracic surgery in another hospital, she was transferred to our intensive care unit (ICU). On the third day of hospitalization, her body temperature was elevated, and her white blood cell count was 27,280 /µL, C-reactive protein was 356.9 mg/L and procalcitonin was 0.86 ng/mL. Carbapenem-resistant A. baumannii (CarR-AB) was isolated from the cultures of sputum and abdominal drainage on the fifth day. Colistin 300 mg/day and meropenem three g/day were started, but clinical and laboratory responses were poor. On the 15th day of hospital stay, CarR-AB was isolated again from abdominal drainage. Meropenem was switched to tigecycline 100 mg/day, and colistin was maintained. On the 29th day, antibiotic treatment was stopped based on clinical and laboratory findings. On the 38th day, colistin-resistant A. baumannii was isolated from the abdominal drainage. A. baumannii was only susceptible to tigecycline and amikacin. Colistin 300 mg/day and tigecycline 100 mg/day were started, however, colistin was switched to amikacin in the 48th day because of the generalized itching that does not respond to anti-histaminic treatment. During the therapy with amikacin and tigecycline, she had generalized tonic-clonic seizures probably associated with amikacin on the 50th day. She had no fever, her white blood cell count was 12,420 /µL, C-reactive protein was 30.4 mg/L and procalcitonin was 0.24 ng/mL on the seizure day, and antimicrobial treatment was stopped. In the following days, she had no fever, and she was discharged on the 72nd day of hospitalization. At year 1 of follow-up, the patient was completely free of symptoms. At year 2 of follow-up, she was completely well, and follow-up laboratory tests were within normal limits.

Four colistin susceptible A. baumannii from sputum (K399, K411) and intra-abdominal fluid (IAF) (K408, K412) were isolated. After 25 days of colistin use, a colistin-resistant A. baumannii (K409) was isolated from IAF. The clonal relatedness of the isolates was determined by the repetitive PCR (rep-PCR) based 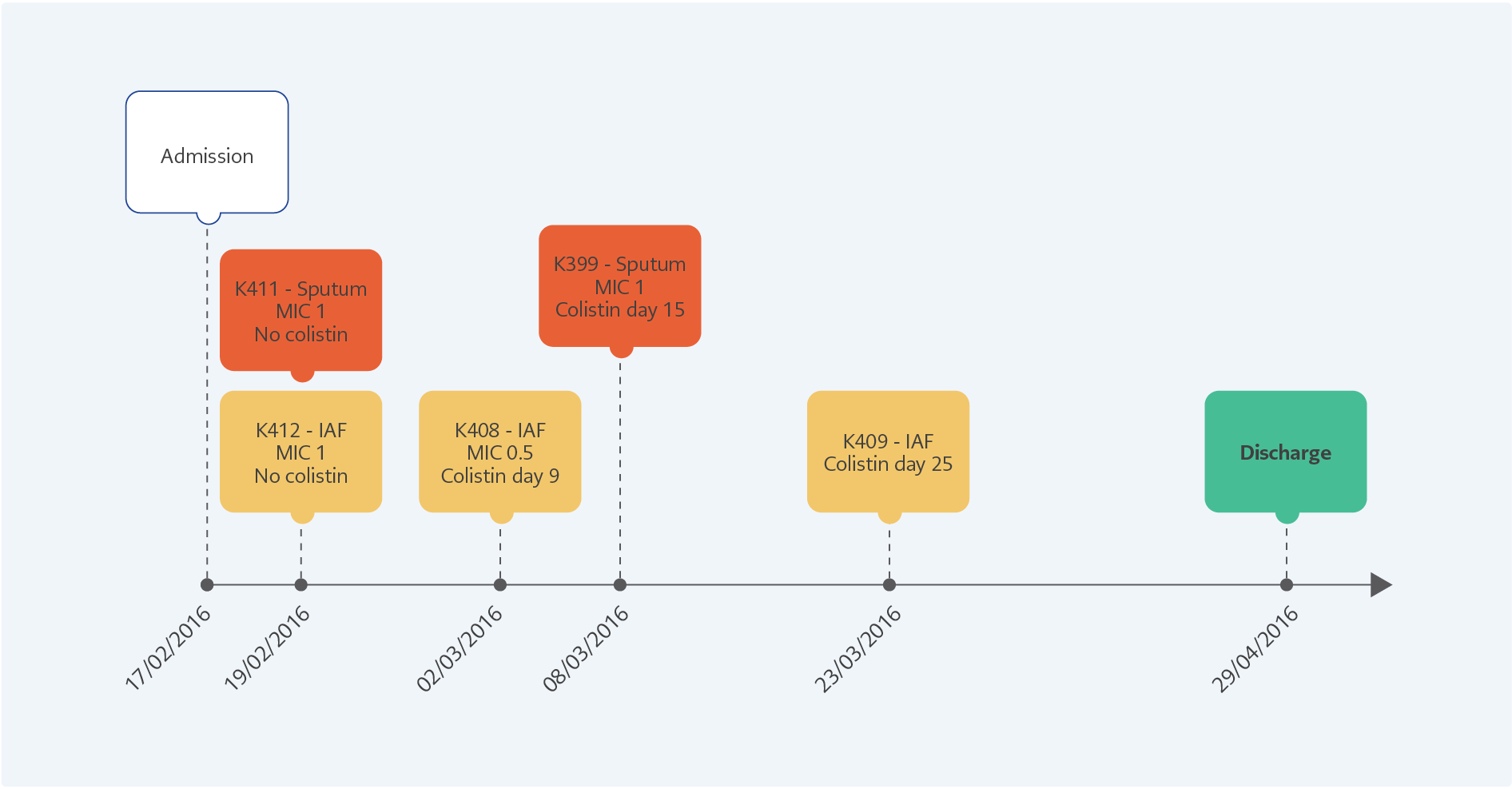 Figure 1. The clinical progression of the patient from admission to discharge of the hospital. The K411 and K412 were isolated before colistin treatment, K408 and K399 were at the 9th and 15th days of the therapy. The colistin-resistant K409 was isolated five days after stopping 25 days of colistin therapy. 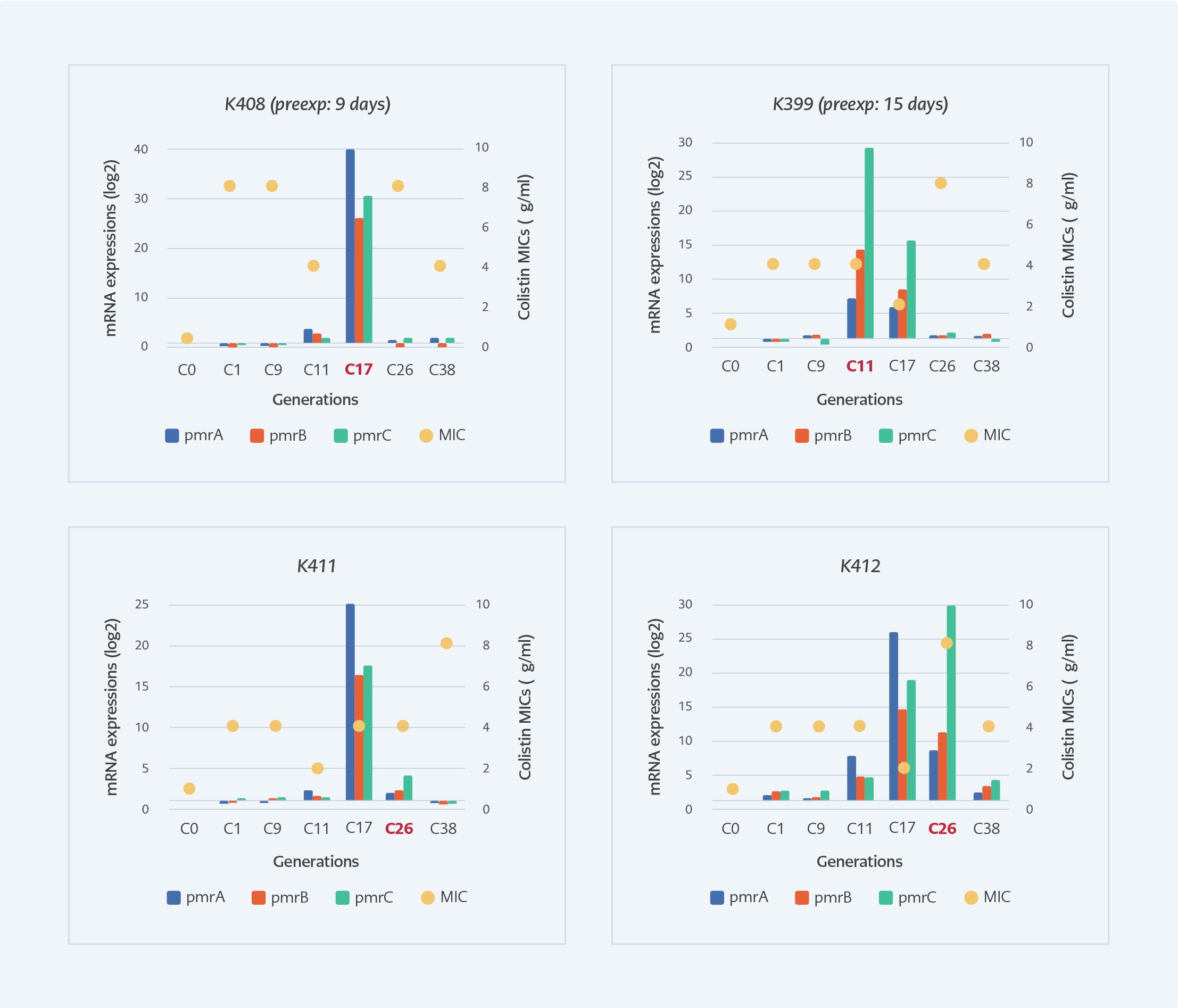 The clinical progression of the patient is shown in Figure 1. After initiating the colistin therapy, two susceptible isolates (K399 and K408) were detected on the 9th and 15th days. The colistin-resistant A. baumannii (K409) was isolated after 25 days of therapy. All the isolates were clonally related with >95% similarity and positive for blaOXA-23. No mcr-1 was detected. In the colistin-resistant isolate (K409), multiple insertions were found in different regions of pmrA, pmrB, pmrC, lpxA, lpxC, and lpxD genes. The pmrA, pmrB, and pmrC genes were also found to be 1.6, 1.74 and 1.72-fold overexpressed compared to the susceptible K408, respectively.