We describe a case of recurrent transient perivascular inflammation of the carotid artery (TIPIC) syndrome and associated supraclavicular lymphadenopathy after ipsilateral intramuscular administration of an mRNA-based COVID-19 vaccine.

Transient perivascular inflammation of the carotid artery (TIPIC) syndrome is a rare disease. Recently, characteristic imaging findings were classified (1). The most common appearance is the existence of focal eccentric thickening of the carotid wall and abnormal soft tissue surrounding the carotid artery, especially near the bifurcation and usually without any hemodynamic alterations (1, 2). The etiology of the syndrome is not clear yet. TIPIC syndrome due to chemotherapy, Burkitt’s lymphoma, high-altitude traveling, fluoxetine use, heralding the onset of acute leukemia, and following flu-like illness has been reported (3-8). Recently it has been recognized among the complications of COVID-19 (9-11).

Monitoring adverse reactions following immunization is essential, particularly for novel vaccines such as those against COVID-19. We describe a case of recurrent TIPIC syndrome and supraclavicular lymphadenopathy following the ipsilateral mRNA-based COVID-19 vaccine. 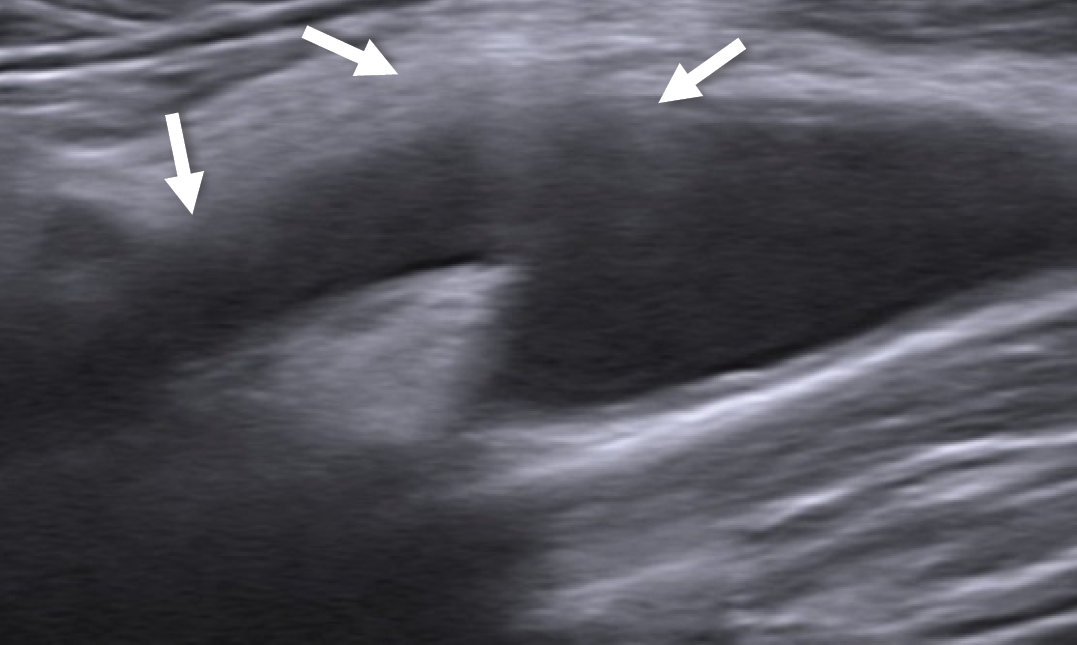 Figure 1. Sonography image shows focal eccentric thickening of the carotid wall and increased echogenicity of perivascular fat tissue (the area in between the arrows) at the site of tenderness (left common carotid artery bulb and proximal external carotid artery). 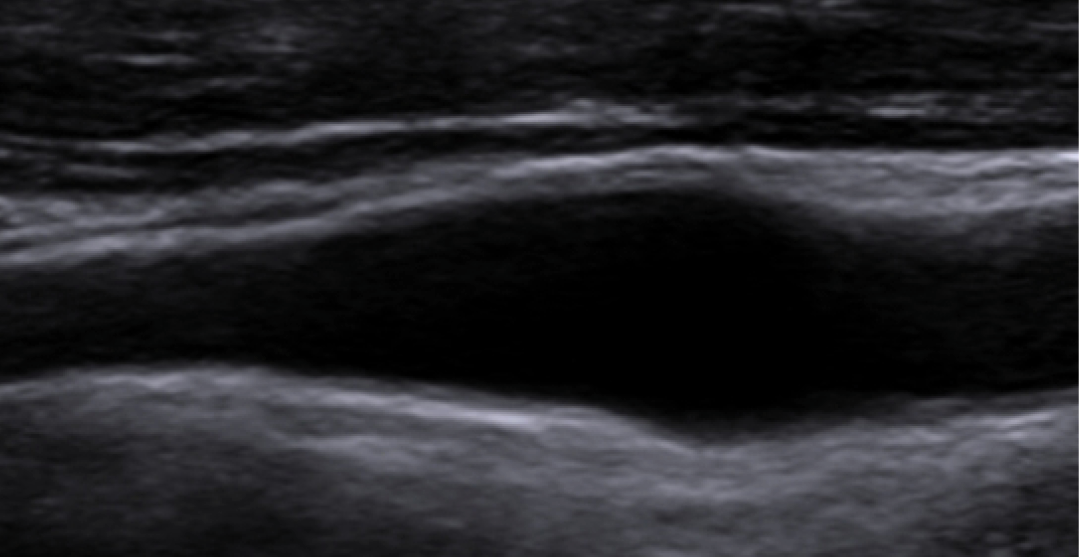 A 39-year-old man with left-sided neck pain, who was exacerbated by head movements and swallowing for the last 20 days, presented to our outpatient otorhinolaryngology (ear, nose, and throat [ENT]) department. The patient had a history of mRNA-based Pfizer-BioNTech COVID-19 (BNT162b2) vaccine administered in the left arm one week before the onset of pain. The patient was referred to our radiology department for sonography. Sonography examination was performed with Sonoline Antares S2000 (Siemens Medical Solutions, Erlangen, Germany) system using 13-5 MHz and 9MHz high-resolution linear transducers. Sonography revealed focal eccentric thickening of the carotid wall (adventitial thickening) at the bulbous and proximal internal and external carotid arteries and increased echogenicity of perivascular fat tissue (Figure 1). No hemodynamic alterations or narrowing of the carotid artery lumen was seen. No cervical lymphadenopathy was detected. Three lymph nodes, which were oval-shaped with preserved fatty hilus and asymmetric cortical thickening, were noted in the left supraclavicular region. The largest lymph node measured 9.1×4.7 mm in size, and the widest cortex thickness was 3.3 mm (Figure 2). The patient was given non-steroidal anti-inflammatory drugs (NSAIDs) (dexketoprofen 50 mg per day for five days) and his symptoms resolved gradually in 10 days. Two months later, he had his second dose of mRNA vaccine, and he had a recurrence of his symptoms. He used the NSAIDs prescribed in the previous episode, and his symptoms resolved gradually in about two weeks. We performed a control sonography examination 1.5 months after the second episode and complete resolution of the focal eccentric thickening of the carotid wall was confirmed (Figure 3). The supraclavicular lymph nodes were smaller in size and also cortex thickness had decreased. Informed consent for publication of this case was obtained from the patient.

We reported a patient presenting with recurrent acute neck pain and reversible structural changes of the carotid artery wall demonstrated on imaging following the mRNA COVID-19 vaccine. Also, left supraclavicular reactive lymph nodes were detected. TIPIC syndrome is a condition characterized by unilateral or bilateral neck pain with tenderness over or near the carotid artery that is exacerbated by head movements, swallowing, coughing, and sneezing. TIPIC syndrome cases preceded by flu-like illness and recent viral episodes have been reported (1). Also, three cases of TIPIC syndrome following COVID-19 infection were reported (9-11). SARS-CoV2 can promote endothelial cell infection and inflammation. The carotid body could be a site of virus invasion due to the local expression of angiotensin-converting enzyme receptors (12), and TIPIC syndrome can be considered among the spectrum of intra and perivascular inflammatory thrombotic events due to COVID-19. Our case is in agreement with the four major criteria of TIPIC syndrome suggested by Lecler et al. (1):

1) The presence of acute pain overlying the carotid artery, which may or may not radiate to the head,

3) Exclusion of another vascular or non-vascular diagnosis with imaging,

4) Improvement within 14 days, either spontaneously or with anti-inflammatory treatment.

The estimated prevalence of TIPIC syndrome was reported as 2.8% among patients with acute neck pain. Nevertheless, this syndrome is mostly a diagnosis of exclusion and is probably underestimated because the symptoms are relatively minor and rapidly improve. Color Doppler sonography has an advantage as a first-line imaging modality in detecting the periadventitial inflammatory changes in TIPIC syndrome because the exact region of tenderness can be investigated during the examination; nevertheless, the sonographer should be fully aware of the findings for this syndrome in order to detect the subtle perivascular changes (13). In addition, follow-up is very valuable for revealing the reversibility of the observed changes.

During the COVID-19 pandemic, the Food and Drug Administration (FDA) approved multiple vaccinations to combat the outbreak. Lymphadenopathies corresponding with inflammation-inducing vaccinations have been previously cited in the literature and are uncommon but potential side effects. There is a report supporting significant unilateral cervical and supraclavicular lymphadenopathy following human papilloma virus vaccination. Furthermore, it has been reported that Bacille Calmette–Guerin lymphadenitis is the most common complication of the tuberculosis vaccine. Post-anti-COVID-19 vaccine lymphadenopathy is not an unusual event, and supraclavicular, infraclavicular, and more frequently axillary lymph nodes -consistent with lymphatic nodal levels draining the skin of the upper arm- have been reported ipsilateral to the injection site (14-16). Painful and non-painful lymphadenopathies have been reported and ultrasound findings differed between these two. Non-painful lymph nodes were reported to be enlarged with preservation of normal architecture and blood flow, as in our case. Reported painful lymphadenopathies were associated with loss of normal node anatomical landmarks, liquification, and avascularity consistent with node necrosis (16).

Generally, it is standard practice to biopsy true supraclavicular nodes in the absence of known infectious causes. However, the recent COVID vaccination is an indication of watchful waiting for enlarged supraclavicular lymph nodes.

We presented supraclavicular lymphadenopathy and recurrent TIPIC syndrome following the ipsilateral mRNA COVID vaccine. Radiologists and clinicians should be aware of these entities to allow a prompt diagnosis, accelerate the clinical management and treatment process, avoid unnecessary interventional procedures, and establish a follow-up protocol.