The Impact of SARS-CoV-2 Variants on Morbidity, Mortality and Effectiveness of Vaccines

Coronaviruses are known to evolve slower than the other RNA viruses; however, SARS-CoV-2 underwent a major shift through D614G change in February 2020, even before the declaration of a pandemic by WHO and D614G variant became rapidly dominant throughout the world.  The spike protein of this variant with D614G change have a higher affinity to human ACE-2 and gained a transmission advantage against other circulating variants. Some mutations may confer advantages for the virus, and the variants carrying this kind of mutations may outcompete the previous variants (1).  A mutation may cause changes in biology, transmissibility, susceptibility of the virus against naturally or vaccine-induced immunity, and the presentation and outcome of the disease caused by the virus. All of these changes may pose extra challenges regarding the containment of the epidemic, treatment and prevention of the disease using antivirals, immunotherapeutics like monoclonal antibodies or convalescent plasma, and vaccines (2,3).

Towards the end of 2020, amid the second peak of the COVID, several new variants emerged within a short period. A variant that was detected first in September 2020 caused a surge in the number of COVID-19 cases in December despite an ongoing lockdown in South England and spread rapidly to the whole country and Ireland (4). A second variant was reported from South Africa, passing through the second peak despite the summer season (5). The third variant was reported from the Amazonas State of Brasil, suffering from a severe second peak of COVID-19 (6). All of these countries had been hit hard during the first peak. Waning immunity from the first peak increased the number of cases, and prolonged infections in immunocompromised persons may have contributed to the emergence of variants. All of these three variants had accumulated mutations more than expected. These variants shared some mutations in common that suggest a convergent evolution driven by immune selective pressure. Although all of these variants spread rapidly to the other countries, the variant from England spread much more rapidly and became the dominant variant in continental Europe and other parts of the world.  The variants from South Africa and Brazil failed to gain predominance in those countries that they were introduced to. The epidemiologic and clinical data indicate that, in varying degrees, all variants had gained higher transmissibility, capability to escape from previous immunity, and they are associated with higher hospitalisation need and mortality rates within 28 days (7,8). The devastating impacts of these variants on the course and control of the pandemic caused a big concern and prompted the initiation and strengthening of genomic surveillance and screening efforts for variants, especially in developed countries. These efforts and a high level of alertness led to identifying new variants in different parts of the world, fortunately still limited to certain geographic regions. Whereas the variants considered dangerous have been described as variants of concerns (VOCs), other variants have been considered less dangerous as variants of interest (VOIs)(Table 1 & 2). Many organisations and national/international institutions (such as WHO, ECDC, CDC) released guidelines and recommendations to limit the spread of the variants and prevent or avoid the unfavourable effects (9-11). 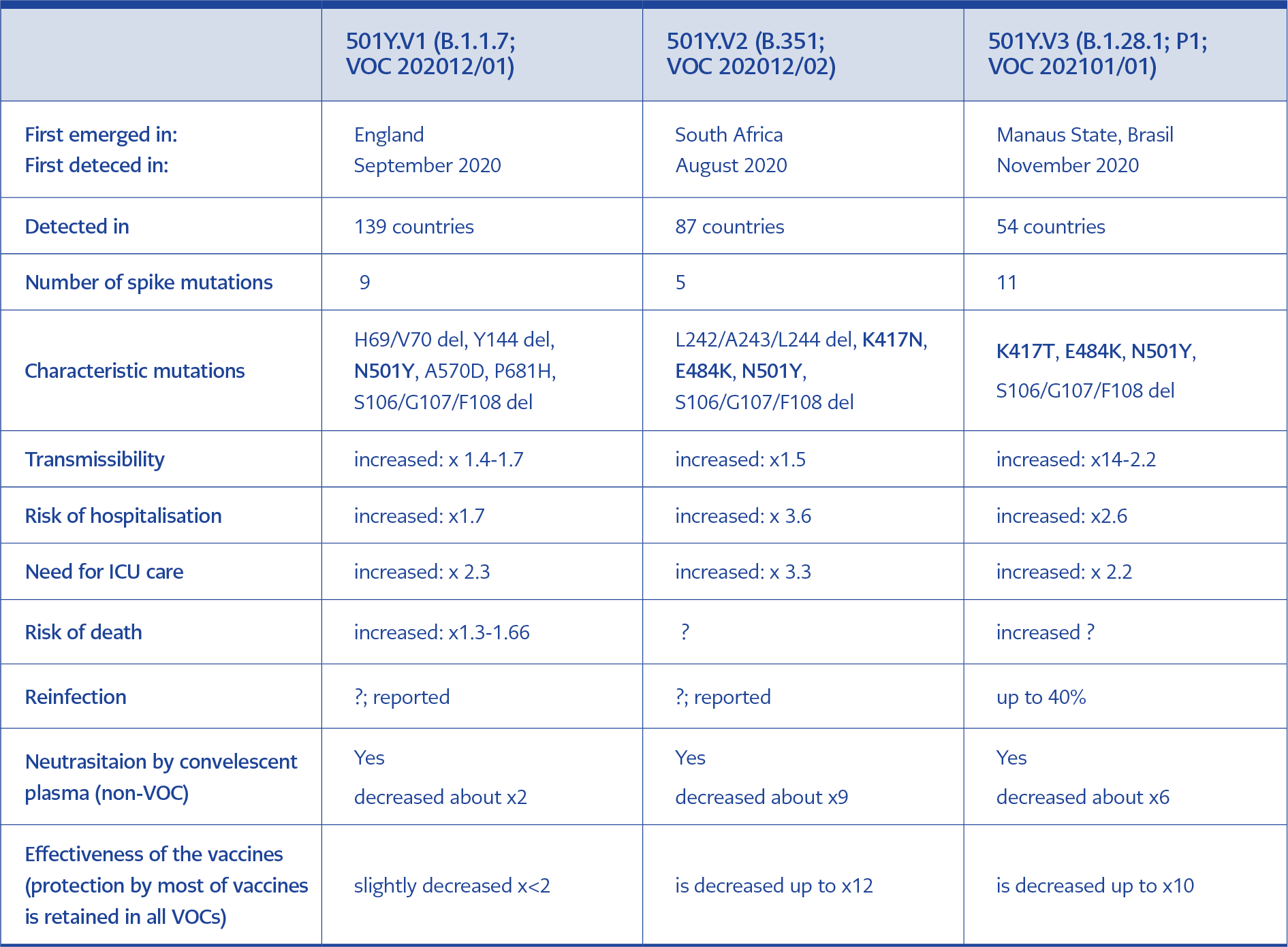 The emergence of the variants superimposed with the initiation of vaccination in several countries. The potential of the variants to evade immunity acquired through previous infection and vaccination is another subject of concern and is still being investigated extensively. Laboratory investigations indicate that some mutations in the S gene of the virus are associated with a decline in the effectiveness of antibodies elicited by previous variants and vaccines with an early use authorisation, which can put the efficacy of the vaccines at risk. Although the results have shown the mutations in the receptor-binding domain (RBD) of S protein like E484K change shared by some VOCs and VUIs confers resistance against neutralising activity of antibodies, fortunately, despite the resistance, vaccines are still effective against current circulating VOCs and VUIs. Also, real-life data support the effectiveness of at least mRNA vaccines against circulating variants (12-14).

Broad vaccination in the shortest period is still considered the most effective way to mitigate the pandemic and stop the emergence of new variants. However, there are still many unknowns about the protective level of neutralising antibodies, risk of reinfection, duration of the immunity induced either by natural infection or vaccination, the role of T-cell responses and memory cells in the effectiveness of protection. Another subject of concern is the potential of the emergence of more resistant, more transmissible, more virulent variants, and the protective immunity conferred by vaccines may be lost with the waning immunity or suboptimal immune responses. To counteract these risk, redesign or tweaking of current vaccines are being considered. Another alternative is to develop pan-coronavirus vaccines that should elicit antibodies against more conserved regions instead of the RBD region, which is much more prone to immune selective pressure. In the near future, in addition to vaccination programs, efforts to decrease the number of infections and to conduct effective, comprehensive genomic surveillance and screening for variants should be prioritised (14-20).