We described clinical course and outcome of a patient with Listeria monocytogenes meningitis and rhombencephalitis (RE). A 65-year-old woman with past medical history of chemotherapy and radiotherapy for cervical cancer applied to emergency room with the history of fever and headache for three days. Clinical course indicating meningitis evolved to RE over time. We present this case because of the significance of early diagnosis and adequate antimicrobial therapy targeted to the pathogen. At the end, we suggested an algorithm for the case management.

Early recognition of rhombencephalitis is important.

Administration of adequate antimicrobial therapy is crucial in management of patients with central nervous system listeriosis.

Listeriosis is a primarily foodborne but preventable disease caused by Listeria monocytogenes, a gram positive, facultative anaerobic and non-spore forming bacillus that is ubiquitous in soil and water (1). L. monocytogenes was isolated and described in laboratory pigs and rabbits by Murray for the first time in 1929 (2). Especially since 1980s, L. monocytogenes has been recognized due to devastating widespread foodborne outbreaks and invasive life threatening diseases in immunocompromised patients (3). L. monocytogenes is mainly transmitted via contaminated food such as poultry, dairy products, fresh soft cheese, processed meat and raw vegetables (4, 5).

Listeriosis is acknowledged as the third fatal foodborne infection with 19% mortality rate (6). Furthermore, L. monocytogenes meningitis is the third most common bacterial meningitis (5-10%) with a mortality rate up to 50% and a neurologic sequel rate of 60% despite of the antibiotic treatment (5).

L. monocytogenes is known as the most common infectious causative agent of RE (7). The term RE refers to an inflammatory disease affecting the hindbrain (brainstem and cerebellum). The RE has a wide variety of etiologies with some of them potentially severe and life threatening without a proper early treatment (7). The overall mortality rate of

L. monocytogenes RE is as high as 51%, whereas all untreated cases end up with death. The success rate of L. monocytogenes RE can reach up to 70% with appropriate early treatment (8). Therefore, considering possibility and starting empiric treatment for L. monocytogenes that is the most treatable etiologic factor for RE is highly fundamental. By this report, we present the case of invasive L. monocytogenes meningitis that latterly progressed to RE in immunocompromised patient. We updated clinical features, diagnosis and treatment options of this rare disease. 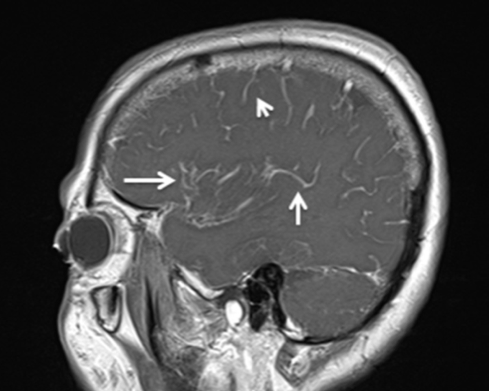 A 65-year-old woman with inoperable cervical carcinoma was admitted to the Emergency Department of American Hospital, İstanbul, Turkey on July 20th 2015 with three days history of headache and fever. She recently received chemotherapy and radiotherapy. At the time of admission, there was no pathological neurological physical finding. The patient was hospitalized because of the patient’s risk factors associated with her past medical history. One day later, positive Brudzinski and Kernig signs and absence of verbal response were observed in patient’s neurologic exam. Cranial Magnetic Resonance Imaging (MRI) demonstrated leptomeningeal enhancement which was indicating meningitis (Figure 1).

Based on blood and CSF test results, meningitis was considered as an initial diagnosis. Treatment with meropenem 6g q 24 h was started and later vancomycin 1g IV q 12h was added. The patient’s general condition had worsened with persistent fever despite of the therapy. Repeated cranial MRI revealed advanced leptomeningeal enhancement compared with the previous one. In neurologic exam, muscle strength was 3 out of 5. Bilateral positive Babinski sign (bilateral extension) and nuchal rigidity were present in physical examination. Pronator drift (Barre’s sign) and lower extremity weakness were prominent. Ophtalmoscopic exam revealed deficits in lateral eye movements and diplopia in left direction. Blurring of optic margins indicating papilledema was detected. The patient was monitorized and treated in Intensive Care Unit (ICU) due to severity of her clinical course and prominent neurological signs. 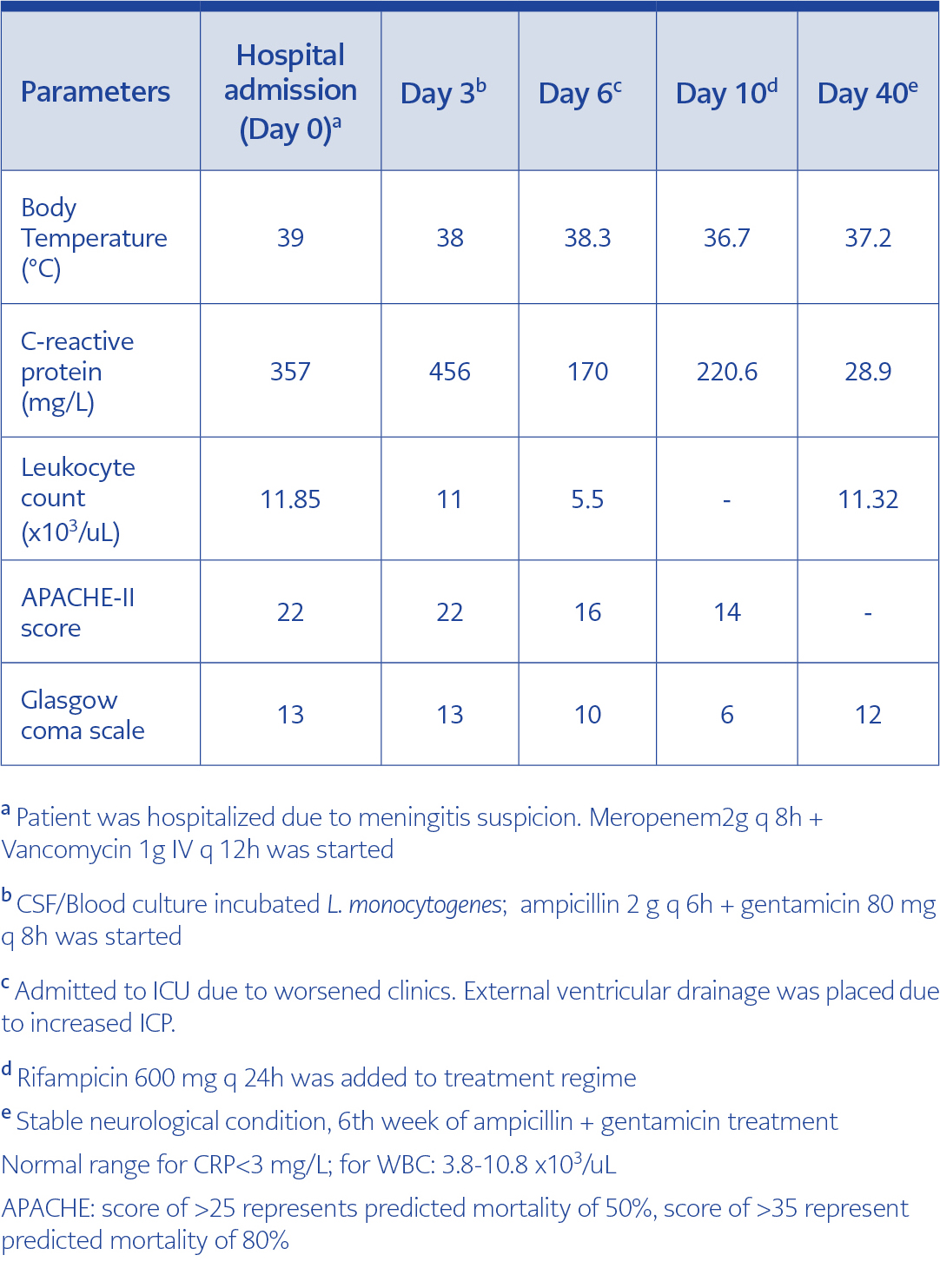 Table 1. Clinical parameters on the day of hospital admission and during follow-up

Patient’s treatment of ampicillin and gentamicin combination was continued under close monitorization. However, her clinical condition had worsened with 0-1/5 muscle strength, quadriparesis, oculomotor and abducens nerve palsies, GCS of 3 and APACHE-II of 21 scores. Because of severe neurological deficits and brain edema, mannitol treatment was started. Rifampicin 600 mg q 24h was added to antibiotic regimen on the 10th day of antibiotic therapy to reduce risk for treatment failure. The patient was given ampicillin 2g q 6h and gentamicin 80mg q 8h for 6 weeks.

Epidemiological studies indicate an increasing trend in incidence rates predominantly in Europe. Inadequate pasteurization technique, centralized food processing causing widespread consumption of contaminated products especially ready to eat meat or dairy products and reduced salt content in food have been attributed to this increase (4). According to 2013 Centers for Disease Control and Prevention (CDC) reports, incidence of listeriosis cases in USA was 0.26 per 100.000 individuals with total 1600 cases and 260 deaths (9).

In our case, patient had multiple risk factors for immunosupression including age, solid cervical carcinoma and immunosuppressive treatment history, absence of trimethoprim/sulfamethoxazole (TMP/SMX) prophylaxis and use of proton pump inhibitor (PPI) similar to previous studies (10). There was pertinent history of soft cheese consumption which was accepted as high-risk food for listeriosis.

L. monocytogenes is the only one among Listeria species that causes to recurrent infections in humans. L. monocytogenes is rod-shaped, Gram positive, intracellular, facultative anaerobic bacillus. It is motile by its flagella at 15-30 °C but not at 37°C. It has properties of catalase positive and oxidase negative. When grown on sheep blood agar, it is weakly β- hemolytic owing to presence of β-hemolysin (4). L. monocytogenes can replicate in wide spectrum of temperature ranging with 1 to 45 °C and under high salt concentrations and refrigerator conditions leading to devastating food borne outbreaks (4).

Incubation period ranges from 18-20 hours (for gastroenteritis) to 1-4 weeks (for invasive diseases), which makes diagnosis difficult (4). Clinical presentation of L. monocytogenes has wide spectrum ranging from influenza-like mild illness, mild gastroenteritis to rhombencephalitis, meningitis and sepsis to death. For this reason, it is also described as “a disease of bimodal severity”. In normal healthy population, L. monocytogenes is attributed to 1% of febrile gastroenteritis cases with symptoms of watery diarrhea, fever, nausea, headache, myalgias and arthralgias. It is usually self-limited with 2-day course and resolves with complete recovery (4).

Life-threatening CNS infections including meningitis, meningoencephalitis, and rhombencephalitis are observed among predisposed population. L. monocytogenes meningitis is accepted as the third most common cause of meningitis. Main clinical features are headache, fever, nuchal rigidity, seizures, tremor, ataxia and altered mental status. During its course, symptoms can progress to cranial nerve palsies, hemiparesis, coma and death most resulting from a complication of increased intracranial pressure (12).

L. monocytogenes is diagnosed by a cerebrospinal fluid or blood culture of organism that is analyzed based on morphologic, motility and hemolytic properties of pathogen. It is widely accepted as a gold standard (15). Positive CSF examination reveals pleocytosis, elevated protein levels and low glucose levels (4). At the same time, there can be no or mild abnormalities in CSF findings in

L. monocytogenes RE making diagnosis more difficult. Therefore, CSF findings and cultures cannot be used as exclusion criteria for L. monocytogenes RE (14). In our case, the blood and CSF analyses of the patient were similar to previous listeriosis reports (10). It is important to emphasize that antibodies based Enzyme Linked Immunosorbent Assay (ELISA) test and molecular Polymerase Chain Reaction (PCR) test provide more rapid results with equal sensitivity.

From radiological perspective, MRI with contrast is preferred for patients with suspicion of

From treatment perspective, empirical vancomycin combined with cefotaxime or ceftriaxone therapy should be started on the basis of classic clinical presentation of CNS infection, MRI findings of leptomeningeal enhancement, later CSF blood analysis findings (pleocytosis, high protein content) and Gram positive CSF staining (10, 12). Furthermore, under presence of risk factors addition of ampicillin with or without aminoglycoside combination should be considered. Ampicillin addition is essential since vancomycin and cephalosporin have no or low activity against L. monocytogenes. For patients unable to take β-lactam, TMP/SMX should be preferred. 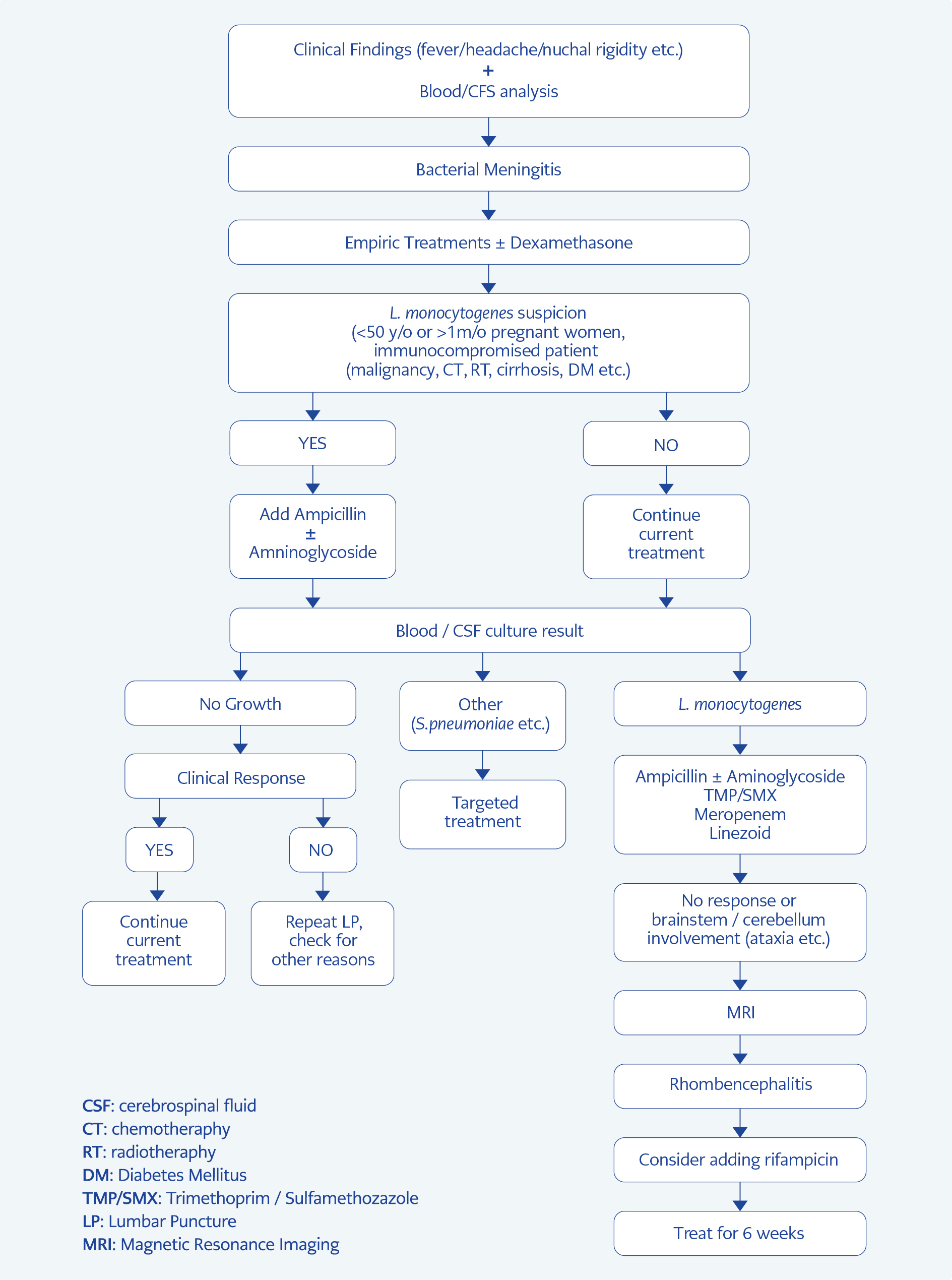 In the management of L. monocytogenes CNS infections, treatment choice is generally ampicillin in combination with aminoglycosides preferably gentamicin. Other second-line alternative drugs are TMP/SMX, fluoroquinolones and meropenem (16). Thonnings et al. (17) revealed that ampicillin and gentamicin combination is more effective and has lower mortality rate compared with meropenem treatment. Further, rifampin has considerable bacteriostatic activity against L. monocytogenes and more penetrance to blood brain barrier compared with aminoglycosides. To prevent emergence of resistance, use of rifampin combination with ampicillin should be considered. Study results support to continue at least 3 weeks for L. monocytogenes meningitis and longer nearly 4-6 weeks for more invasive CNS like RE and abscess (16). We summarized our recommendations in Figure 3.

Another fundamental aspect to discuss for L. monocytogenes CNS infection is the development of obstructive hydrocephalus leading to seizures as observed in our case. When blood sodium level was analyzed, hyponatremia was observed. Hyponatremia can be associated with inappropriate Antidiuretic Hormone secretion usually seen in CNS infection or edema cases. Increased ICP can be a probable cause of higher neurological sequel and mortality rate in L. monocytogenes CNS infections. Meticulous observation of blood sodium levels and signs of increased ICP is extremely crucial.

Although, some of previous studies pointed out an advantage of corticosteroid (dexamethasone) administration as a prophylaxis before starting antibiotic treatment, there is a discordance and no sufficient evidence for L. monocytogenes meningitis cases (16). Presently, prophylactic dexamethasone has been recommended only for suspected S. pneumoniae meningitis cases. In addition, since most CNS listeriosis occurs among immunocompromised patients, use of additional immunosuppressive steroid therapy should be investigated more deeply.

Seizures may also lead to increased mortality and morbidity rates. Therefore, prophylactic anticonvulsant use also should be studied in more detail (18).

In conclusion, early recognition of clinical findings of CNS infections, performing rapid diagnostic methods, and an administration of adequate antimicrobial therapy can be defined as cornerstones in management of patients with CNS listeriosis. Close follow-up of patient’s condition, repeating MRI in the case of no improvement or clinical deterioration and managing complications are fundamental. Due to possible brainstem involvement leading to respiratory failure risk, patient’s respiratory function should be closely followed up and adequate ventilation should be provided to patients.

Informed Consent: Written informed consent was obtained from the patient who participated in this study.