The possibility of encountering multi-drug resistant Gram-negative bacteria is higher in nosocomial meningitis. These bacteria are clinically important because of their higher mortality rate, and colistin is almost the only treatment option in resistant strains. However, intrathecal administration of colistin can result in chemical meningitis. We reported a case with chemical meningitis during the intravenous sulbactam plus colistin and intrathecal colistin therapy for multi-drug resistant Acinetobacter baumannii meningitis. Cerebrospinal fluid findings of the patient improved after discontinuation of intrathecal colistin therapy. This reversible complication may occur during intrathecal therapy. Discontinuation of intrathecal therapy or reducing the antibiotic dose will be the most appropriate approach to manage such cases.

Acinetobacter baumannii has been one of the prominent causative agents of nosocomial meningitis compared with the other Gram-positive bacteria in recent years. These bacteria are clinically important because of their higher mortality rate, and colistin is almost the only treatment option in resistant strains (1, 2). Intrathecal (IT) colistin therapy has been found to be safe and effective in meningitis against multi-drug resistant (MDR) Acinetobacter species in addition to combined intravenous (IV) antibiotic therapy (3). However, chemical meningitis (CM), which mimics bacterial meningitis, can be seen during IT therapy (4, 5). CM is defined as meningitis with negative cerebrospinal fluid (CSF) Gram staining and negative results of CSF cultures plus recovery of a patient with no use of any antibiotic agent after the spinal tap. In this study, we discussed a case of CM which developed during MDR A. baumannii meningitis therapy with IT colistin administration.

A 24-year-old man was presented to the emergency room with blunt head trauma after a motorcycle accident. The patient was conscious and cooperative. There were multiple 3-5 cm lacerations on his face, and he was bleeding from the mouth and nose. The cranial computerized tomography (CT) revealed multiple comminuted fractures in the bilateral maxillafrontal and ethmoid bones. The patient was intubated and sedated and then taken to the intensive care unit.

On the 5th day of hospitalization, ventilator-associated pneumonia developed, therefore, meropenem 1 gr IV t.i.d. (three times daily) was started and given for two weeks. After, the patient was extubated. No growth was detected in the blood and endotracheal aspirate culture. A lumbar drainage catheter was placed when rhinorrhea was detected on the 34th day. Rhinorrhea regressed after the evacuation of CSF with the catheter. Fever, headache and neck stiffness developed on the 39th day. We suspected nosocomial meningitis. Empirical meropenem 2 gr IV t.i.d. and vancomycin 500 mg IV q.i.d. (four times daily) were started as the nosocomial meningitis therapy. Numerous neutrophils were detected in the evaluation of CSF taken 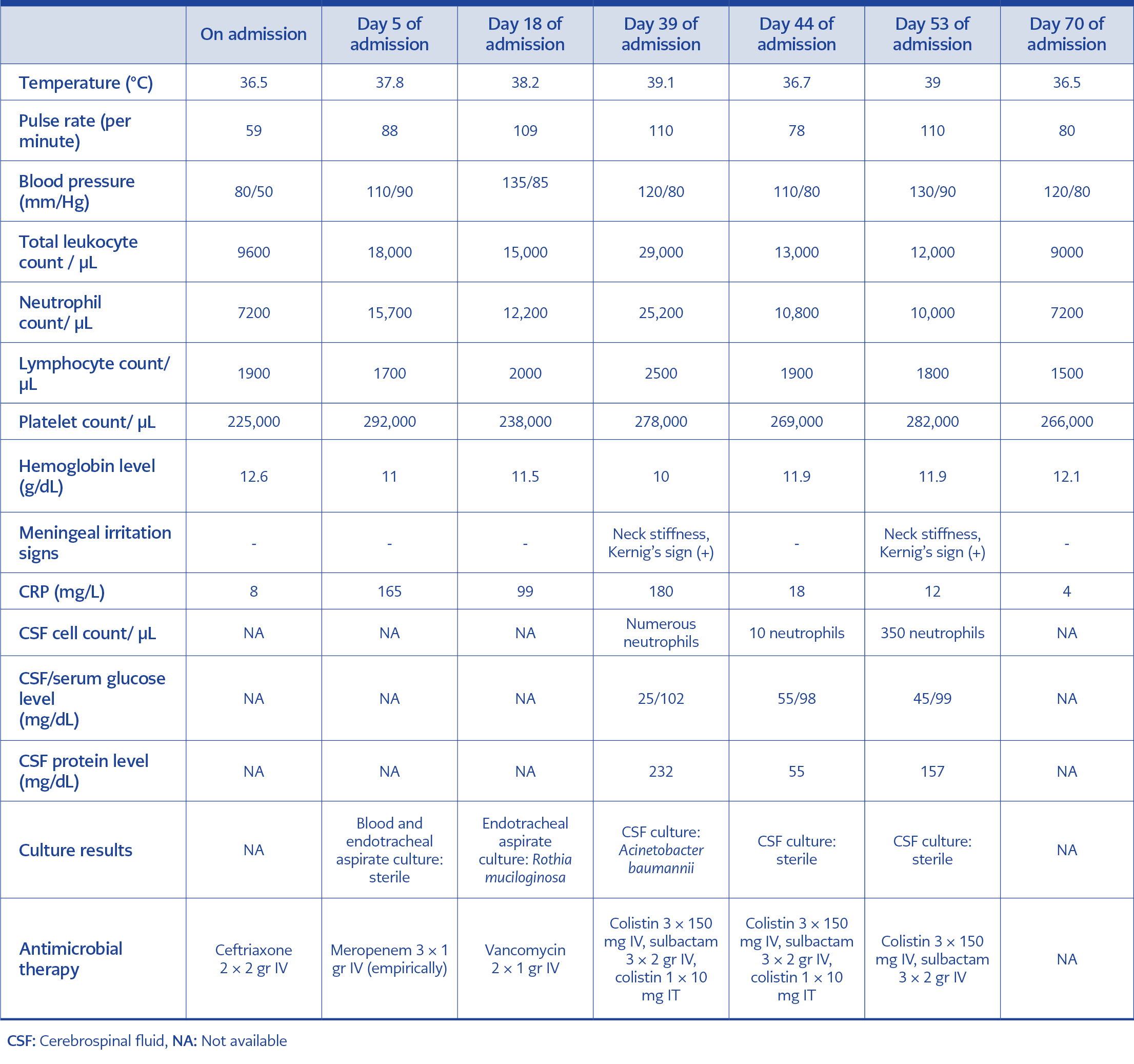 Table 1. Progress chart of the patient during in-hospital stay. 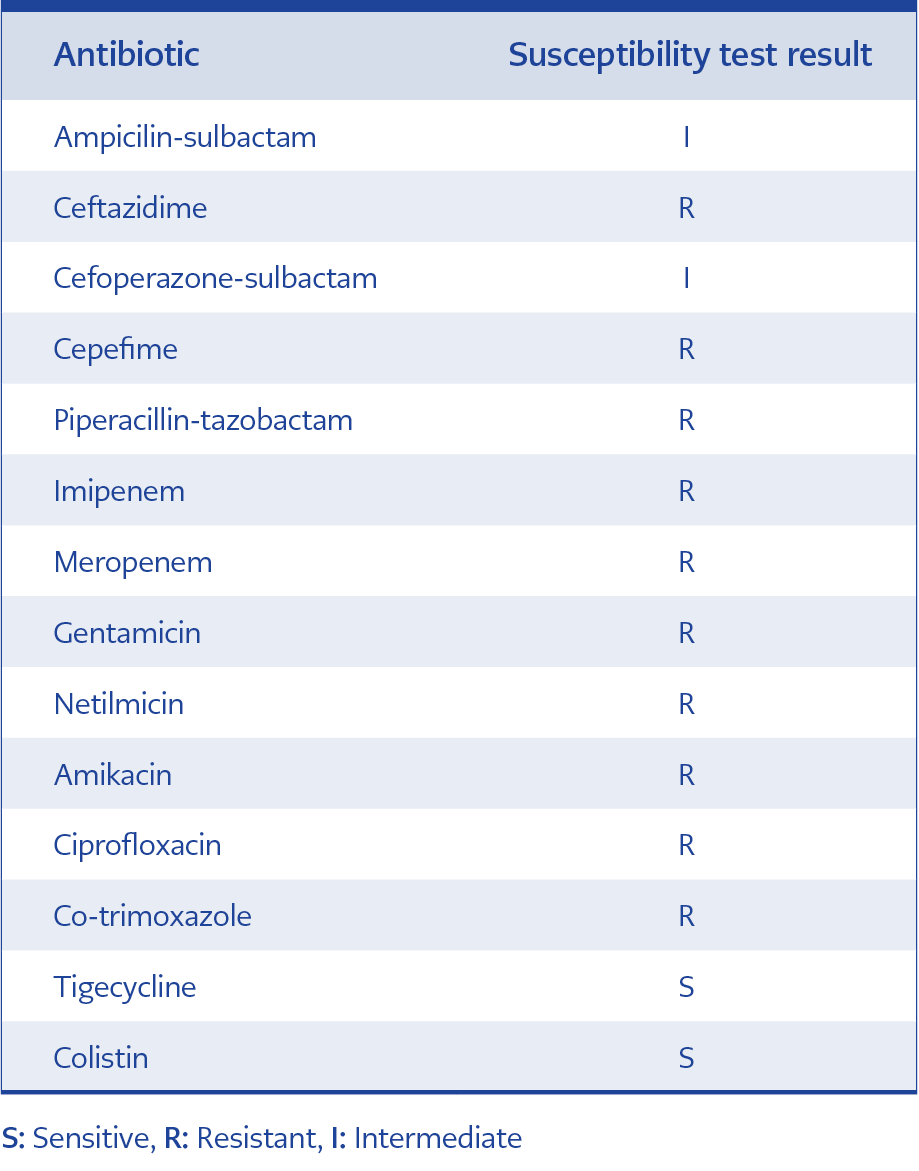 from the lumbar drainage catheter. CSF/serum glucose level was 25/102 mg/dL, serum protein level was 232 mg/dL. Leukocyte and C-reactive protein (CRP) levels in the complete blood count reached higher values of 29,000 cells / µL, and 180 mg / L respectively (Table 1). MDR A. baumannii grew in CSF culture (Figure 1). Colistin 150 mg IV t.i.d., sulbactam 2 gr IV t.i.d. and colistin 10 mg IT q.i.d. was started after taking informed consent from the patient because the bacteria that grew on CSF was resistant to meropenem. The CSF culture was sterile on the fifth day of the therapy and fever was regressed.

Figure 2. The neutrophils in CSF of the patient on Fuchs-Rosenthal counting chamber.

High fever up to 39°C and severe headache were detected during the appropriate antibiotic therapy was in progress on the 14th day of the nosocomial meningitis therapy. No problem was detected in CSF drainage, and the patient was in a stable condition. No pathological finding was detected in terms of abscess and closed focus in cranial and spinal imaging. 350 neutrophils / µL was detected in the CSF of the patient who was suspected of meningitis in the foreground (Figure 2). In addition, the CSF/serum glucose level was 45/99 mg/dL, serum protein level was 157 mg/dL. The patient was suspected of CM due to IT colistin therapy since the CSF cultures were sterile. The patient had not used any other medications that might cause CM during this time. Parenteral colistin therapy was maintained and IT colistin therapy was discontinued. Two days later, the patient’s fever regressed, the neutrophil counts decreased and returned to normal in the CSF during the follow-up. Systemic antibiotic therapy was pursued for three weeks. A dura defect was observed in the left frontal region adjacent to the left ethmoid sinus, and dura repair was performed with craniotomy. The patient was discharged with full recovery after dura repair. No sequelae were detected after A. baumannii meningitis and CM therapy.

Colistin, the best treatment option in nosocomial meningitis developing with MDR bacteria, does not pass the blood-brain barrier well. Markantonis et al. demonstrated that colistin CSF penetration was lower (5%) in cases with no findings of intense meningeal inflammation in their study (10). The comparison of IV and IV + IT (combined) colistin therapies in patients with external ventricular drainage catheter-associated ventriculitis showed that CSF/serum colistin concentration was significantly higher in the patient group who had received the combined therapy. The desired minimum inhibitory concentration level (> 0.5 µg / mL) was reached in the CSF of the patients who received only combined therapy (10).

Various drugs such as NSAIDs, IVIG, anticonvulsants, antibiotics such as co-trimoxazole could cause drug-associated meningitis. This condition usually occurs as an immunologic hypersensitivity reaction (11). Direct meningeal irritation can cause CM with some drugs administered intrathecally. Our patient had used no other medications that might cause meningitis during the diagnosis of CM. The most common adverse effects of IT drug administration have been reported as chemical meningitis, and chemical ventriculitis; in addition, seizures and cauda equina syndrome may also be detected (5, 12). It is essential that CM presents with fever, altered mental state, elevated white blood cell count in the CSF and low glucose concentrations, mimicking bacterial meningitis, the only difference in CM is the presence of sterile CSF cultures. The rate of CM varies between 11-60% with IT colistin therapy. As in our case, researchers in the literature have shown that this side effect is reversible and does not cause mortality. In a recent paper, three of 19 patients developed CM with the administration of IT colistin. The patients’ symptoms were mild and had completely resolved with the improvement of CSF findings within two weeks (13). The therapy may be discontinued or patients can be followed up by reducing the dose or frequency of administration in case of the emergence of CM after IT colistin therapy (4, 5, 14).

CM has been described in the neurosurgical literature since the time of Cushing et al. (16). However, it is not known by many infectious diseases and neurology specialists. There is limited data to help distinguish such patients from those with bacterial meningitis. In a study, the authors reviewed the records of adult patients with meningitis after a neurosurgical procedure to determine the characteristics that might help to distinguish a sterile postoperative CM from bacterial infection. The spinal fluid profiles in bacterial and CM were similar; however, CSF white blood cell count higher than 7500/µL and a CSF glucose level smaller than 10 mg/dL were not found in any case of CM. Patients with CM had no purulent wound drainage or significant wound erythema or tenderness, coma, new focal neurological findings, or onset of a new seizure disorder (16). These results may guide the diagnosis of CM, because the bacterial infection associated with meningitis can yield negative culture results.

CM must be suspected in cases when meningitis patients under appropriate antibiotic therapy and concomitant IT antibiotics have developed clinical and laboratory signs of meningitis again. Differentiation of these situations is important. The close follow-up of the patient and CSF cultures can distinguish CM from relapse or reinfection. CM should be suspected in the patient when sterile CSF culture is obtained. The discontinuation of IT therapy or decreasing the antibiotic dose will be the most appropriate approach to manage such cases.