A 39-year old male patient presented with severe herpes zoster ophthalmicus (HZO) on the left side of his face and developed orbital apex syndrome (OAS) despite systemic valacyclovir therapy. Persistent low vision, ptosis, limitation of extraocular muscle movements, anisocoria, epiphora, and photophobia led to suspicion of OAS. OAS was confirmed by orbital MRI. Intravenous acyclovir and systemic corticosteroids were initiated. Gradual recovery occurred over six months. The patient was seronegative for HIV and syphilis. He reported alcohol consumption for the last few months. This case increased awareness of a rare, but a sight-threatening complication of HZO in an immunocompetent patient.

The severe course of HZO infection might be related to the delay in initiation of systemic antiviral therapy and inadvertent use of corticosteroids.

Orbital apex syndrome should be suspected in patients with HZO who develop signs and symptoms associated with the dysfunction of fifth, third, fourth, sixth cranial nerves, and in particular the optic nerve.

Intravenous acyclovir and corticosteroids are warranted in the immediate treatment of OAS, which is a severe and vision-threatening complication associated with HZO.

Varicella-zoster virus (VZV) is found in worldwide distribution and can lead to two distinct viral syndromes. Primary infection occurs as varicella and is a contagious and usually benign childhood disease (1). Herpes zoster (HZ) presents as unilateral pain in a dermatomal distribution accompanied by a vesicular rash. Herpes zoster generally occurs in older adults and results from the reactivation of latent VZV within sensory spinal or cerebral ganglia (2).

Herpes zoster ophthalmicus (HZO) occurs as a result of HZ involvement of the ophthalmic division of the trigeminal nerve. Involvement of the nasociliary branch of the ophthalmic nerve leads to Hutchinson sign which is characterized by the occurrence of skin lesions at the tip, side, or root of the nose. Hutchinson sign is accepted as a strong predictor of ocular inflammation and corneal denervation in HZO. Herpes zoster ophthalmicus accounts for 10 to 20% of cases of HZ, and therefore, every individual has about 1% risk of developing HZO during lifetime (2).

We herein present an immunocompetent male patient with severe HZO complicated by orbital apex syndrome (OAS), which is a rare and potentially blinding complication of HZO. 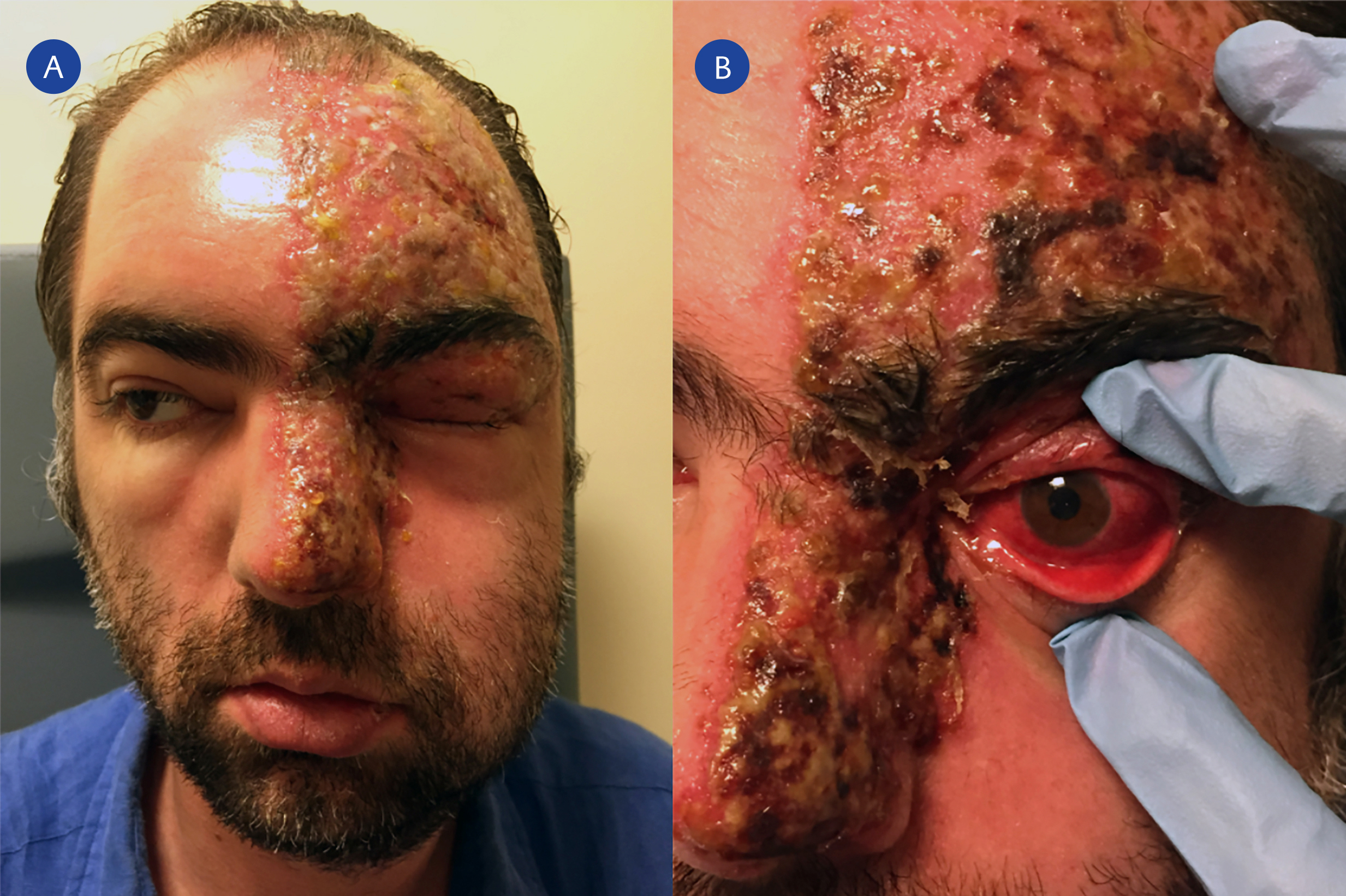 Figure 1. Facial photograph of the patient at presentation shows severe facial edema and drooping and vesiculopustular lesions on frontal and scalp skin, upper eyelid, medial canthus, and root, side and tip of nose on the left side of his face (A). Lesions do not cross the midline. Crusting of the vesicular skin lesions and severe diffuse anterior scleritis is seen in the left eye 2 days after treatment (B).

A 39-year old male patient presented in August 2015 to the Ophthalmology Department with severe facial and eyelid oedema and facial drooping on the left side of his face. An accompanying vesiculopustular rash respecting facial midline was observed on frontal and scalp skin, upper eyelid, medial canthus, and root, side and tip of the nose on the left side of his face (Figure 1A). He was complaining of worsening left-sided headache for eight days and eyelid oedema that started six days ago. He had been given corticosteroid ointment for the diagnosis of contact dermatitis elsewhere. The patient reported moderate alcohol consumption for the last few months; otherwise, his medical and family history was unremarkable.

Ophthalmological examination revealed a visual acuity of 1.0 OD and 0.3, with the pinhole, OS. Biomicroscopy showed severe eyelid oedema, vesiculopustular lesions and madarosis in the left upper eyelid, and vesiculopustular lesions in the medial canthus area skin. Diffuse scleritis, ciliary injection, interstitial keratitis with diffuse corneal stromal edema, medium-sized keratic precipitates, and 2.5 (+) cells in the anterior chamber were observed in the left eye. Biomicroscopy of the right eye was within normal limits. Intraocular pressures were 14 mmHg OD and 10 mmHg OS. The fundus of the right eye was normal, despite limited view, the posterior pole and peripheral retina were normal in the left eye. The patient was diagnosed with HZO and was started on oral valacyclovir 3 g/day and amoxicillin-clavulanate 2 g/day. The topical treatment prescribed for the left eye consisted of ganciclovir 0.15% ophthalmic gel five times per day, topical prednisolone acetate 1% tid, and tropicamide 1% tid. Figure 1B shows crusting vesicular lesions in the distribution of ophthalmic division of trigeminal nerve, with a positive Hutchinson sign on the left side and severe diffuse anterior scleritis in the left eye two days after treatment was initiated. 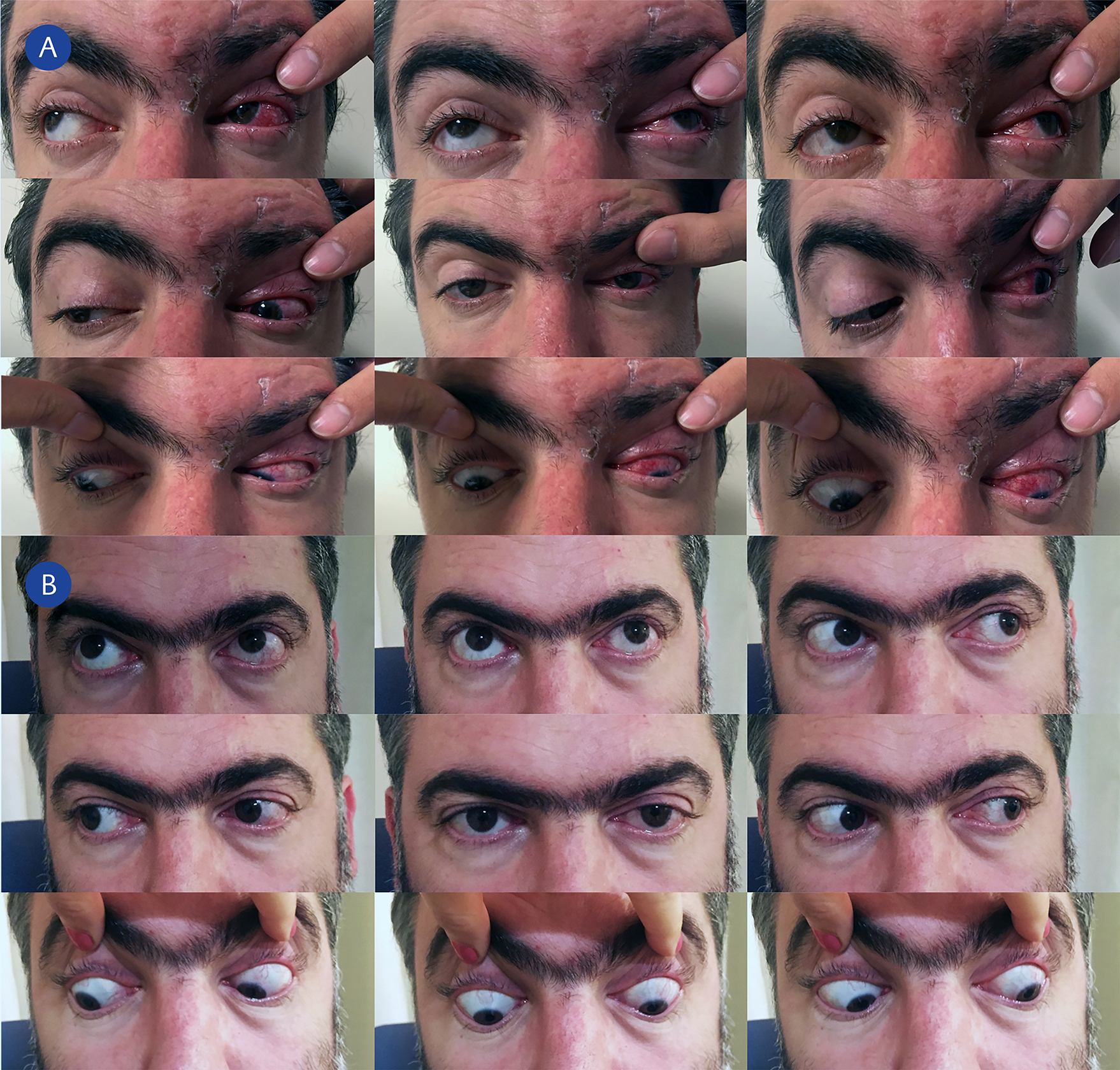 Figure 2. There is limitation in extraocular muscle movements in 6 cardinal directions of gaze and upward and downward gaze in the left eye. The left upper eyelid is being elevated as there is ptosis of the left upper eyelid. Recovery of skin lesions and persistence of scleral inflammation is evident 12 days after oral antiviral treatment began (A). Six months after presentation there is complete recovery in ptosis and in extraocular muscle movements in all directions of gaze in the left eye (B).

Twelve days after presentation, visual acuity remained at 0.7 in the left eye despite regression of keratitis and anterior uveitis and in spite of oral valacyclovir and topical treatment. Because of the persistence of left-sided ptosis despite the recovery of skin and eyelid lesions, limitation in extraocular muscle movements leading to intermittent diplopia upon elevation of the upper eyelid, and epiphora and photophobia when exposed to ambient light cranial and orbital magnetic resonance imaging (MRI) was ordered. The patient was consulted with the Infectious Diseases Department. Figure 2A shows limitation in extraocular muscle movements in all directions of gaze and persistence of diffuse scleritis in the left eye. The patient also had anisocoria, with a left-sided mid-dilated pupil that was unresponsive to light and accommodation. Orbital MRI revealed enhancement and swelling of the left extraocular muscles, enhancement of the left optic nerve sheath, with cerebrospinal fluid invisible along the optic nerve on the left side (Figure 3). The patient was diagnosed with OAS secondary to HZO. Cranial MRI was unrewarding. Serological tests for RPR, TPHA, and anti-HIV were negative. Upon diagnosis of orbital apex syndrome, the patient was switched to intravenous acyclovir 3 g/day. Oral methylprednisolone 64 mg/day (0.8 mg/kg/day) was added to his treatment 24 hours after initiation of intravenous acyclovir. Intravenous acyclovir treatment was given for 15 days, and oral corticosteroids were slowly tapered off over 12 weeks. After completion of intravenous antiviral therapy, the patient was started on oral valacyclovir 3 g/day until oral corticosteroids were discontinued. After that, valacyclovir dose was decreased to 500 mg/day.

Figure 3. Axial magnetic resonance images of the patient taken 12 days after presentation. T2 weighted image shows swelling and edema of the extraocular muscles and optic nerve on the left side. There is no cerebrospinal fluid visible along the optic nerve tract on the left side when compared to the optic nerve tract on the right side (A). Post-contrast T1 weighted fat suppressed image shows enhancement of the extraocular muscles and the optic nerve sheath especially near the orbital apex. A subtle contrast enhancement is also seen within the bony orbital apex (B).

Left-sided ptosis and limitation of extraocular muscle movements gradually recovered over six months (Figure 2B). Oral valacyclovir was discontinued at his final visit in March 2016. Visual acuity of the left eye improved to 1.0. The patient developed faint patchy iris stromal atrophy in the left eye and had two episodes of recurrent anterior uveitis that were treated with topical corticosteroids. Pupillary reactions returned to normal; however, the pupil remained mildly distorted due to pupillary sphincter involvement.

The case reported herein represents HZO complicated by OAS in a patient with full-blown ocular affection, presenting with scleral, corneal, and iris involvement. Orbital apex syndrome is an infrequent but severe and potentially blinding complication of HZO. Herpes zoster ophthalmicus complicated by OAS, which is also known as optic neuritis/neuropathy associated with complete ophthalmoplegia, was first reported by Ramsell in 1967 (3).

To our knowledge there are only limited number of case reports in the literature on the occurrence of OAS as a complication of HZO (3, 13). Orbital apex syndrome may result from inflammatory, infectious, neoplastic, iatrogenic, traumatic, or vascular conditions affecting the orbital apex region. It is characterized by dysfunction of ophthalmic, oculomotor, trochlear, abducens nerves and particularly the optic nerve (14). It has been hypothesized that OAS associated with HZO can be secondary to compression caused by intraorbital inflammation or myositis. A direct viral cytopathic effect caused by viral dissemination from the HZ virus infecting the fifth cranial nerve to the neighbouring cranial nerves in the orbital apex has also been proposed. An immunologically mediated response to the virus might also induce perineural inflammation, peripheral nerve demyelination, contiguous orbital inflammation, cranial vasculitis, myositis, brainstem encephalitis and meningitis (6, 8). We did not observe any symptoms or signs, as confirmed by cranial MRI imaging, that would suggest intracranial involvement in our patient.

The severe course of HZO infection in our patient might be related to the delay in initiation of systemic antiviral therapy, inadvertent use of corticosteroid ointment before the presentation, and moderate alcohol consumption defined as up to two drinks per day for men (15). Otherwise, the patient was immunocompetent.

Orbital apex syndrome should be suspected in patients with HZO who develop signs and symptoms associated with the dysfunction of fifth, third, fourth, sixth cranial nerves, and in particular the optic nerve. Orbital apex syndrome secondary to HZO may develop despite oral antiviral therapy in immunocompetent individuals. Intravenous acyclovir and corticosteroids are warranted in the immediate treatment of OAS, which is a severe and vision-threatening complication associated with HZO.