Fasciola hepatica is a trematode that is visible to the naked eye. The diagnosis can be made by serology or by clinical improvement and decrease of eosinophilia after triclabendazole treatment or by finding parasite eggs in the stool. Sometimes the diagnosis is possible during unnecessary surgery, laparoscopic cholecystectomy, and endoscopic retrograde cholangiopancreatography (ERCP). F. hepatica infection should be considered in patients with typical clinical findings; the elevation of liver enzymes indicating cholestasis, eosinophilia, and characteristic computed tomography (CT) or ultrasonography (USG) findings. Here, we presented a case with the preliminary diagnosis of choledocholithiasis and diagnosed with F. hepatica infection by ERCP procedure.

Although Fasciola hepatica infects sheep and cattle, it can sometimes be an accidental host in humans (1). Clinically, fever, abdominal pain, intermittent jaundice, intrahepatic cystic abscess, eosinophilic cholecystitis, and extrahepatic cholecystitis are seen most frequently (2). The diagnosis can be made by serology or by clinical improvement and improvement of eosinophilia after triclabendazole treatment or by finding parasite eggs in the stool. This case report aims to raise awareness of the diagnosis of F. hepatica infection and reduce unnecessary invasive procedures. 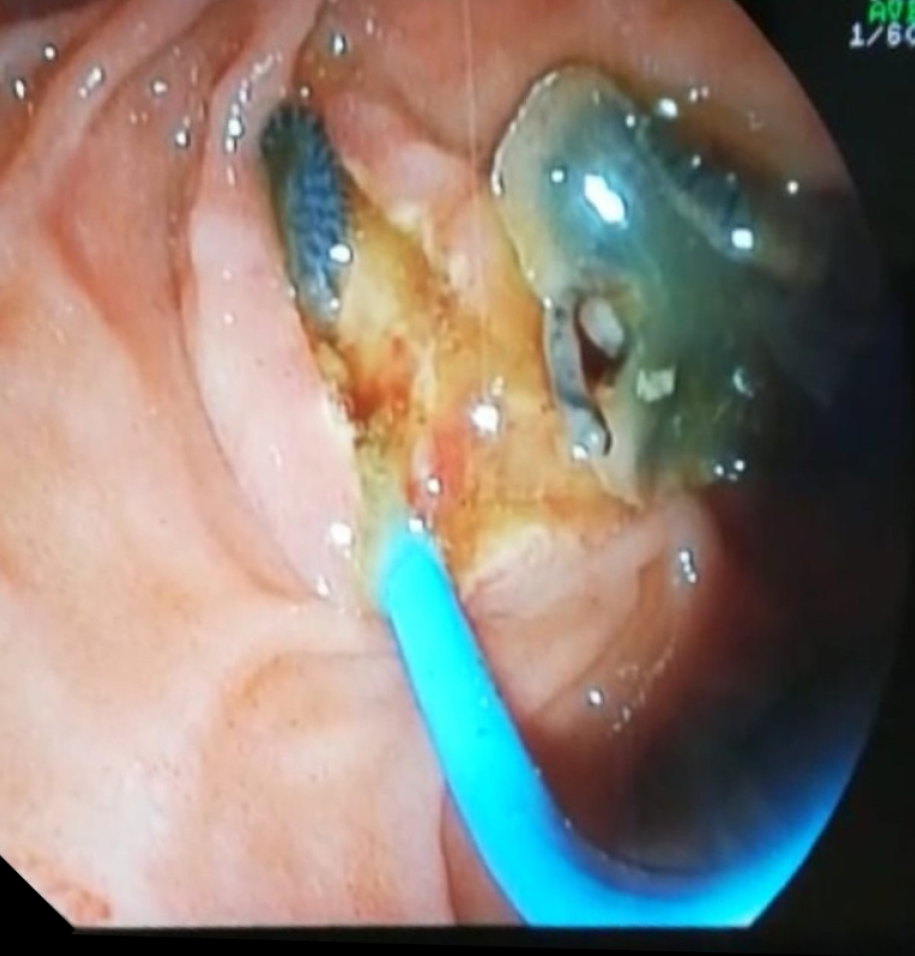 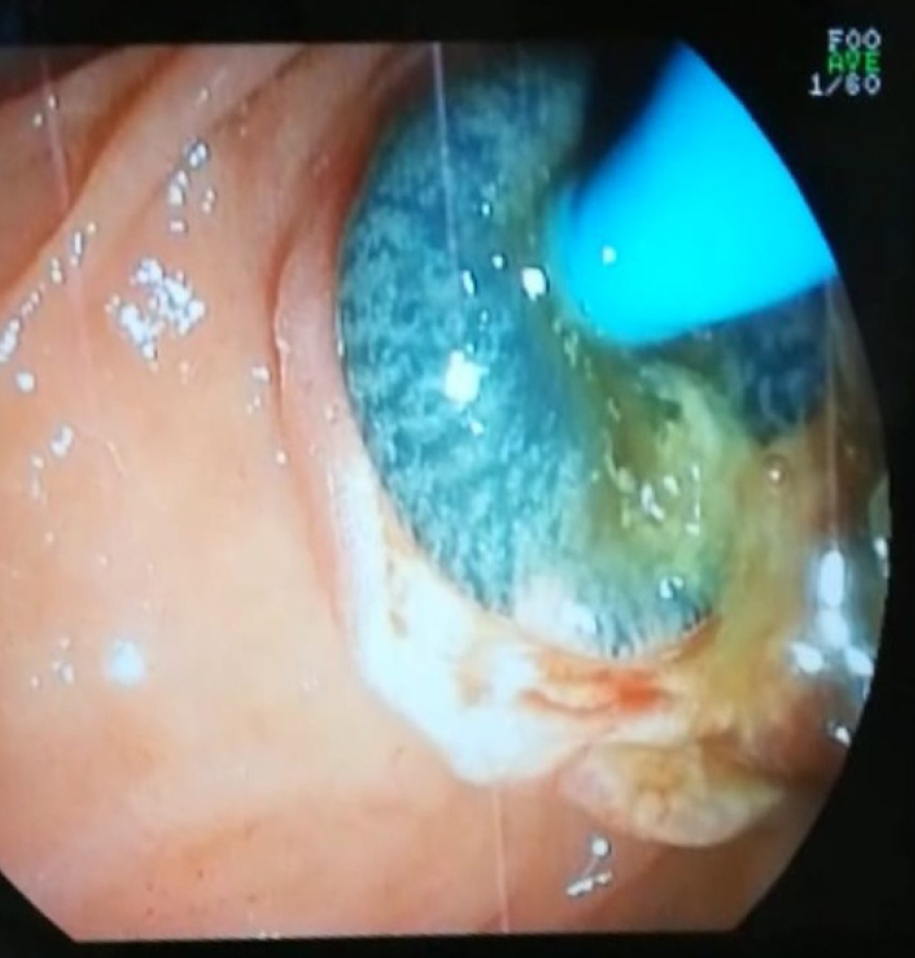 Fascioliasis is a rare parasitic infection that spreads mostly in tropical, subtropical, and temperate climate regions and is frequently reported in countries where sheep and cattle raising is common (3). F. hepatica is endemic to Europe and Asia. It is rarely seen in North Africa, Central and South America, and the Middle East. It is seen sporadically in the USA and the Caribbean Region (1). In six studies reported from different provinces of Turkey, the prevalence of F. hepatica ranged from 0.79-10.3%, which indicated that F. hepatica infection was not rare in our country (4-9).

The disease is divided into two main stages as acute and chronic (2). The acute phase (liver period) appears 3-5 months after the infection. It is the period when the immature forms of the parasite are in the duodenum and try to reach the liver; they finally pass into the bile ducts. During this period, the most common symptoms are fever, abdominal pain, severe anemia, nausea, vomiting, diarrhea, weight loss, urticaria, lymphadenopathies, and arthralgia. Interestingly, there is no hyperbilirubinemia at this stage. Hepatomegaly and eosinophilia are the most common physical examination and laboratory findings (2).

The chronic phase (bile duct period) begins after about the sixth month and is the period when the parasites mature in the bile ducts. This stage can last several years (>10 years), and half of the patients are asymptomatic. In symptomatic patients, upper abdominal pain, intermittent jaundice, intrahepatic cystic abscess with prolonged fever, eosinophilic cholecystitis, extrahepatic cholecystitis (high AST, ALT, GGT, and total bilirubin) may be seen. About half of the patients do not have eosinophilia during this stage. Therefore, the number of eosinophils does not exclude the diagnosis (2). In the case presented here, the parasite was in the common bile duct, and the patient was symptomatic. The patient had symptoms of weakness, nausea, abdominal pain, and signs of extrahepatic cholecystitis and eosinophilia.

The diagnosis of fascioliasis may be missed because of many options for differential diagnoses and low incidence of the infection (10). The differential diagnosis of F. hepatica includes liver abscess, malignancy, viral hepatitis, cholecystitis, cholangitis, ruptured hydatid cyst, toxocariasis, acute schistosomiasis, ascariasis, and strongyloidiasis (1, 11-13). Serology has been the fastest and most effective diagnostic method in the diagnosis of fascioliasis in recent years (1). In the literature, it is stated that the sensitivity and specificity of this method are 78.9-100% and 97%, respectively (14, 15). Antibodies are detectable 2 to 4 weeks after initial exposure, undetectable in approximately 65% of patients one month after successful treatment, but low levels of positive titers may persist in some patients for years (1). A serological test could not be performed in this case because there was no serological test option in our hospital. Stool microscopy is another useful diagnostic method still used to diagnose chronic infections in countries with scarce resources. In the acute phase of infection, there are no eggs in the stool. An adult F. hepatica parasite can lay more than 20,000 eggs per day. Because this release is intermittent, multiple stool samples should be examined (1). In the liver, multiple nodular or irregular lesions with different echogenicity can be seen on USG, and multiple metastasis-like lesions can be seen on computed tomography (CT) and magnetic resonance imaging (MRI). Sometimes the diagnosis can be made during unnecessary surgery, laparoscopic cholecystectomy, and ERCP (2). In a patient with biliary obstruction, ERCP can detect the adult F. hepatica parasite in the biliary tract. In addition, F. hepatica can be identified in open surgical operations and biopsies performed for diagnostic purposes (1). In the case presented here, the sludge that leveled the distal common bile duct was detected by MRCP. ERCP was performed on the patient with a preliminary diagnosis of choledocholithiasis. The diagnosis of fascioliasis was made by the presence of a live F. hepatica parasite at the distal end of the common bile duct during the ERCP procedure. Appropriate treatment for both stages of infection is triclabendazole 10 mg/kg, given in two doses, and its efficacy is 90% (1).

The non-specific clinical manifestation of fascioliasis is one of the difficulties in its diagnosis. Due to overlooking of F. hepatica infection in the preliminary diagnosis and insufficient use of proper diagnostic methods, the cases are usually misdiagnosed as a primary or metastatic liver tumors with abdominal imaging. As a result, invasive procedures and even open surgical operations were applied to the cases for diagnostic purposes, which is unacceptable for the patient and the health system as it brings an economic burden to the country. Therefore, F. hepatica infection should be considered before performing a major surgical intervention in patients with typical clinical findings, the elevation of liver enzymes indicating cholestasis, eosinophilia, and characteristic CT or USG findings, and non-invasive diagnostic methods should be used first.