Clostridioides difficile-associated pseudomembranous colitis (PMC) is a life-threatening inflammatory bowel disease. Here, we aimed to present a 40-year-old woman at 25 weeks of gestation whose pregnancy was terminated earlier than expected. Unfortunately, despite fidaxomicin and oral vancomycin, the patient’s diarrhea did not improve, and she had to undergo a subtotal colectomy. C. difficile infections developing in pregnant women can be catastrophic for both baby and maternal health. Also, antibiotic stewardship is crucial in the prevention of PMC. Therefore, unnecessary and prolonged use of antibiotics should be avoided.

Clostridioides difficile infections (CDIs) can present in various clinical forms, ranging from an asymptomatic carrier state to pseudomembranous colitis (PMC), and are recognized as one of the leading causes of diarrhea in healthcare centers (1). C. difficile-associated PMC is a life-threatening inflammatory bowel disease and may result in emergency surgical procedures after antibiotic use. Common signs and symptoms of PMC include abdominal pain, diarrhea, nausea, and fever. The diagnosis is possible by detection of C.difficile toxins or genetic material of the bacteria. (2). Recurrence rates of CDIs are reported to be 15–20% and may be as high as 60% after three or more infections, with a mortality rate of 5% (1, 2).

Although pregnant women are known as a low-risk group for PMC due to their young age and overall good health, PMC may cause life-threatening problems in pregnant women, and it may be a potential threat to both maternal and fetal health (4).

Here, we aimed to present a 40-year-old, 25-week pregnant woman whose pregnancy was terminated earlier than expected and who had to undergo subtotal colectomy ten days after caesarean section due to multiple perforations at the colonic segments. 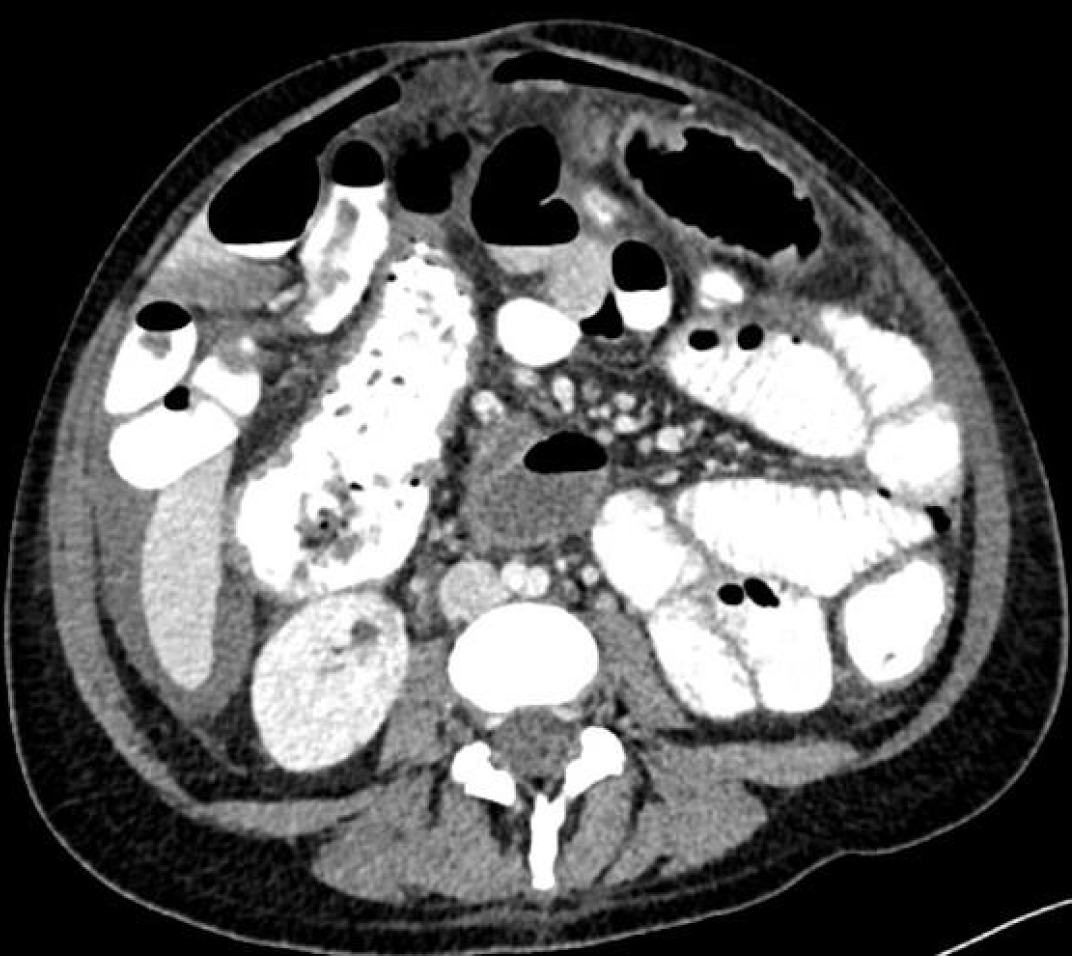 A 40-year-old woman, gravida 1, para 0, with 25 weeks of gestation, was admitted to our gynecology and obstetrics department complaining of abdominal pain. In addition, she complained of frequent watery diarrhea episodes (20 bowel movements per day) lasting for three weeks, accompanied by a 10 kg weight loss and dehydration. She was diagnosed with giardiasis because the antigen test for Giardia lamblia resulted in positive at another hospital. She was given ornidazole treatment for ten days, yet her complaints did not resolve. She had also been given a nitrofurantoin treatment with the diagnosis of urinary system infection, although there was no identifying microorganism in the urine culture.

When admitted to the emergency department, she was evaluated by a specialist in infectious diseases and clinical microbiology. Her vital signs included a temperature of 38°C, blood pressure of 110/70 mmHg, and a pulse rate of 80 /minute. The laboratory tests showed leukocytosis with 12,900 white blood cells mm3 and acute phase reactants like C- reactive protein (CRP) level: 70 (N: 0-5) mg/dL and procalcitonin (PCT) level: 0.58 ng/mL were high. Stool culture, microscopic evaluation of stool, and C. difficile toxin A&B are performed immediately. There was no growth in two sets of blood cultures taken when the patient’s fever was high.  SARS-CoV-2 PCR was repeated twice, and the results were negative.

Stool culture was negative for Salmonella spp. and Shigella spp. CDI was defined according to guideline of The Infectious Diseases Society of America (IDSA) and the Society for Healthcare Epidemiology of America (SHEA); the presence of symptoms (mainly diarrhea) and either a stool test positive for C. difficile toxins or detection of toxigenic C. difficile or colonoscopic or histopathologic findings revealing PMC (5). In our hospital, C. difficile toxin A (TcdA) and toxin B (TcdB) are detected by the VIDAS® method (bioMérieux, Marcy-l’Etoile, France) as part of a two-step algorithm. In the first step, a product of C. difficile, glutamate dehydrogenase (GDH) performed via enzyme-linked immunofluorescence assay (EIA). Then, the detection of C. difficile TcdA and TcdB was performed directly on the stool using premier toxins A and B according to the manufacturer’s instructions. In our case, both GDH and TcdA were positive in the stool with the enzyme-linked fluorescent assay (ELFA) test and by PCR.

She had given oral vancomycin 4×125 mg immediately. However, her diarrhea had not resolved, so her treatment changed to oral fidaxomicin, and she was discharged.

Four days later, TcdA, checked at the outpatient clinic, tested positive for the second time. She had been hospitalized again because she was dehydrated. Oral fidaxomicin was stopped, and oral vancomycin 4×125 mg and IV metronidazole 4×500 mg were started. On the first day of her second admission, she was taken to the operating room for a cesarean section because of membrane rupture and cervical dilatation. She gave birth to a preterm infant in her 28th week of gestation. Her baby, whose body weight was 1230 gr, was admitted to the neonatal intensive care unit.

On the third day of her admission, the stool toxin assay for TcdA tested negative. The gastroenterology department consulted the patient, whose diarrhea continued despite toxin negativity, to exclude other accompanying intestinal pathologies. A colonoscopy was performed, considering chronic inflammatory bowel disease as an underlying condition since her diarrhea continued for over three weeks. The flexible sigmoidoscopy was preferred with no air insufflation to avoid perforation of the inflamed colon. In the colonoscopy, widespread diffuse ulcerations and mucosal loss consistent with PMC were seen in all colon segments and rectum. Multiple biopsies were performed. The pathology report was also consistent with pseudomembranous pancolitis and came out negative for cytomegalovirus (CMV) infection. Meantime, CMV DNA PCR was also negative in blood tests.

On the tenth day of her admission, the patient complained of severe abdominal pain. Her physical examination was remarkable for diffuse rebound tenderness in all four quadrants, consistent with the acute abdomen diagnosis. Her CRP level was 173 mg/L, and her leukocyte count was 11,820 K/uL. Abdominal computed tomography (CT) scan showed free fluid and air consistent with perforation of hollow viscus with pancolitis. The abdominal CT image taken after colon perforation is given in Figure 1. She was urgently taken to the operating room; in the exploratory laparotomy, more than five perforated segments were detected in the colon. Subtotal colectomy with an end-terminal ileostomy was performed. The macroscopy of the colon removed in operation is shown in Figure 2. In pathological examination (acute pancolitis; perforation, multiple small ulcerations, pseudomembranous formation, in some parts showing findings of ischemic and hemorrhagic damage) was evaluated. She was taken to the intensive care unit in the immediate postoperative period, and her meropenem and metronidazole treatment was continued.

The patient is still being followed out. Her ileostomy was closed. Her son is 16 weeks old with a body weight of 7520 gr. Both the patient and her son are healthy. 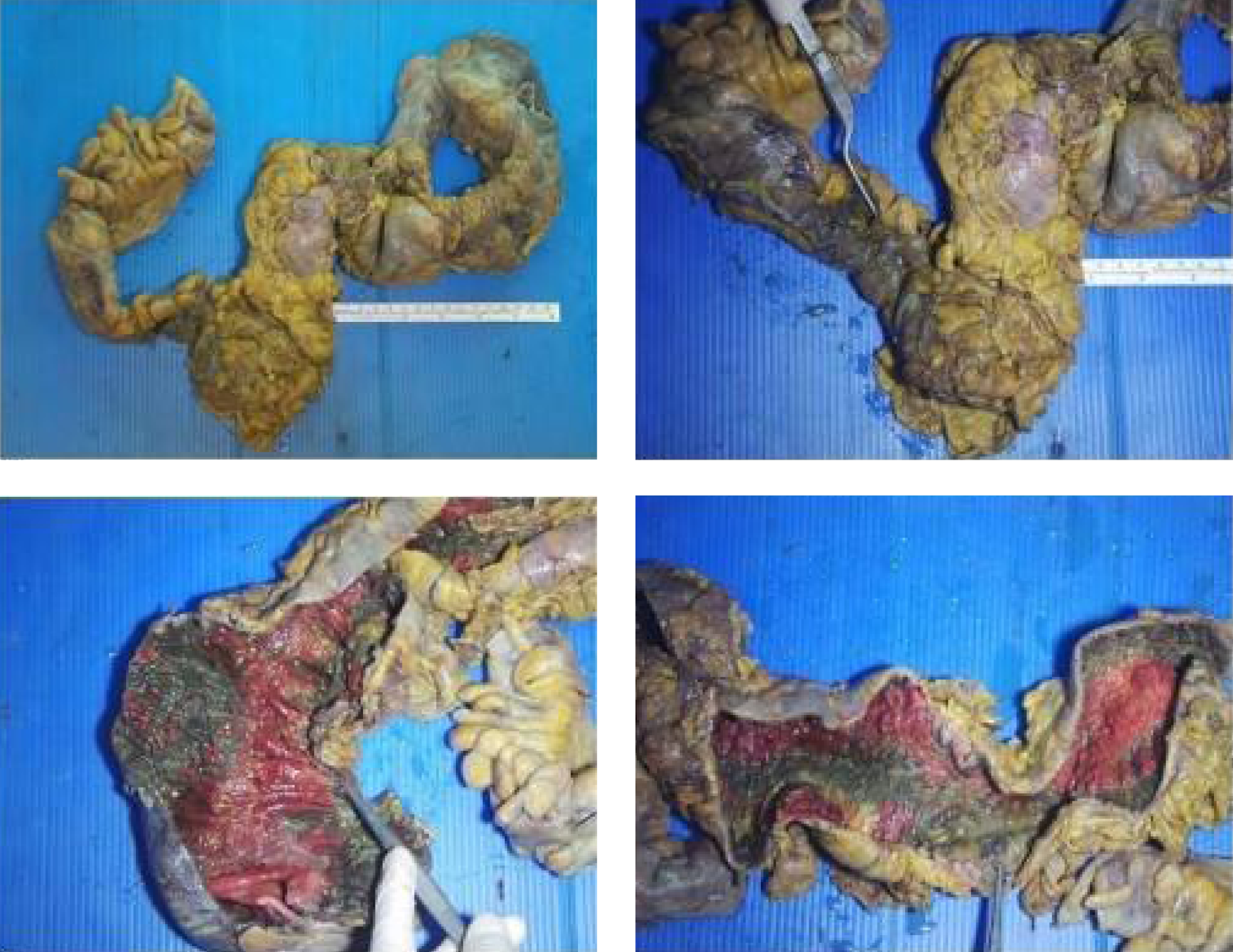 Figure 2. The macroscopy of the colon.

A 25-week pregnant woman whose pregnancy was terminated early because of PMC due to C. difficile colitis and had to undergo emergent subtotal colectomy is presented here. Although publications emphasized that CDIs pose an increased risk in pregnant women, especially after cesarean section, diagnosis during pregnancy may increase morbidity and mortality of both mother and baby (4, 6).

The risk factors associated with CDIs include age over 65, female gender, chronic bowel inflammatory diseases, obesity, prolonged hospital admissions, antibiotics disrupting the normal microbiome, and the surgery itself (7). Our case had no risk factors other than antibiotic use for the last two weeks. There was no previous history of antibiotic-associated diarrhea. A study including 2671 pregnant women revealed two risk factors for CDI, cesarean section delivery and the use of antibiotics, especially ampicillin/ gentamicin/clindamycin (8). The increase in the CDIs may also be attributable to the inappropriate use of antibiotics, gastrointestinal flora disorders leading to microbial flora change, and non-compliance with infection control measures, especially hand hygiene, environmental cleaning, and disinfection (1). Different antibiotics were given before the infectious disease diagnosis was clarified in our case.

Clinical findings associated with CDIs can range from asymptomatic carrier stage to life-threatening toxic megacolon. PMC is the most known form of CDIs, characterized by yellow plaques composed of small ulcerations of mucous membranes. Signs and symptoms of PMC include abdominal pain, frequent watery diarrhea, and dehydration (14). Our patient had acute diarrhea with abdominal pain and relevant risk factors, including recent antibiotic use. Laboratory diagnosis of CDI requires demonstrating C. difficile toxin(s) or detecting toxigenic C. difficile organism(s). Nucleic acid amplification tests (NAATs) for the diagnosis alone or initial EIA screening for GDH antigen and toxins A and B is recommended (2). In our patient, C. difficile toxin(s) tested positive in the stool three times with ELFA.  After toxin negativity was detected in the patient, a colonoscopy was performed, considering chronic inflammatory bowel disease as an underlying condition since her diarrhea continued and enteritis lasted longer than three weeks. The flexible sigmoidoscopy was preferred with no air insufflation to avoid perforation of the inflamed colon.

If possible, the first step in managing CDI is to discontinue any precipitating antibiotics (15). Although the use of antibiotics carries a risk for the development of CDI, antibiotics are used in managing and treating these patients. The recommended first-line antimicrobials for the treatment of CDI are oral vancomycin (125 mg 4 times a day for ten days) and oral fidaxomicin (200 mg two times daily for ten days). In patients with recurrent CDI episodes, fidaxomicin is suggested rather than a standard course of vancomycin in the latest guidelines (16). Oral vancomycin was given to our pregnant patient at the first admission, and when there was no clinical regression and the toxin relapsed in the test, she was switched to fidaxomicin. For patients with multiple recurrences or in severe disease with toxic megacolon, characterized by hypotension or shock, ileus oral vancomycin and metronidazole combination treatment is recommended (2). Fecal microbiota transplantation is a promising option in severe patients with fulminant colitis (5).  Despite fidaxomicin, the patient’s diarrhea did not improve. Although it is stated as the first-line treatment in current guidelines, it has been emphasized that the response to fidaxomicin is insufficient in severe and recurrent cases. Although fidaxomicin is offered as the first choice in treatment, it has also been shown to be resistant (16). So oral vancomycin with the combination of metronidazole was given. Meropenem treatment could not be stopped because colon perforation developed in the patient.

Surgical therapy is generally considered in patients with “fulminant” C. difficile colitis who have hypotension or shock, ileus, or megacolon (2). Fulminant C. difficile colitis only occurs in 2 to 3 percent of patients with a CDI but accounts for the most severe CDI complications such as ileus, colonic perforation, and death (17). Our patient had severe abdominal pain and abdominal distension ten days after the cesarean section. Colon perforation was diagnosed with an abdominal CT scan. Since the mortality of patients in this population continues to be high (20-85%), patients should be monitored very closely, and the timing of emergency surgery is critical (18). By following our case closely, we noticed the perforation in the early period.

Subtotal colectomy remains the procedure of choice in fulminant infection, perforation, and colon necrosis (19). Our case was also taken to an emergency operation, and a subtotal colectomy with a terminal end ileostomy was performed. Eight antepartum and six postpartum CDI cases were seen in France between 2008 and 2013. Because pregnant patients have multiple risk factors, including hospitalization, antibiotic use, and comorbidities, they are not in the low-risk group as before (20).

In our case, CDI was the first attack, and there was no serious underlying problem. However, she could not be managed despite her premature birth and effective medical treatments. After the perforation, she was treated with immediate surgery.

In conclusion, it should be kept in mind that severe CDIs developing in pregnant women can be catastrophic for both baby and maternal health. Also, antibiotic stewardship is crucial in preventing PMC, so unnecessary and prolonged use of antibiotics should be avoided.