A nulliparous previously healthy pregnant woman who suffered from postpartum spinal epidural abscess due to Streptococcus agalactiae which probably evolved during delivery.

We describe a woman who suffered from a postpartum spinal epidural abscess because of Streptococcus agalactiae (GBS), which probably evolved during delivery.

To our knowledge, the last reported case of GBS epidural abscess in a postpartum woman was reported in 1997 by Jenkin G et al. (2). We report an additional case of this uncommon condition. 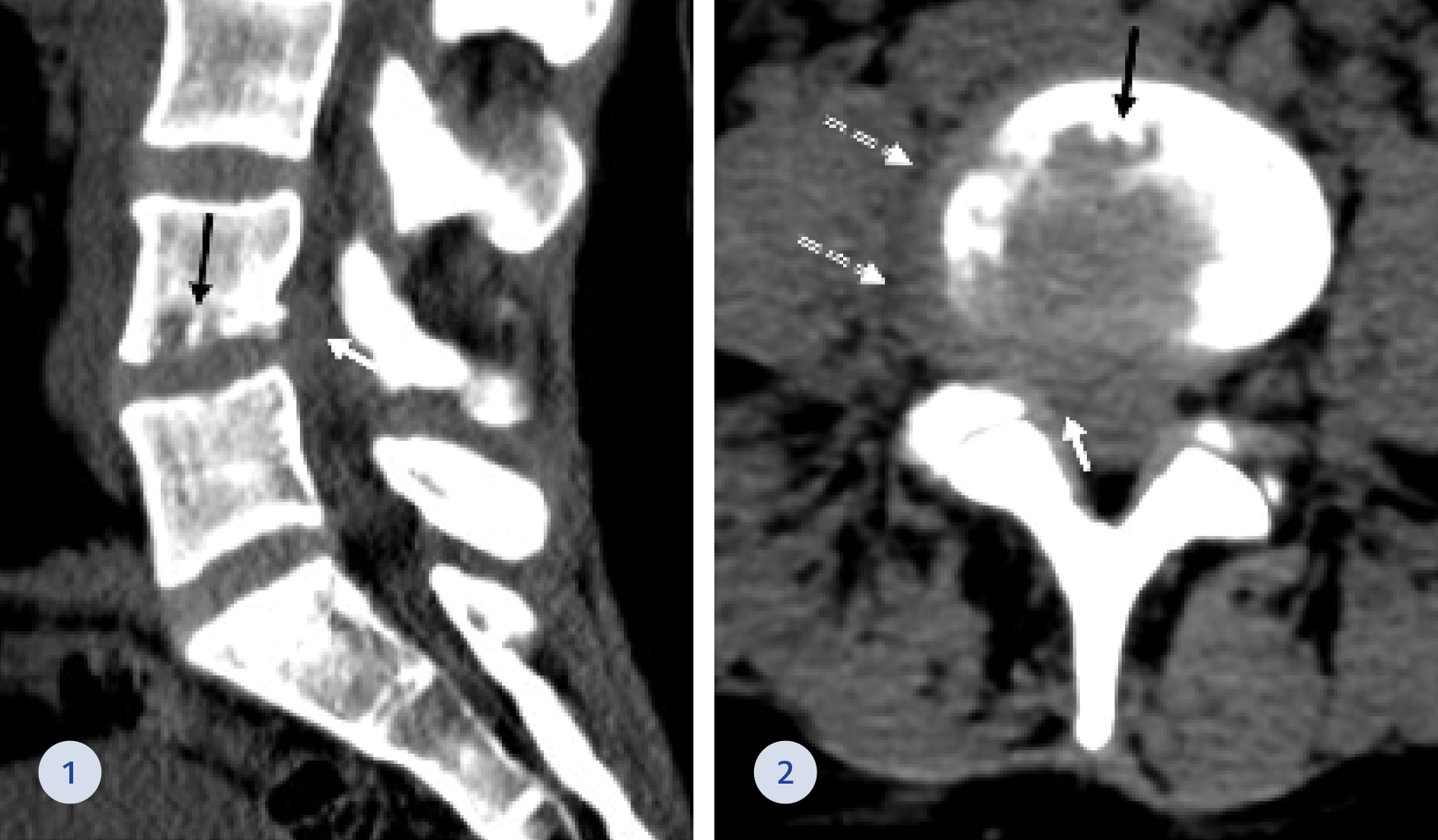 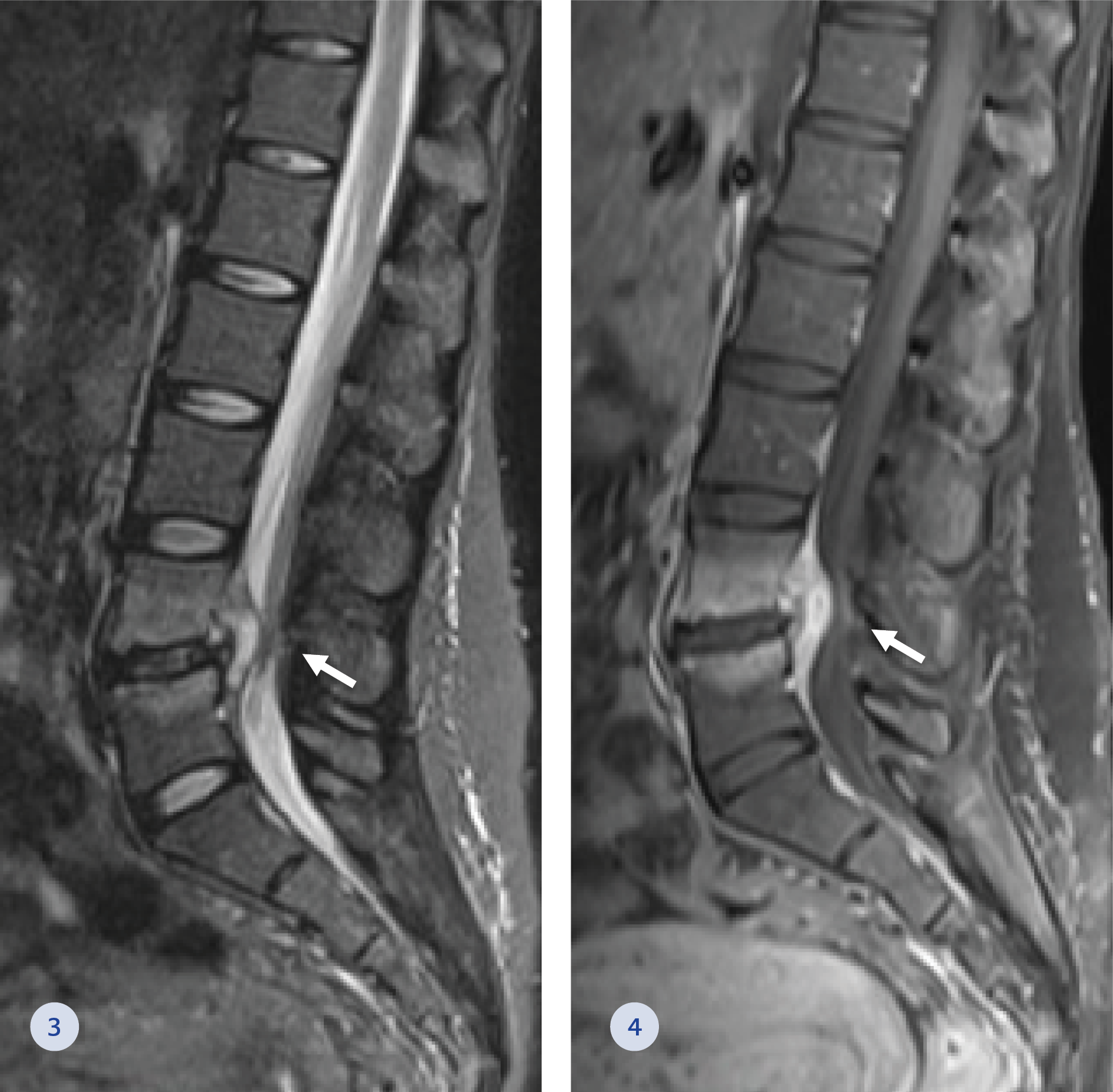 A 29-year-old nulliparous healthy pregnant woman began suffering from fluctuating low-back pain since the fourth month of her pregnancy. She delivered uneventfully at gestational week via vaginal birth, without the use of epidural anaesthesia.

Three weeks after the delivery, she presented to the emergency department (ED), complaining of low back pain radiating to the right leg. She had neither fever nor motor weakness, sensory disturbance or sphincters incontinence.

The postoperative course was uneventful. The patient was treated with intravenous ceftriaxone and continued treatment with continuous Penicillin G, 20 million units daily for six weeks via a peripherally inserted central catheter (PICC line). Complete recovery of symptoms was observed at a follow-up visit three months later.

Spinal epidural abscess is a rare but serious condition causing significant morbidity and mortality. It usually progresses from backache and focal vertebral pain, with tenderness on percussion to nerve root pain, manifesting with radiculopathy, paresthesia, or both, followed by spinal cord dysfunction, characterized by defects of motor, sensory, or sphincter function and paraplegia. The diagnosis, however, may be easily missed because the classic triad of back pain, fever, and neurologic deficits is seen in the minority of patients (3). Most cases of hematogenous dissemination to the spine from foci elsewhere in the body have been associated with an identifiable risk factor, mainly diabetes mellitus, obesity, chronic steroid use, chronic kidney disease, malignancy and alcoholism. (4). Staphylococcus aureus is the most common causal pathogen in cases of spinal epidural abscess, whereas GBS is a rare cause of vertebral osteomyelitis and spinal epidural abscess (1,5–7). GBS is a common colonizer of the genital area or lower gastrointestinal tract. The main concern of such carriage is a maternal-to-infant transmission that occurs in utero by the ascending route or delivery time. Nevertheless, as our patient demonstrated, pregnant women who are carriers of GBS might also be at an increased risk of spread from the genitourinary system to the spine. Normal bone is highly resistant to infection. The seeding of the bacteria into the vertebra was most likely caused by trauma during the child delivery. As the baby passes through the canal, micro and macro trauma may lead to haematogenous systemic spread leading to the spinal canal. This concern is particularly noteworthy because GBS infection incidence in adults has increased in the past few years (8). It is important for the obstetric community to be aware that treating the GBS antepartum may prevent such seeding.

Our case demonstrates the importance of maintaining a high index of suspicion for disc space infection in case of peripartum acute back pain, particularly in women with known urogenital colonization by a potential pathogen.