Central nervous system nocardiosis is rare but has high morbidity and mortality. Immunocompromised patients who have malignancies such as lymphoma, infections such as human immunodeficiency virus (HIV), and bone marrow or solid organ recipients are particularly vulnerable to infection. However, here, we present a patient who developed nocardiosis and recurrent brain abscesses despite having no immunodeficiency problems. The abscess recurred despite total abscess excision and parenteral therapy. After nocardiosis was diagnosed, intravenous treatment with imipenem and amikacin was initiated. The patient was discharged on oral doxycycline. In our immunocompetent case, the abscess recurred four times, resulting in death.

Central nervous system nocardiosis is rare but has high morbidity and mortality. Nocardia is found in soil, decomposing vegetation, and other organic matter, as well as in water as saprophytes. The infection usually occurs through direct inoculation of the microorganism from a skin injury or via inhalation.  The pulmonary form most commonly involves the central nervous system and is characterized by multiple abscesses.  Immunocompromised patients who have malignancies such as lymphoma, infections such as human immunodeficiency virus (HIV), and bone marrow or solid organ recipients are particularly vulnerable to infection.  However, it may also occur in healthy people. We present a patient who developed nocardiosis and recurrent brain abscesses despite having no immunodeficiency problems.

A 60-year-old woman presented to the emergency department with a 10-day history of worsening headache and a 3-day history of nausea and vomiting. At admission, her body temperature was 36°C, and her physical examination was unremarkable. On laboratory examination, the white blood cell (WBC) count was 10,000/μL, polymorphonuclear leukocyte (PNL) count 8750/μL, hemoglobin 12 g/dL, thrombocyte count 342,000/μL, C-reactive protein (CRP) 33 mg/L (0-3.5 mg/L), and procalcitonin 0.05 ng/mL.

Three months before the current admission, the patient had been admitted to another center with a cough and had been assessed for malignancy with positron emission tomography/computed tomography (PET/CT). PET/CT showed two masses; one in the right suprahilar region measuring 21×25 mm and the other in the right frontal lobe of the brain measuring 23×25 mm. In addition, bronchoscopy revealed white vegetation with regular borders protruding from the front wall in the right lobe orifice.  Pathological examination of the mucosal bronchial tissue showed mixed-type inflammation rich in PNLs. Acid-fast staining (AFS) of the bronchoalveolar lavage (BAL) sample was negative. 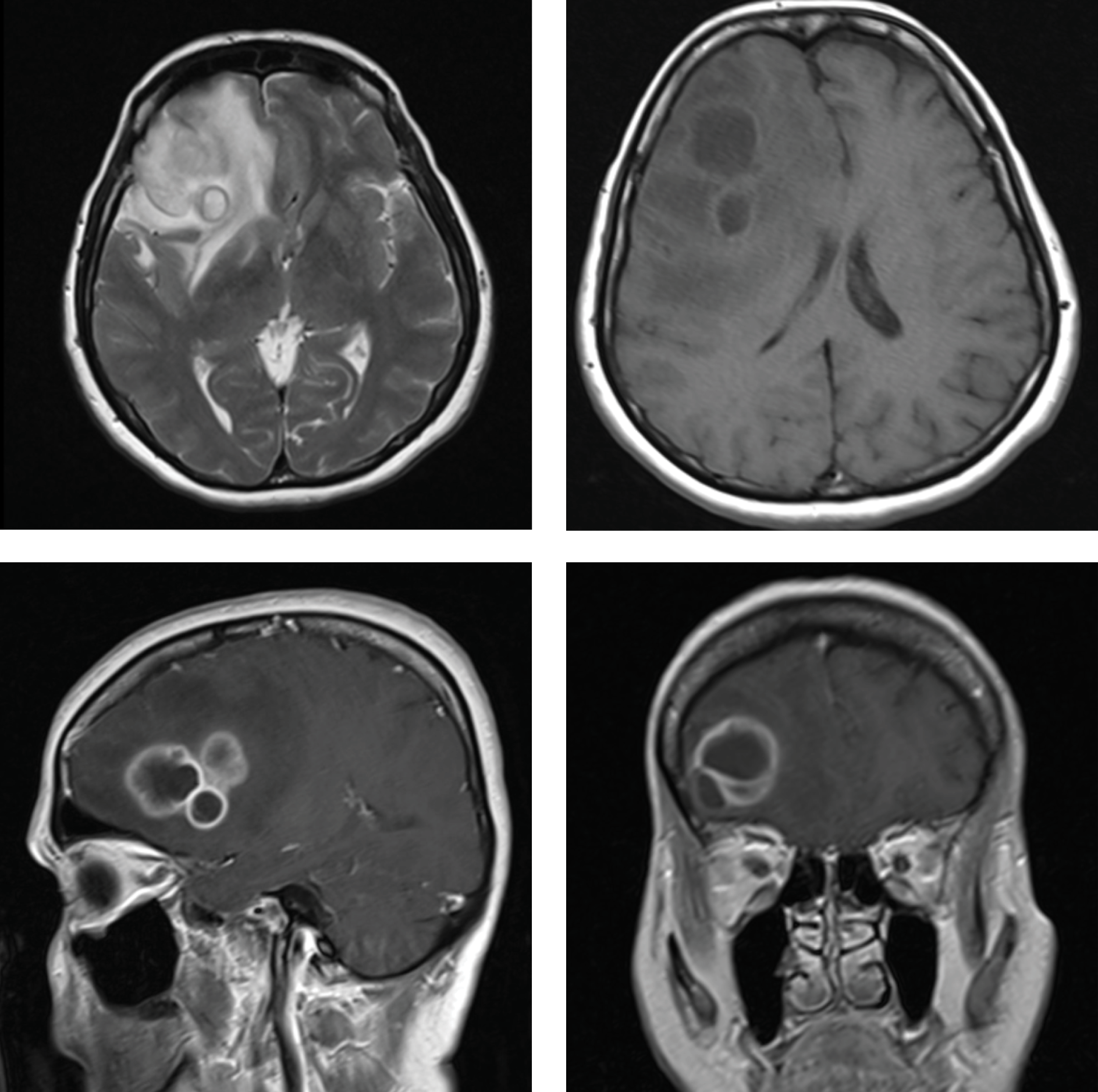 Figure 1. The axial, coronal and sagittal MRI scans showing an abscess in the right frontal region of the brain.

At the current admission to the emergency department, magnetic resonance imaging (MRI) revealed a lesion with a lobular contour in the antero-lateral part of the right frontal lobe of the brain, 47×37 mm in diameter, with peripheral enhancement (Figure 1). The patient was admitted to the neurosurgery clinic for a right frontal craniotomy. Four days after admission, the encapsulated abscess was totally removed. Perioperative cultures grew no microorganism, and histopathological findings were compatible with an abscess. A repeat cranial MRI showed no residual lesion.  Three days after surgery, the patient was transferred to the infectious disease clinic, where she received antibiotic treatment for the brain abscess with meropenem at a dose of 2 g three times daily. On day 13, her headache worsened, and a cranial MRI revealed a recurrent abscess, 35×26 mm in diameter, at the same site. Her abscess was drained in the neurosurgery clinic. The patient underwent further systemic examinations.  Transthoracic echocardiography showed suspicious vegetation, but it could not be visualized on transesophageal echocardiography. Otolaryngologic 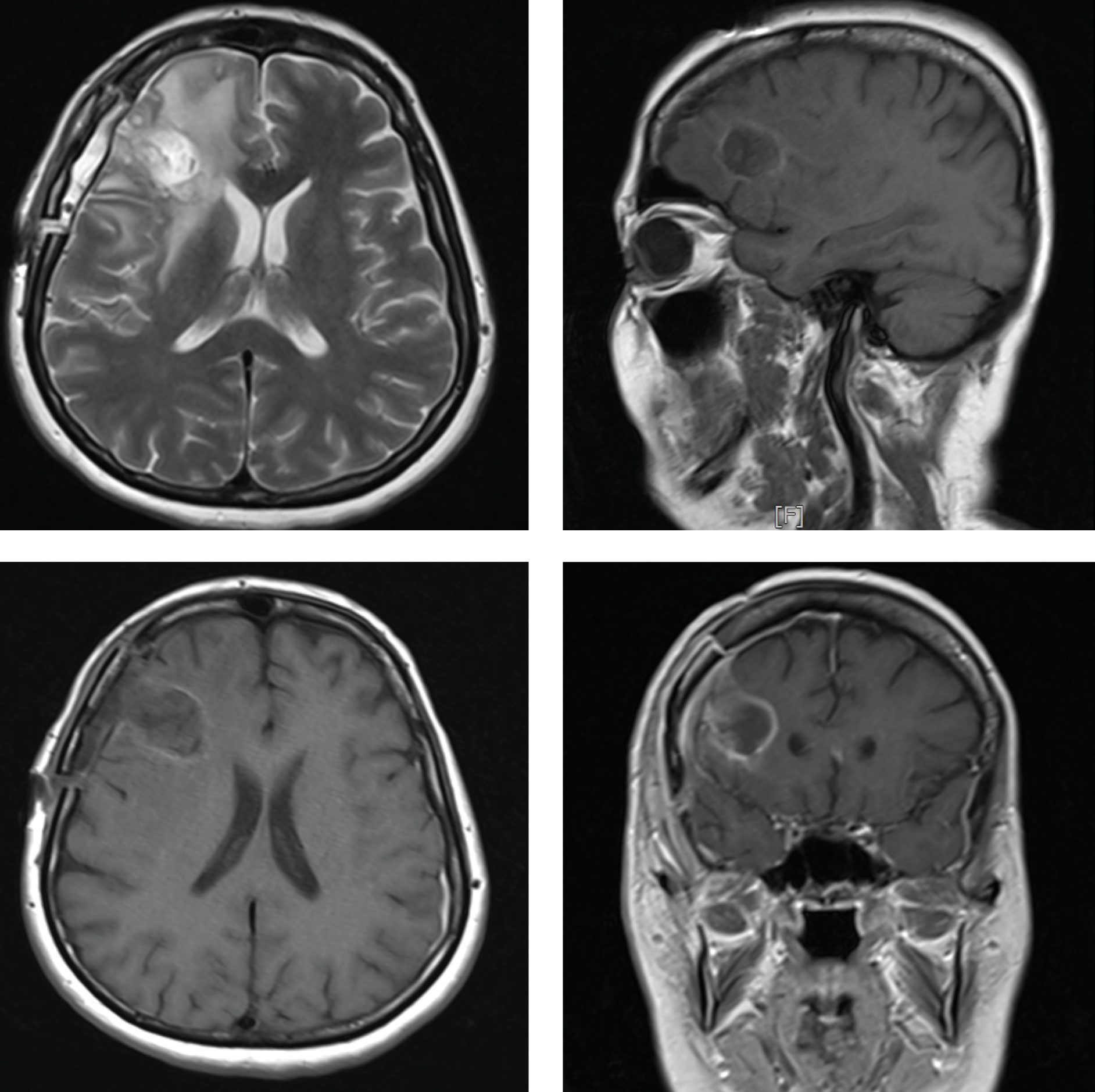 Figure 2.Postoperative axial, coronal and sagittal MRI scans showing the recurrent abscess in the same area of the brain.

and dental examinations and abdominal ultrasonography were unremarkable. After completing a six-week total parenteral antibiotic therapy, the patient was discharged on oral amoxicillin-clavulanate and metronidazole.

At a follow-up visit two months later, a new abscess, 23×20 mm in size, was detected at the same site, and the patient was readmitted (Figure 2). The abscess was drained, and parenteral therapy was initiated with meropenem (2 g three times daily) and vancomycin (2 g twice daily). Three weeks later, the patient was discharged on oral antibiotic treatment.

On antibiotic susceptibility testing, the pathogen was resistant to trimethoprim-sulfamethoxazole but susceptible to imipenem and ceftriaxone. Intravenous treatment with imipenem (500 mg four times daily) and amikacin (500 mg twice daily) was initiated. After six weeks of parenteral treatment, the patient was discharged on oral doxycycline. In our immunocompetent case, initially, Nocardia was not diagnosed, so the abscess recurred four times. Despite appropriate antimicrobial therapy after diagnosis, she died in the seventh month of treatment.

Permission was obtained from the patient’s husband for the article’s publication.

Nocardia spp. can cause either localized or disseminated infection. The pathogen lives in a wide range of environments. Infection usually occurs directly through inhalation or inoculation on the skin. Although infection often requires an underlying immunosuppressive situation, such as lymphoma and other malignancies, and bone marrow or solid organ transplantation, it can also occur in healthy people (1-5).

The most common clinical form is pulmonary nocardiosis. Extrapulmonary nocardiosis is less common and is characterized by hematogenous spread and abscess formation. Central nervous system (CNS) is the most common extrapulmonary involvement; CNS infection occurs in approximately one-third of all cases (1-6). PET/CT showed two masses in our patient’s suprahilar region and right frontal lobe of the brain.

Although clinical manifestation commonly includes focal neurologic findings, non-focal findings can also be seen (7). Nocardial brain abscesses cannot be macroscopically differentiated from brain abscesses. Differential diagnoses should be made for other diseases, such as pyogenic abscess, fungal abscess, tuberculosis abscess, and inflammatory granulomas (8).

The diagnosis is made upon the growth of the microorganism on culture. In case of clinical suspicion of infection, the microbiology laboratory should always be informed because the microorganism can be overlooked during routine laboratory procedures. The growth of Nocardia spp. in culture may take from 48 hours to several weeks (1, 5, 9,10). There was no growth in the first cultures of our patient. Possible causes of culture negativity in the case may be antibiotic use, not being suspicious, and not allowing enough time for culture. Unknown antibiotic sensitivity at the beginning may be the possible cause of recurrence in the case. Medical therapy is always possible for a small-size brain abscess, less than 2 cm in diameter. In our patient, surgery was performed because it was larger than 2 cm in diameter. Surgical intervention, including aspiration, is required if the clinical condition worsens and the lesion does not become smaller despite treatment within one month, or the lesion is larger than 2.5 cm (11). The selection of antimicrobial therapy, dosage, and duration depends on the location, the infection’s severity, and the result of susceptibility testing. Antibacterial agents that show in vitro activity against Nocardia spp. are trimethoprim-sulfamethoxazole (TMP-SMX), amikacin, amoxicillin-clavulanate, ceftriaxone, ciprofloxacin, clarithromycin, imipenem, linezolid, and minocycline. Resistance rates to TMP-SMX range from 3% to 10%; in our patient, the pathogen was resistant to TMP-SMX (12).

Parenteral administration is preferred for initial treatment in life-threatening conditions; however, the selection of antibiotics is still based on susceptibility test results (5, 11, 13).

Surgical drainage of abscesses may help accelerate the response to treatment. The duration of treatment varies depending on the clinical condition. CNS infections are treated for at least 12 months (13). Long-term antibiotic treatment is warranted to prevent relapses (5, 14). Our patient was admitted to the hospital because of a worsening in general condition while the treatment was ongoing,  and she died in the seventh month of treatment.

Central nervous system nocardiosis is rare but has high morbidity and mortality. It should be noted that Nocardia infection can also occur in immunocompetent individuals.

Informed Consent: Informed consent was obtained from patient’s husband for the article’s publication.

Acknowledgements: The authors thank Dr. Fatma Kaya for the identification of Nocardia spp.