A Rare Presentation of Leptospirosis: Dysarthria and Guillain-Barré Syndrome

Leptospirosis can present with severe cases such as polymyositis, peripheral neuropathy, and rarely, Guillain-Barré Syndrome (GBS). This paper reports a case who presented with dysarthria and GBS. A female patient presented with complaints of weakness, dizziness, diarrhea, and dysarthric. Her assessments included muscle strength globally 4/5 and deep tendon reflexes as hypoactive. An electromyographic examination was performed with the increase of weakness in the lower extremities, which indicated findings compatible with GBS. Antibodies against Leptospira biflexa serovar Patoc 1 at 1/400 titer were detected in the microscopic agglutination test (MAT). Neurological involvement in leptospirosis cases can range from meningoencephalitis to GBS.

Leptospirosis is one of the zoonotic infections seen in Turkey. Most cases demonstrate a mild clinical course, and the disease is self-limiting. Complaints such as fever, headache, myalgia, nausea, and vomiting are the most common reasons for presentation (1-4). Severe cases can have polymyositis, liver involvement, icterus and renal failure, aseptic meningitis, or peripheral neuropathy (1, 2, 5). Rare cases may develop intra-alveolar hemorrhage, myeloradiculopathy, cerebellar dysfunction, uveitis, or Guillain-Barré Syndrome (GBS) (5-7). This case presentation reports on a case with Weil’s disease who presented with dysarthria and severe myalgia and was diagnosed with GBS, and we aimed to draw attention to the rare neurological involvement in the course of the disease. 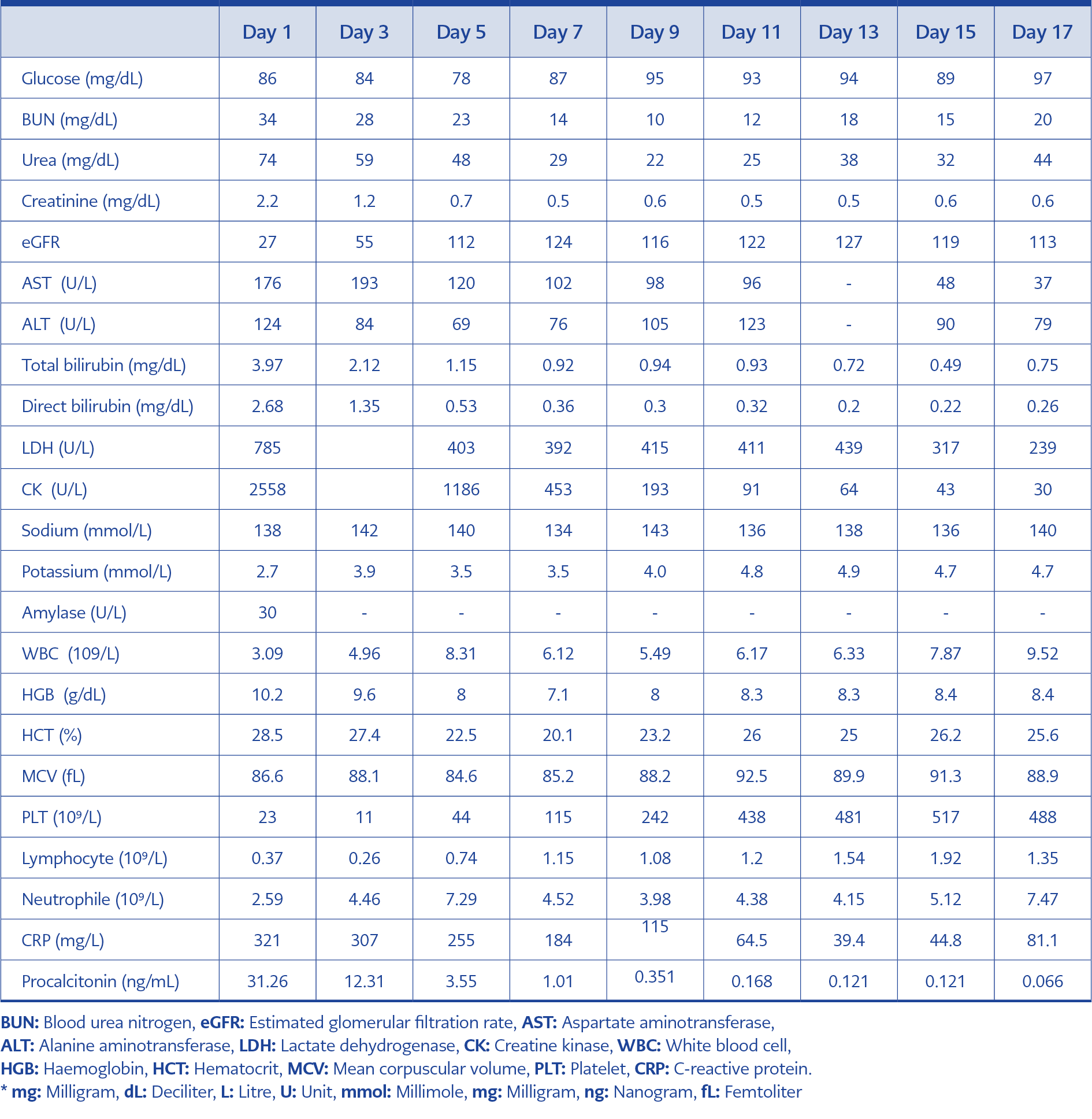 A thirty-nine-year-old female patient presented with fever, weakness, dizziness, nausea, and diarrhea for the last three days. We hospitalized her because of fever, widespread muscle pain, inability to walk, and speech disorder. The patient, who lived in a city center, reportedly had visited a village three weeks earlier.

Physical examination indicated her fever was 39°C, and her orientation and cooperation were intact. No neck stiffness was detected. She had dysarthria and widespread muscle pain restricting her movements even in bed and increasing with palpation. She had mild icterus of sclera on the skin. A neurological examination indicated that her speech was markedly dysarthric. Muscle strength examination was 4/5 at the top and 3-4/5 at the bottom. Deep tendon reflexes were hypoactive. The cranial and spinal magnetic resonance imaging for speech disorder and paraparesis indicated no pathology. No lumbar puncture could be performed because of low platelets. Follow-up findings revealed an increase in paraparesis in the lower extremities (2/5) and the disappearance of deep tendon reflexes. Electroneuromyography (ENMG) was planned due to the diagnosis of acute polyneuropathy. ENMG performed during the second week of hospitalization indicated findings consistent with acute motor axonal polyneuropathy, so the patient was considered to have GBS. Table 1 summarizes the laboratory findings of the follow-up. The complete urinalysis revealed hematuria and proteinuria. TORCH infectious and hantavirus serology, Rose Bengal test, and Brucella Wright agglutination were negative. Blood and urine cultures showed no microorganisms. There was no pathology finding in abdominal ultrasonography.

Empirical ceftriaxone treatment was initiated following hospitalization. At the 48th hour, we discontinued ceftriaxone and started meropenem treatment because there was no change in the clinical picture and the fever was around 40°C. The patient’s fever continued for five days. On the fourth day, kidney functions returned to normal.  Then the patient had a period of polyuria, which lasted eight days. The microscopic agglutination test (MAT) indicated an antibody at 1/400 titer against Leptospira biflexa serovar Patoc 1. On the sixth day of the treatment, dysarthria improved, muscle pain regressed, and the patient started to stand and take a few steps. Antibiotic treatment was completed in ten days. Rapid improvement of the picture for GBS was noted, so no additional treatment such as intravenous immunoglobulin or plasmapheresis was administered. The patient was discharged on the 15th day of hospitalization as she was able to walk without support, and her acute renal failure completely recovered. The patient’s neurological findings were improved completely in the outpatient clinical control performed 15 days after the discharge.

Leptospirosis may present with different clinical pictures ranging from the asymptomatic (anicteric) form (85-90%) to the ictero-hemorrhagic form (Weil’s disease), which can be mortal.

Our case presented with dysarthria and GBS, which are rarely reported in the course of leptospirosis, and showed a course in icterohemorrhagic form characterized by liver involvement and acute renal failure (ARF). ARF picture improved with appropriate antibiotic treatment and hydration before the development of the need for hemodialysis.

GBS is also an infrequent complication of leptospirosis. The annual incidence rates of GBS are reported to be 1 to 2 per 100,000 (12, 13). It generally develops as a result of demyelination and axonal damage caused by the autoimmune response targeting spinal nerve roots and peripheral nerves due to the molecular similarity of pathogenic microorganisms. Clinical presentation includes symmetrical, progressive muscle weakness. Muscular weakness may involve walking difficulties or complete paralysis of the entire limb, face, and respiratory muscles. It usually starts from the distal of the lower extremities and progresses proximally. Deep tendon reflexes cannot be assessed. Campylobacter jejuni infection is one of the most frequently defined causes of GBS (14). Cases with GBS have also been reported in the course of leptospirosis (1, 15).

Cerebrospinal fluid (CSF) examination helps the diagnosis of GBS by the detection of an increase in the protein level without an increase in the cells in CSF (albuminocytological dissociation). However, in the first week of the disease, CSF findings may be normal. Our patient did not undergo a lumbar puncture due to the low platelet count. Electromyography (EMG) is the most appropriate diagnostic method at that stage. The subtypes of GBS include acute inflammatory demyelinating polyneuropathy (AIDP), acute motor and sensory axonal neuropathy (AMSAN), acute motor axonal neuropathy (AMAN), and Miller Fisher syndrome. A case of GBS has been reported in the AMSAN subtype due to Leptospira spp (8). In our case, EMG was used in the diagnosis of GBS, and GBS was defined in the AMAN subtype as a result of EMG.

The case of Leptospira spp. infection with dysarthria and GBS,  was completely resolved with treatment. Leptospirosis should be considered in patients presenting with fever and neurological findings.